Ian Nepomniachtchi now has a mammoth 1.5-point lead with just four rounds of the FIDE Candidates to go after making a draw in Round 10, while Fabiano Caruana self-destructed against Jan-Krzysztof Duda and was caught by both Hikaru Nakamura, who beat Alireza Firouzja, and Ding Liren, who won a fantastic game against Richard Rapport. 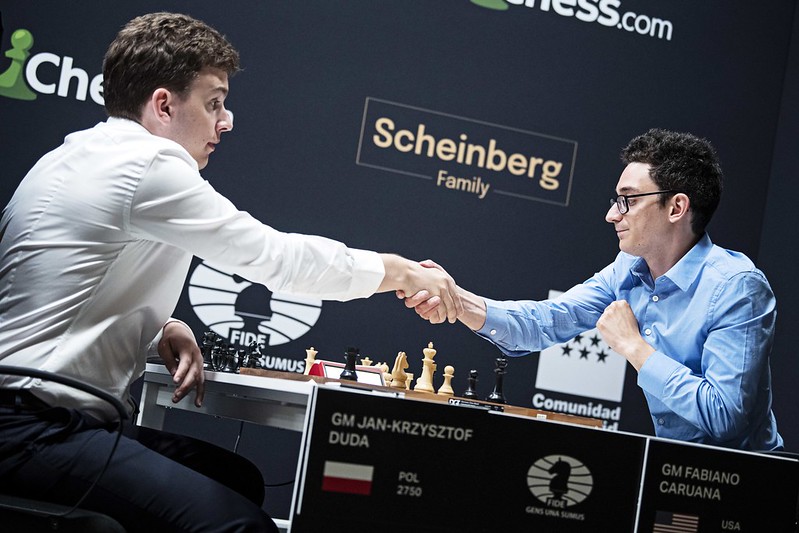 You can replay all the games from the 2022 FIDE Candidates Tournament in Madrid using the selector below.

And here's the day's live commentary from Judit Polgar and Jan Gustafsson.

Go Premium during the Candidates and get 50% off using the voucher code CANDIDATES2022 — a 1-year membership comes with a free Candidates mug!

It was now or never for many of the players in Madrid, and that produced no less than three wins in Round 10. 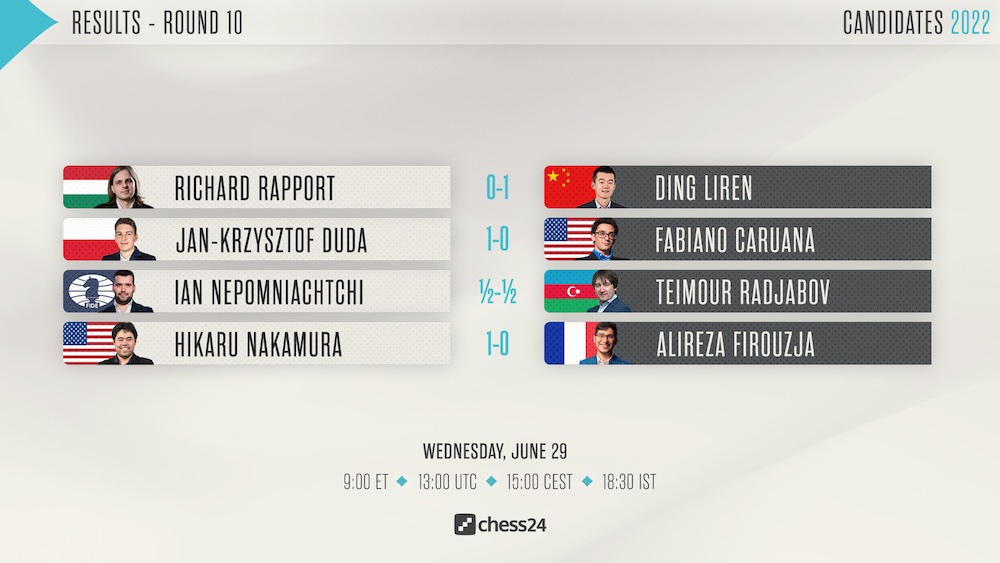 Anish Giri once more recapped the action — you can also check out his separate Candidates course on Chessable: chessable.com/candidates

Anish was willing to put everything on the line to back up his conviction that Ian Nepomniachtchi would make a draw with the white pieces against Teimour Radjabov.

For a while it seemed that Nepo, already on +4, might have chances for more, but things soon fizzled out into a draw by repetition.

When asked how satisfied he was with the game, Ian replied:

I’m most satisfied that it’s only four rounds to go — that’s the only thing which really warms my heart!

Nepo’s calm approach was absolutely justified by the mayhem that ensued elsewhere. 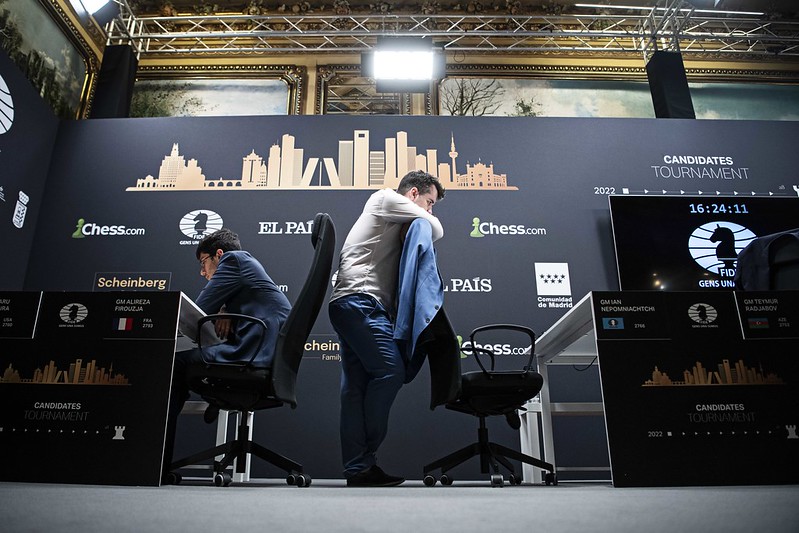 Ian Nepomniachtchi is getting ever closer to a 2nd Candidates win in a row | photo: Stev Bonhage, FIDE

Fabiano Caruana was taking on Jan-Krzysztof Duda, who was winless and had lost three of his last four games. It was understandable, therefore, that Fabi went for a very sharp line in the Italian, but when he was all but forced to play 16…Na5 it was already clear something had gone badly wrong.

Once again, Anish was the harbinger of doom.

A move later 17.Qa2 g5?! was throwing more wood on the fire, and soon Duda was completely winning, with the knight dimmer and dimmer on the rim on the wrong side of the board.

Fabi is a fighter, however, and eventually got back into the game, with some help from his opponent missing clear wins. Duda recovered in time, however, and found a star move just before the time control. 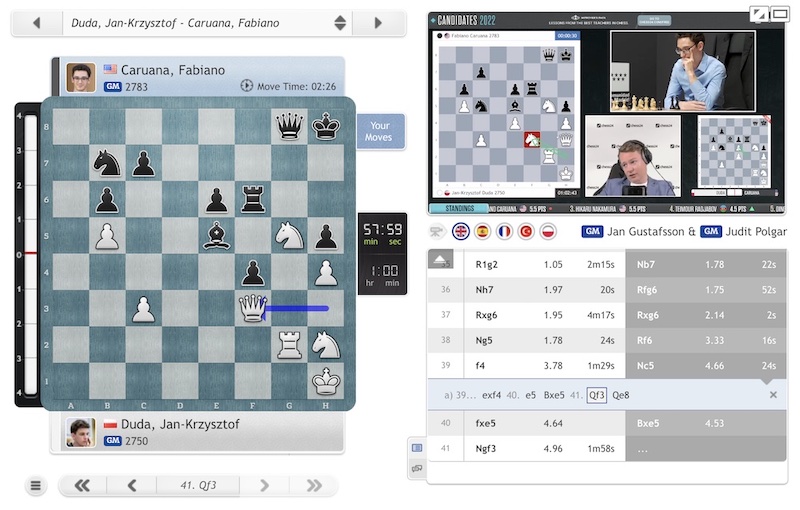 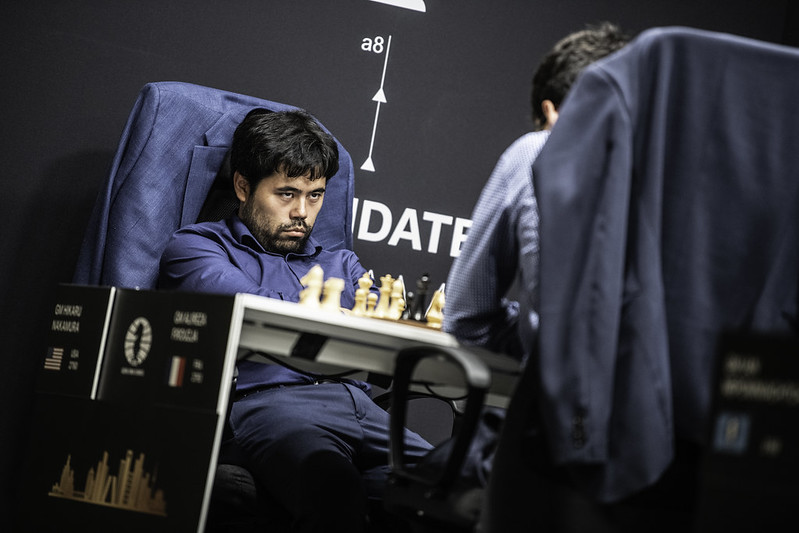 Hikaru was able to take full advantage of Alireza's ambition.

Hikaru once again recapped the game.

That seemed to end any small hopes of a successful outcome to the tournament for Alireza. 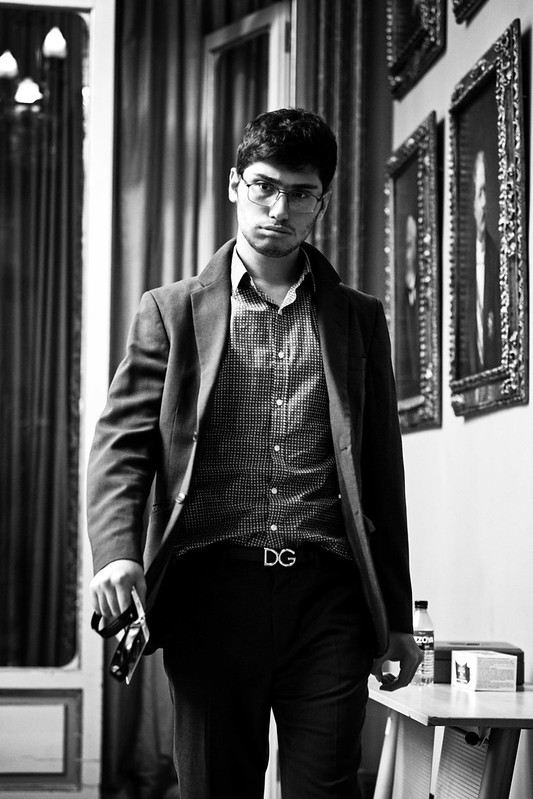 Alireza's opponent in Round 11? Ian Nepomniachtchi! 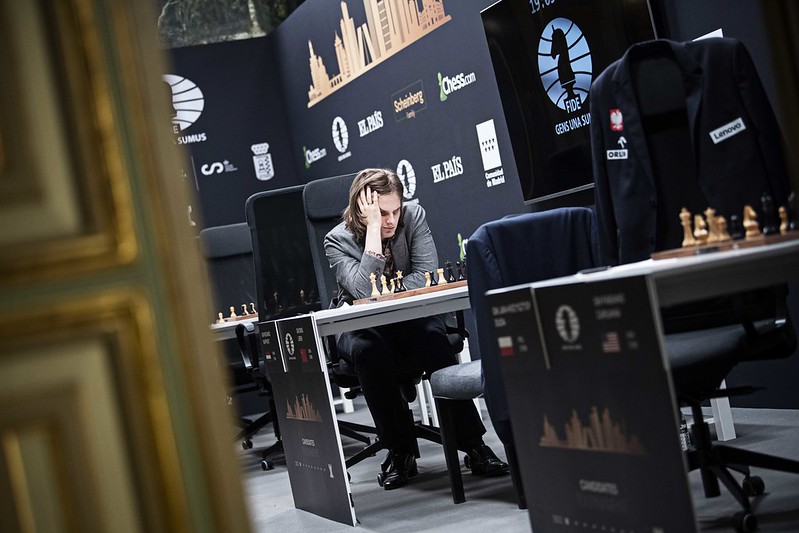 Rapport did almost everything right, but he came up against a Ding Liren finally in top form | photo: Stev Bonhage, FIDE

The remaining game was something of a tragedy for one of the players, since Richard Rapport played a full part in an extraordinary game against Ding Liren. The Chinese no. 1 wove some magic in the early middlegame.

I know this idea Rb8, Rb7 and the idea is just to delay castling, and the game just went as I wished.

The balance was never seriously upset, even when Richard played perhaps the move of the day, a wild piece sacrifice!

33.Nc4! was an amazing resource, and after 33…bxc4 34.dxc4 Black has to decide how to give back material, since c5 and Bxe5 is threatened.

Ding admitted to having been surprised:

The Chinese no. 1 stayed icily cool, however, playing 34…Rc6! and allowing White to win the exchange with 35.Ba4.

The players reached the time control with the computer assuring us it was equal, and in the end Richard really only missed one move. 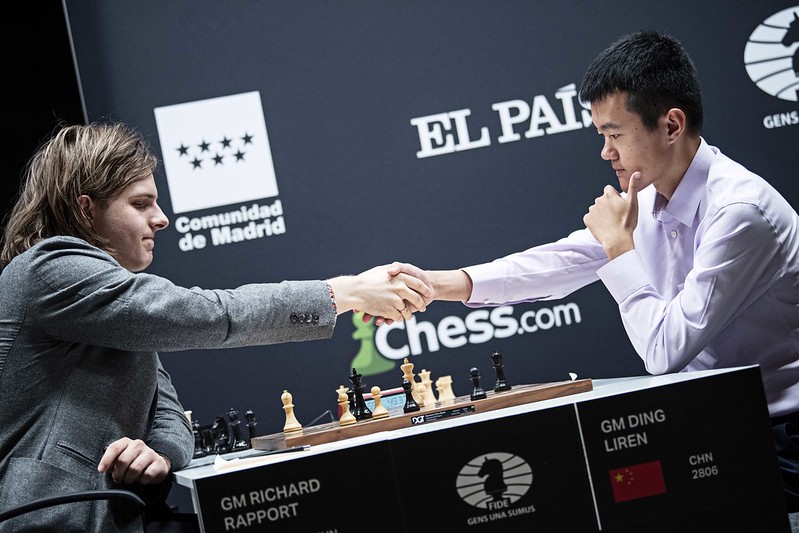 So an incredible day has left Ian Nepomniachtchi cruising on 7/10, while three players are tied for 2nd place. 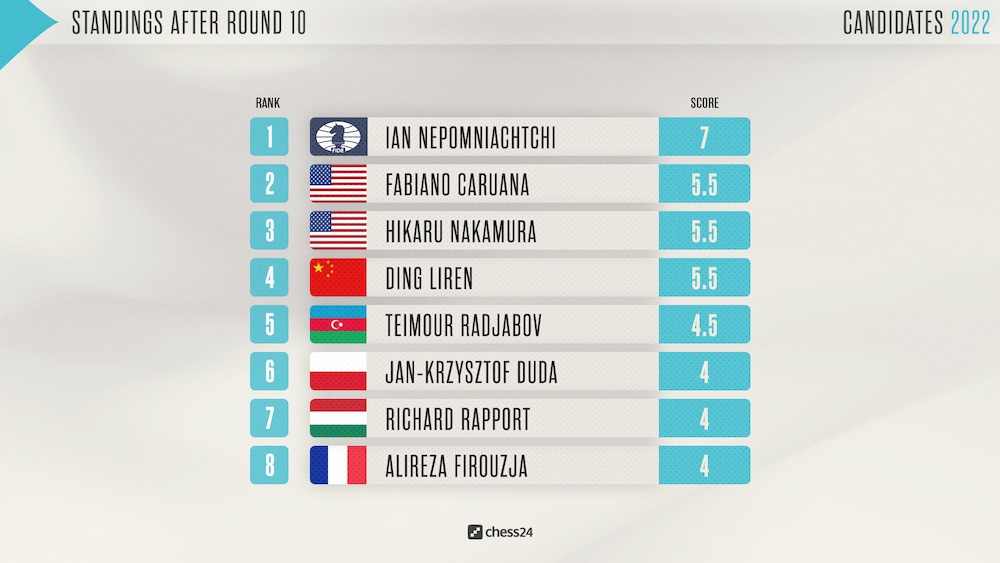 There are four rounds to go, but a lot could still happen. Alireza Firouzja plays Ian Nepomniachtchi in Round 11, and it’s unlikely Giri will want to stake his Twitter career on that clash ending in a draw!

But even if Nepo cruises to victory that might not be the end.

It's far from a certainty that Magnus, who just announced he's going to play the World Series of Poker in Las Vegas next week, would play another match against Ian Nepomniachtchi, in which case the 2nd place finisher would take on Nepo instead. That's a battle that's wide open.

In Round 11 the key clash for 2nd place is Caruana-Ding Liren, though Nakamura-Rapport is also huge. 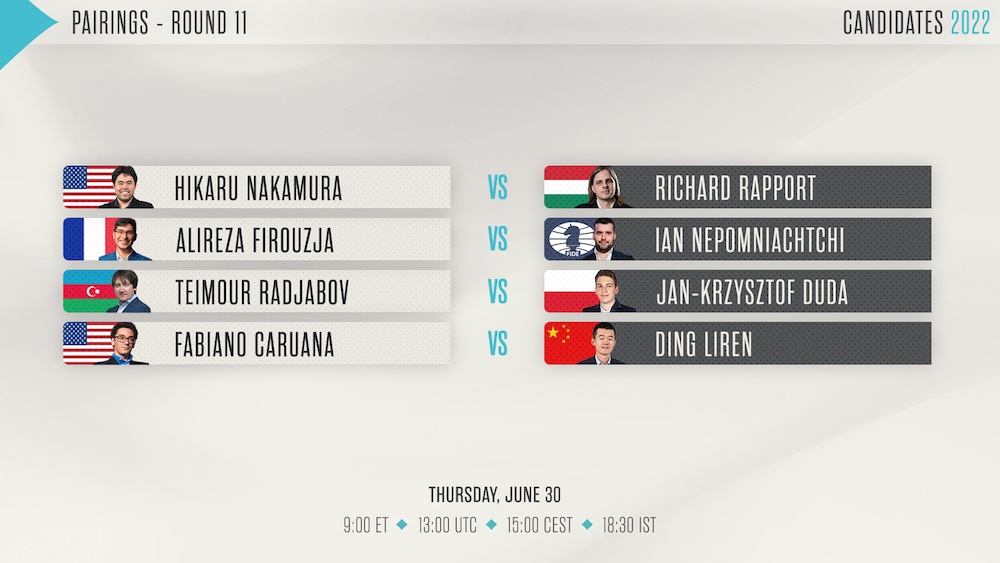 The FIDE Candidates Tournament, with Judit Polgar and Jan Gustafsson commentating, is live from 15:00 CEST.