For a moment Fabiano Caruana looked set to beat Hikaru Nakamura and end Magnus Carlsen’s 7-year reign as world no. 1, but accurate defence in the first game of the Grand Chess Tour semi-final meant that Fabi has now drawn 13 straight classical games in London. The other semi-final was also drawn, as Levon Aronian outplayed Maxime Vachier-Lagrave with Black but then let his French opponent off lightly. It was a similar story in the British Knockout Championship semi-finals, where despite McShane-Adams featuring multiple sacrifices both games also ended in draws. 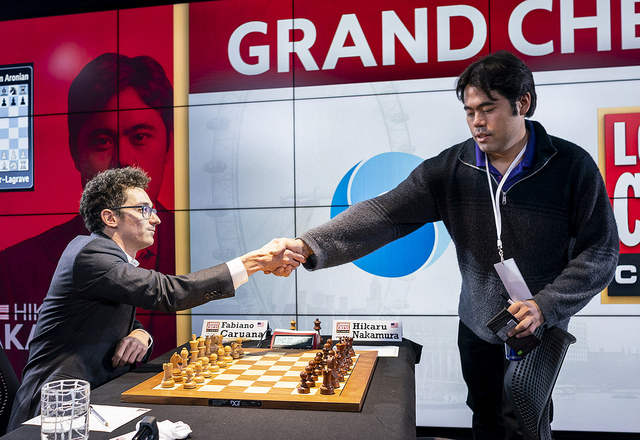 You can replay the Grand Chess Tour final games using the selector below:

And here’s the day’s live commentary from Yasser Seirawan, Jennifer Shahade, Cristian Chirila and Alejandro Ramirez, including interviews with all the players and a visiting Garry Kasparov:

There was also commentary in Russian from Peter Svidler and Evgeny Miroshnichenko and in German by our very own Jan Gustafsson. For Day 2 Jan is expecting to be joined by a special guest for some commentary in English! 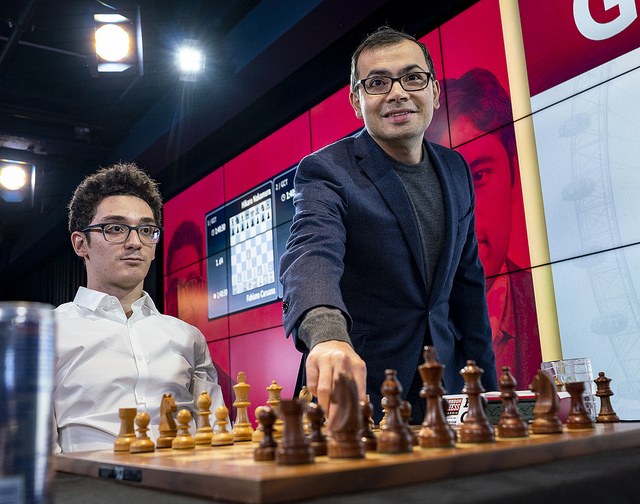 Fabiano Caruana opened 1.e4 in all 7 games he played with White in his World Championship match against Magnus Carlsen, but back in London on Tuesday he switched to 1.d4. That soon looked a good choice, as Hikaru went for the Queen’s Gambit Declined line he’d played recently in a painful Sinquefield Cup last-round loss to Magnus Carlsen and against Shakhriyar Mamedyarov in the Tata Steel India rapid event. Fabiano was ready to vary with 7.Qc2 (Magnus chose 7.Bd3 and Shak 7.Be2), and Hikaru admitted the setup he chose in response was “slightly dubious” and probably something he’d planned for a different line. Caruana was able to push e4 in the centre and by move 16 things were already critical:

Here Hikaru admitted afterwards that he thought he would be “very close to losing” after 16.Nh4 and 17.Nf5, which is a verdict computers don’t dispute, though Black can probably still defend with best play. Hikaru was therefore relieved to see 16.g4, when after 16…Rfe8 17.g5 Rad8 Fabiano said he “really wanted” to follow it up with another pawn push:

18.g6 was the option that Caruana spent 20 minutes calculating. At first he thought it was simply winning, but after spotting the defence 18…hxg6 19.Qb3 exd4! he eventually decided against it. It was a decision-making process most chess players are familiar with:

So I played a move that I didn’t really calculate, and I thought it was a semi-useful move. 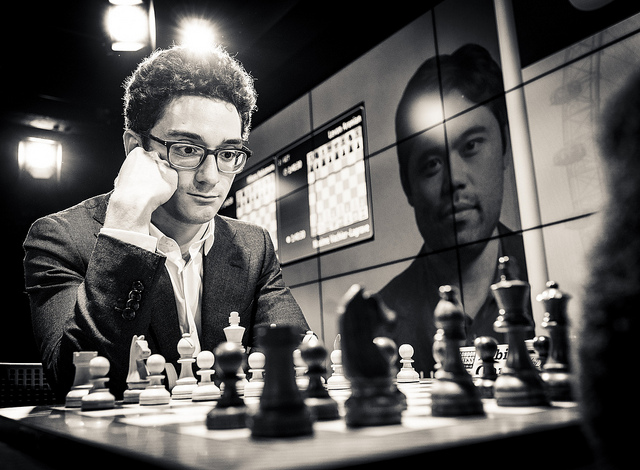 The point is that after 21…hxg6 White had 22.Ng5! and the clouds were gathering around Black’s king. At first computers were suggesting 22…c5 (“we’re not computers – it’s very hard to play a move like c5” - Nakamura) was close to an only move, but it turned out that 22…Nf8! also enabled Nakamura to walk a tightrope to safety. Caruana took his last long think of the game before move 23:

He did choose 23.Rd3, though in hindsight Garry Kasparov’s suggestion of 23.f4!? might have been worth a try. “It seemed like a ridiculous move” said Nakamura at first, though he later warmed to the idea of moving the king and transferring the d1-rook to the h-file along the back rank. 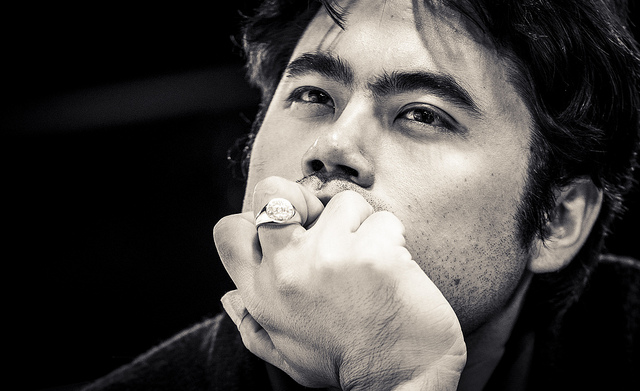 Black had weathered the storm, and now with 30…e4! it was Hikaru who could start to dream of seizing the initiative. Caruana admitted he might have regretted not forcing a draw earlier: “Of course when I have 2 minutes and he has 30, there is inherent risk”. One false step (e.g. 33.Rb4?? Rd2!) and it might have been game over, but Fabiano remained solid and the game soon fizzled out into a draw that left both players relatively satisfied. Caruana:

I had a feeling after the game that I was winning at some point, but so far nobody’s told me what the win is.

A draw is good, and also the game was interesting - a good way to start after a long break.

The draw cost Fabiano 1.2 rating points, making the gap between himself and Magnus 4.2 points. The World Champion can rest easy for another couple of days, since even if Caruana now beats Nakamura in the second classical game of their match it won’t be enough to snatch the no. 1 spot. Hikaru will no doubt be happy if that game ends in a draw and the match goes to rapid and blitz chess – a familiar approach to attempting to beat Fabiano in London! 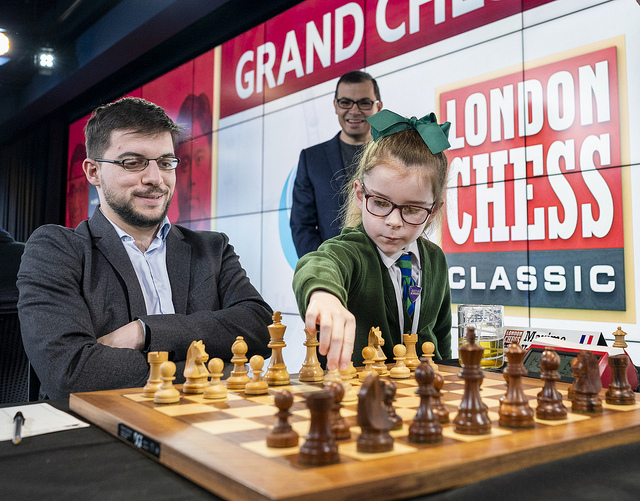 There were no surprises at the start of MVL-Aronian, as Maxime played his trusty 1.e4, Levon replied with his equally trust 1…e5 and we got an Anti-Marshall in which the first new move was 12…Qb8 – curiously afterwards Levon claimed not to have realised it was a novelty:

Maxime was unhappy with how he responded:

I tried to keep the life in the position with 14.d4, but in hindsight it was not my best decision. 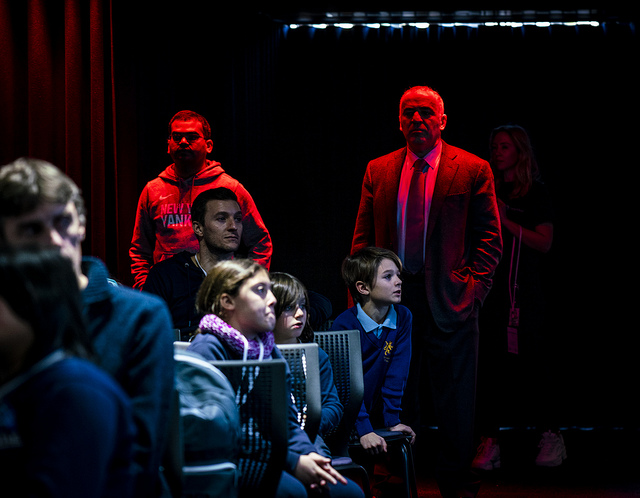 Garry Kasparov would later comment, “I look at this rook on a2 and I want to cry”, after the French no. 1 had played 18.Ra2:

Maxime didn’t disagree, and later said that after 18…Re8, he “was already looking for a bailout and not finding it”. Soon Black had a big edge, but Levon didn’t make the most of it. 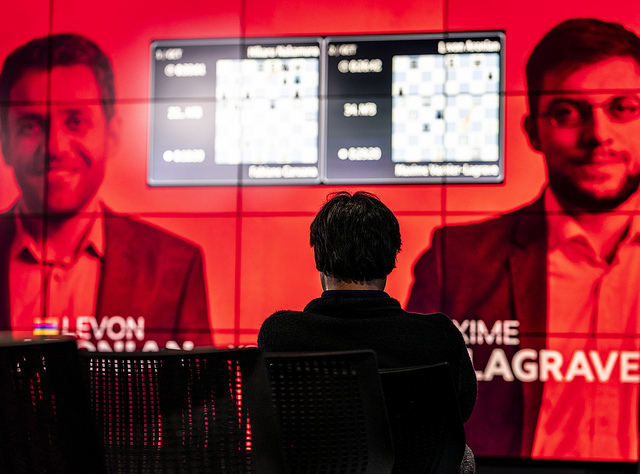 Maxime’s suggested improvement for his opponent with 24…Ng4! looks good, while he felt his troubles were over when he managed to give up an exchange:

35…d3! is winning there, since after 36.Nxe1 d2! the pawn queens. It’s very unlikely the Frenchman would have fallen for that in the game itself, though, and the drawing chances would still be high after 35.Kf1. In the game it was even soon Maxime who had any winning chances, but they were only nominal and no-one was surprised when the game ended in a draw (after 74 moves!). 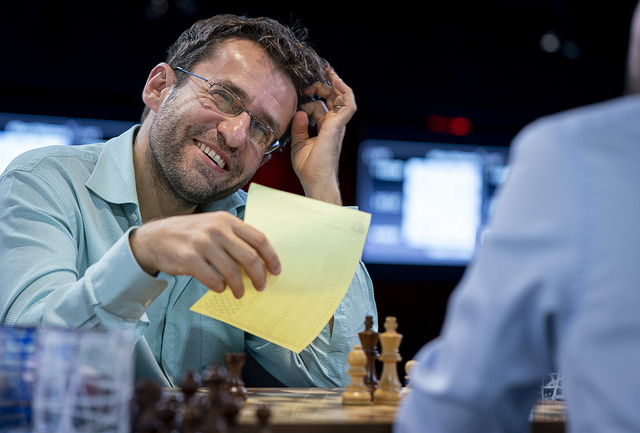 Nakamura and Aronian now have the advantage of White in the second classical game, though remember that whatever happens on Wednesday we’ll get to see all the rapid and blitz games played on Thursday.

It’s a similar story in the British Knockout Championship, where Howell-Jones and McShane-Adams both ended in draws. That second game featured sacrifices by both players and is well-worth a look. 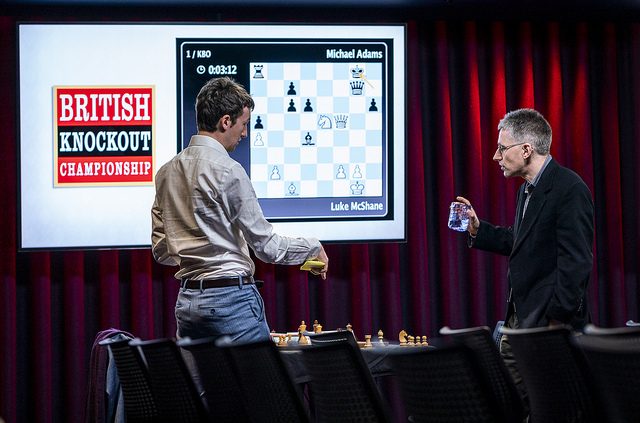 Luke McShane and Mickey Adams after a game in which Black might also have considered playing on instead of repeating moves | photo: Lennart Ootes, London Chess Classic

Follow live commentary in three languages on the 2nd classical games from 2pm London time (3pm CET) on Wednesday. As mentioned, we’re hoping to have a special guest speaking English on our German livestream for part of the day – you may want to follow our Twitter account to get notice of that as soon as it happens!