London Classic 4: Nakamura back in the hunt 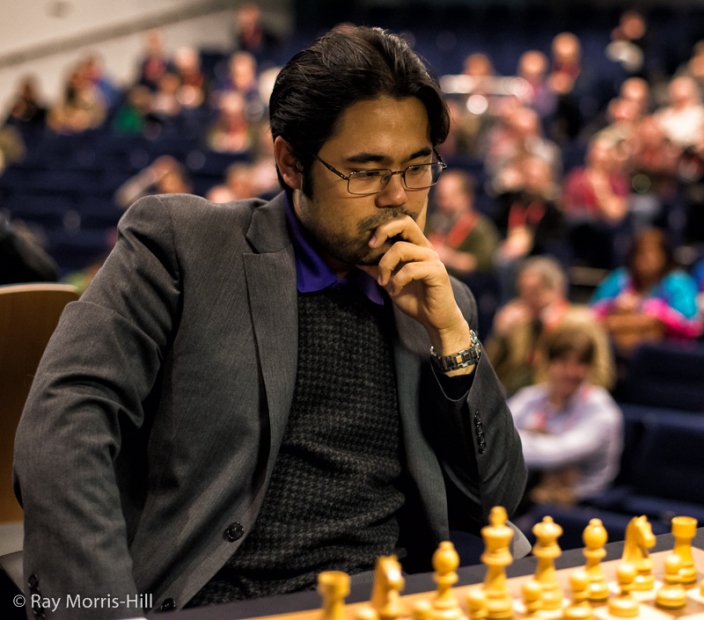 Hikaru Nakamura can now leapfrog Kramnik and Giri into first if they draw their final game... and he beats Caruana with the black pieces | photo: Ray Morris-Hill

Hikaru Nakamura can still win the 2014 London Chess Classic after beating Mickey Adams in Round 4. All three games played before a packed Saturday crowd featured the Berlin antidote 1.d4 and exciting chess, but young guns Fabiano Caruana and Anish Giri managed to thwart the plans of veterans Vladimir Kramnik and Vishy Anand. Jan Gustafsson provides video analysis of the game of the day, while we also have all the post-game press conferences with the players.

When Hikaru Nakamura was asked after his game if the Berlin Defence had killed off the move 1.e4 he replied:

Or perhaps you think both 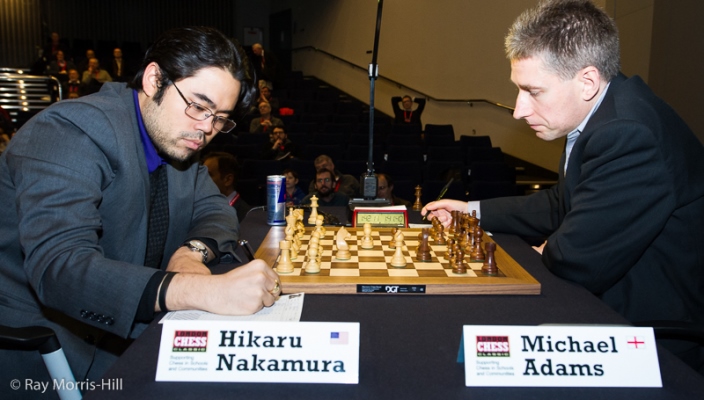 In any case, Nakamura opened 1.d4 and soon managed to gain an advantage which kept the pressure on Adams for the whole game. Jan Gustafsson looks at how events unfolded:

Mickey Adams has gone into something a tailspin after a first round win over Caruana that Peter Svidler labelled “epic”, and was suffering from a cold that only compounded his purely chess problems. The one relief was that he didn’t have to attend the post-game press interview:

You may have noticed that when Hikaru was asked if he’d prepared the line in the game in advance he downplayed his work with: “I was just clicking with the spacebar”. He was referring to a ubiquitous practice in modern chess – exploring moves with a computer chess engine and occasionally pushing the spacebar so the computer makes its top move on the board. 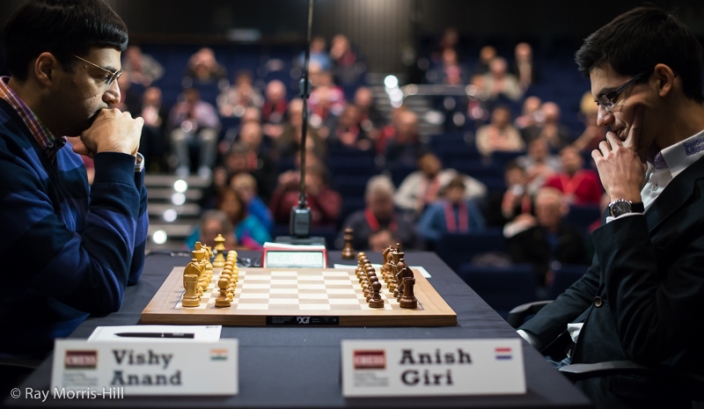 Hikaru probably didn't know it, but he was echoing the previous press conference, where Anish Giri told Viswanathan Anand he’d been trying to trap him in an opening variation:

I thought that, unlike Magnus, I can spacebar you in this, but apparently I can’t do it either… so what to do?

It was Anand who emerged with a very promising position after giving up a pawn on move 6. On move 14 he rejected an early chance to win the pawn back to instead play a novelty – the wonderfully quiet 14.h3!?

Up to a point Vishy’s position looked very good, but move 21 was the moment at which the computer and commentators felt things went wrong for White:

Anand played 21.Bc3 but soon ended up needing to play precisely to draw. He managed that without any great drama, but 21.c5!? might have been a better try. Vishy didn’t see any means to break through, though, commenting:

White’s position is lovely, but d4 is weak.

Giri, meanwhile, felt he’d need a lot of time to mount an assault on d4.

You can watch the full post-game interview below:

The remaining game looked all set to be a classic Kramnik positional grind, until Fabiano Caruana found a petite combination that equalised on the spot! 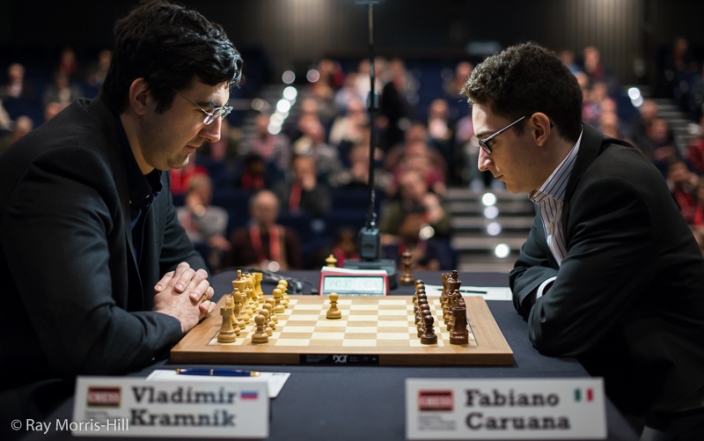 Afterwards Caruana found himself in the unusual position of being the only player who can’t tie for first place with a win in the final round.

He explained it simply:

If you lose in the first round it’s very tough to make it up in four rounds, especially with three blacks in only five games. Since then I’ve just played very dull games.

The final day pairings couldn’t be better, pitting the leaders against each other.

I guess my opponent will try to win and I’ll get some chances. He’ll be playing aggressively and I’m happy about that. At least I’m ready for a serious battle.

Don't miss the final round of the 2014 London Chess Classic, which starts at 14:00 London time (15:00 CET) on Sunday. Once against you can watch all the moves live with top commentators on the official broadcast here at chess24.