Vladimir Kramnik is often credited with stopping Garry Kasparov playing the King’s Indian Defence, and he was in ruthless KID-slaying mood in Round 2 of the 2014 London Chess Classic. A rare and dangerous idea had Hikaru Nakamura on the back foot before two consecutive mistakes sealed his fate. Elsewhere birthday boy Vishy Anand drew with Fabiano Caruana in 17 moves, while Anish Giri eked out a technical win against Michael Adams to join Kramnik in the lead. 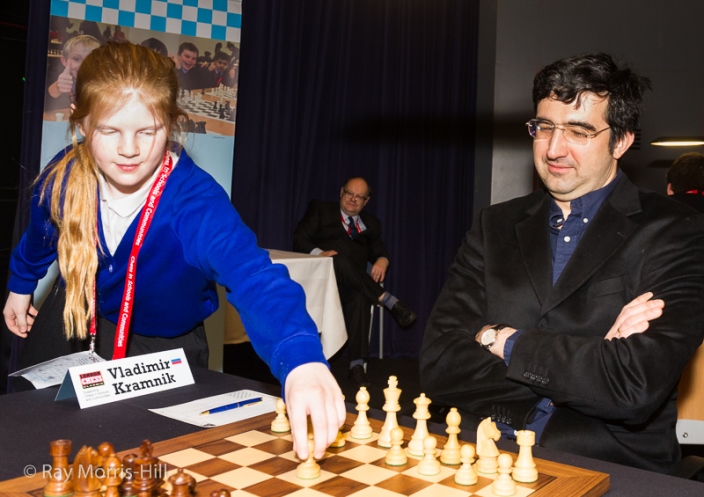 The King's Indian Defence wasn't the only kid Kramnik had to deal with - he called the move 1.e4, "too committal"! | photo: Ray Morris-Hill

There’s only one place we can start this report. Hikaru Nakamura has an excellent record against Vladimir Kramnik (five classical wins to three before today) and the pair have provided countless double-edged battles for us to enjoy, but this wasn’t one of them. Nakamura stumbled into some home preparation that Kramnik later said he’d had “in his pocket” for over a year:

9.Be3 is a very rare idea but in fact very dangerous, especially for one game over the board… I thought if I get it I have good chances of winning a game against any player.

It was soon one of those situations where even Red Bull wasn't enough: 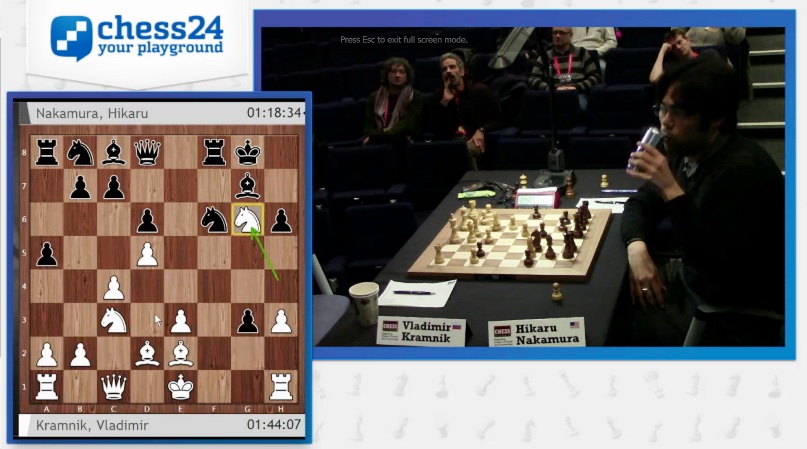 Grandmaster Jan Gustafsson takes us through the massacre that followed:

Afterwards Kramnik was in fine form talking both about the game and the King’s Indian Defence in general:

I won a lot of games in the King’s Indian, I have to say, without false modesty (smiles)… I think objectively it’s unsound, but there are a lot of tricks… I have to admit that I’m always happy to see the King’s Indian. You have pawns on c4, d4, e4. I don’t know any other opening where you get the centre without a fight… Strategically White is always better, and when I have a strategic advantage I’m happy.

Hikaru Nakamura, meanwhile, was trying to look on the bright side

The rest of the day’s action struggled to live up to that game.

Unfortunately Jan didn't make us a video of this game. We say unfortunately, since he knows stuff...

...and must surely have been right about the following:

The rest of us, meanwhile, were probably following the game more on the level of GM Danny King, who pointed out Vishy's position two moves later seemed to be celebrating the wrong day:

In the end Anand maintained his record of never losing on his birthday, but although the game ended on only move 17 it wasn't so short in terms of time, since the players agonised over their final few moves for over an hour. In the post-game interview they explained their choice - and gave us a glimpse of the exciting lines we never got to see at the board: 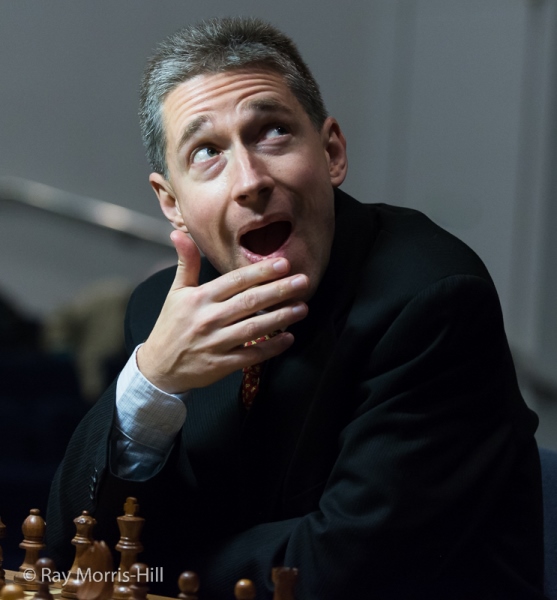 From hero to zero in a day | photo: Ray Morris-Hill

Chess is a fickle mistress. One day Michael Adams is leading the tournament and being lauded for a hard-fought win over world no. 2 Fabiano Caruana. A day later and he’s had to suffer over four hours in a miserable position, gone on to lose and seen his opponent and another of his rivals snatch the lead in the tournament.

This was also about Anish, though. His opening preparation may not have been as flashy as Kramnik’s, but it was just as effective. As he explained afterwards, knowing a tricky sideline a little better than his opponent was all it took. From some point onwards it became a question of the circumstances in which Adams would have to give up a pawn, and whether he could hold the ensuing position. Afterwards Giri identified Adams’ time trouble move 38…Ra1? as the losing error:

That allowed the surprisingly powerful 39.Ne8+!, when there’s no way to defend the g7-pawn and the ending just can’t be held. Adams resigned on move 47.

So after two rounds Anish Giri and Vladimir Kramnik are in the lead: 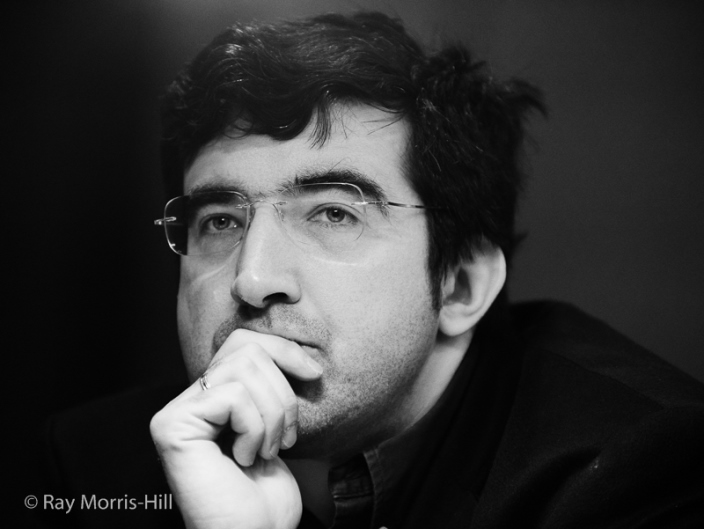 Round 3 see Caruana play his first game with the white pieces while Kramnik faces his first with Black. Nakamura is up against his second ex-World Champion in a row.

The action again starts at 16:00 London time (17:00 CET), and you’ll find all the moves and the official broadcast live here at chess24.