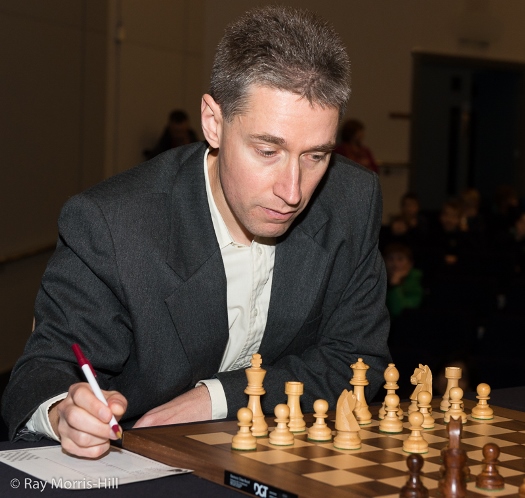 Adams took his blitz form into the first game of the classical event | photo: Ray Morris-Hill

“Pretty effortless,” Michael Adams joked immediately after his six-hour, 73-move victory over Fabiano Caruana in the first round of the 2014 London Chess Classic. That game of time trouble, huge swings in evaluation and missed wins salvaged what might otherwise have been a quiet day, since Hikaru Nakamura and Anish Giri took an early draw by repetition while Vladimir Kramnik and Viswanathan Anand’s outwardly thrilling encounter never quite left the realm of known theory. GM Jan Gustafsson recaps the day’s best games with video analysis.

The main event of the 2014 London Chess Classic was opened by the larger-than-life figure of Boris Johnson, whose term as mayor coincides with the six years of the chess tournament’s existence.

The event also took place with a certain Garry Kasparov signing books in the building, so the players had a lot to compete with. 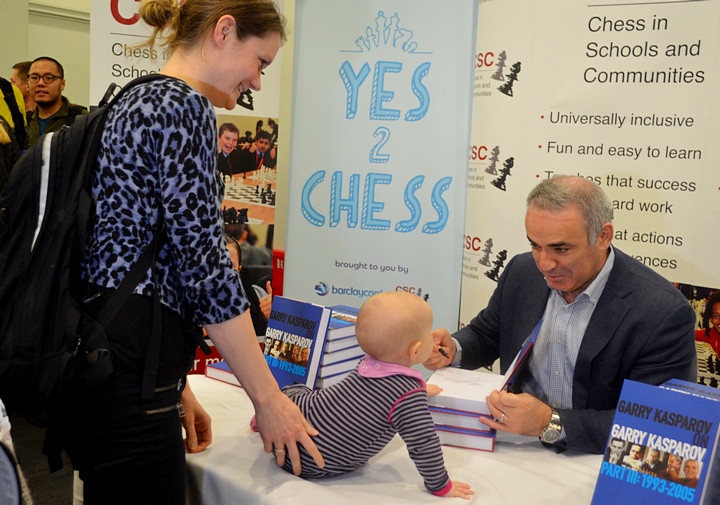 Initially it was a slow start. The first game to finish was Hikaru Nakamura – Anish Giri, which featured the weird-looking novelty 11.Re2 that Maxime Vachier-Lagrave had used to beat Giri in this year’s Biel tournament. 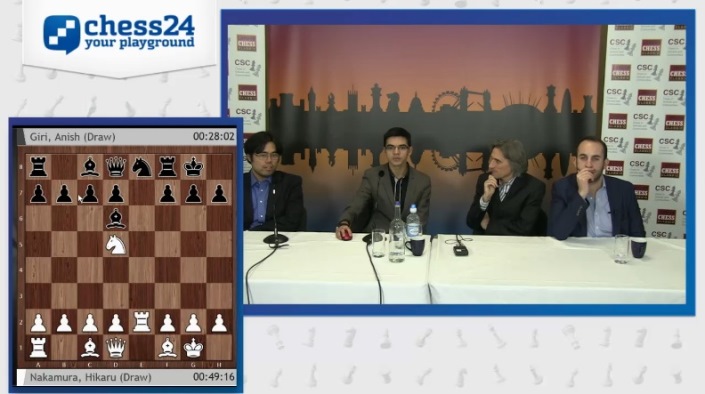 When Giri was asked to explain the point of the move afterwards he commented, “I learned it the hard way!” This time round he was prepared and surprised Nakamura with the move 14…Re6. A few moves later he decided to liquidate with 18…Nxe3:

Nakamura, to the bemusement of Giri and the commentators, played 19.fxe3, giving himself one pawn island more than seemed strictly necessary. If the aim was to get attacking chances with queens on the board it didn’t pay off, and a draw was soon agreed.

At this stage of the proceedings the game to watch seemed to be Kramnik – Anand: 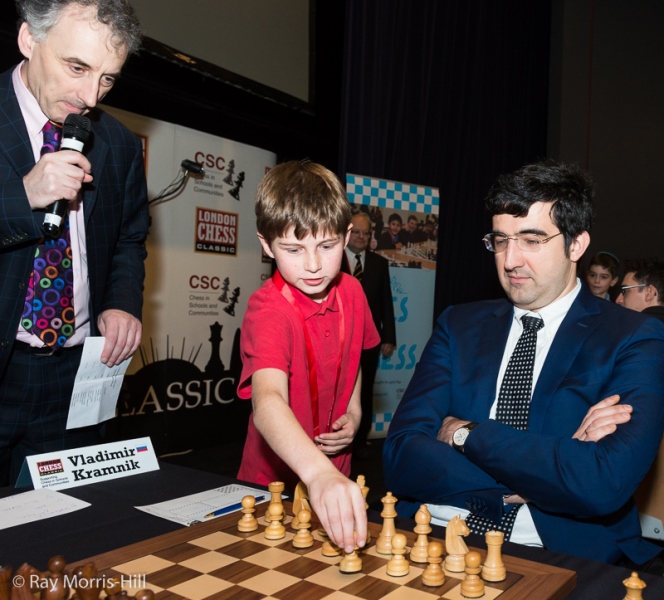 After the kid played 1.d4 Malcolm Pein asked Kramnik: "Is that move good for you?" Kramnik: "It's a good move, but I'll make a different one!" He chose 1.c4 | photo: Ray Morris-Hill

You can’t deny it provoked passionate responses, but not necessarily for the reason you might expect. Anish Giri was in the camp of the sceptics:

I wish Kramnik had played something harmless like this against me in Qatar… It looks exciting, but this particular game probably happened in fifty computer games.

He wasn’t far off the mark, and Nigel Short was busy thinking up cruel and unusual punishments for correspondence chess players, who it seems won’t be making his Christmas card list this year.

chess24’s Jan Gustafsson was frequently mentioned by the commentators Nigel Short, Danny King and Lawrence Trent as a man who'd know, so who better to answer one of the day’s burning questions… bore draw or thrilling battle?

Afterwards Vishy let slip that he’d looked at this line back in 2008, when his seconds suggested it during preparation for a match against a certain Kramnik.

I remember the first time I saw this position I just wanted to take back and try something else, but there was quite some correspondence and computer activity here and the statistics were quite good for Black.

When Kramnik was told the final position had been seen before he joked, “If these games were played by computers then we played a good game!” 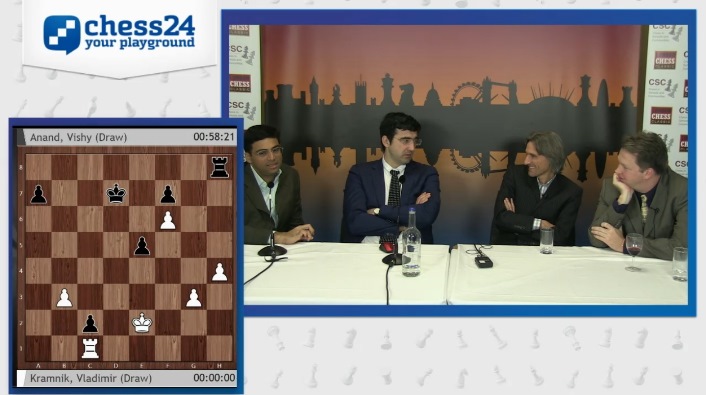 Then he waxed philosophical:

Of course I’ve got a computer chess database, some 10 million games, but I just threw it away, because you waste all your time checking these games… I’m not trying to be ultra-conservative but I’d definitely prefer not to have all these games. That’s why nowadays people are trying to play any accidental line to try and get out of this. I wouldn’t say computers are killing chess but they’re making our life more difficult. Computers are why people play moves like 1.b3

I’d strongly recommend someone puts the computer to work on 1.b3!

Luckily, though, we were spared any need to reflect on the old subject of the draw death of chess, since a slow Ruy Lopez had morphed into madness in Adams-Caruana. 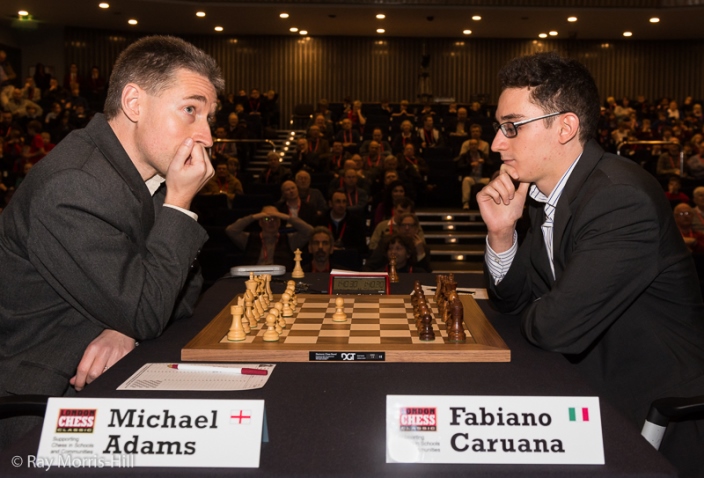 Mickey Adams’ 21.c4!? had set the cat among the pigeons, and when Caruana responded in kind with 27…c4?!, when he had 4 minutes remaining for 13 moves, all bets were off. Jan Gustafsson didn't let the late hour stand in the way of taking us through the engrossing battle that ensued:

So it was a long and twisting road, but in the end the blitz balance of power held sway. Adams, who finished first in that event, defeated Caruana, who finished last, so that the table after one round of the 2014 London Chess Classic was similar:

You can replay all the action from Day 1 on our Livestream channel, with the last five hours of the show, including all the player interviews, given below:

It doesn’t get any easier for Caruana in Round 2, since he has Black for the second day in a row, and this time against ex-World Champion Viswanathan Anand. Kramnik-Nakamura is also one of the pairings that has historically seen the most blood spilled in top level chess:

The action again starts at 16:00 London time (17:00 CET), and you’ll find all the moves and the official broadcast live here at chess24.