Many had written Daniil Dubov off after he lost Day 1 of the final against Hikaru Nakamura, but he proved the doubters wrong by storming back to level the tie on Day 2. Once again the first game of the day was vital, with Daniil outpreparing Hikaru with the black pieces and going on to grind out a win from a slightly better endgame. He described his strategy to match Hikaru as, “I will play random normal moves quickly,” and it seemed to work! Dubov drew the next three games to set up a $45,000 decider on Wednesday. 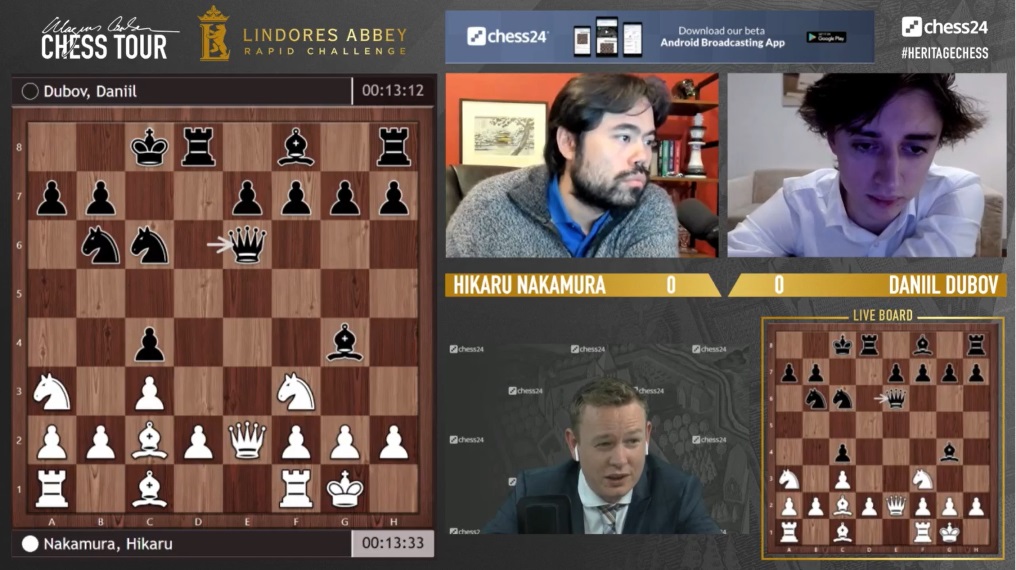 After a tough first day, Daniil Dubov came back to do what Nakamura had done to Carlsen on Day 2 of the semi-final – win the first game and then draw the rest to win the set: 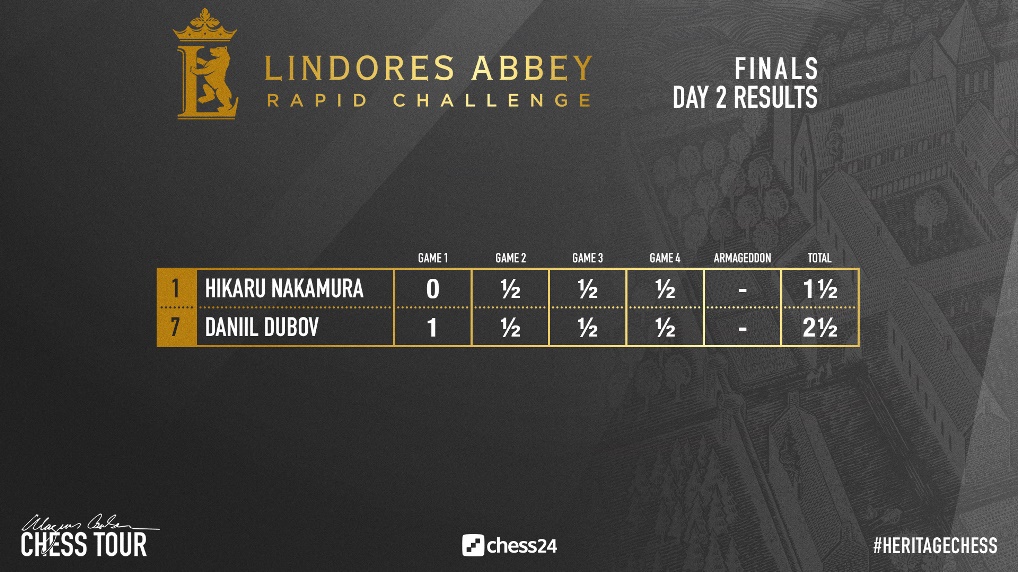 That makes it 1:1 going into Wednesday’s third and final 4-game mini-match: 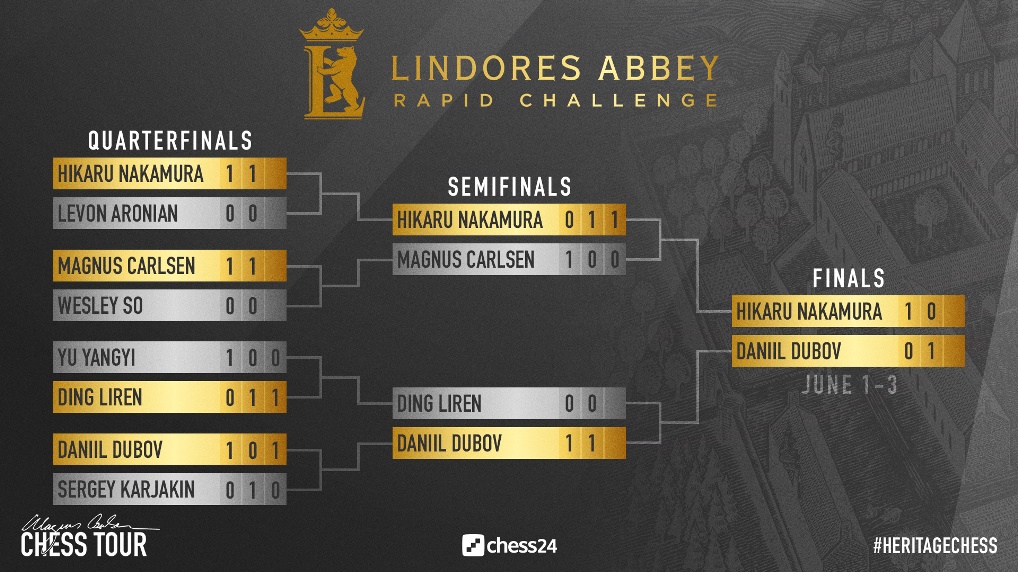 You can replay the day’s commentary from Peter Svidler, Jan Gustafsson and Lawrence Trent below:

“At least it was better than yesterday!” was Daniil Dubov’s understated assessment of Day 2 of the final. Almost everything that could go wrong the day before had gone wrong at the start for Daniil, who was staring at a 0:2 deficit before he was recognisably himself again. This time, however, there was to be no repeat. Instead Hikaru Nakamura’s opening surprise in Game 1, playing the Alapin Sicilian with 3.c3, backfired:

First of all it kind of makes sense to play the Alapin against me, because I’ve lost a very big number of games there, so I sort of knew it can happen.

Instead Hikaru went for 13.b3 but after 13…Bd5 Black was already for choice. A critical moment arose after 20…Rxf8:

Dubov said his opponent should have been able to draw here after 21.Nxe5, but it would be up to White to prove it. He felt it was reasonable for Hikaru not to go for that since there was no obvious forced draw, but he also had another explanation:

I think in general he was sort of inspired by the way I played yesterday. He basically thought I will be down to seconds and then I’ll blunder something, and that’s his general strategy. He basically plays fast and he never blunders and then he just waits and he knows that normally one time in a match of four games his opponent will probably blunder and then it’s enough, pretty much. It actually makes a lot of sense - it’s his great skill to play fast and avoid blunders - so it’s sort of reasonable that he tries to do it, but in this game it was quite difficult to blunder from some point. With the knight on c4 it looks reasonably solid.

After 21.h4 f6 it took another 8 moves for that knight to get to c4, but as you can see, by that point Daniil had seized total control of the situation:

He didn’t put a foot wrong for the rest of the game, while Hikaru, in a position that was already lost, managed to make a mouse-slip that reduced his chances of escape still further: 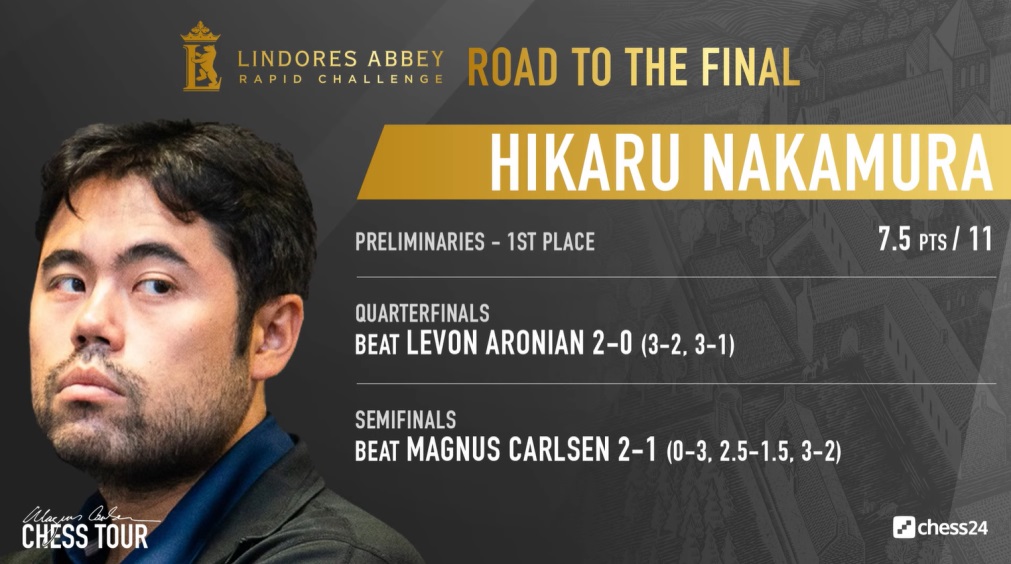 That left Daniil needing only draws in the remaining games and, perhaps against the odds, he made them. His strategy was “mirroring” his opponent the day before:

He played really fast, and for today I just decided I will do pretty much the same thing. I will play random normal moves quickly. It kind of worked out.

Game 2 saw Daniil repeat the opening that brought him victory in Game 3 the day before. Hikaru had done some work himself and came prepared with an improvement on move 13, but it was only good enough for a draw when Daniil decided not to show all of his tricks:

Today he was obviously prepared and what he did was more reasonable. I know how to get a game here with White, but I just thought I don’t need it, honestly.

Curiously, and perhaps more for psychological than chess reasons, Daniil did reject a repetition of moves, but then the position was played out to a draw shortly afterwards.

Game 3 was similar, with Daniil describing it as “short but funny”. It became a Dragon Sicilian, or did it?

Daniil felt Hikaru played the opening sensibly, to a point:

I don’t think he actually realised what the idea of this 9.h3 is, in fact. I thought the whole concept with Nd5 is very comfortable for Black.

Daniil went for a sharp line, taking on c2 with his queen, having correctly calculated that it was fine for Black. A draw followed in 45 moves.

That meant Hikaru now faced a must-win game with the black pieces, for which he decided to play the Leningrad Dutch, a choice he’d also made when he won the 2019 US Chess Championship by beating Jeffery Xiong in the final round (he's still the champ after this year's event was postponed):

By the time 17.c5 appeared on the board Peter Svidler was already calling the match in Dubov’s favour:

The closed position seemed to be perfect for White in a game he only needed to draw, but soon the fortress was looking decidedly shaky. The critical moment appears to have been move 31, when Hikaru went for 31…Qa3 instead of 31…Qb6:

Here Daniil played 32.e3, hitting the b5-rook, which was a good move, but not as good as the perhaps more obvious 32.e4! He would later say:

I think I should have played e2-e4 many, many times, maybe starting from move 1, actually!

I kept calculating e4 every single move, and every single time it takes you like 40 seconds, and then you play Bd3 or Be2, and at some point I realised if I continue like that I’ll just lose on time. Or I’ll play e4 when I’ll be down to 20 seconds.

37.e4! effectively ended the match. Daniil felt his opponent should have played 37…fxe4 in any case (“if you lose, you lose”), though after 38.f5 exf5 39.Qg5+ White not only has a draw by perpetual check (“my intuition was screaming that I’ll have at least perpetual here”) but should be winning. Still, in the game after 37…d4 Daniil thought there was no longer any hope for Black. In fact later, for one move, there was a clear win for White: 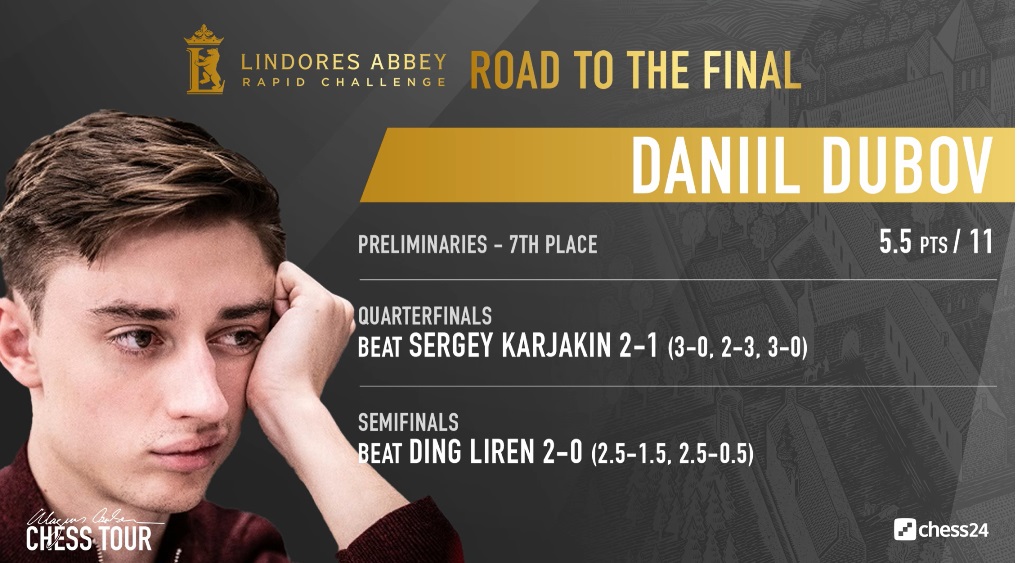 Dubov noted he didn't want to win for the sake of it against Nakamura, but he had wanted to beat Karjakin 3:0... twice!

They’ll now face off for one last time on Wednesday with the winner of the final 4-game match winning not just $45,000 but an automatic place in the $300,000 4-player Magnus Carlsen Chess Tour Grand Final. How seriously is Hikaru taking that?