Hikaru Nakamura has one foot in the Grand Final of the Magnus Carlsen Chess Tour after beating Daniil Dubov 2.5:1.5 on Day 1 of the Lindores Abbey Rapid Challenge final. Hikaru commented, “I did what Daniil does against everybody, I played the man more than I played the position” about his decision to “make the game as flat as possible”. Starved of the exciting positions he enjoys, Daniil was ground down 2:0 in endings before mounting a comeback in Game 3. Game 4 looked promising, but Hikaru held on to take the lead in the best-of-3 match. 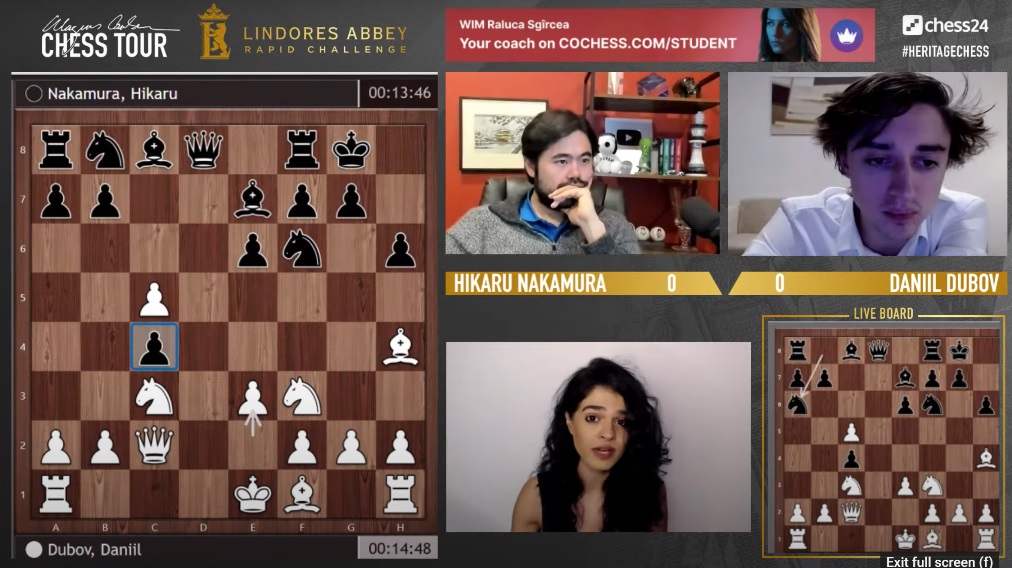 Hikaru Nakamura raced to an almost insurmountable 2:0 lead, and although Daniil did win the 3rd game to keep the mini-match alive he was unable to force Armageddon: 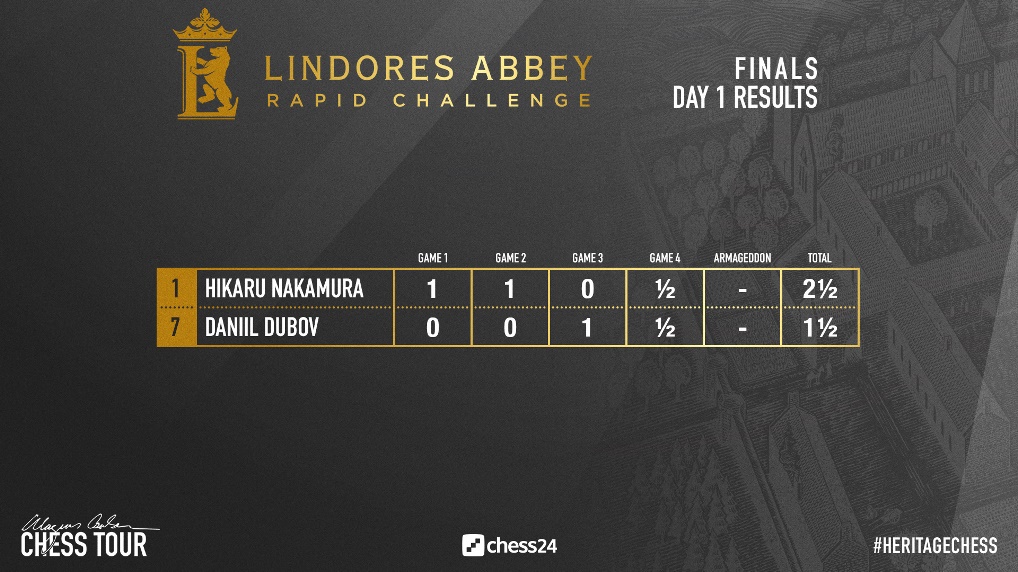 That’s still just the first of three potential mini-matches, however, so that if Daniil won on both Tuesday and Wednesday he could still win the $45,000 top prize: 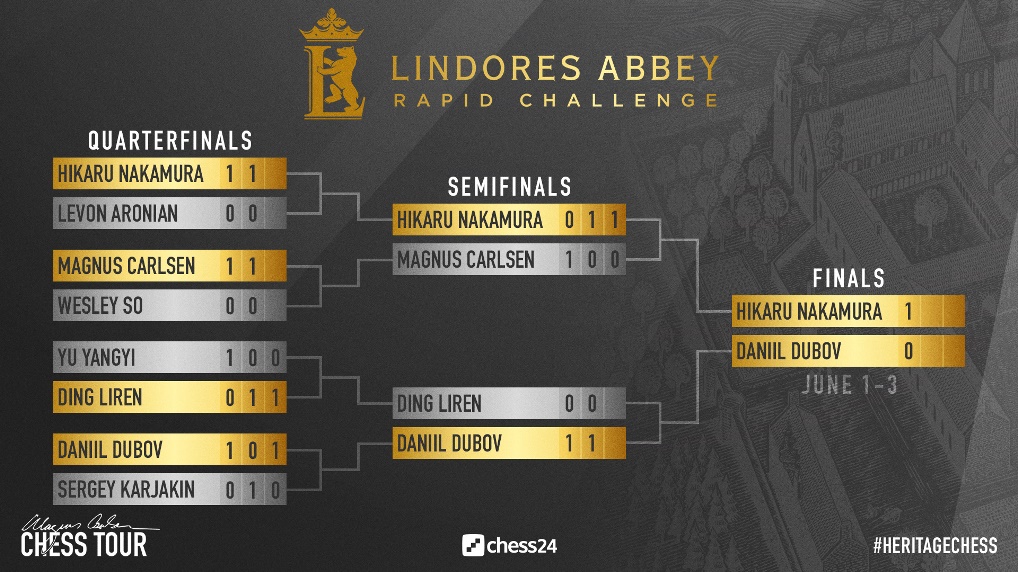 And here’s the Aftershow with Pascal Charbonneau (at 22:00 CEST):

Game 1: Dubov 0-1 Nakamura – Playing the man more than the position

“I think the match, like most of the other matches, hinged on the first game,” said Hikaru Nakamura, and the start he got off to seemed ominous for Daniil Dubov. Before going into the details, however, let’s take a look at what Hikaru later had to say about his overall strategy. Tania Sachdev asked him how Daniil differed from Hikaru’s earlier knockout opponents, Levon Aronian and Magnus Carlsen:

I think Daniil’s much different than Magnus or Levon, in that he is one of these guys who tends to play the person more than the board. So for example, he played against Sergey [Karjakin] and Ding Liren, who are both very solid players, and of course they’re very strong, but they tend to be very set in the way that they play, they don’t really like getting out of their comfort zone where they’re not in preparation in the opening phase of the game, and I think that’s why it wasn’t even close when he played both of them. He got them out of their comfort zone. They really didn’t like what was happening, they weren’t able to find the best moves – and couple that with great play as well that makes for a very difficult match.

Hikaru, on the other hand, said that he relished the challenge:

I think against Daniil I actually like it, because I like being out of my comfort zone. I feel in general if both players are out of their comfort zone just playing chess, that’s actually I think when chess is the most fun as opposed to stuff that’s pure preparation. From that standpoint I really like playing Daniil as opposed to Magnus or Levon, where it’s a completely different sort of style match-up.

You can watch the whole post-game interview below:

So we could expect exciting chess? Well, not exactly. Daniil did get an edge with the white pieces against Hikaru’s inevitable Queen’s Gambit Declined, but then didn’t seem to find the best follow-up to his “very committal” 17.b5. Hikaru responded 17…a5:

Hikaru’s explanation of why he didn’t really consider that move is the flip-side of the “out of their comfort zone” excitement we could expect – he had a firm strategy to deal with Daniil’s ambitious play:

I did what Daniil does against everybody, I played the man more than I played the position. I felt that Daniil really wanted to press hard in the white games, he likes to be very creative, play things that are not standard, so for that reason I figured try to make the game as flat as possible, which also fits in with the match strategy, just try to be very flat and that’s why I didn’t really consider it.

Hikaru was expecting 29.Qd4!, while 29.Rd1 is also solid, but after the move in the game Hikaru got to play 29…d4! and just how bad things were for White was evident after 30.exd4 Qxd4 31.Rc6 Qe4!, threatening checkmate, forced the white rook simply to go back with 32.Rc1. There were some slim hopes for White, but Daniil never looked like rescuing the situation and Hikaru had everything worked out.

The way that game ended suggested Daniil wasn’t in top form, and Hikaru felt it continued into Game 2:

I think Daniil wasn’t super-sharp in the first two games specifically. I felt that he was missing some tactics, and in the second game as well it was kind of the same thing. He just didn’t seem completely there, he wasn’t super-sharp.

If Daniil hadn’t quite woken up Hikaru certainly wasn’t planning on waking him, commenting that, “instead of playing something interesting I played something extremely boring again”. After the game was interrupted for a few minutes due to technical issues we once against got a technical endgame, and Daniil again went astray:

Hikaru pointed out that simply defending the e-pawn with 25…Nd7 should peter out into a draw, but Dubov went for 25…e4?, which just left him a pawn down after 26.Nc5! b5 27.Nxe4 Nxe4 28.Rxe4. One more mistake and Hikaru got to demonstrate some impressive technique to win the rook endgame.

It was looking bleak for Dubov, but this was more like it! He finally caught Hikaru in the opening, following an idea one of his coaches, Boris Gelfand, had used to beat Romain Edouard in the 2017 European Team Championship:

Those were subtleties, however, compared to move 29:

Daniil went on to win convincingly.

That still left Daniil Dubov with the extremely tough task of winning on demand with the black pieces, but the opening gave some hope. Black had potential and even a slight edge:

Hikaru later said he never felt in danger, however, and he managed to find an active way to defend – launching his knights Tal-style at Dubov’s king:

It was more of a distraction from Black’s strategic dominance on the queenside, but it worked, with Dubov having to make concessions until all the life was gradually drained out of the position and a 45-move draw meant Hikaru had won 2.5:1.5.

The good news for Dubov is that the players start again at 0:0 on Tuesday and if he can win that match he’ll set up a decider on Wednesday. Hikaru, meanwhile, can seal the deal with the $45,000 top prize and a place in the $300,000 Grand Final this August if he wins the second match as well.