World Chess Champion Magnus Carlsen described his play as “completely unacceptable” as he spoilt a good position and stumbled into a mating net against Yu Yangyi before getting comprehensively outplayed by Jan-Krzysztof Duda on Day 2 of the Lindores Abbey Rapid Challenge. In between he grabbed a win against Wei Yi and should be close to qualifying for the quarterfinals, but it’s Hikaru Nakamura and Sergey Karjakin who can truly rest easy after scoring a win and 3 draws each to maintain the lead on 5.5/8. 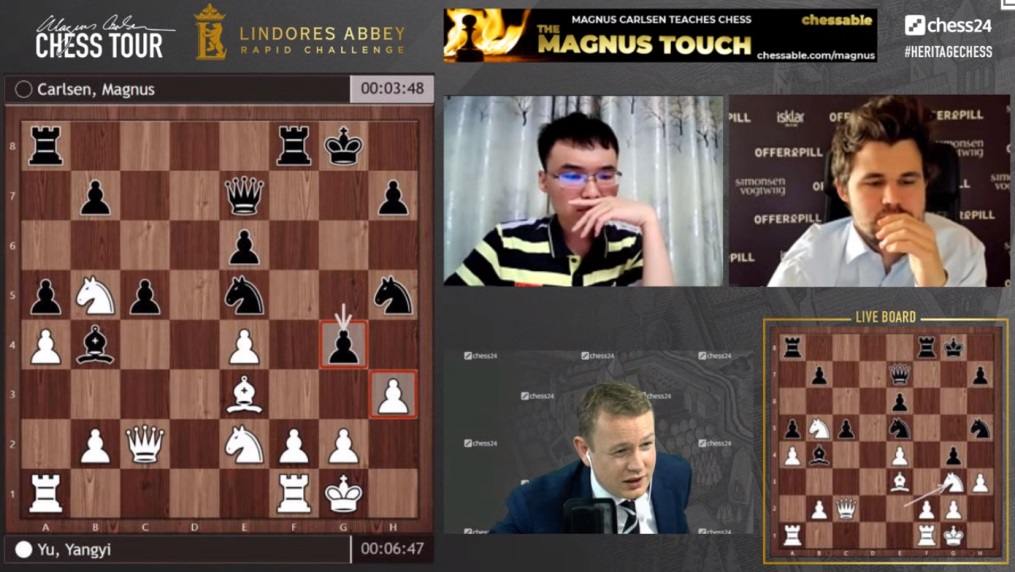 Jan was convinced Magnus is trying to look like a lion, and early on in Yu Yangyi-Carlsen the moves made the same impression

You can replay all the games from the Lindores Abbey Rapid Challenge using the selector below – click on a result to open the game with computer analysis:

Pascal Charbonneau was back with his Aftershow:

A tough day for the World Champion

Magnus Carlsen finished with 3/4 on Day 1 after playing the top 4 players not named Magnus in the event, and could have expected the final two days of the preliminary stage to be a chance to have some fun. For the first 18 moves against Yu Yangyi in Round 5 it seemed that might be the case:

Here the World Champion went for 18…g5! 19.Be3!? g4! and was all but winning, though Yu Yangyi kept on making good moves and managed to survive to an endgame where his two rooks were suddenly more than a match for a rook and two minor pieces. 40…a3? was the point of Carlsen’s previous play, but also the point of no return!

Anish Giri is always on hand to comfort his friends:

Magnus managed to bounce straight back after rejecting a repetition of moves against young Chinese star Wei Yi in a position where objectively the best move might have been to take the draw. There were differing explanations for the decision to play on!

Had order been restored to the universe? Not exactly, as up next was 22-year-old Polish Grandmaster Jan-Krzysztof Duda. Our profile of Duda published on the morning of the game had included a quote from Magnus about Jan-Krzysztof:

It’s always interesting to watch his games because he always goes for it, he never plays for a draw.

This game as well Duda was going for it, but then who wouldn’t after how well the opening went. It was perhaps less about the position than the situation on the clocks:

Here, after thinking for over 4 minutes, Magnus swapped off queens with 16…Qd5!? 17.Qxd5 cxd5 18.f3 Re8 and when Jan-Krzysztof now paused for almost four minutes it was due to an excess of mouth-watering options:

Peter Leko explained that 19.b5 just looks positionally winning, and you might play it instantly in blitz, but that Duda was delaying because you could also directly win a pawn with 19.Nb5 Re7 20.Bxf6, which is what the Pole eventually played. Peter felt Magnus might have welcomed that, as it gave him a chance to become more active with the later Ba6 - but on the other hand, a pawn is a pawn!

…but it always favoured Duda and incredibly, for a second time in three games, Magnus resigned while staring down the barrel of mate-in-2. You can see how much it meant for Duda to beat the World Champion for the first time!

His win was reported on Polish television and Duda was congratulated by the Polish President himself, who said he was even prouder given they share a surname!

That meant that Magnus, who went on to draw the final game of the day against Wesley So, was repeating the pattern of playing well with White but struggling with Black that we’d seen from him in the Steinitz Memorial and also at times in the Magnus Carlsen Invitational. He was understandably unhappy:

On the other hand, he’s not alone! The overall stats are now 21 wins for White and just 5 for Black. After beating Magnus, Yu Yangyi went on to lose to Levon Aronian with Black and exactly the same fate almost befell Duda. He somehow managed to wriggle out of a dead-lost position, however, with Leko commenting:

This is the young generation - they believe! I'm not a believer anymore…

Nakamura and Karjakin in cruise control

Magnus is still on +1 and a strong favourite to finish in the Top 8 and qualify for the quarterfinals, but only Hikaru Nakamura and Sergey Karjakin currently look sure to make it. They both began the day in the lead and went on to draw three games and win one. In Hikaru’s case that win was against Levon Aronian, with the US grandmaster later explaining that he was happy to be left with an isolated d-pawn, since he sensed that it would tempt Levon into overpressing. The critical mistake was 35…c5?

It looks like Black is winning the d4-pawn, but Hikaru had set this up with his previous move and now sprung the trap with 36.Qe4! There was nothing better for Levon than 36…cxd4 and after 37.Bxb5! Qd6 38.Qb7 the situation was reversed: Black was left with weak pawns that eventually cost him the game.

Wesley So also started the day as a co-leader and picked up three draws, though he ended only tied with Magnus after a blunder in Round 6, which brings us to:

Blunders of the day

Wesley’s blunder was to capture on c3 and allow Daniil Dubov to play 11.Rd8+!

Had he missed that the c6-knight is pinned? Perhaps, though Peter suggested that Wesley might have got too tricky, hoping that after 11…Ke7 12.Rxh8 Be5 he could capture the rook after e.g. 13.Bxe5 Nxe5, with Ng6 to follow. Instead 13.Bxc6! simply left White an exchange up and Dubov went on to get a vital win.

Other blunders were even harder to explain, such as when Alexander Grischuk attacked Ding Liren’s queen with 22…Nf6:

If karma exists it may have come back to bite Grischuk, since in the last round of the day he played the “sophisticated” 54.Rh6?? instead of simply taking Dubov's pawn on h7:

Some of those mistakes wreaked havoc with the tournament standings, which see 10 of the players either inside or within a point of the “relegation spots” – the final four places which mean the players leave the tournament on Thursday and don’t go forward to the quarterfinals: 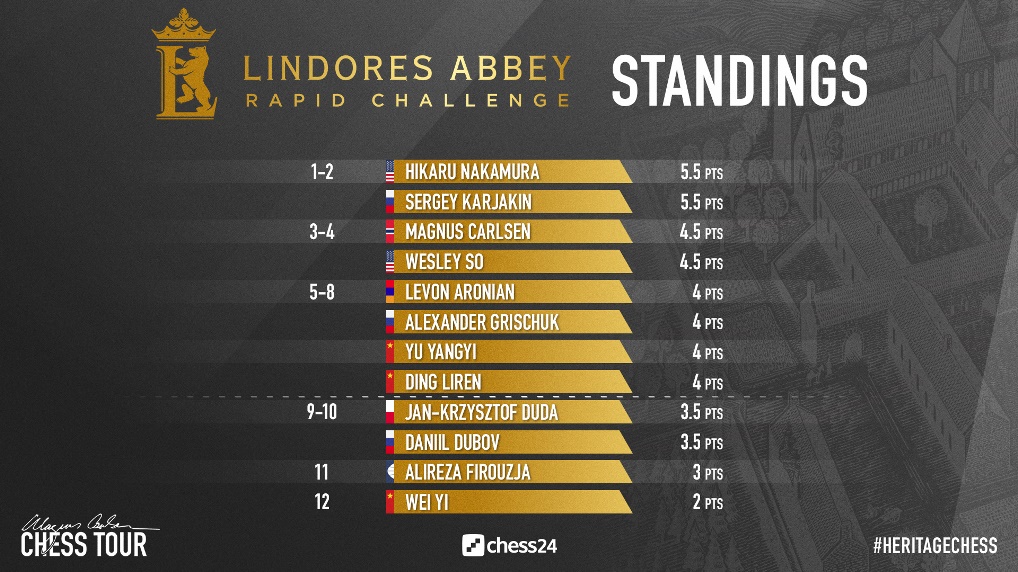 Only Wei Yi looks to have a real mountain to climb – he’s yet to win a game and starts Thursday against Nakamura – but all of the other players will feel they can finish in the Top 8 if they play well on the final day. One clash with the potential to be a thriller is Firouzja-Carlsen in Round 11 – chess fans will be hoping Alireza is no more than a point away from safety by that stage!

Don’t miss all the action with Peter Svidler and Lawrence Trent returning to join Jan Gustafsson for commentary here on chess24 at 15:30 CEST.