World Chess Champion Magnus Carlsen was paired against all four of his toughest rivals on Day 1 of the Lindores Abbey Rapid Challenge but almost took the sole lead with 3.5/4. That would have been some statement, but a missed win against Hikaru Nakamura meant that Hikaru, Wesley So and Sergey Karjakin all matched him in the lead on 3/4. Wei Yi blundered into mate-in-1, but at least he has company in last place on 1/4: Duda, Dubov and Firouzja are all also in danger of leaving the tournament on Thursday. 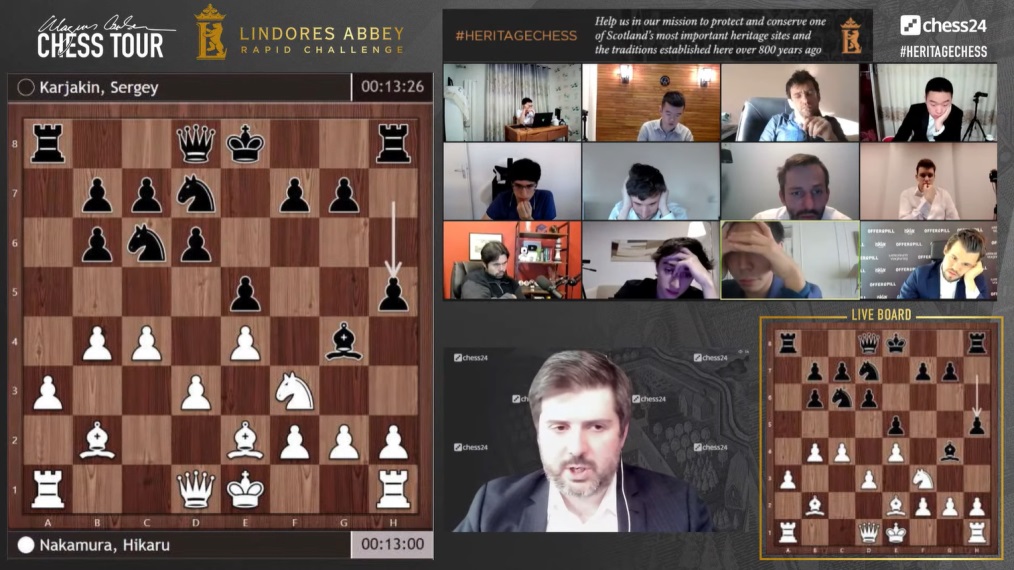 You can replay all the games from the Lindores Abbey Rapid Challenge using the selector below:

At the drawing of lots before the Lindores Abbey Rapid Challenge lightning struck twice. For the second time in a row in his Magnus Carlsen Chess Tour the World Champion was randomly allocated the no. 1 seeding number, and in this case it meant that on Day 1 (of 3) of the preliminary stage he’d play all four of the next highest rated players in the event. He was also picked to have White in three of the four games…

Magnus had been a little shaky in the Steinitz Memorial – despite winning it by a full two points – but not with the white pieces, and that same pattern repeated itself. He began by blowing away Alexander Grischuk after launching his h-pawn up the board in an Anti-Berlin with 4.d3.

In Round 2 he won even more convincingly against Levon Aronian, who thought distracting Carlsen’s bishop with 15…c4? would be enough to justify some gluttony:

Magnus had to dig deep to hold a draw with the black pieces against his most problematic opponent of late, Ding Liren, but then he had White against Hikaru Nakamura. Following on from the games we saw recently in the Magnus Carlsen Invitational – including in the final – it was a fantastic battle. Magnus called 15…Bb4 by Hikaru "careless" and later got to make attractive use of another lunge with his h-pawn:

46.Rb8! was winning, with the threat of infiltration by the queen making 46…Qd6 absolutely forced, while the ending after 47.Qxd6 Nxd6 48.e5! isn’t one you’d choose to defend against Magnus. Instead 46.Qd5?! Qxf3 47.Qe5+ saw the game end in perpetual check.

So it had been a very decent day at the office for the World Champion, who told Norwegian TV he was pleased with his result, even if he hadn’t quite crushed the souls of his rivals to the extent he might have liked.

Losing to Magnus isn’t the end of the world

On the subject of crushed souls, Carlsen’s opponents knew very well that for the first three days of the tournament the main goal is simply to finish in the Top 8 and qualify for the quarterfinals, so that one loss was far from the end of the world. Grischuk and Aronian both ended the day on a satisfactory 50%, even if Levon had been staring into the abyss for a moment against young Alireza Firouzja:

42…R5h4!! is the kind of resource you wouldn’t necessarily bet against Firouzja finding, even if our commentators did suggest you might get disqualified for computer cheating if you played it! The knight can’t move as 43…R4h2# would then be checkmate, while 43.gxh4 runs into 43…Qxh4+ and if 44.Qg3 then 44…Rf1+ picks up the queen. There was no shame at all in missing that, but Alireza did then go on to blunder his rook to a fork.

The blunders are there, waiting to be made

It was a tough day for Firouzja, who saved a lost position vs. Ding Liren and was also lost in 17 moves against Hikaru Nakamura:

That was far from the worst indignity anyone suffered, however. After 9 decisive games in 12 in the first two rounds there was a quieter Round 3, where Peter counted roughly 3 draws...

It could have been 4, or Wei Yi might perhaps have gone on to win, but instead he missed what looks like an inspired trap by Sergey Karjakin – 40…Kf5!

Seeing the h7-square left unguarded Wei Yi decided to go after the black h-pawn with 41.Rh7??, played after 16 seconds of thought… The problem? The black king had just taken away the last two squares from the white king, and it turned out 41…Ne1# was mate!

The only consolation was that Wei Yi is far from the first chess player to have missed mate-in-1:

Vidit is referring to his allowing mate-in-1 in a game where he still had over 20 minutes on his clock. Check out: 5 Incredible Missed Mates

Sergey took full advantage of that free point to join the leaders on 3/4 despite having started the day by getting outplayed by Nakamura. The way he exploited Duda’s decision to exchange queens (“It’s not immediately obvious you have to simplify into a piece down endgame” – Svidler) was simple but satisfying:

25.Rxc8! Rxc8 26.Nd6+ and although the young Pole fought on valiantly, the extra piece eventually told.

The other player to suffer most was Daniil Dubov, who lost tough games with Black to Chinese stars Ding Liren and Yu Yangyi to join Wei Yi, Duda and Firouzja in the bottom 4. Unless they can climb out of those spots by Thursday they’ll leave the tournament after just 3 days:

There are still 7 rounds to play (4 on Wednesday and 3 on Thursday), however, so absolutely nothing is yet set in stone, and there’s also good reason to aim to finish as high as possible – the seedings for the quarterfinals will see no. 1 play no. 8, no. 2 play no. 7 and so on.

Tune into all the action tomorrow from 16:00 CEST, when Jan Gustafsson will this time be joined by Peter Leko and Tania Sachdev. Catch the preshow here on chess24 at 15:30 CEST, before the games begin at 16:00 CEST.