Wesley So demolished Hikaru Nakamura in the first round of the day as he cruised to victory in the rapid section of the Your Next Move Grand Chess Tour in Leuven. His 14/18 was an exact repeat of his score a year ago, but this time there’s no Magnus to overtake him. Nakamura claimed (for which Fabiano Caruana criticised him) “several of us… are much better blitz players than Wesley”, and good days for the likes of MVL and Alexander Grischuk set up the blitz showdown nicely. Only Anish Giri and Vishy Anand would need a miracle to challenge. 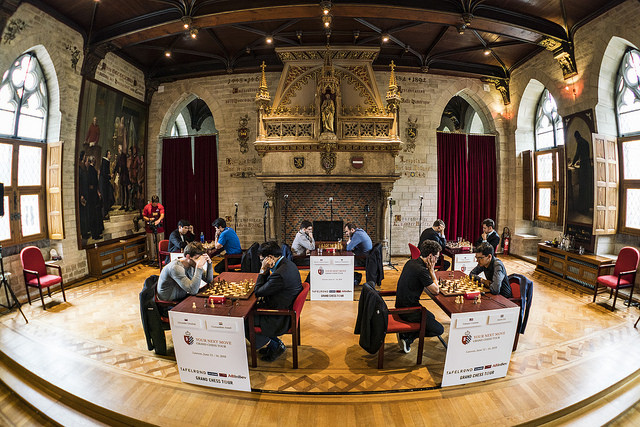 You can replay all the rapid games using the selector below:

And here’s the live coverage of Day 3 in Leuven:

Wesley So retains his cool 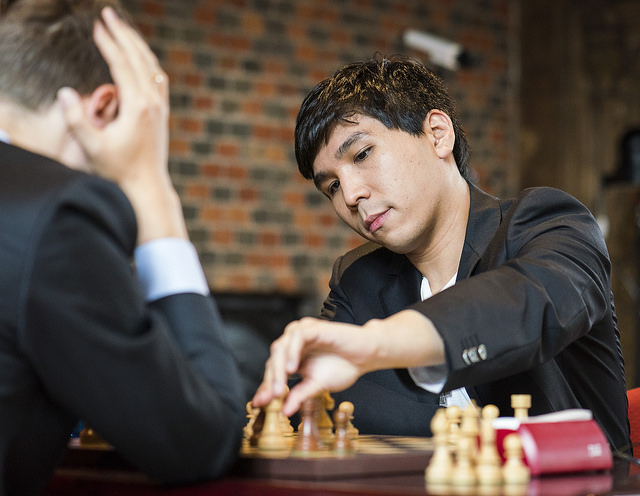 Things couldn’t have been going much better for Wesley in Leuven until a strange incident threatened to upset that balance on the eve of Day 3. Accusations were posted online that Wesley So had responded to an abusive message at a chess website with extremely unpleasant abuse in return. Normally we would ignore such posts until any facts were established, but in this case Wesley himself felt the need to respond. In a Facebook post where he notes he was woken up in the middle of the night to be shown the messages, he says his account had been hacked:

If someone was, as Wesley assumed, “trying to derail” him, it didn’t work, as the first game of Day 3 couldn’t possibly have gone better for him – or worse for Nakamura!

Hikaru opened with the London System, which while perhaps not a lethal weapon is not an opening in which you often see an elite player all but lost by move 10! 7.Qb3? seems to have been a bad mistake, compounded by 9.Bd6?, and after 9…Ne4! things were already falling apart:

That knight is not merely targeting the d6-bishop but the f2-pawn, and, if White does nothing, after capturing on f2 Black will give a check with the queen on f6 and pick up the unfortunate rook on a1. There was nothing better than 10.Qb2, and after 10…Nxd6 11.cxd6 Qf6! Hikaru traded into a miserable ending. You might call him a glutton for punishment, as he played on as his pieces continued to get lost in multiple painful ways, with 26….Kc5! perhaps the most attractive:

There was no coming back, and he eventually resigned what he called a “horrendous” game on move 34.

Wesley never looked back, taking a comfortable draw against 2nd place Sergey Karjakin in the next round to win the rapid section with a round to spare. He finished with a quick draw against Vishy Anand that meant he'd scored 5 wins and 4 draws, just as he had a year ago. In fact he even matched his performance day-by-day, with two wins on the first two days and “only” one on the last.

Jockeying for position before the blitz

You might say Hikaru never looked back either, though, since he channelled his frustration into wins against Vishy Anand and then Shakhriyar Mamedyarov. The Vishy game was visually appealing as Hikaru, with White, managed to put all his pieces on light squares, while Vishy almost did the same with Black:

It may have been a fortress, but persistence paid off for Hikaru, who squeezed out a win in 74 moves, and remained "in the zone" to convert a double-edged position against Mamedyarov where it was unclear whose passed pawns were more dangerous. 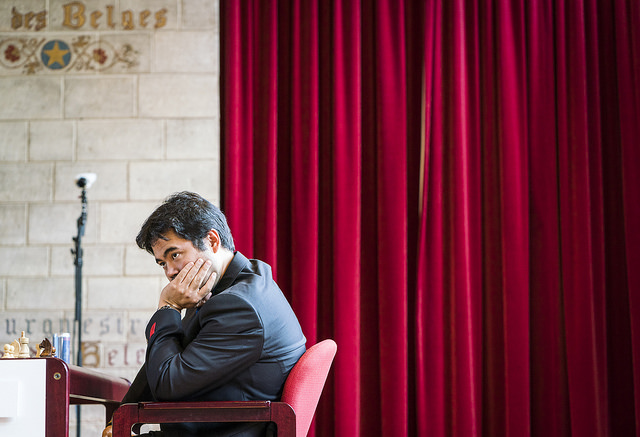 Hikaru Nakamura was in combative form on and off the chessboard | photo: Lennart Ootes, Grand Chess Tour

It was the first time a player other than So had won two games on the same day this year, and Hikaru was emboldened to dismiss the 4-point gap between him and Wesley before the blitz as “manageable” – “it’s on the upper limit of where you want to be”. He went one step further shortly afterwards, when he commented of So:

He’s not the best blitz player here. There are several of us who I think are much better blitz players than Wesley.

Those were fighting words which would soon be challenged by the third member of the US triumvirate (all recently confirmed with Sam Shankland and Ray Robson as playing in the 2018 US Olympiad team). Caruana matched Nakamura in winning two of his games, both with Black and both massacres. 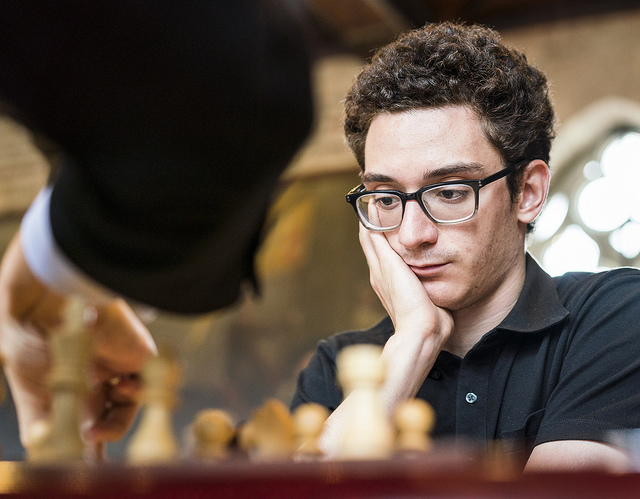 Fabiano Caruana said he hadn't written off his own chances, despite trailing So by 7 points | photo: Lennart Ootes, Grand Chess Tour

His victims were Anish Giri and then the previously unbeaten Sergey Karjakin, who got tangled up in more of Fabi’s Petroff webs. How about this for a dominant bishop pair!

White is a pawn up, but the computer gives Black an almost 4 pawns advantage. It wasn’t all sweetness and light for Fabi, though, since he also got blown away by Levon Aronian. He summed up:

I’ve committed suicide in a few games – some were just embarrassing! My game against Levon… I don’t want to think about it.

He bristled, however, at Hikaru’s suggestion that there were several players among them who are much better at blitz than Wesley:


I don’t think that Wesley is a worse blitz player than Hikaru - at all! Isn’t he higher rated? He also won the Norway Chess blitz.

Fabiano had also seen his speed chess skills denigrated by his teammate, with Hikaru giving Magnus Carlsen a 75-80% chance of winning the upcoming World Championship match, with 10% of that because, “Fabiano has absolutely no chance if it goes to tiebreaks”.

In terms of fact-checking, though, while Wesley has now leapfrogged ahead of Hikaru on the live list for rapid chess… 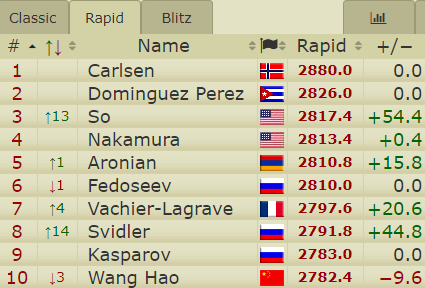 …for now Nakamura does lead in blitz: 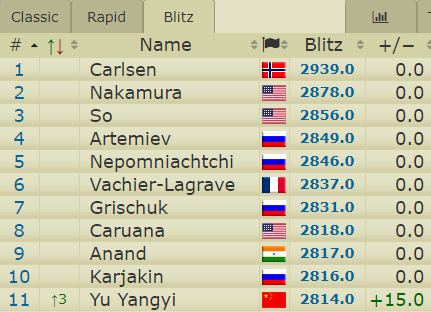 Of course that can change dramatically in the next couple of days!

Among the other players Vishy Anand and Anish Giri both suffered two losses and then took quick draws in the last round to end the pain. They remained rock bottom. 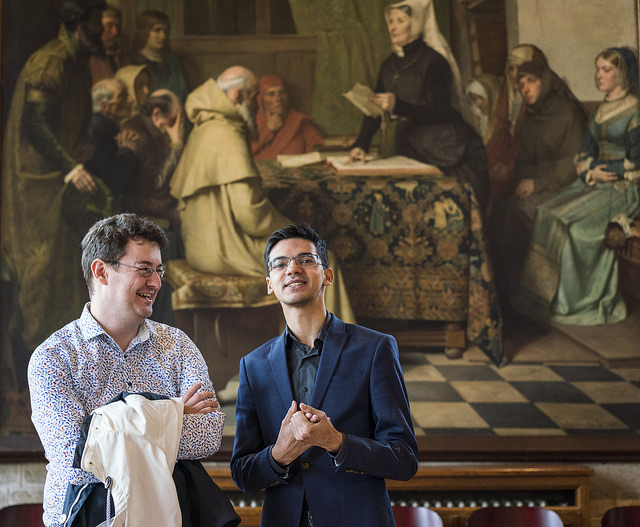 Others who had suffered did better – we’ve already seen that Fabi picked up two wins, while Grischuk scored 4/6 and could have made it more if not for an amazing 120-move save by Mamedyarov. MVL is right where he’d want to be before the blitz, and despite not having fired on all cylinders yet he remains unbeaten. 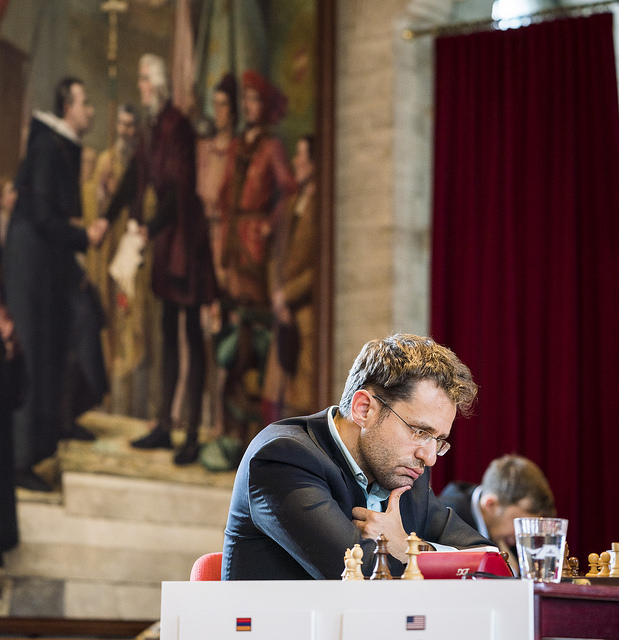 No-one managed to push Wesley, though, since Levon Aronian’s bold attacking play against Sergey Karjakin in the first round backfired badly, then in the final round, when Karjakin could have cut So’s lead to two points, he instead went on to lose to Caruana. That left the following scoretable:

The time control for the remaining 18 games will be 5 minutes for all moves plus a 3-second delay, with some losses on time likely to enter the picture. Can Wesley keep up his form? And how will the grudge games between the US stars go? 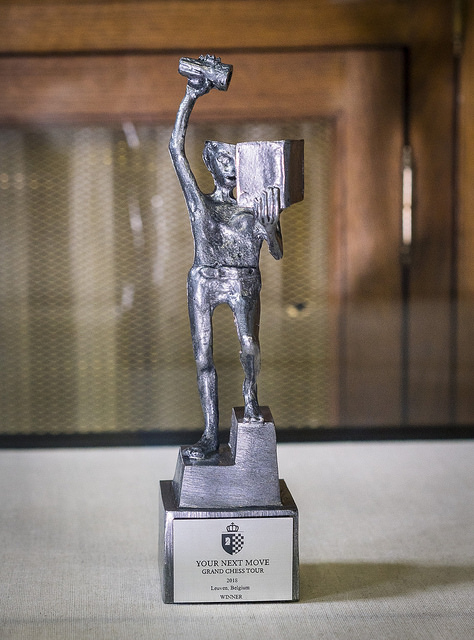