Magnus Carlsen ground three former World Champions into dust and outwitted Anish Giri in the opening to win all four games on Day 2 of the Your Next Move Grand Chess Tour. That spectacular run undid all the damage done on the first day to make the current World Champion the sole leader after the rapid section in Leuven. Wesley So is only a point behind, though, and with no player entirely collapsing the tournament remains wide open with no less than 18 blitz games to go. 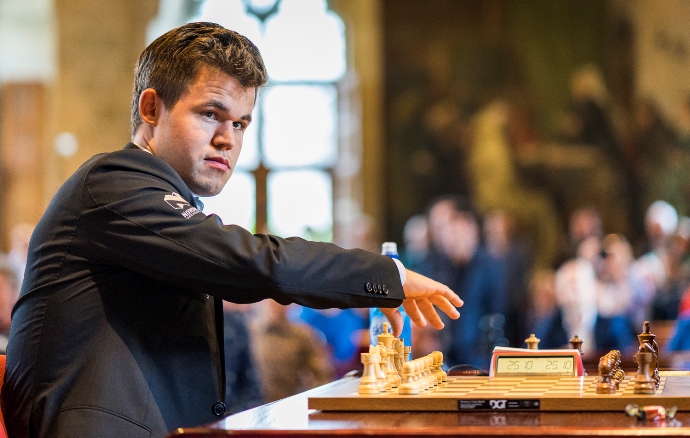 Replay all the games so far from Belgium:

Relive the live commentary with Jan Gustafsson and Anna Rudolf, including interviews with many of the players: 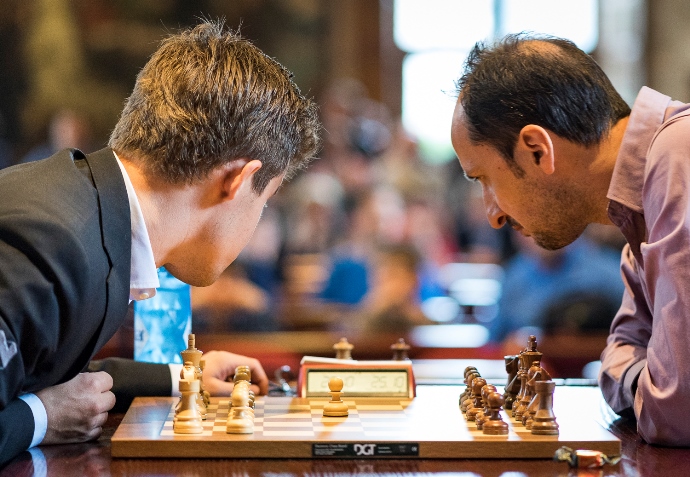 How many chess players does it take to change a chess clock? | photo: Lennart Ootes

At first there was nothing too remarkable. Carlsen gradually outplayed Veselin Topalov in an ending to win his first game of the day, but although it was a good start he was matched by Vishy Anand, who increased his lead over the field with a sharp victory over Anish Giri. 26.e6! was a nice final touch: 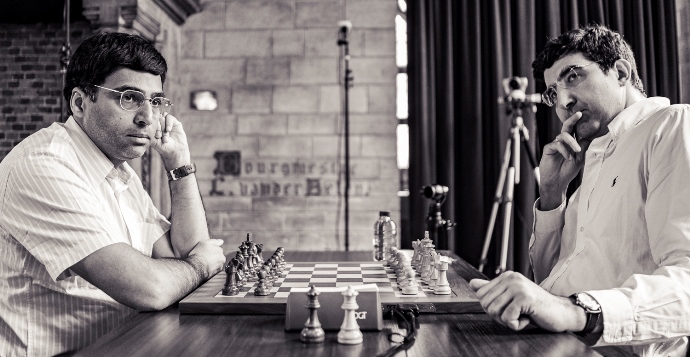 Kramnik picked up his only win of the day against the man who took away his World Championship title | photo: Lennart Ootes

In Round 2, though, Vladimir Kramnik ground out a win against Anand while Giri misplayed the opening and resigned on move 23 against Carlsen. The Norwegian was only a point behind and had some time to rest, though he first came to talk to Jan and Anna, explaining how he’d got over his terrible end to the previous day:

Well, I was really pissed for about an hour, and then I stopped caring, a little bit. I don’t really care today either, but it doesn’t seem to affect my play so far! Sometimes that’s just what you need – to loosen up a bit.

You can watch the whole interview below:

The following game was a masterpiece against Magnus’ old rival Vishy Anand. In an Anti-Berlin Carlsen already had very long-term hopes when he put a pawn on a5, and then he judged that he could keep pressing if he exchanged queens:

Anand spent a lot of time before his matches against Carlsen preparing to withstand just such slightly worse positions, but he was outmanoeuvred once again. Magnus knew he was winning after 30…Kh7? 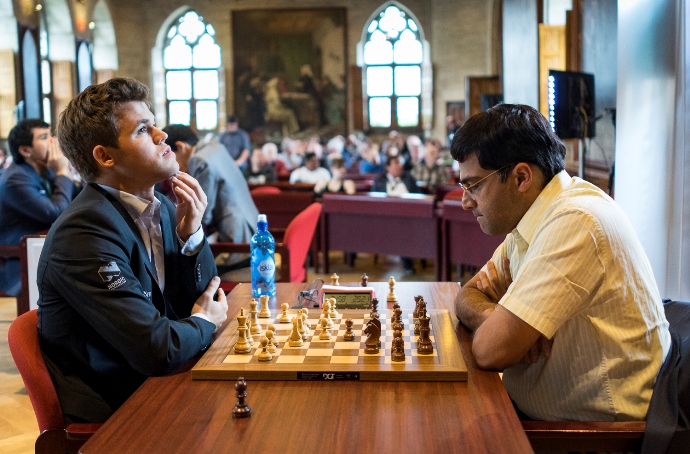 The icing on the cake was beating another ex-World Champion and great rival, Vladimir Kramnik, in the day’s final round. Carlsen was rewarded for keeping the position highly unbalanced, with Kramnik missing nuances until he found himself in a clearly lost endgame. He put up fierce resistance, though, and Magnus said he was unable to see a win in the following position:

Kramnik had to play 47.Ne4!, but instead was tempted by the “fortress” after 47.Nxd5? Bxd5 48.g5. Alas, he’d missed something simple and was soon forced to resign. 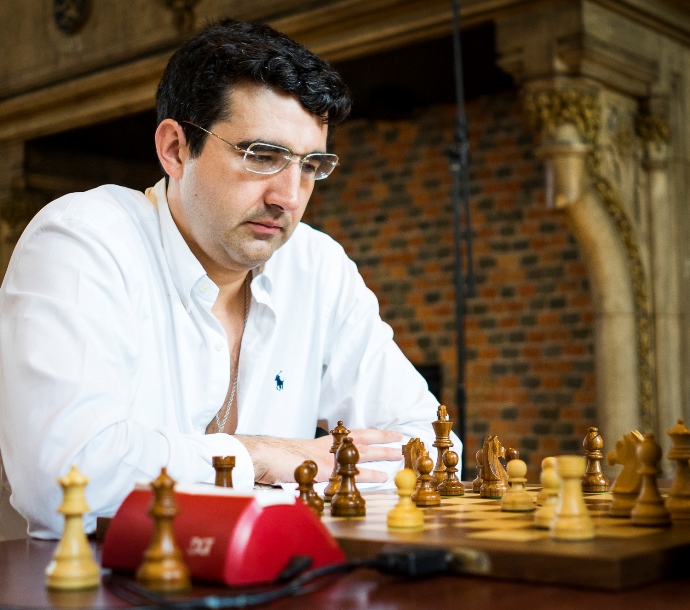 Not a great day at the office for Vlad, but a strong fashion statement... | photo: Lennart Ootes

This was the final day of rapid chess for the 2016 Grand Chess Tour, and the players were drawing conclusions. Although we witnessed almost none of the outright blunders we’d seen on Day 1, the players were united in the opinion that the schedule, with four or five 25 min + 30 sec games a day, is hard to deal with.

Yesterday I started out with two pretty hard-fought draws. I spent a lot of energy on my games and towards the end I was pretty tired. Of course that’s not an excuse for dropping pieces here and there, but I think for everybody playing five rapid games - that’s tough! I’d say much tougher than a day of classical chess. 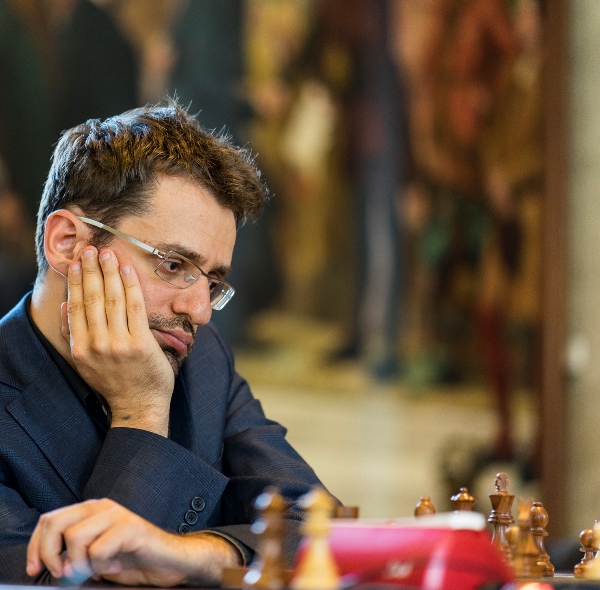 It’s harder to recover from losses, or missed opportunities, so you kind of get emotionally tired, not physically, and I guess the low quality of certain games, including many of mine, has shown that the players are not recovering so well.

[In blitz] you care much less. You know it's blitz - you're going to blunder! Rapid is kind of halfway. You're still upset, as would happen after losing a classical game, but as in blitz you have very little time to recover. 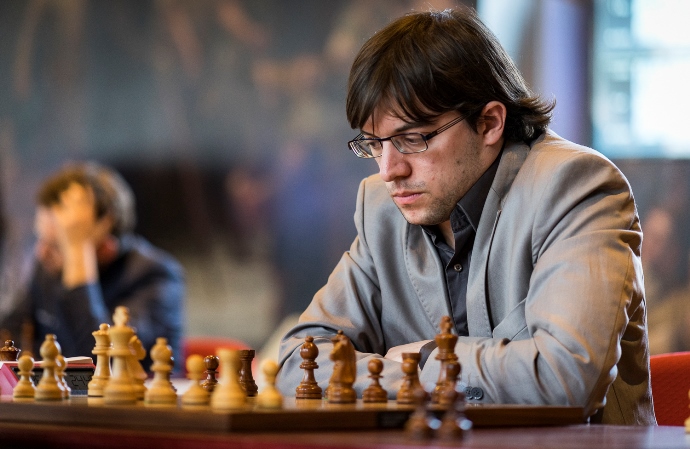 Maxime failed to get a win on Day 2, but is still a dark horse for the blitz section | photo: Lennart Ootes

Playing five rapid games, especially at this time control, requires much more energy. There are many more critical points, much more excitement, which is not good for your body… It’s fine, but I'd rather either have three days of play in the rapid, or a faster time control like 15+10 or even 15+5.

, but what do you think as chess fans? Would you prefer an accelerated format rather than the 6-7.5 hours days we’ve had in the last two weeks? Let us know in the comments below.

Now let’s get back to the actual chess!

It was a curious day in Leuven, since all but one of the players had at least one win to boast about. MVL was the unlucky man out, though he did come incredibly close: 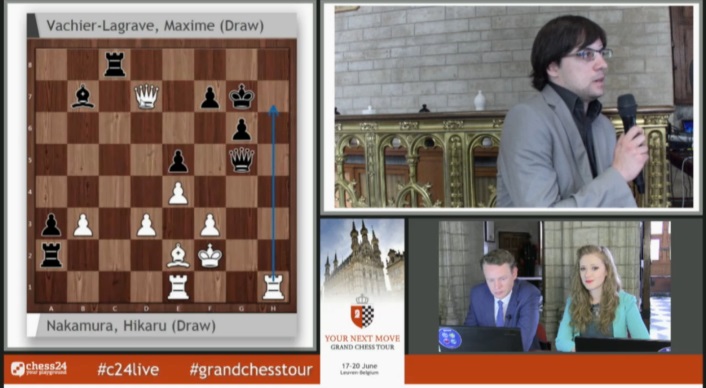 MVL drew that game and two more, but then found himself improving Giri’s mood and health by losing a rook ending in the final round:

Wesley So can be happy with his work in Leuven so far, since he’s now the only unbeaten player and is just one point behind Magnus in second place. He had another quiet day with three draws and one win over Veselin Topalov. 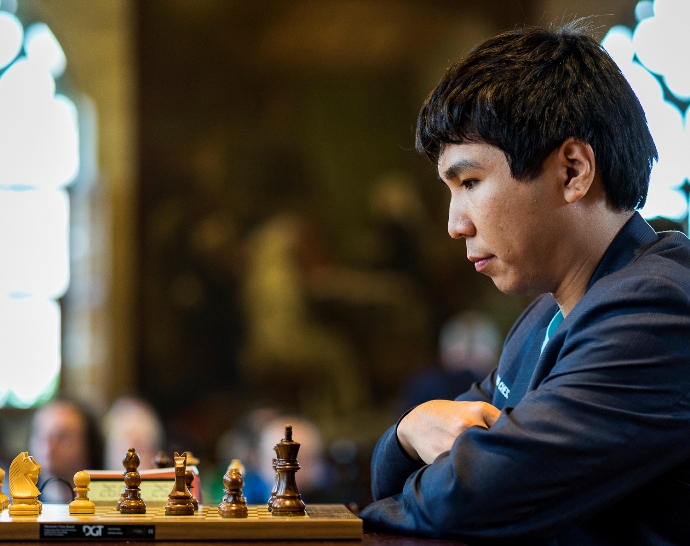 When he talked to Jan and Anna he explained his safety first approach, though it was a surprising admission:

Perhaps, though, it’s just ambition concealed behind modesty, or do we really think, for instance, that Wesley doesn’t have many ideas in the opening?

In any case, after his rapid performance in Paris and Belgium he won't need to worry so much about opponents targeting him due to his low rating: 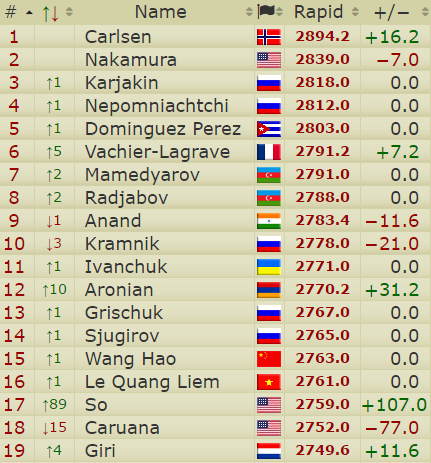 So the standings look as follows before we switch to 18 rounds of blitz: 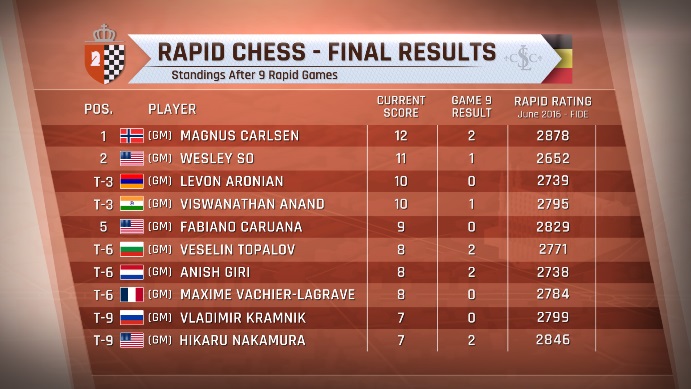 As you can see, four players are within two points of Magnus, while even Kramnik and Nakamura are still within striking distance if they can go on a winning streak – something that you certainly wouldn’t rule out Hikaru doing after his performance in Paris.

It was put to Carlsen that he’d suffered one bad day during the Paris blitz:

I’m really hoping that I already did away with my bad day here in Leuven!

Don’t miss the action as it continues at 14:00 CEST on Sunday 19 June, with Jan Gustafsson and Anna Rudolf again commentating live here on chess24. You can also follow all the tournaments at chess24 using our free mobile apps: