“He’s played supremely well” was Nigel Short’s verdict as Wesley So beat Fabiano Caruana and Shakhriyar Mamedyarov to take the lead after Day 1 of the Your Next Move Grand Chess Tour in Leuven. It was déjà vu, since Wesley started fast in 2017 as well only to eventually finish 2nd after Magnus Carlsen dominated the blitz. Magnus is missing this year, though, and so far Sergey Karjakin and Levon Aronian are the only other players on a plus score after a day of huge missed opportunities. 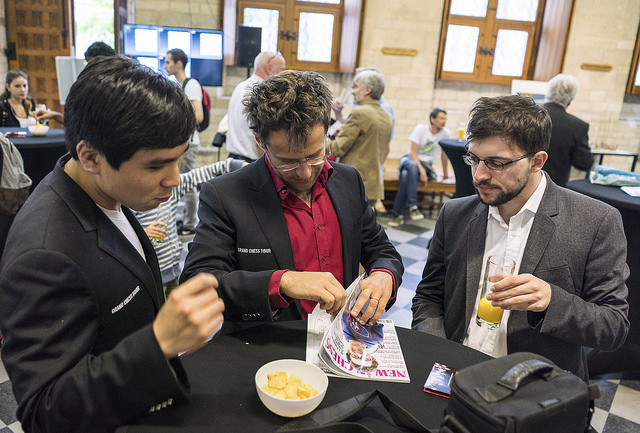 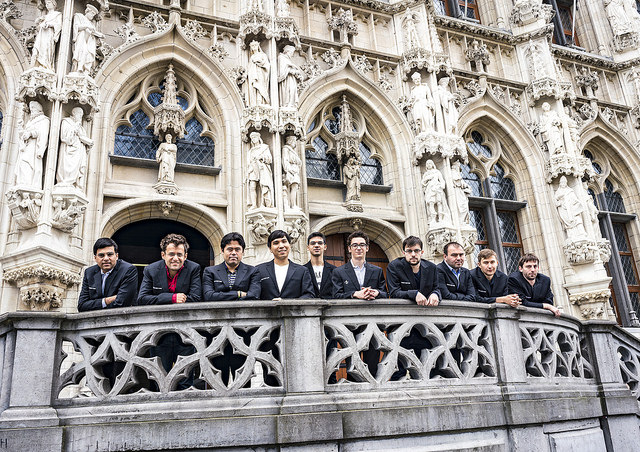 You can play through all the games so far and check out the pairings using the selector below:

And you can replay the live commentary from Yasser Seirawan, Jovanka Houska and Alejandro Ramirez in St. Louis, with Maurice Ashley joining from Leuven: 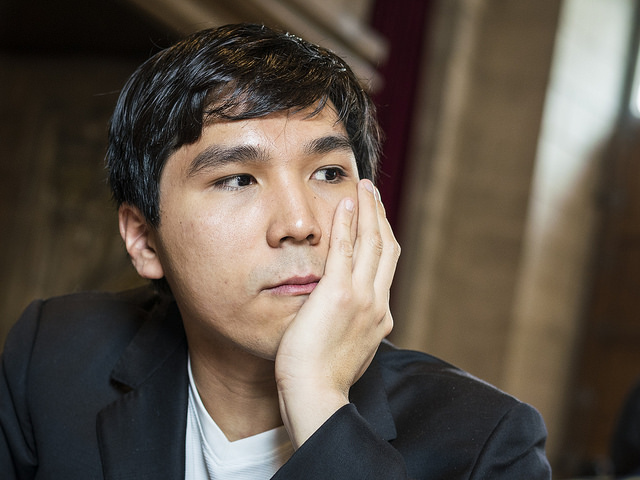 When it comes to winners it’s simple. The one clear winner on the first day of the 2018 Grand Chess Tour was Wesley So. The 24-year-old ended the recent Altibox Norway Chess on a sour note by losing a game in which he had serious winning chances and then should have drawn just after the time control. His opponent, Fabiano Caruana, finished first and stole all the glory, while Wesley finished only fifth despite winning the opening blitz and getting his first ever classical victory against Magnus Carlsen. On the bright side, he didn't need to wait very long for revenge! 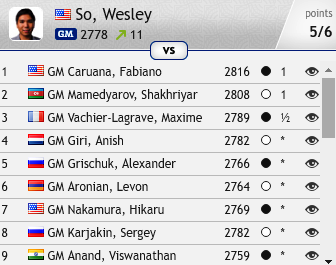 He once again had Black against Fabiano, but this time he went on to smoothly outplay his opponent in a technical game that ended up as a massacre. This was the final position after 48…Rxg4!

It was a similar story against Shakhriyar Mamedyarov and Maxime Vachier-Lagrave, and while Shak came close to saving himself, 2.5/3 was a fair score overall, given how close MVL came to defeat. 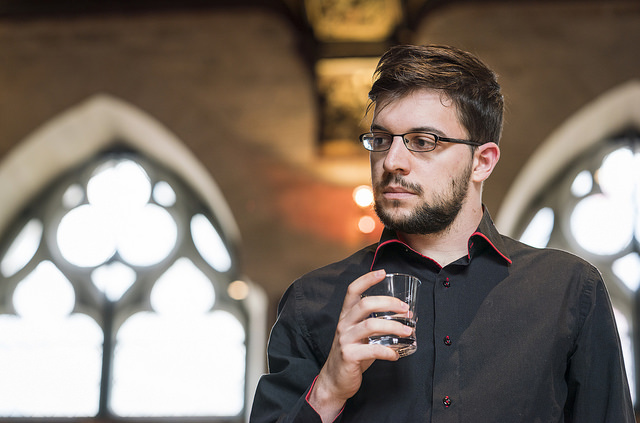 MVL finished with three draws, after being more or less lost in each game! | photo: Lennart Ootes, Grand Chess Tour

First off, I’d like to thank the Lord for giving me a great start first day. Looking at the pairings last night I had two Blacks and then White against Shak. These guys are all higher rated than me, and I thought 50% would be a good result, actually maybe a great result, but having +2 is just so much better!

When there was talk of Wesley becoming a rapid and blitz specialist he noted how much more important fast chess is becoming:

I have a feeling rapid and blitz will become more popular in the upcoming times, so players are going to have to get used to it now. It’s not all about classical chess anymore!

He’s played supremely well. I’ve been very impressed with his games and he was even pressing in the last game, which he wasn’t able to win. He’s been in excellent form… 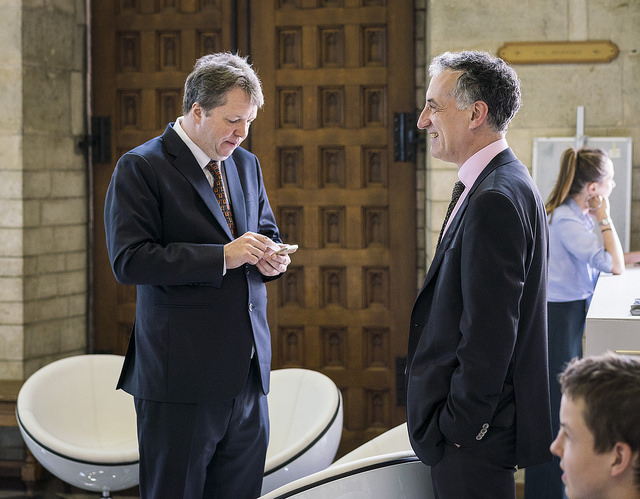 The start was an echo of last year, when he also drew MVL and got wins over Vladimir Kramnik and a certain Magnus Carlsen. He would go on to win the rapid section, but then finish a full three points behind in second place after the World Champion posted a phenomenal blitz performance. That won’t happen this year, since as Wesley said at the end of his interview with Maurice Ashley, apropos of nothing, “And no Magnus here…” 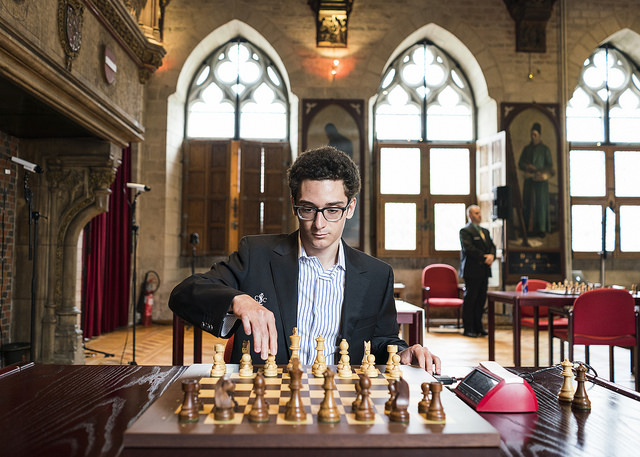 When it comes to losers it’s also quite straightforward, since only Fabiano Caruana and Vishy Anand finished below 50%, with one draw each. Fabiano had clearly the worst day, though – to finish that Nigel Short quote:

…whereas Fabiano Caruana, who of course has his World Championship match coming up later in the year, wherever that may be, he’s had a bit of a shocker. He’s been butchered in a couple of games, firstly by Wesley So and this last game now was horrific against Grischuk. He was annihilated really right from the opening.

Fabiano called the last game against Grischuk, the only decisive game of the final round, “especially sad”, since he said he’d had a normal position and blundered it away with 12…Bf6. What was perhaps sadder was that the computer disagrees and thinks the point of no return came on move 14:

After 14…Bxf3?, played in 3 seconds, it really was all over. 15.gxf3! may have been best, but after 15.Bxd6 Bh5? 16.Bc7! it was painful to look at Black’s position. Instead after 14…Ne4! it seems Black could limit the losses to a single pawn and retain decent drawing chances.

Fabi mentioned he also missed chances in the 2nd game against MVL, and the biggest moment was after 33…Rc5:

Vishy Anand finished on the same number of points as Caruana, but his day involved only one painful loss – slowly getting ground down in a quiet position by selfie buddy Anish Giri: 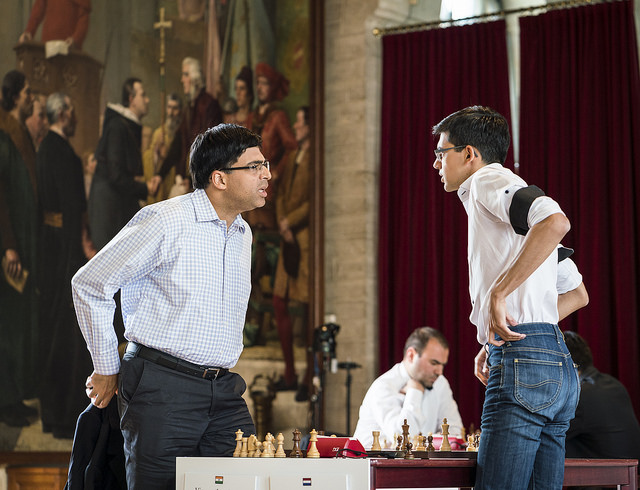 The other loss was a fine game by both Vishy and his opponent Shakhriyar Mamedyarov, who here unleashed a brilliant blow you had to believe in more than calculate:

21…Bxg2!! eventually led Shak to his first win since toothache struck before Norway Chess, though Vishy gave as good as he got and fought back to an equal position before eventually losing a tricky ending. 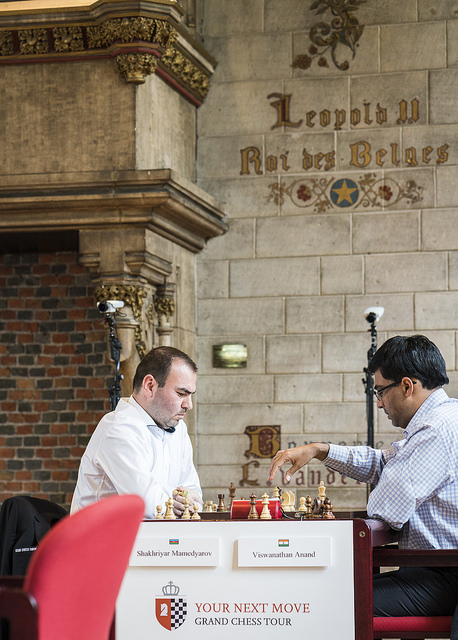 The most memorable part of the day, though, was perhaps the misses, and two stood out. Mamedyarov had this position after Anish Giri’s 26th and 28th moves, and it became the final position of a game that ended in a draw by 3-fold repetition: 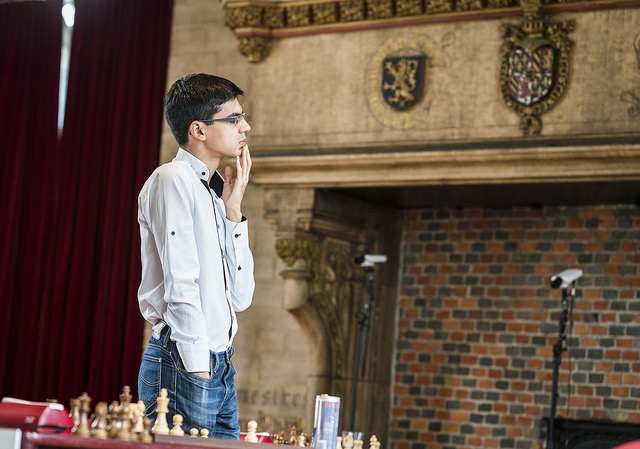 At least that game ended in a draw. Alexander Grischuk missed a huge chance against Sergey Karjakin, who commented afterwards:

I played 34.d4? and next second I realised that I blundered, and also it was very critical, because he was thinking for maybe 30 seconds here, but he didn’t find it. Of course I was lucky! 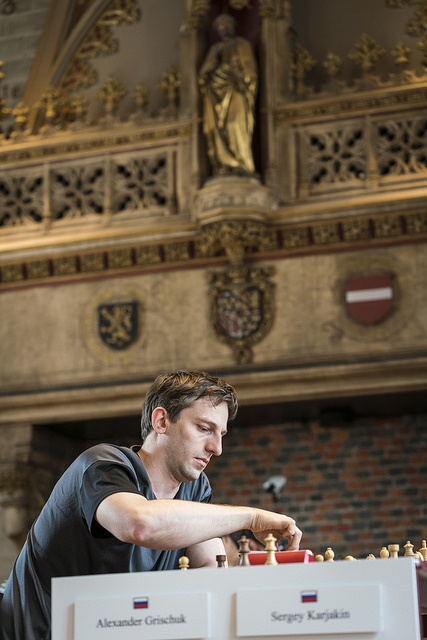 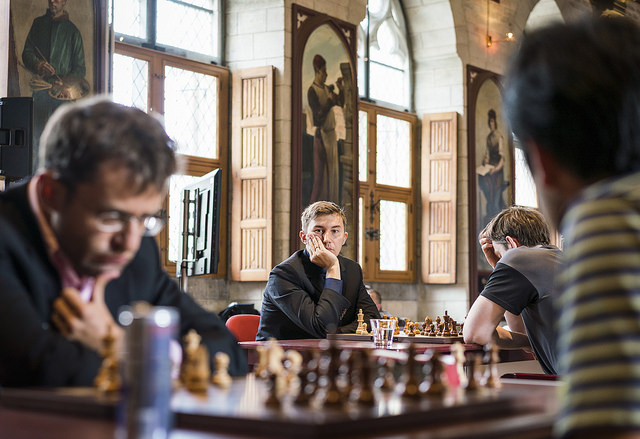 "I'm not worried about my position at all, Alexander" | photo: Lennart Ootes, Grand Chess Tour

The standings look as follows after Day 1 (rapid is worth 2 points for a win and 1 for a draw):

We have two more days and six rounds of rapid before two days and 18 rounds of blitz, with everything still to play for. Make sure to tune in to the show from 14:00 CEST each day! 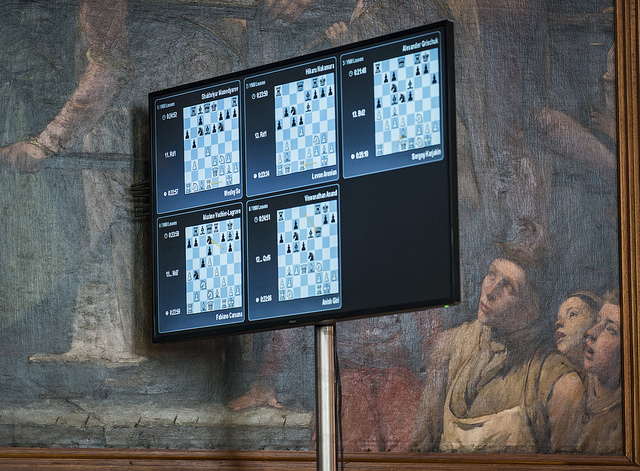 Make sure you're among the spectators! | photo: Lennart Ootes, Grand Chess Tour