Leko and Svidler to commentate on Chess Olympiad

The 44th FIDE Chess Olympiad will be opened in Chennai, India today by Indian Prime Minister Narendra Modi, with the games beginning tomorrow, Friday July 29th. Magnus Carlsen and Fabiano Caruana are among the players in action, and we’ll be broadcasting every game live from both the Open and the Women’s section, with video from the playing hall and commentary from Peter Svidler and Peter Leko. 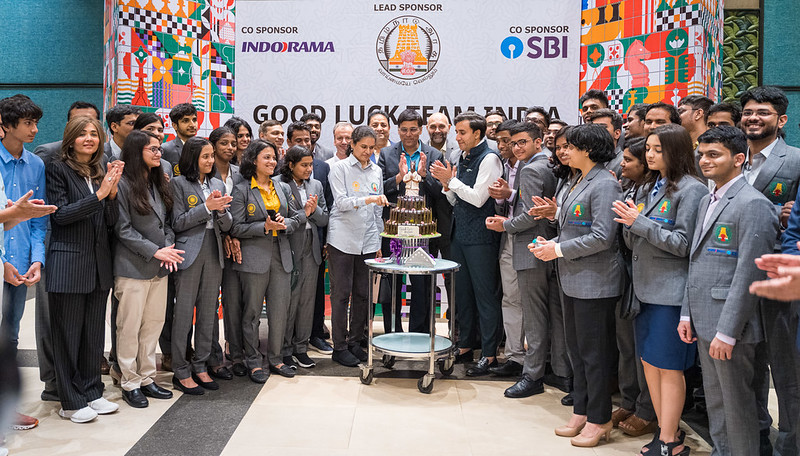 There are no less than 6 Indian teams as the 44th Chess Olympiad is about to start in Chennai | photo: Lennart Ootes, FIDE

Where is the Chess Olympiad being played?

The 44th Chess Olympiad is taking place in the Four Points by Sheraton Hotel in Mahabalipuram, a town spread along the coast south-east of Chennai, the capital of the Indian state of Tamil Nadu. 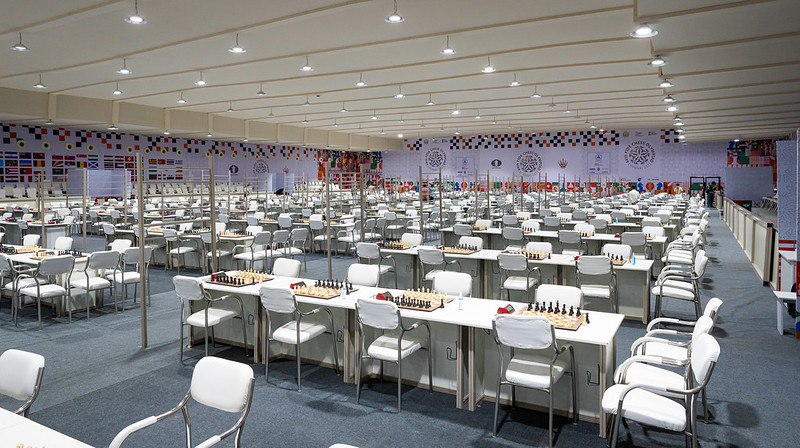 The Olympiad is a massive undertaking, but the venue looks ready! | photo: Lennart Ootes, FIDE

The tournament was originally supposed to take place in Minsk, Belarus in 2020, but the pandemic forced a delay and civil unrest in Belarus saw the tournament moved to Moscow. Then Russia’s invasion of Ukraine forced another last-minute switch of venue.

It’s been a rocky road, but Chennai, the city that hosted the Anand-Carlsen World Championship match in 2013, seems to be an ideal venue. You can get some idea of the enthusiasm for the event from the Olympiad anthem…

…and by a video shared by the Chief Minister of Tamil Nadu, M. K. Stalin.

When does the Chess Olympiad start?

The Opening Ceremony of the Chess Olympiad takes place today at around 16:30 IST (13:00 CEST) in the 40,000 capacity Jawaharlal Nehru Stadium in Chennai, with Indian Prime Minister Narendra Modi opening the event. That’s a big deal, and also means a huge security operation in the city. 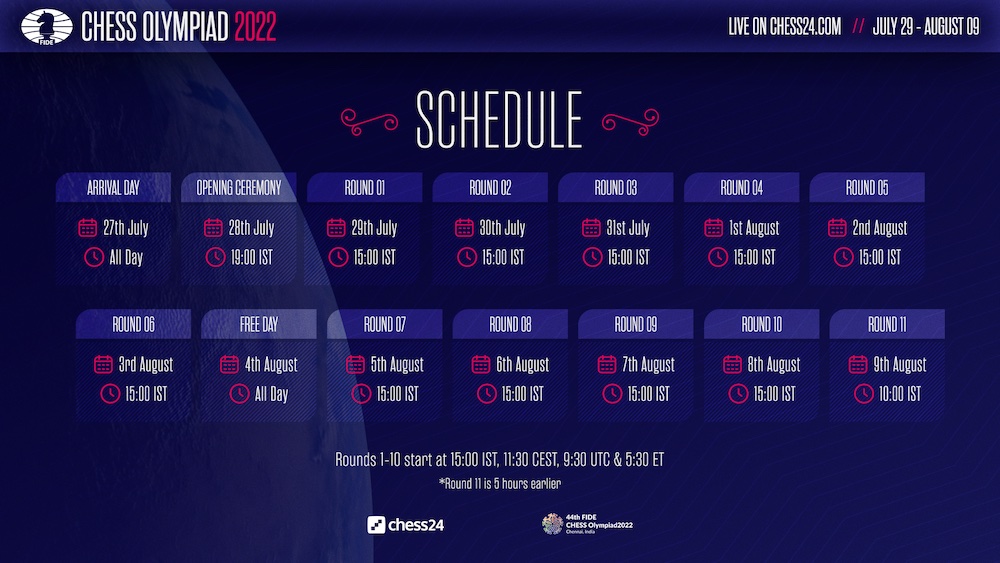 What’s the format of the Chess Olympiad?

The Olympiad features two sections, the Open and the Women’s, where national teams compete in a Swiss Open (teams on the same number of points are paired against each other) over 11 rounds. For each match teams select four players out of a team of five, with two match points for a win, one for a draw and zero for a loss.

Who is, and isn't, playing in the Chess Olympiad?

There are over 1700 players in the Olympiad, representing almost 350 teams. Compared to the last Olympiad in 2018 it’s grown again, with preliminary figures (some teams always fail to show) suggesting the Open section has increased from 185 teams to 188, while the Women’s has grown from 151 to 162.

That’s not the full story, however, since we’re missing a lot of players at the top. In 2018 there were 33 2700+ players, while in 2022 there are just 15. That’s mainly down to the absence of two perennial favourites, China and Russia.

China (Ding Liren, Wang Hao, Wei Yi, Yu Yangyi, Bu Xiangzhi) are defending champions in both the Open and Women’s Olympiad, but won’t defend their titles, apparently due to the pandemic and related travel restrictions.

Russia (Ian Nepomniachtchi, Sergey Karjakin, Alexander Grischuk, Dmitry Andreikin, Nikita Vitiugov, Kirill Alekseenko, Daniil Dubov, Evgeny Tomashevsky) have almost always been the favourites on paper, though they’ve failed to win since 2002. This year the team (together with Belarus) was excluded after the Russian invasion of Ukraine.

There are also some other stars missing. Alireza Firouzja and Maxime Vachier-Lagrave decided not to play for France, Hikaru Nakamura won’t bolster the US team still further, Vishy Anand is mentoring the Indian teams rather than playing, while the semi-retired Veselin Topalov doesn’t play for Bulgaria.

Teimour Radjabov dealt a blow to Azerbaijan, who went from 2nd seeds to 6th seeds after he pulled out, citing the after-effects of a COVID infection.

Richard Rapport, who’s planning to switch to the Romanian Chess Federation, hasn’t finished the paperwork but won’t represent Hungary, while Liem Le can’t play for Vietnam as there’s no Vietnamese team at this year’s event.

Who are the favourites to win the Chess Olympiad?

The huge favourites to win the 2022 Chess Olympiad are the USA, who in Fabiano Caruana, Levon Aronian and Wesley So have three of the top four players in the event. They're the only team with an average rating of their best four players above 2770, and there's a 75-point gap to the next best team. 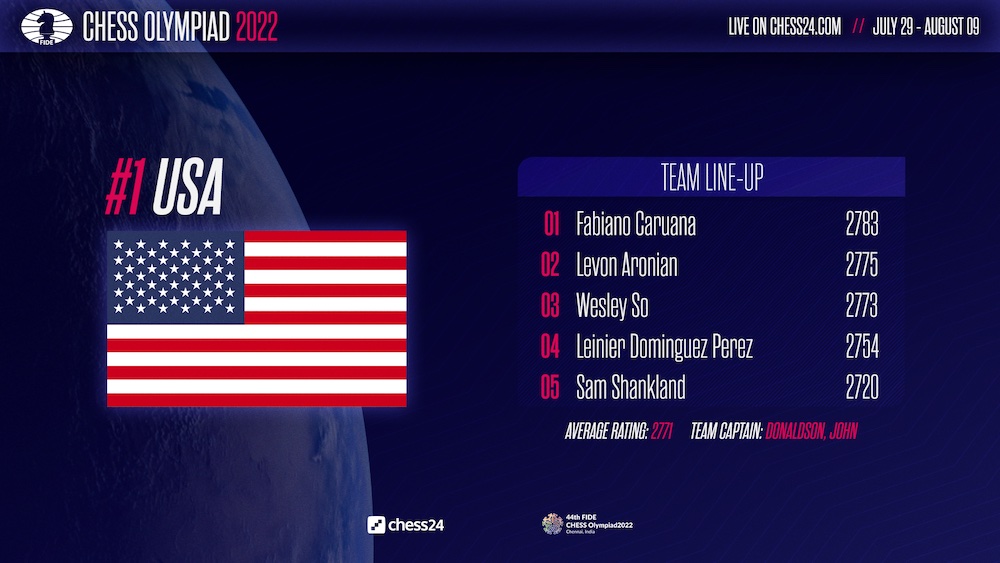 The absence of the likes of Russia and China means, however, that if the USA show any signs of weakness there’s a big group of teams that could challenge for gold. The 2nd seeds are, in fact, hosts India, who have gone for a mix of youth and experience. 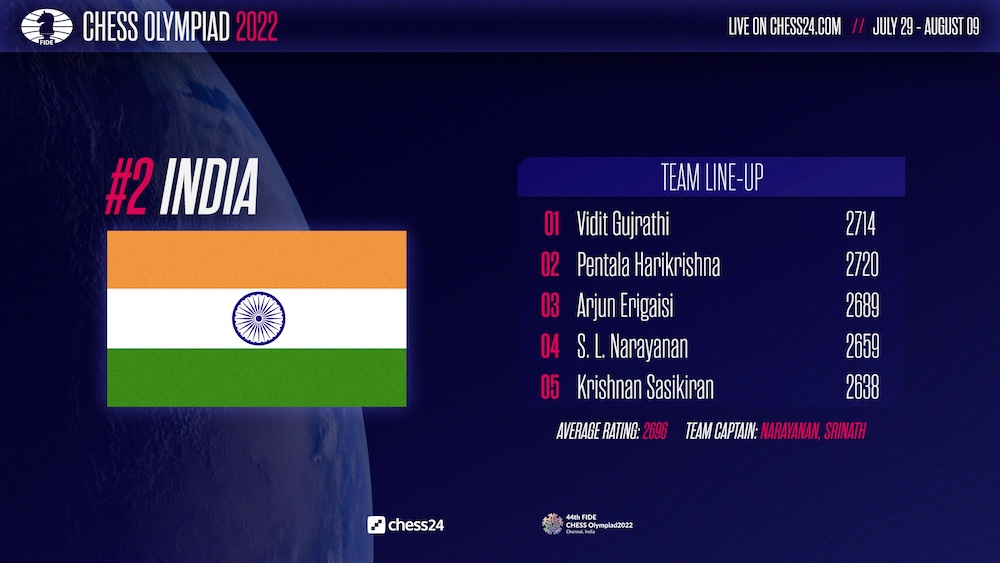 It could be a huge Olympiad for India if they can withstand the pressure. As well as the 1st team, India have a 2nd team where they’ve put most of their young talents (Gukesh, Nihal Sarin, Praggnanandhaa, Adhiban, Raunak Sadhwani). The team is ranked 11th, but would be much higher if the rating of their experienced star Adhiban hadn’t dropped so far from his 2701 peak. 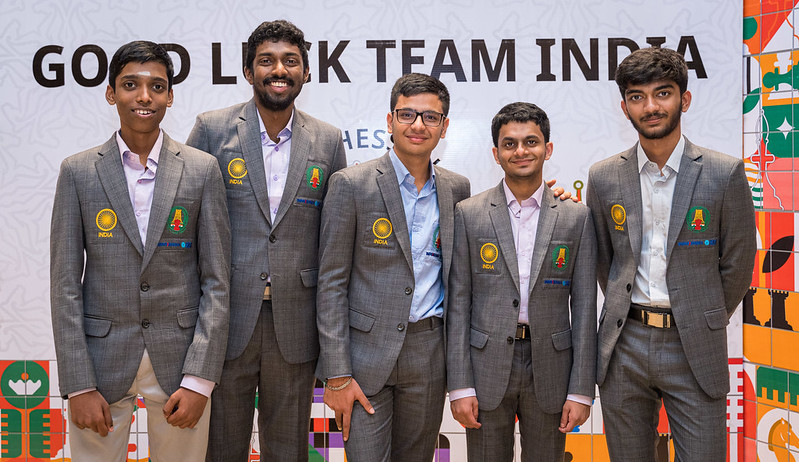 The Indian B team of Praggnanandhaa, Adhiban, Sadhwani, Sarin and Gukesh are dark horses to win the whole event | photo: Lennart Ootes, FIDE

3rd seeds are Norway, something that would have been impossible to imagine before the arrival on the scene of Magnus Carlsen. The world no. 1 skipped the 2018 Olympiad, but will be eager to try and justify Norway’s ranking as expected podium finishers. 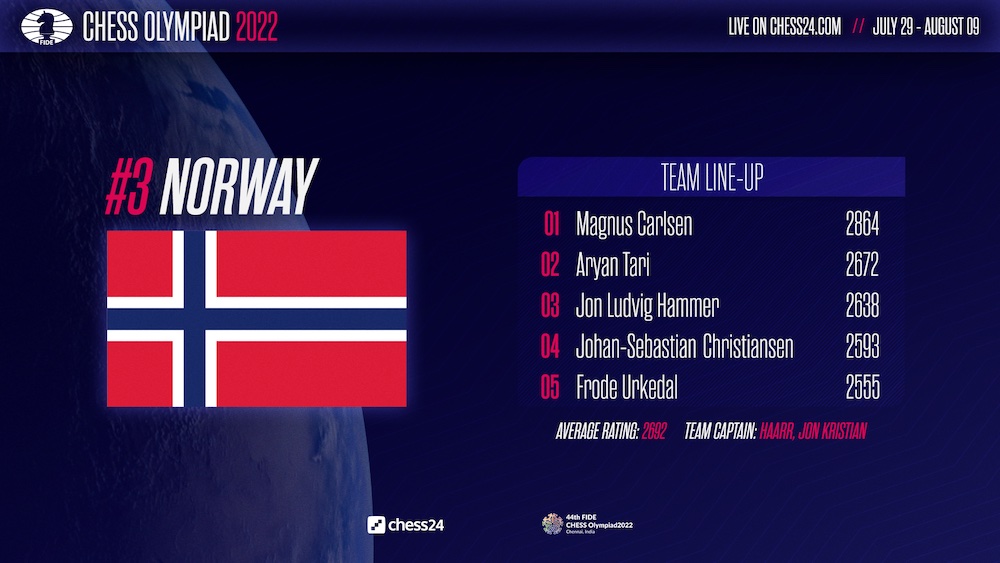 As mentioned, however, there are many teams who can challenge. Poland were in extraordinary form and unlucky to finish only 4th in 2018, but this time round the likes of Poland and Spain will be close to medals if they just perform as expected, while an emotional Ukrainian victory can’t be ruled out.

For the Women’s Olympiad, hosts India are top seeds for the first time, with Humpy Koneru the top-rated player in the event, while Harika Dronavalli is planning to play despite being 8 months pregnant. 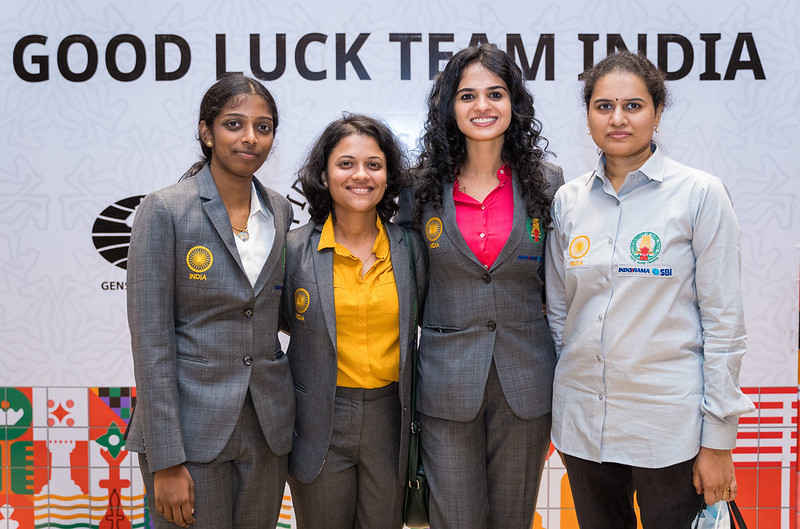 Traditional women’s chess powerhouses Ukraine and Georgia are likely to make things tough for India, however.

Where can I watch the Chess Olympiad?

Here at chess24 we have by far the best broadcast platform for team events, and for the Chess Olympiad that means being able to follow all the matches live at a glance.

Even better, we’ve got the full rights to show video of the players, and we’ve got an embarrassment of Peters in our commentary team! Peter Svidler, who’s won the Olympiad five times, and Peter Leko, who’s twice finished 2nd with Hungary and also won individual gold, will be commentating on all the action. 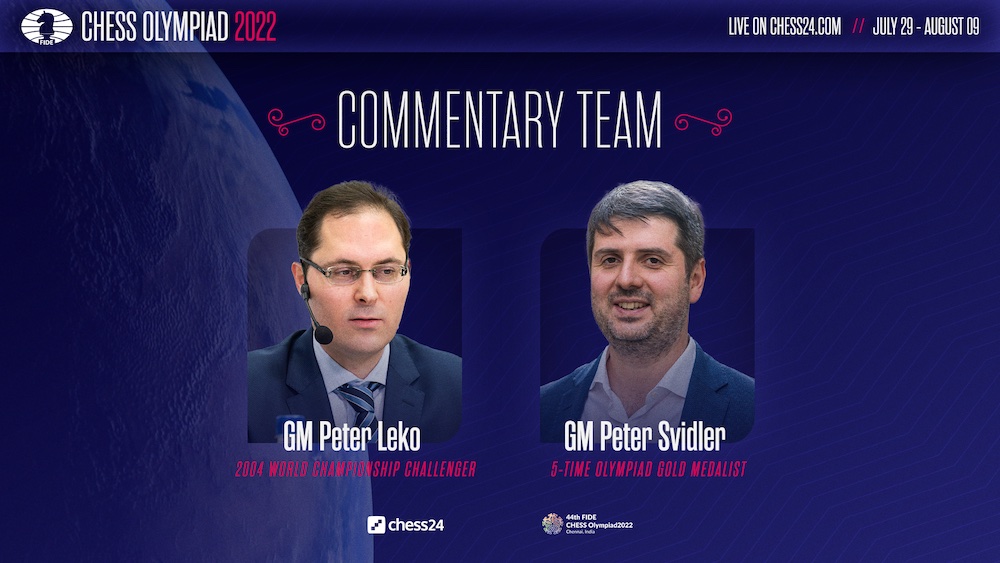