Vietnam’s Le Quang Liem won with Black in the final round of the HDBank Masters to claim his home event with 7/9, half a point ahead of seven players who included the Chinese trio of Wei Yi, Bu Xiangzhi and Wang Hao. Top seed Wei Yi recovered with three wins in a row after his Round 2 loss, played a brilliant game against Xu Yinglun (Jan Gustafsson analyses it for us) but was let down by draws against his main rivals. 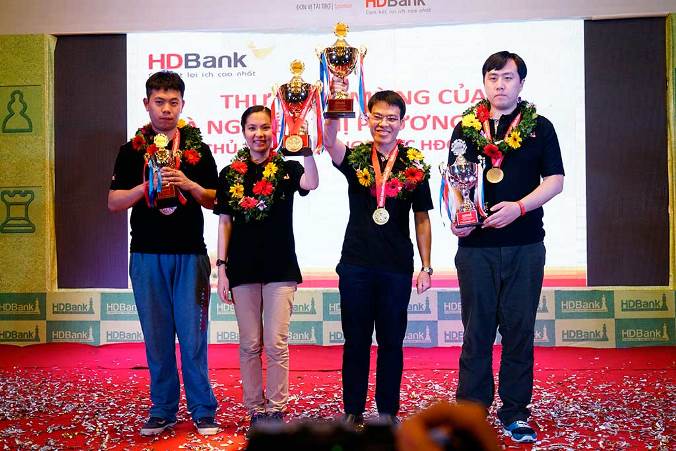 You can replay the games from the 2017 HDBank Masters by clicking on a result below, or hover over a player’s name to see their results:

Le Quang Liem had played in all but one of the six previous HDBank Masters tournaments held in Ho Chi Minh City, Vietnam, taking the title twice and never finishing more than half a point behind the winner. He didn’t falter in this edition either, winning 5 games and drawing 4 to take the $13,000 top prize. His draws included neutralising the dangerous Chinese challenge of Bu Xiangzhi, Wang Hao and Wei Yi.

Le Quang Liem and Wei Yi was the big showdown of the penultimate round, but despite both sacrificing a bishop they drew in 25 moves | photo: vietnamchess.vn

In the final round he had the black pieces against an opponent who played the “Swiss gambit” of starting with two losses and then beating a string of lower-rated opponents, culminating in former Women’s World Champion Antoaneta Stefanova: 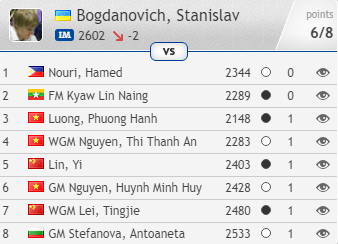 Midway through the round it even looked as though Bogdanovich might go all the way:

At the cost of a pawn White has built up an impressive position, with his knight threatening to wreak havoc on the queenside. Le Quang Liem here freed his bishop with 27…c4!, though, and the fightback was on. The 26-year-old Vietnamese grandmaster outplayed his opponent in the complications that followed and eventually took home the full point on move 79.

That was enough to claim clear first place after Ivan Cheparinov and Wang Hao repeated moves starting on move 24. Wei Yi vs. Bu Xiangzhi was drawn even sooner, on move 21, but it wasn’t without its drama. Wei Yi gave up a piece for two pawns and then regained the piece with 18.Qxe7. A decisive advantage?

No, appearances are deceptive and Bu Xiangzhi had correctly calculated that 18…Rf3! held a draw. After 19.Qxd8+ Rxd8 20.Re5 Rxh3, threatening mate on h1, Wei Yi played 21.Rh5 and offered a draw.

So the tournament ended with something of a whimper for Wei Yi, but he kept his rating more or less intact and played another of his attacking masterpieces! Jan Gustafsson takes us through Wei Yi’s beautiful crush of Xu Yinglun’s Sicilian in Round 7:

That left the final standings at the top looking as follows:

As you can see, it was an impressive performance to tie for 2nd by India's Vishnu Prasanna, who finished unbeaten, while Argentina's Sandro Mareco ended with three wins in a row after a tournament that started with a painful (but brilliant) loss to Singapore’s female IM Li Ruofan.

Let’s end with 19-year-old Tran Tuan Minh, who was the only player other than Wang Hao to have a 3/3 score when we last reported on the tournament. He then drew against Wang Hao and then lost a nice miniature to Bu Xiangzhi. The final move 19.Bh3+! was the icing on the cake:

The local player’s tournament might easily have fallen apart after that, but he won the next game, drew two 2600-rated players and then got to play his own brilliancy in the final game. Peter Michalik’s 25…g6?? was a big mistake in a tricky position:

Can you spot the killer blow?