Vladimir Kramnik retired from classical chess in January, but in the blitz opener of the Levitov Chess Week he showed he’s still not so rusty. He matched the 5/7 of Vishy Anand but took first place after winning their individual encounter. Alexander Grischuk, Peter Svidler, Ian Nepomniachtchi, Boris Gelfand, Anish Giri and Evgeny Bareev all finished below the former World Champions in the unusual closed event in Amsterdam. Peter Svidler is making highlight videos each day. 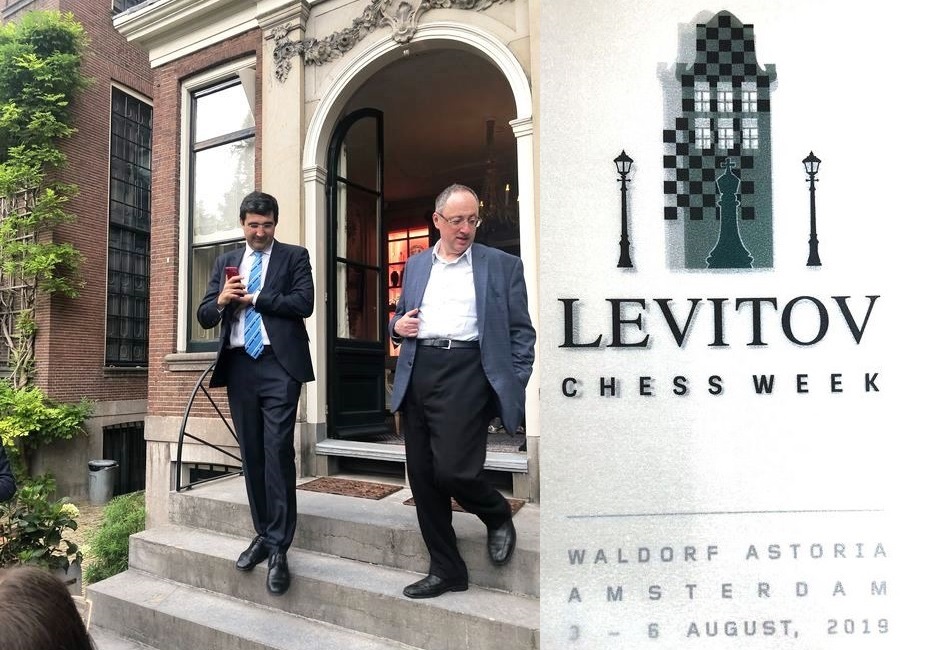 Vladimir Kramnik has no shortage of players in Amsterdam who can legitimately ask him why he retired so young, including Boris Gelfand | photos: Jan Gustafsson

If you’ve been following Anish Giri on social media – and why wouldn’t you?! – you might wonder where he was going in some impressive company after the Paris Grand Chess Tour:

Met some legends on the train to Amsterdam. 😎♟Discussing the comeback plans.🤭

It turns out it was to a private tournament in Amsterdam, where another World Champion would also be in attendance:

Speaking of legends. Here my crew with Vishy the King himself.♟👑 #iamonaboat #amsterdam #chess #legend #icon

Ian Nepomniachtchi and Alexander Grischuk also made the short trip from Paris to Amsterdam, while Peter Svidler had to cross the Atlantic after commentating on the Paris event from Saint Louis. Our very own Jan Gustafsson is also on location, or at least we think that’s what he’s been doing in Amsterdam…

The line-up, including veterans Boris Gelfand and Evgeny Bareev, is down to the organiser, Ilya Levitov, for whom the event is partly a 40th birthday celebration. Ilya was in charge of the Russian Chess Federation from 2010 to 2015, when he oversaw the Russian team captained by Bareev and, among other things, helped organise the 2012 Anand-Gelfand World Championship match in Moscow. 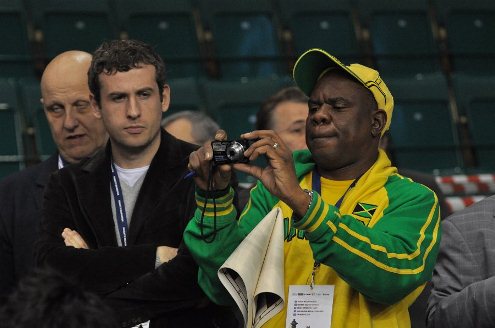 Levitov was always a fan of rapid and blitz, once commenting:

No-one’s planning to get rid of or replace classical chess. For me, classical chess is opera. It’s not something I love, but there are connoisseurs who really do like it. Men turn up in suits, and women in evening dresses. But let’s not forget about rock concerts when people arrive in ripped jeans, but fill up entire stadiums! We need chess rock, we need sport clubs and stadiums packed to overflowing! But Tal Memorials, beautiful classical tournaments with ten participants, won’t go away. 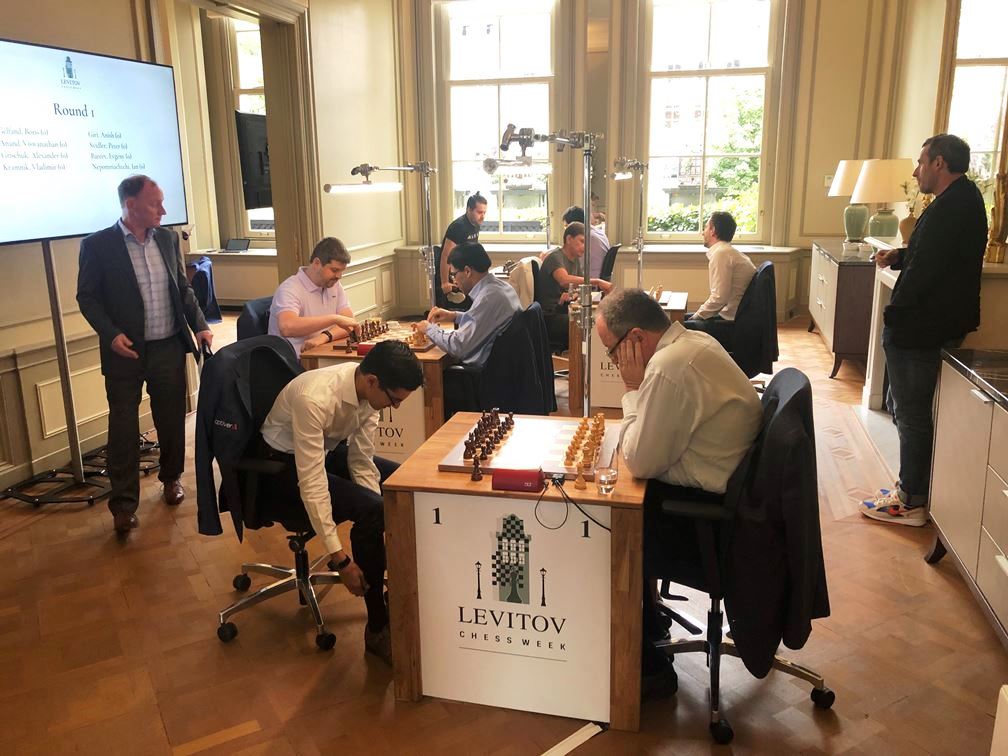 So for his birthday, of course, it was rapid and blitz on the menu, with the tournament in the 5-star Amsterdam Waldorf Astoria beginning with a 7-round 3+2 minute blitz tournament. The games aren’t being broadcast live on the internet, but you can watch them all after they’re over. Here's Saturday’s blitz:

Vladimir Kramnik got off to a slow start with a draw against Nepomniachtchi and a loss to Evgeny Bareev (now living in and representing Canada), but he began a run of 4 wins in 5 with victory over Peter Svidler. 29…h5? “wins a piece”, but it’s one of those things not to try at home:

It seems as though Black has everything under control, but the e8-rook is undefended, which Kramnik was able to exploit with 27.Bxe5! Qxe5 28.R7d5! Vishy gave up his queen with 28…Reb8, but Vladimir went on to grind out a win in 57 moves.

The final standings of the blitz looked as follows: 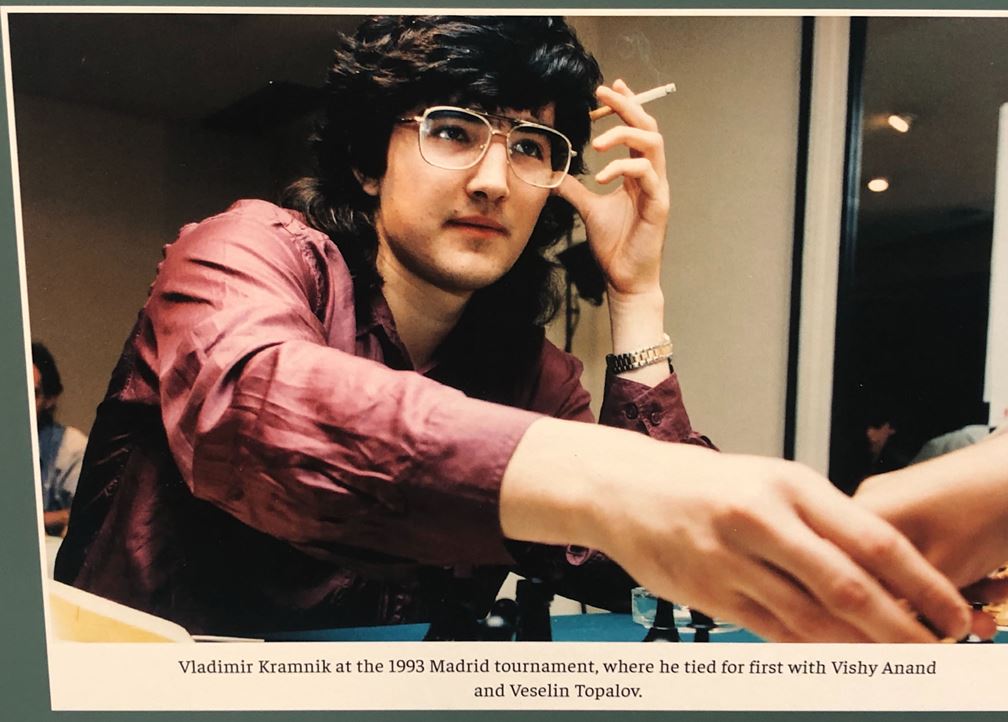 There's an exhibition of photos from the glory days of chess! | photo: Jan Gustafsson

That was mainly just the prelude to the 7-round 25+10 rapid tournament that will be played from Sunday to Tuesday. Sunday’s opening two rounds saw Kramnik get revenge against Bareev and draw against Giri to join Gelfand, Nepomniachtchi and Anand in the lead on 1.5/2. Best of all, Peter Svidler is making highlight videos of each day's action!

You can replay all the games below: 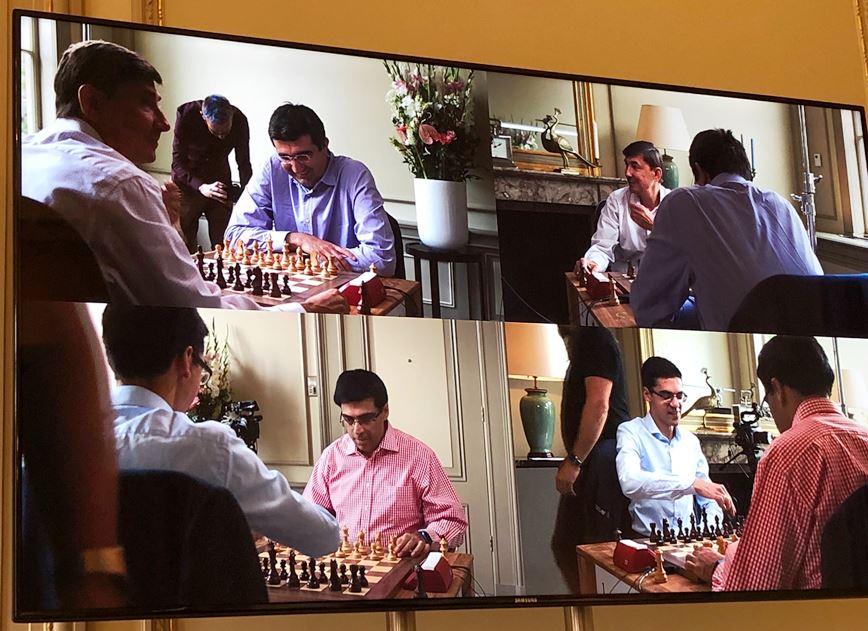 Kramnik would get his revenge for the blitz loss against his former captain Bareev, while Giri and Anand weren't only sharing boat trips | photo: Jan Gustafsson