Kramnik: "I just don't respect him as a person"

Vladimir Kramnik was interviewed on Norwegian television after taking the lead in the Norway Chess supertournament by defeating Fabiano Caruana. As Kramnik’s next game is against Veselin Topalov the conversation switched to the infamous “toiletgate” incident that marred the Kramnik-Topalov World Championship match back in 2006. Kramnik makes clear he hasn’t forgiven Topalov for the cheating accusations the Bulgarian leveled against him, and says he won't shake hands under any circumstances.

Vladimir Kramnik was interviewed by Cathrine Eide of TV2 after his Round 5 win against Caruana: 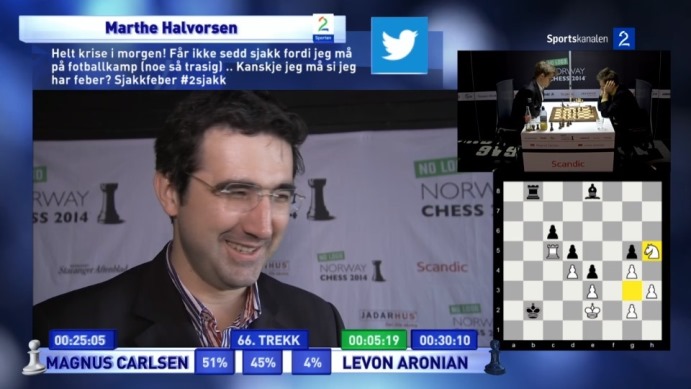 Cathrine Eide: You’re now leading the tournament. What are your thoughts about that?

Vladimir Kramnik: It’s still only half of the tournament and the lead is very small – just half a point – so I don’t really care so much about it. Of course winning a game against such a strong player as Fabiano is always nice, although I have to admit I was a bit lucky. I pressed the whole game, but he defended well and normally it should have been a draw. He probably just got tired by the end and made quite a serious blunder. So I had some luck today.

So you’re not happy?

No, I’m happy, but I’m usually happier to win because I play better not because I’m lucky. I’m also tired. It was a long, tough game. For the moment everything is going well but I’m not really thinking yet about winning the tournament. It’s a bit early to think about it.

Your next game is against Topalov. How do you feel about that?

Well, every game with Black here is not easy and of course he’s a dangerous player. Although he’s in last position now he can always strike and usually our games are very entertaining. I’m looking forward to a fight and we’ll see how it ends. In general, the main concern after this tough game today is just to recover well and to be fresh tomorrow.

With the toiletgate incident in mind how is your relationship with Topalov?

Not great, I have to admit (smiles). I don’t really see much potential of it getting better, but it’s ok, we can still play chess.

Do you want to make peace with him?

Will you shake his hand tomorrow?

I don’t think so.

Well, I just don’t respect him as a person. I respect him as a chess player very much but I think his behaviour there was really awful and totally unsporting and since he never apologised for it it’s a matter of principle. I’m not going to shake his hand.

How is it sitting across a chessboard for hours on end with a man you don’t respect?

It’s ok (smiles), it’s business – nothing personal. In many areas you have to deal with people who you don’t respect. Of course he’s a strong opponent, so I don’t care. I just play a game against him and when I play chess anyway it’s never personal for me. Once it starts it’s just a game of chess so for me it doesn’t matter if I play against a friend or against somebody I don’t like. It’s the same for me.

If it’s not personal, why won’t you shake his hand?

It has nothing to do with chess. I’m not shaking his hand in any situation – not even when I play chess. For me chess and, let’s say, human life, are separated very clearly, so it has absolutely nothing to do with chess. It’s simply I’m not shaking his hand because I wouldn’t do it under any circumstances. It’s a story which is already old and I’m not emotional about it. I just don’t want to deal with him, that’s it – on no human basis. But there’s no problem for me playing chess with him.

The other players have of course also been facing the general media’s questions in Norway. Alexander Grischuk provoked laughter by focusing on the weather when he was also interviewed by TV2 after his draw against Simen Agdestein: 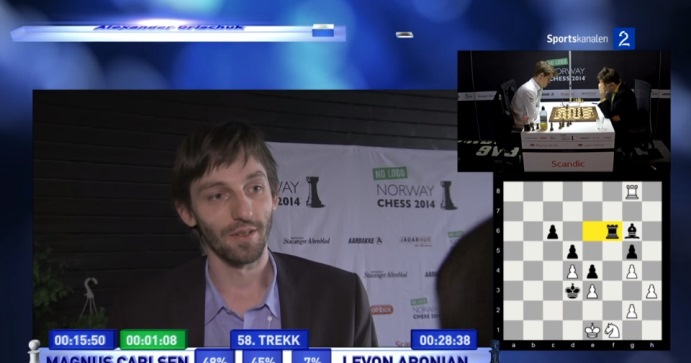 Alexander Grischuk: Today I was again about to lose, but I got lucky at the end and survived.

How do you feel about a draw?

Basically I try to win every game, but I usually come closer to losing.

But you’ve done quite well in this competition. How do you feel about that?

So what is good for you in this tournament?

So the weather is the most important thing?

No, I mean it’s probably the best thing for me here.