Kramnik and Topalov bury the hatchet

It has been one of the most notorious rivalries in chess. Ever since their 2006 match in Elista, Vladimir Kramnik and Veselin Topalov have been avoiding each other like the plague, not speaking, and ignoring the customary handshake before and after a game when they have been forced to face one another at the board.

In 2009, Kramnik's comment epitomized the animosity during the famed Amber Blindfold and Rapid tournament:

"I believe he did terrible things in Elista and he is still telling awful things, so OK, as long as he continues, I mean, for me he doesn't exist as a human being…", Kramnik said, in reference to unsubstantiated allegations by Topalov's associates that Kramnik received computer assistance during their match.

In the intervening years they have played very few games, so naturally there was heightened interest in both of their encounters during the recently concluded Candidates Tournament in Khanty-Mansiysk. Would they finally "bury the hatchet" and speak as civilized grown-ups? Would they at least shake hands, as prescribed by FIDE guidelines?

The answer, as reported by chess media on the scene was, lamentably, nyet. No handshake. 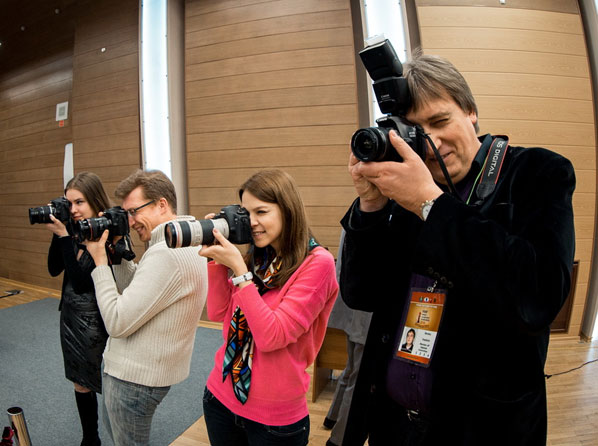 Members of the chess media wait in anticipation for the arrival of Topalov and Kramnik before Round 13. (L to R: Eteri Kublashvili, Evgeny Atarov, Anastasia Karlovich, Vladimir Barsky) | photo: Kirill Merkuriev

In their head-to-head encounters, it was no holds barred: Topalov won their duel in Round 6, while Kramnik took the rematch. 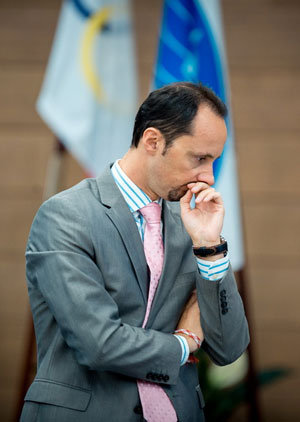 But the psychological toll clearly weighed on Topalov, in particular, who finished in last place. Throughout the tournament, he appeared pensive like a man wallowing in a trough of self-pity.

According to Radio Bulgaria, it was Veselin's wife Christina, who first suggested that the mutual animosity was like a thorn in the side of the former World Championship contender.

The pair met initially around the time of the Elista match, introduced by Topalov's manager Silvio Danailov, but after they were married in 2010, she reportedly began to quietly lobby for her husband to take the high road in the ongoing dispute.

Topalov, however, refrained from taking his wife's advice, and after a crisis of motivation following his failed World Championship bid, he climbed his way back toward the top of the world rankings, winning the Grand Prix to qualify for the Candidates.

Danailov, the current President of the European Chess Union, despite relishing Topalov's victory in the first half, also realized — pragmatic politician that he is — that sometimes you have to let bygones be bygones, or as they say in Bulgarian, "Каквото било - било".

From now on, we do shake hands. No tricks. It's time to look forward, you know, toward the future. Gens Una Sumus, and so on.

The ice was finally cracked, though not fully broken, when Kramnik confessed that his wife Marie, has also urged him to "offrir un brin d'olivier", as a lesson in gallantry for their now 14-month-old son Vadim. 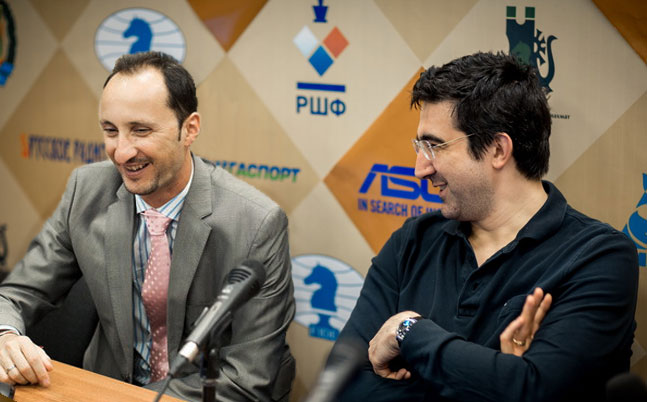 Topalov and Kramnik share a laugh after finally deciding their eight year long feud was "just getting a bit old". | Photo[s]: Kirill Merkuriev

Although the two formidable grandmasters have yet to shake hands, either at or away from the board, this brief moment of levity indicated that the controversy may yet subside, potentially mending a rift in the chess world, and healing a wound that has festered too long.