Kovalenko dominates in Oslo… without a laptop!

Igor Kovalenko scored a brilliant 8.5/9 to win the inaugural Oslo Chess Festival by a full 1.5 points ahead of Boris Chatalbashev and young stars WGM Zhansaya Abdumalik and GM Aryan Tari. Iranian IM Dorsa Derakhshani also competed and shares her impressions of the tournament, including conversations with the winner, Aryan Tari and Alexander Moiseenko, and a visit by well-known local resident Magnus Carlsen. 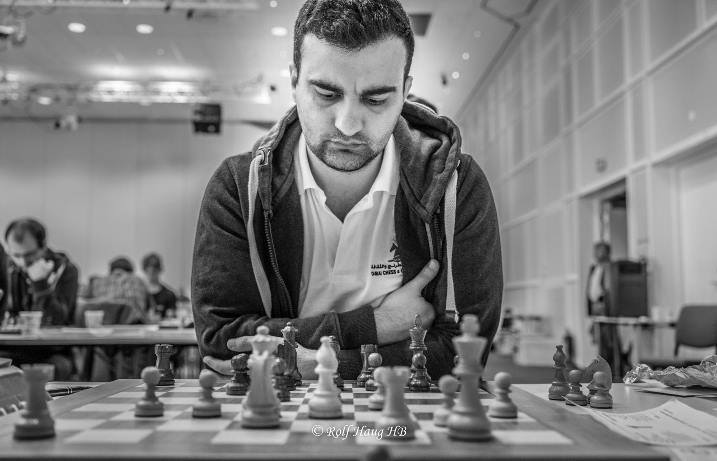 Igor Kovalenko on the way to an almost perfect 8.5/9 | photo: Rolf Haug

The Oslo Chess Festival took place from the 30th September to the 6th October in the Scandic Hotel Fornebu. Although the tournament clashed with Millionaire Chess and the Isle of Man International, the 120,000 Norwegian Krone prize fund attracted a strong field, including established stars such as Igor Kovalenko and Alexander Moiseenko and up-and-coming juniors like Zhansaya Abdumalik and Aryan Tari.

You can replay all the top games using the selector below (hover over a player’s name to see all their results):

Top seed Igor Kovalenko won a well-deserved victory with 8.5/9, finishing one and half points above the runners-up (see full results here): 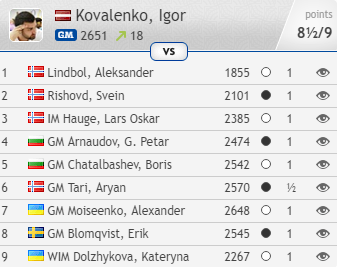 Igor said he was looking for a warm-up tournament in this period, saw there were some top players and thought it was a good opportunity to do some unusual training:

I really liked it in Oslo and my friends and I could walk around the city... Given that I came to the tournament without a laptop, I didn’t prepare for the games. I was walking, reading, listening to music, watching YouTube and thinking about life. Every year I choose one or two tournaments where I go without a laptop and only with a tablet.

Igor’s only draw came against 17-year-old Norwegian Aryan Tari, who annotated the encounter that won the best game prize in Round 6 (click on the "moves" tab below): 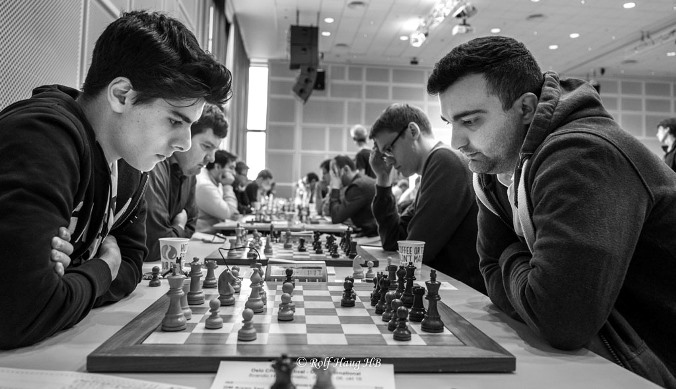 Aryan Tari was the only player to escape with a half point against Kovalenko | photo: Rolf Haug

After that game Tari became the only player in the top five to take a half-point bye, commenting:

I took one rest because I thought that two double rounds would be too much, and I decided after my game against Kovalenko to just sleep a bit longer the next day!

I think it depends on your mood... If you feel like resting for a round, I don't see why that’s negative.

The Oslo Chess Festival is an additional boost to the development of chess in Norway, and there’s also a special option for young Norwegian chess players – chess school instead of a regular high school! Aryan explained:

I go to a sports school (NTG) about 15 minutes from Oslo in a city called Baerum. This school is made for people who want to combine their sport and school, and luckily they have chess there as well. Basically everyone who wants can go there and you don't need to have a good rating or something, but usually you have to have grade 4 on a scale up to 6 to be accepted – they might not allow you to join if you're really bad at school. Chess became one of the sports in this school about 20 years ago, and most of the people who go there are satisfied. The point is that you can travel as much as you want, as long as you manage to take your tests and get assessed in the subjects. This year there are about 12 of us, including five girls! We have chess from Monday-Thursday, 2.5 hours every day.

There is no doubt that chess in Norway is developing because of Magnus Carlsen. Since 2013, when Magnus played the match vs. Anand, many people have shown an interest in chess and almost all of the tournaments Magnus plays in are broadcast on television.

Magnus himself dropped by the tournament during Round 6: 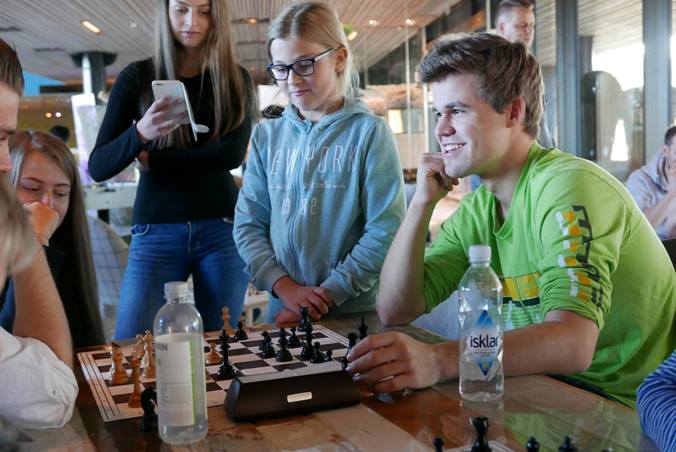 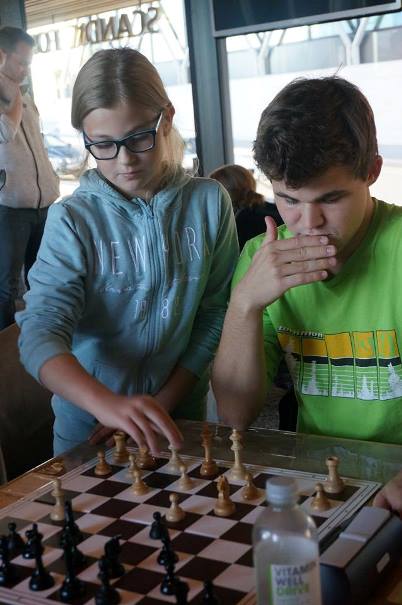 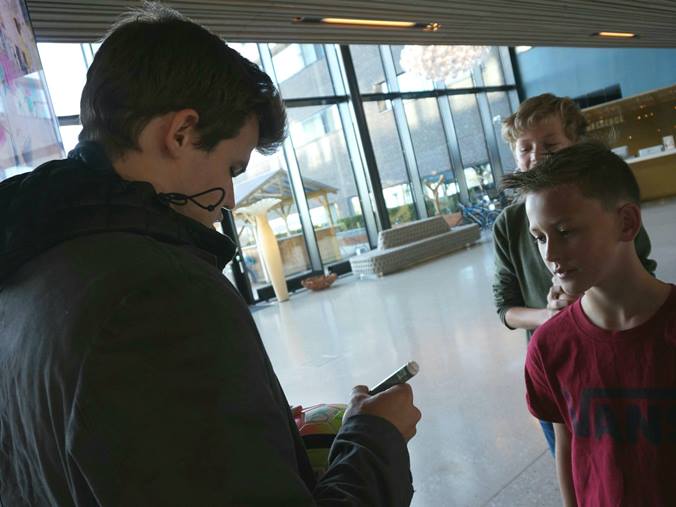 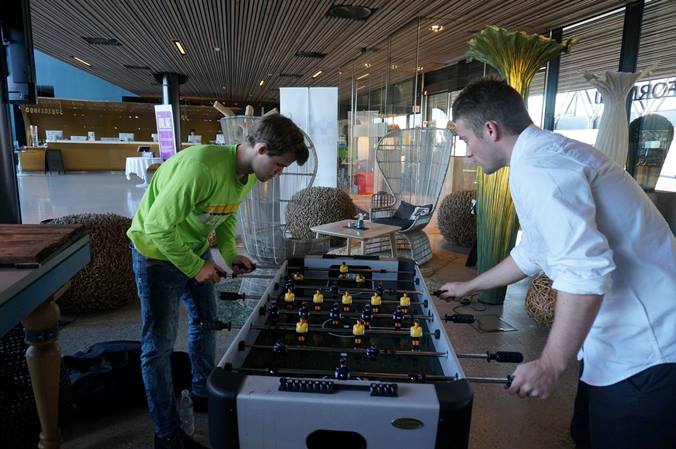 The player expected to be Kovalenko’s biggest rival was Ukraine’s Alexander Moiseenko, who explained why he chose to play in Oslo:

For my country it’s not so easy to get a visa for the Isle of Man and personally I preferred to play in Norway, because I was born not so far from the Russia-Norway border. It was my first time in Oslo, but I’ve played a lot in Norway before. The best result was in 2007, when I won the Arctic Open in Tromsø, half a point ahead of Magnus Carlsen.

Alexander’s tournament turned on one game:

The game with Kovalenko was critical. I had a good position and was playing for a win, but suddenly I made several wrong moves and lost very quickly. Igor played very well – he’s a deserving champion of the tournament!

After Kovalenko’s 27.g4 Moiseenko could have broken in the centre with 27…e5!, when after 28.dxe5 Nc5! the knight is suddenly very powerful. Instead after 27…a6 Igor was able to take control, play the d5-break himself and soon achieve total domination. The final position after 40.Ng4:

Moiseenko also talked to Tarjei J. Svensen, among other things giving his verdict on the upcoming Carlsen-Karjakin match:

There were other stars in action, including Zhansaya Abdumalik. The 16-year-old from Kazakhstan has been tipped as a future Women’s World Champion after winning the U8 and U12 World Girls Championships and winning a silver medal in the U20 tournament as far back as in 2013. She had a great result in Norway, finishing in third place on 7/9 and picking up 24 rating points.

She was interviewed after the event, and mentioned she already has a chess school that teaches 600 students:

He has a curious story, since as recently as September he was rated 2230, but lost 300 points in one rating period. I knew that when I played him in Round 3, and was very happy to score a win which took the Game of the Day prize:

Apart from main event there were plenty of side events to enhance the experience for participants, including a rapid tournament on the morning of the second round and master classes with some of the players (including Aryan Tari).

The Scandic Hotel Fornebu where the tournament was played 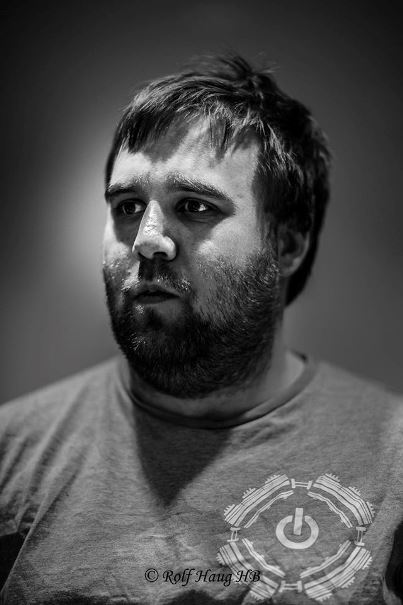 Øyvind Malin was the man working behind the scenes to make sure the tournament could be seen live around the world | photo: Rolf Haug

The venue and hotel were hard to improve, and even the weather played its part – despite the expectations of a cold, windy experience in October it was actually still quite nice and sunny. The players were happy, and the good news is that organiser Pal Nordquelle has ambitious plans for the event, as he shared in an interview with Tarjei J Svensen:

Let's hope the Oslo Chess Festival can take its place as another major chess event in Norway! 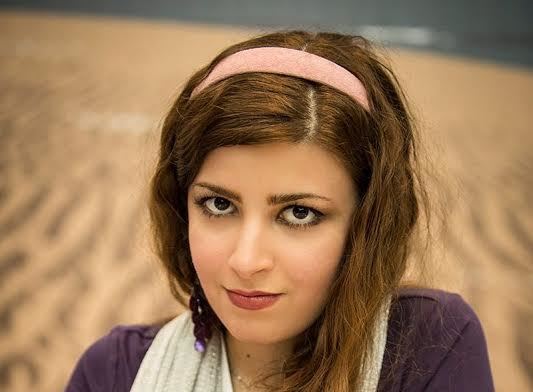