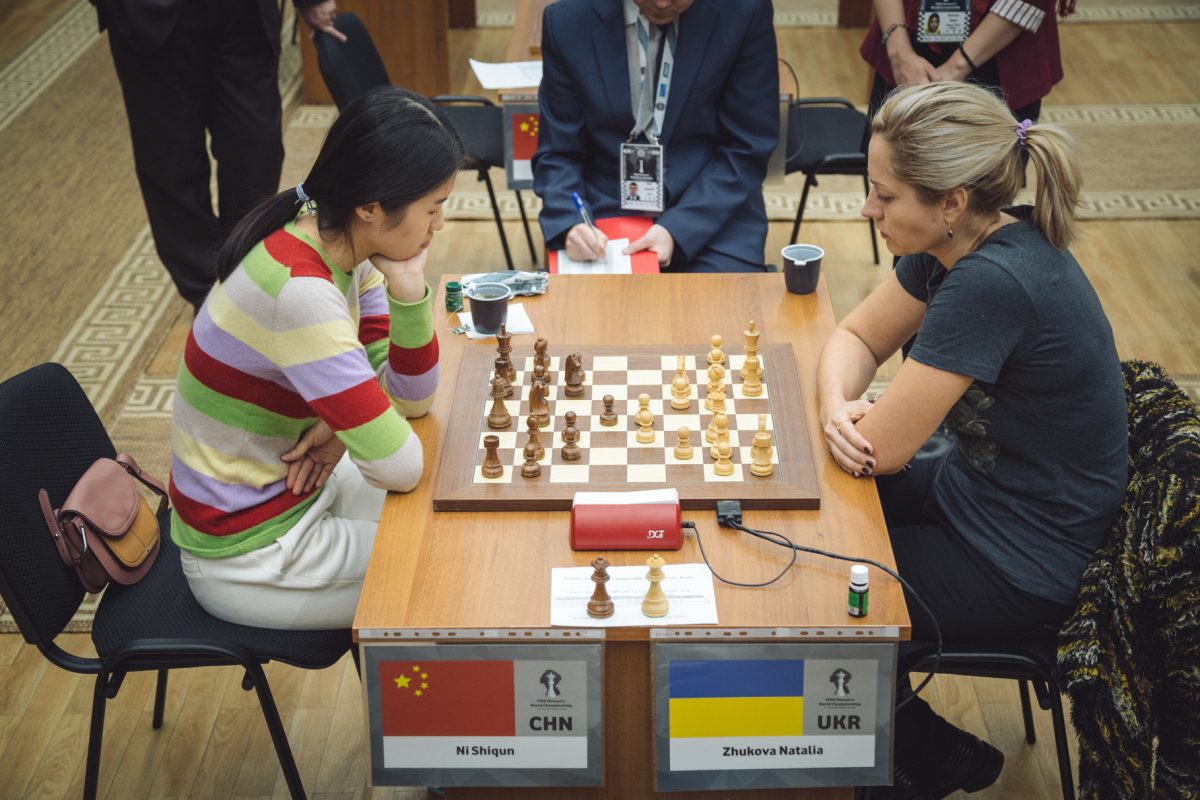 Ni Shiqun-Zhukova featured the only comeback win and was the only match to go as far as 10+10 tiebreak games, with the 21-year-old Chinese player eventually coming out on top | photo: official website

You can replay all the games from the Women’s World Championship using the selector below:

The most remarkable woman in the Women’s World Championship in Khanty-Mansiysk is arguably 74-year-old Rani Hamid, who started to play at the age of 34 and is a 19-time Bangladeshi Women’s Champion and 3-time British Women’s Champion. Although her rating is down at 1935 from a peak of 2189, the Women’s International Master is the reigning national champion and qualified on merit by winning a zonal tournament with 8/9. 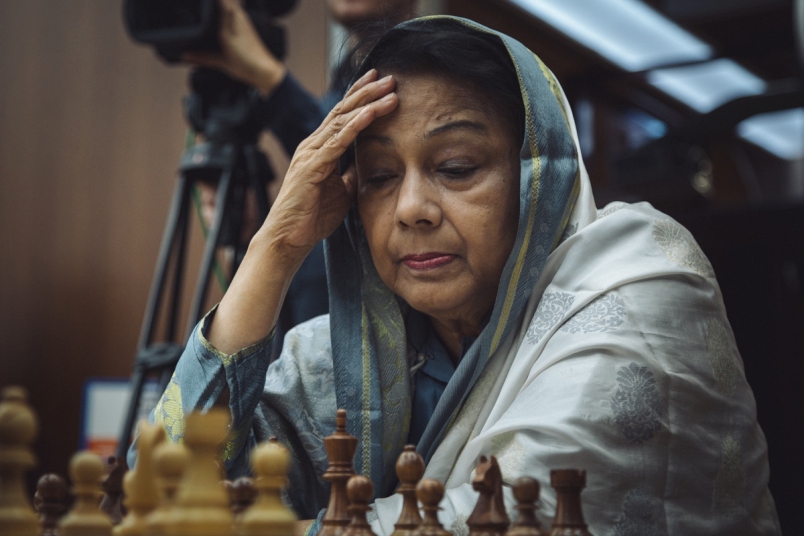 Rani Hamid has shown you can still achieve great things if you start very late in chess | photo: official website

It was all about youth in Khanty-Mansiysk, however, and 4th seed Anna Muzychuk made quick work of the match, already seizing a winning advantage with 17.c5!, when Black has no time to capture the pawn:

The second game was even more brutal, and Anna was the first player into Round 2 of the event. Her 2:0 scoreline was matched by another 10 players, including her sister Mariya and top seed Ju Wenjun. Two of those wins were upsets, however, with China’s 15-year-old Zhu Jiner fearlessly grabbing material as she went on to smoothly outplay Georgian 19th seed Lela Javakhishvili. 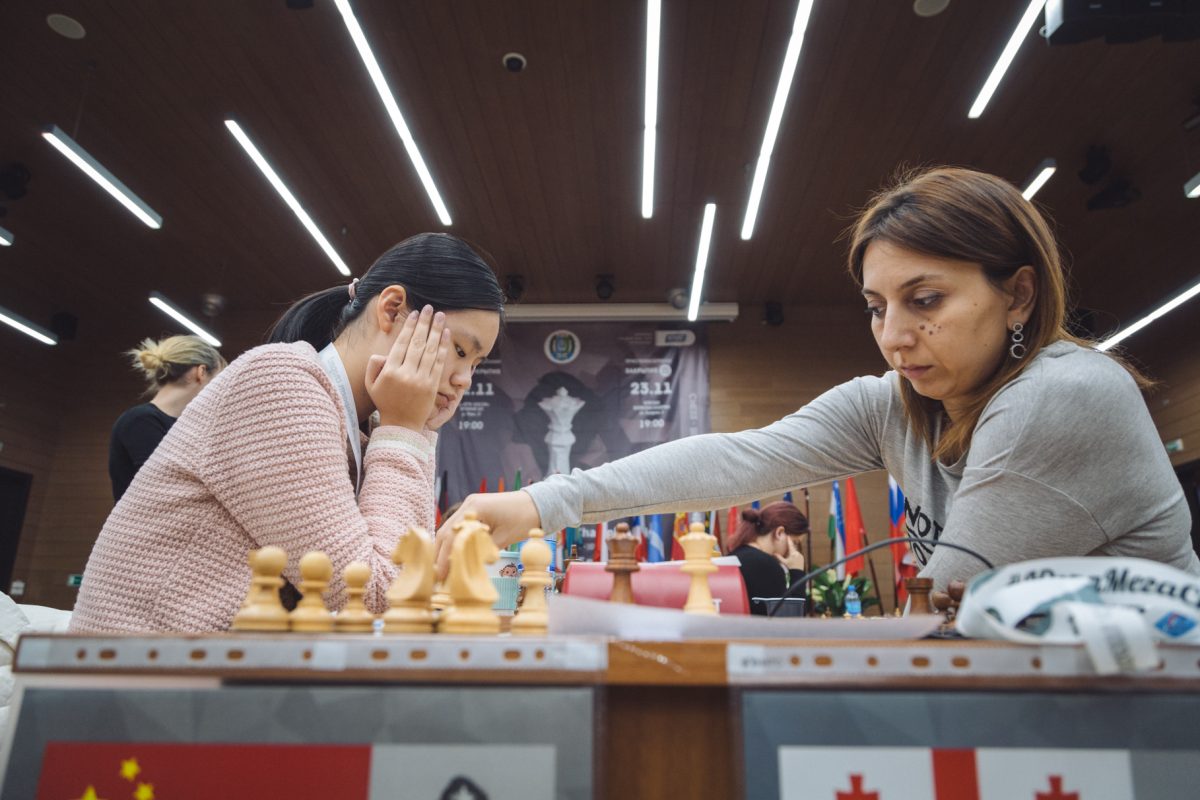 The 2:0 loss of Russia’s Olga Girya was much more dramatic. In the first game she played the Caro-Kann against Chinese Champion Zhai Mo and had an advantage in a position with opposite-side castling, but a couple of inaccuracies and suddenly it was White who had an unstoppable attack. 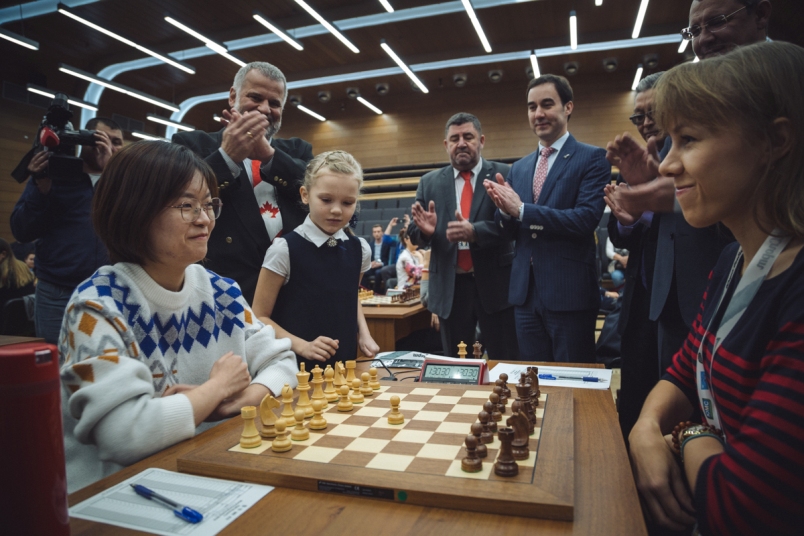 In the second game Olga got nothing against her opponent’s Grünfeld Defence, but just when it seemed her World Championship was going to end with a whimper, she instead fell to a truly beautiful move, played in mutual time trouble:

There are two threats, back-rank mate with Re1#, and Bxd4+, forking the rook and king. It seems for a moment White should be able to defend against both those issues with 39.Nf3 or 39.Nc2, but then 39…Bd4+! comes anyway, and the bishop can’t be taken without allowing the back-rank mate. A perfect example of what we mean by chess geometry.

Many players seemed to suffer from time trouble in the first round in Khanty-Mansiysk, with it proving fatal for two star names:

German no. 1 and 10th seed Elisabeth Paehtz would have had excellent winning chances here in the first game against Mobina Alinasab if she’d played 28.e6!, but instead 28.Nf5, played with 2 minutes on her clock, gave away the advantage, and after 28…Bf8 with one minute remaining she played 29.a4?!. Then after 29…Nc6! with just 6 seconds left she went for 30.f4?!, when 30…Qe6! secured a big and stable advantage for Black. 18-year-old Mobina is the reigning Iranian Champion and went on to win a tricky rook ending (at times it was objectively drawn) before drawing from a position of strength in the following game. 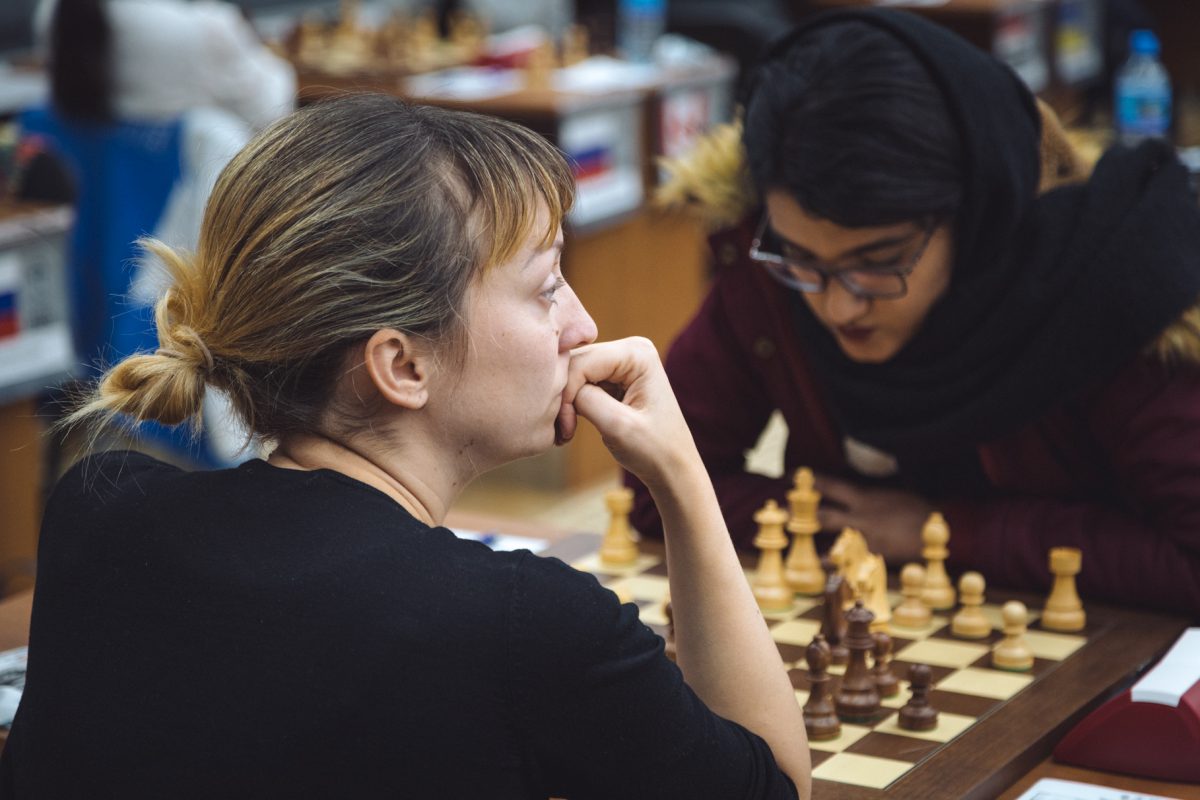 There was a similar hard-luck story for Russia’s Alina Kashlinskaya, who couldn’t maintain the momentum from her Isle of Man success. Here her 19-year-old Uzbek opponent Gulrukhbegim Tokhirjonova had just 9 seconds on the clock when she played 38.h5?!

A day later Alina was unable to get the win she needed to stay in the tournament.

Ten matches saw two draws in the classical games before, remarkably, all ten of them were decided in the first two 25-minute + 10-second increment tiebreak games. The favourites all won, but not without some drama along the way! 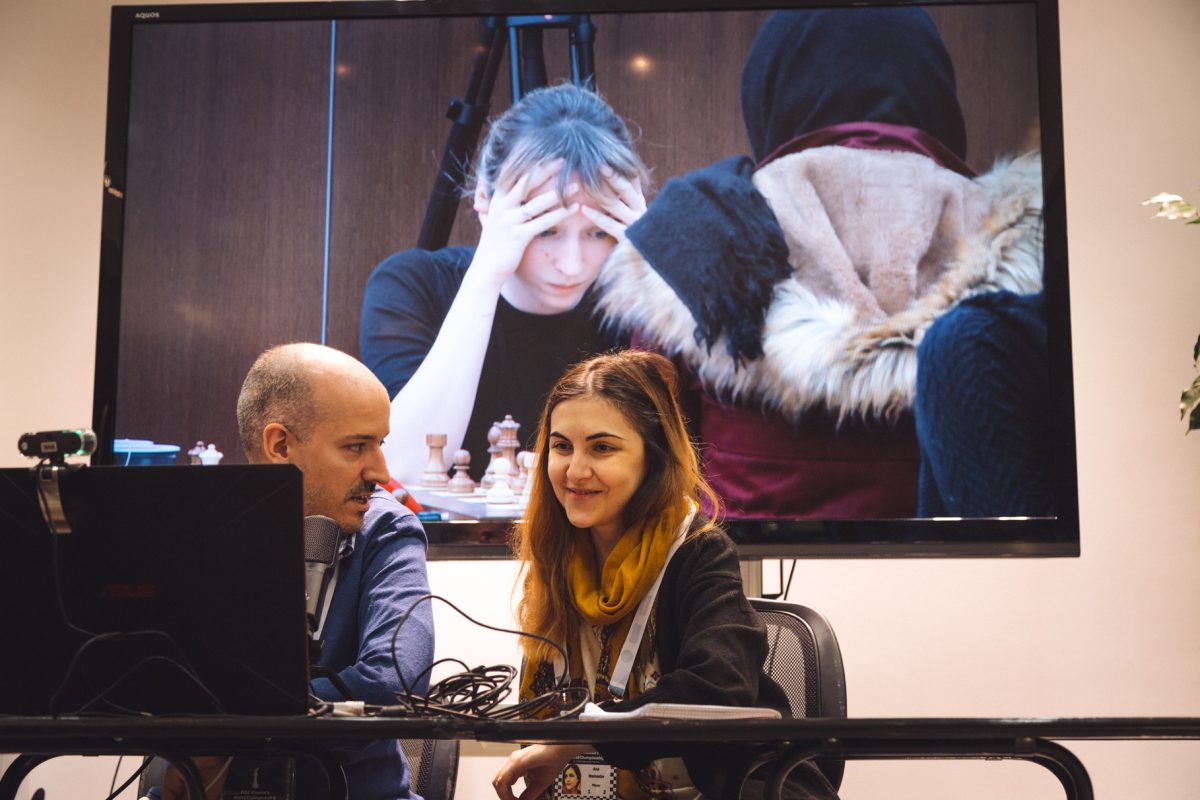 Spain's Ana Matnadze missed a win in the first classical game before finally losing 2:0 to Kazakhstan's Dinara Saduakassova in tiebreaks. David Martinez, who coaches the Spanish women's team and runs chess24 in Spanish, is heading home as well after there were no upsets and all the Spanish and Latin American players lost in Round 1 | photo: official website

27-year-old Guliskhan Nakhbayeva from Kazakhstan had a winning attack against 3-time Russian Champion Alisa Galliamova, who has just played 34…Bg6:

There was also a remarkably close escape for Indian 12th seed and 2017 semi-finalist Harika Dronavalli:

It’s all the more painful for Georgia’s Sopiko Khukhashvili that after missing the win by playing 64.Bb7 (with 10 seconds on her clock) she could have taken an easy draw by playing Bxd5 on either of the next two moves. 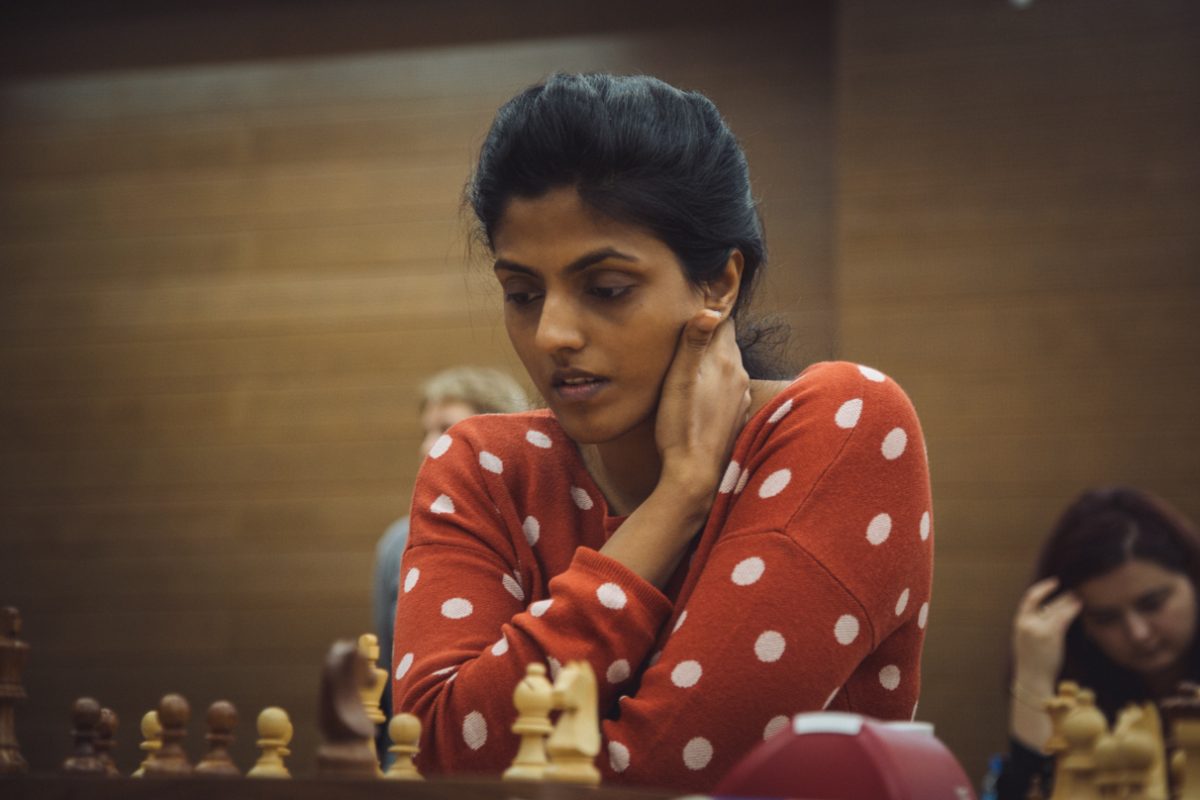 One match stood out, however: 2-time European Champion from Ukraine Natalia Zhukova’s clash with 21-year-old Ni Shiqun from China. The first game turned in Natalia’s favour when, as she pointed out afterwards, Ni Shiqun’s 24.Nc5 proved to be flawed after 24…Bc8!

Natalia said she could see her opponent’s disappointment as she realised that the intended 25.Bxb7? (25…Bxb7?? 26. Ne6+!) fails to 25…Nf5! and Black would be winning. Instead Shiqun retreated her knight to b3 and neither player really put a foot wrong until move 52, when in going for a little combination the Chinese player had missed a deadly zwischenzug:

One year ago in Tehran Ni Shiqun was a surprise package, going on to score upset wins over Lilit Mkrtchian, Valentina Gunina and Natalia Pogonina before finally losing to Alexandra Kosteniuk in the quarterfinals. 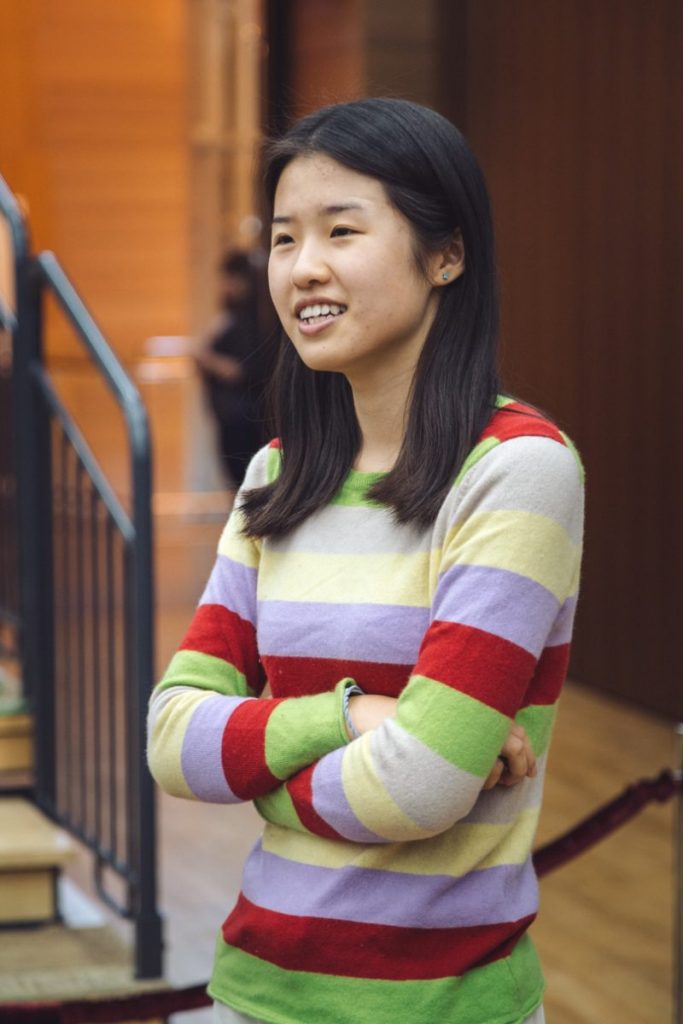 Ni Shiqun needed six games, but she made it through to Round 2 | photo: official website

This time round she was the ratings favourite to win in the first round and she lived up to that billing by winning a complicated game on Day 2 to become the only player of the 19 needing to win on demand to actually get the win to force tiebreaks. The tiebreak itself was then the only one to go to 10+10 games, after the two 25+10 games were drawn. A win in the first 10-minute game was all it took for Ni Shiqun to qualify for a chance of revenge against Kosteniuk!


We didn’t even come close to Armageddon…

The full pairings for Round 2 are packed with encounters that are simply too close to call:

Don’t miss the action live, with Alexander Morozevich now joining Pavel Tregubov in the English commentary from 11:00 CET onwards each day for the next month here on chess24!