2nd seed Humpy Koneru, 6th seed Aleksandra Goryachkina and 8th seed Tan Zhongyi were among the top players to be knocked out in Round 2 of the Women’s World Championship in Khanty-Mansiysk. Only three of the eight matches in Round 3 feature the expected names, with young stars such as 18-year-old Mobina Alinasab from Iran continuing their giant-killing runs. It was the end of the line for 15-year-old Zhu Jiner, however, as she lost the longest match of the round to Natalia Pogonina. 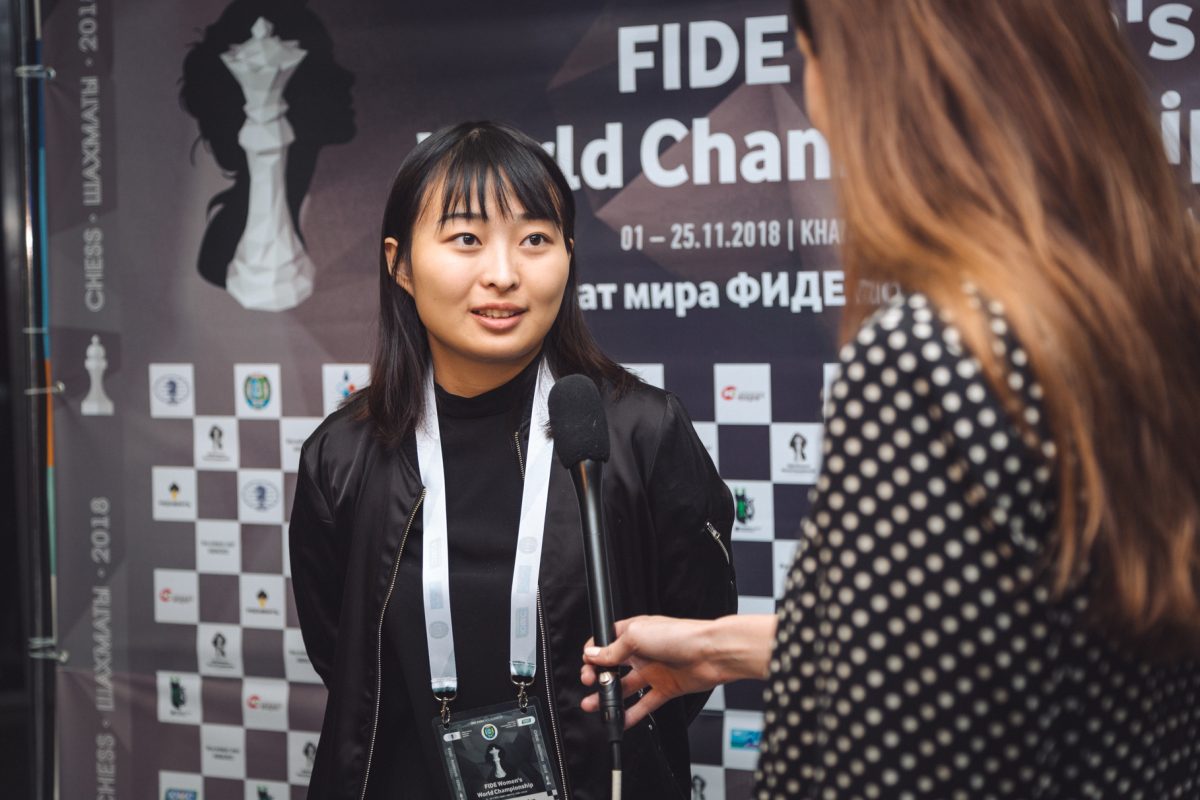 Women's World Champion Ju Wenjun made it through to Round 3 (here she's being interviewed by Eteri Kublashvili), but many of her colleagues failed to make it | photo: official website

You can replay all the games from the 2018 Women’s Knockout World Championship using the selector below:

Once again in Round 2 the action was over earlier than we’re used to in big chess knockout tournaments. 8 of the 16 matches went to tiebreaks, but only one extended beyond the first two rapid games. As in Round 1 that match ended in the following 10+10 games, with no need for blitz or Armageddon. 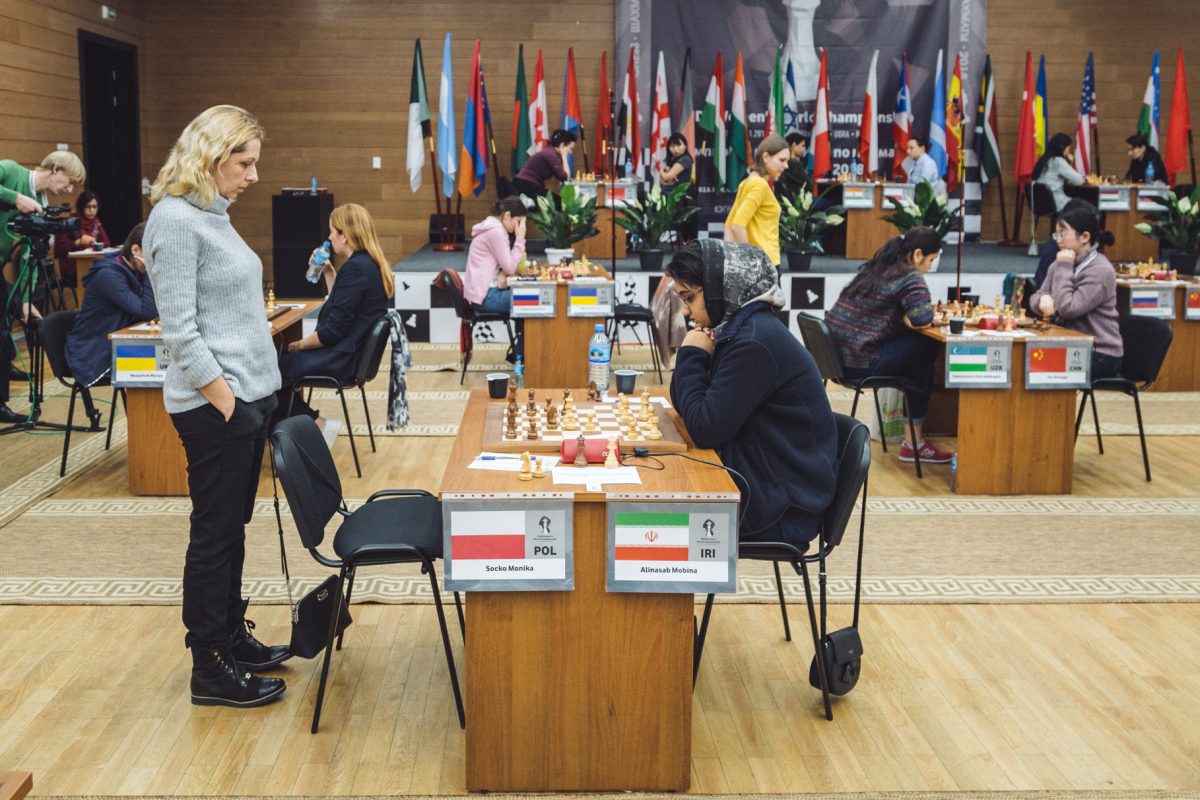 The heroes of Round 1 of the Women’s World Championship in many cases turned into the heroes in Round 2 as well. 18-year-old Iranian Champion and 55th seed Mobina Alinasab knocked out Elisabeth Paehtz 1.5:0.5 in Round 1 and then scored an even more comprehensive 2:0 victory over Monika Socko in Round 2.

Current 22-year-old Chinese Champion and 48th seed Zhai Mo (2352) beat 17th seed Olga Girya 2:0 in the first round and then repeated that feat to knock out 16th seed Nino Batsiashvili 2:0 in Round 2. 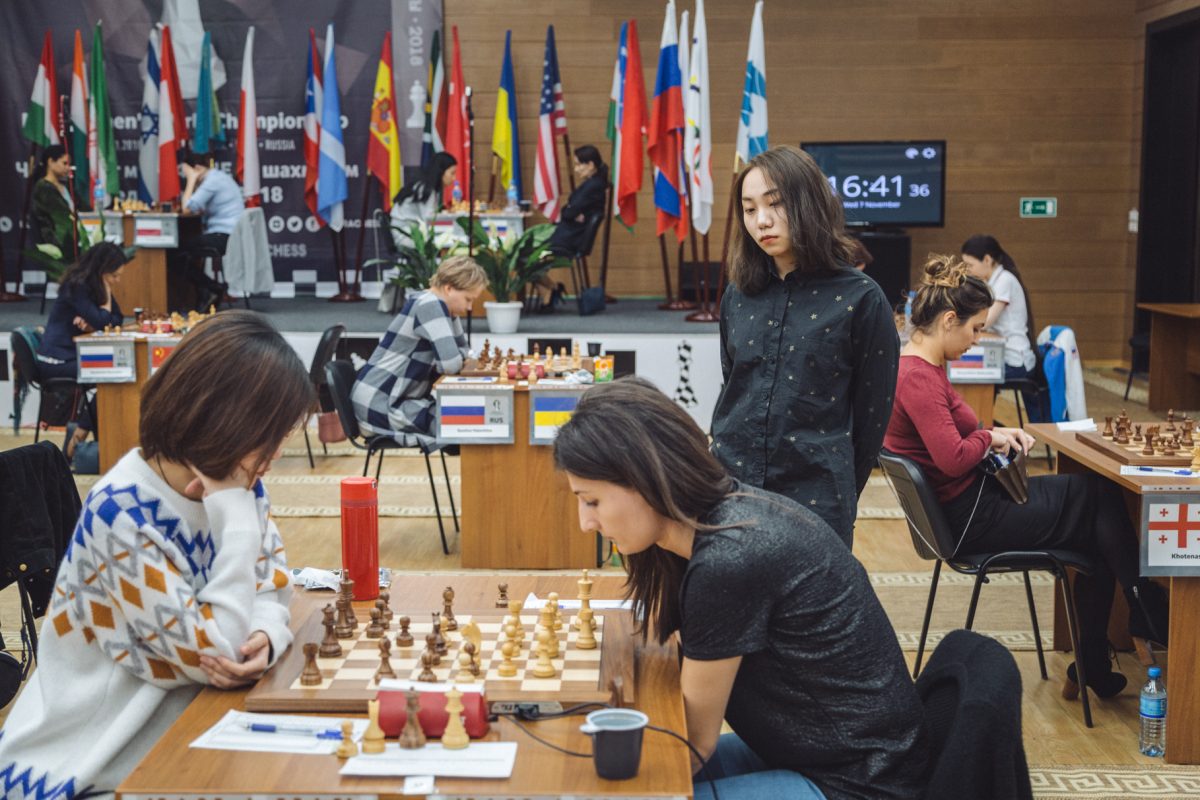 Zhai Mo now has 4 wins in a row against much higher-rated opposition | photo: official website

Once again she got to demonstrate a fine eye for tactics!

21…Bxc4! 22.Rxc4 Qxg3!! 23.hxg3 Bxe3+ and Black emerged with a winning advantage. Her reward, a match-up against her compatriot, top seed and Women’s World Champion Ju Wenjun in Round 3. 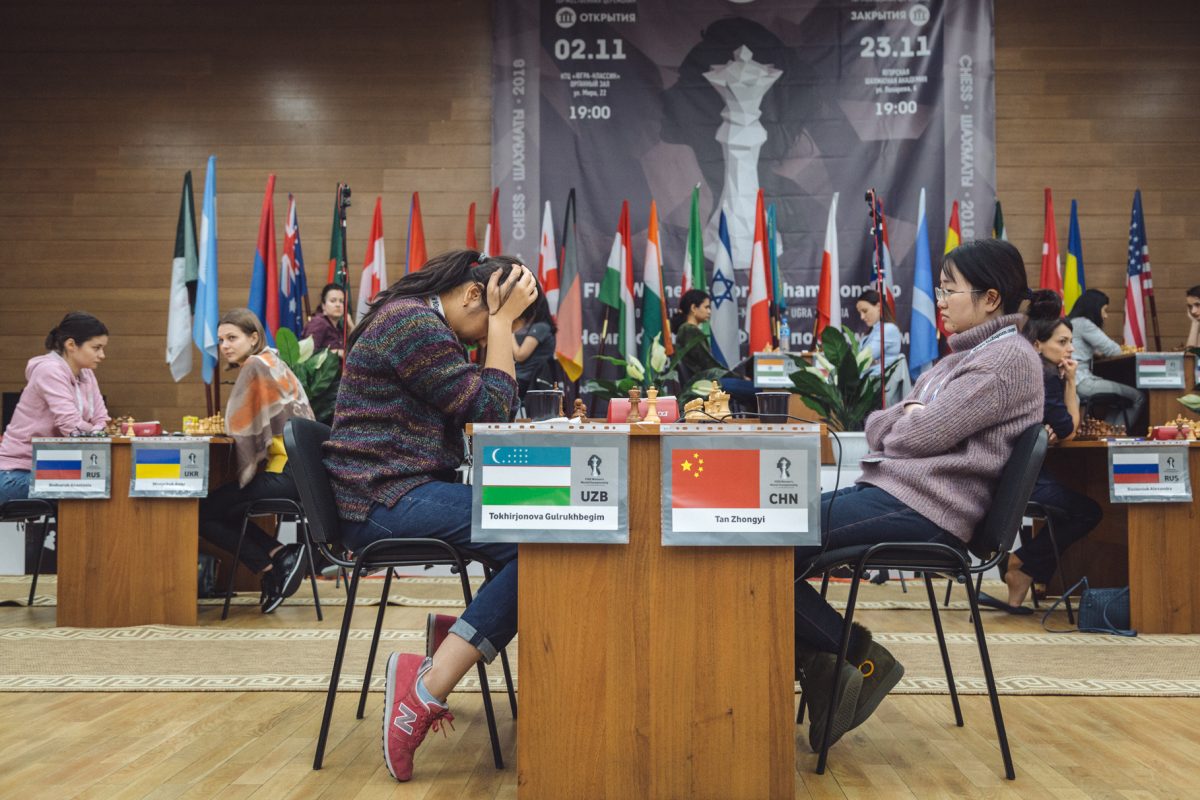 We may at some point have to learn to spell the name Gulrukhbegim Tokhirjonova! | photo: official website

19-year-old Gulrukhbegim Tokhirjonova from Uzbekistan is seeded 40th but followed knocking out Alina Kashlinskaya in the first round by taking the scalp of the 8th seed and winner of the last knockout World Championship Tan Zhongyi. That match went to rapid tiebreaks, where the Uzbek player won the first game.

21-year-old Lei Tingjie from China is too established a name to consider her victory over Nana Dzagnidze a big upset, but the 1.5:0.5 win was still a case of the 22nd seed eliminating the 11th seed. 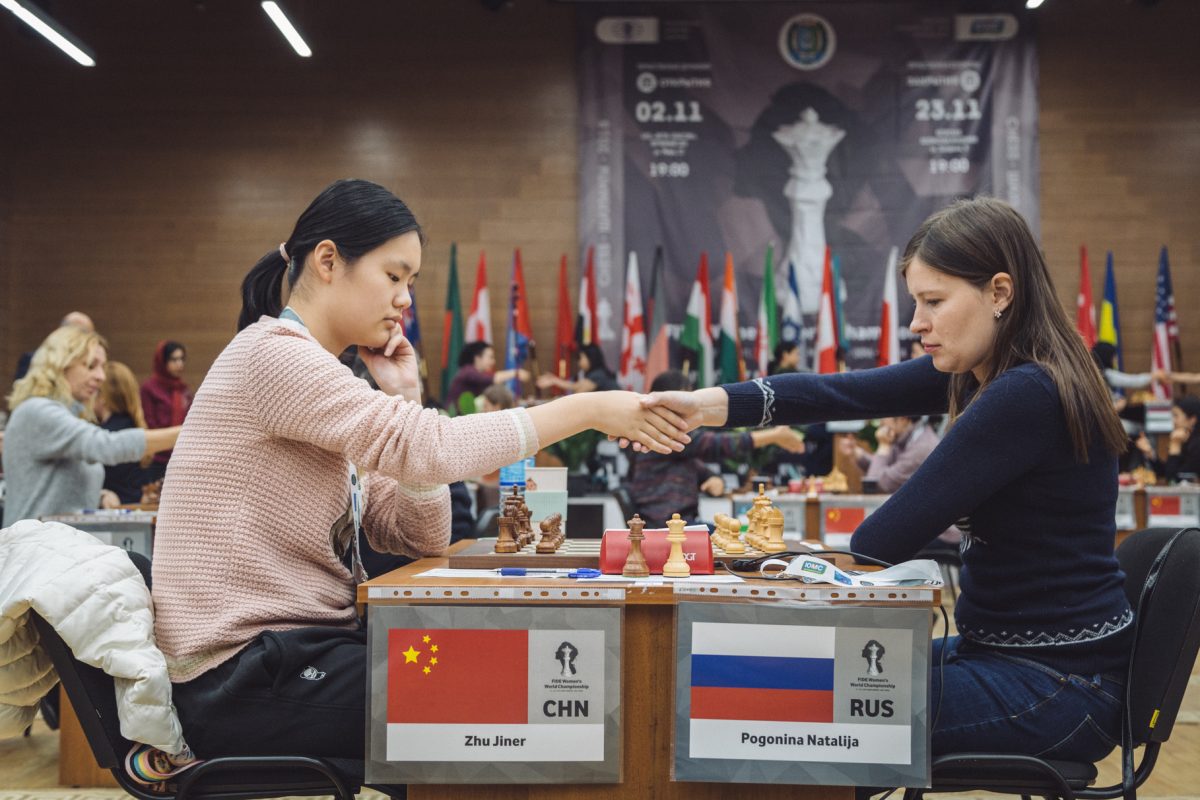 Zhu Jiner fell just short in Round 2, but this 15-year-old looks like another Chinese star in the making | photo: official website

The youngest player in the field, 15-year-old 46th seed Zhu Jiner from China, was also on the brink of following up her 2:0 upset win over Lela Javakhishvili by beating Natalia Pogonina. The victory in the first classical game couldn’t have been more convincing:

In the second the youngster seemed to have everything under control with Black, but 22…Be5? was unexpectedly the losing mistake:

After 23.Bxe5! Qxe5 24.Rad1! it turns out there’s nothing Black can do long-term to avoid losing material due to the pin down the d-file. Zhu Jiner was then better in the two 25+10 tiebreaks that followed (her bold approach included starting with the Evans Gambit), but missed wins and ended up losing 2:0 in the 10+10 games. The final move of Round 2 of the Women’s World Championship was a nice one:

48…Qxd2! and Zhu Jiner resigned, since a knight fork on f1 would win the white queen.

It wasn’t only about youngsters, as 31-year-old Polish Champion Jolanta Zawadzka won a complicated encounter with Black in the second classical game to ensure that Indian 2nd seed Humpy Koneru’s return to chess this year wouldn’t have a fairy tale ending.

35-year-old Ekaterina Atalik, born in Russia and now representing Turkey, was on the verge of knocking out former Women’s World Champion Mariya Muzychuk. In the 122-move first game she’d shown that she knew how to mate with a knight and bishop to take the lead. 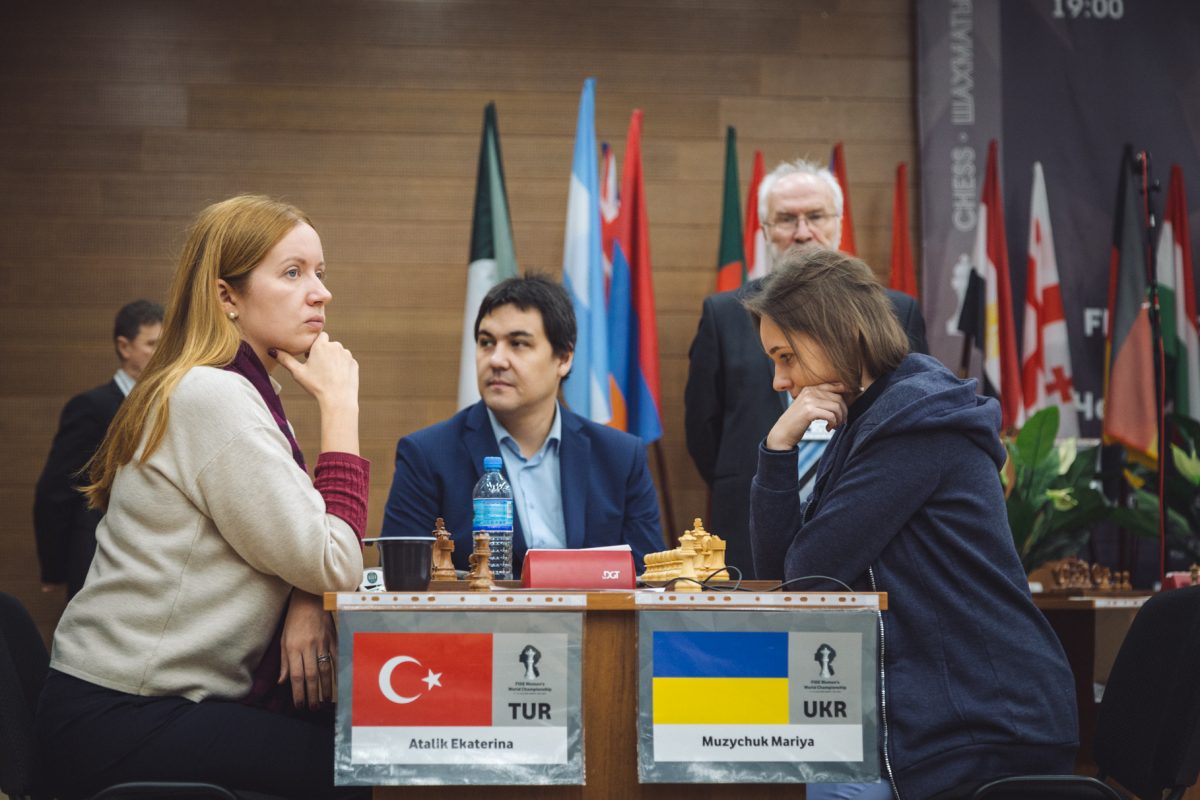 The Atalik-Muzychuk match was a fierce battle | photo: official website

In the second she had White, and in a way was unfortunate that instead of a quiet drawish position she ended up with one where she had a winning attack but lots of ways to go wrong. She blundered on move 29, but it was easy to miss the key saving idea for Black:

31…Qe1+!! 32.Rxe1 Nf2+ allowed Black to eliminate White’s queen and, when the dust had settled, be left simply a piece up. The game was over by move 40, and Mariya went on to win the second rapid game in the tiebreak to move to the next round. 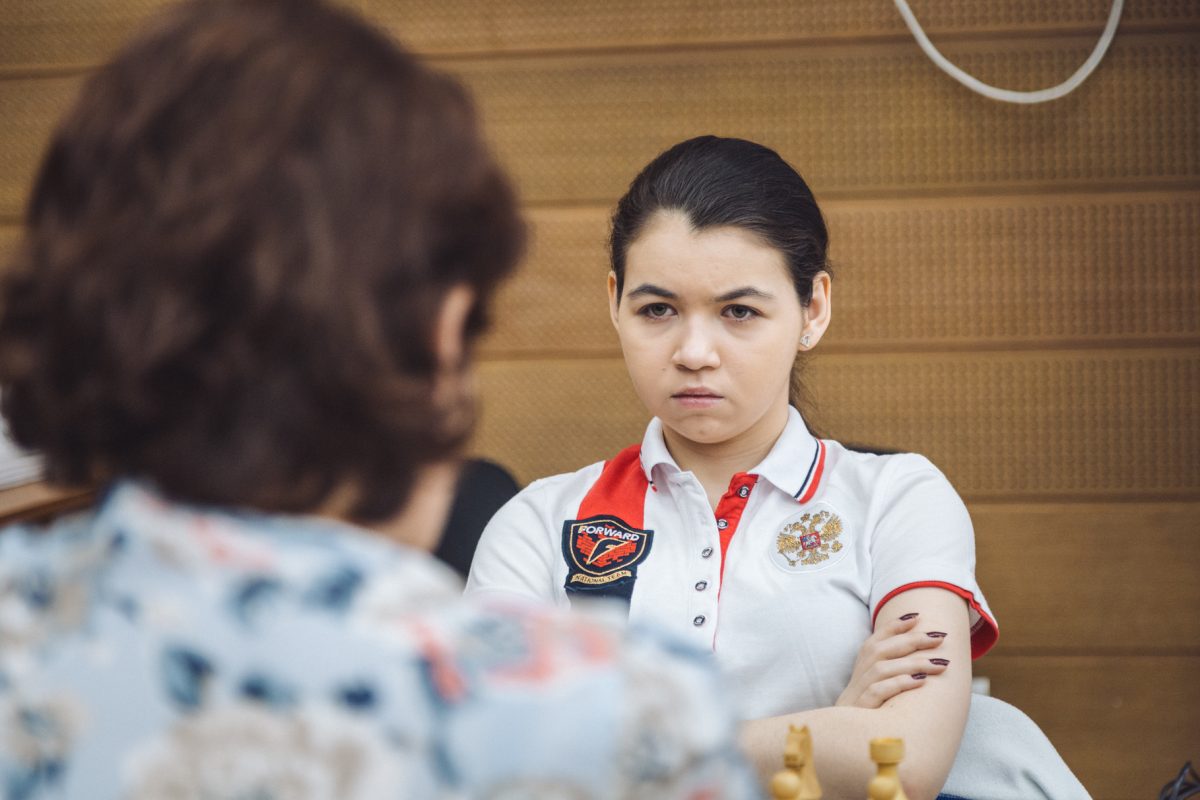 Favourites make it through

Elsewhere the favourites made it through, and in the 3rd round matches Anna Muzychuk vs. Antoaneta Stefanova, Alexandra Kosteniuk vs. Harika Dronavalli and Kateryna Lagno vs. Natalia Pogonina we’ve got the expected pairings based on the original seedings.

It’s getting serious now, as one more victory will take the players into the quarterfinals, and another win will not only earn them a place in the semifinals but a qualifying spot for an upcoming Candidates Tournament. 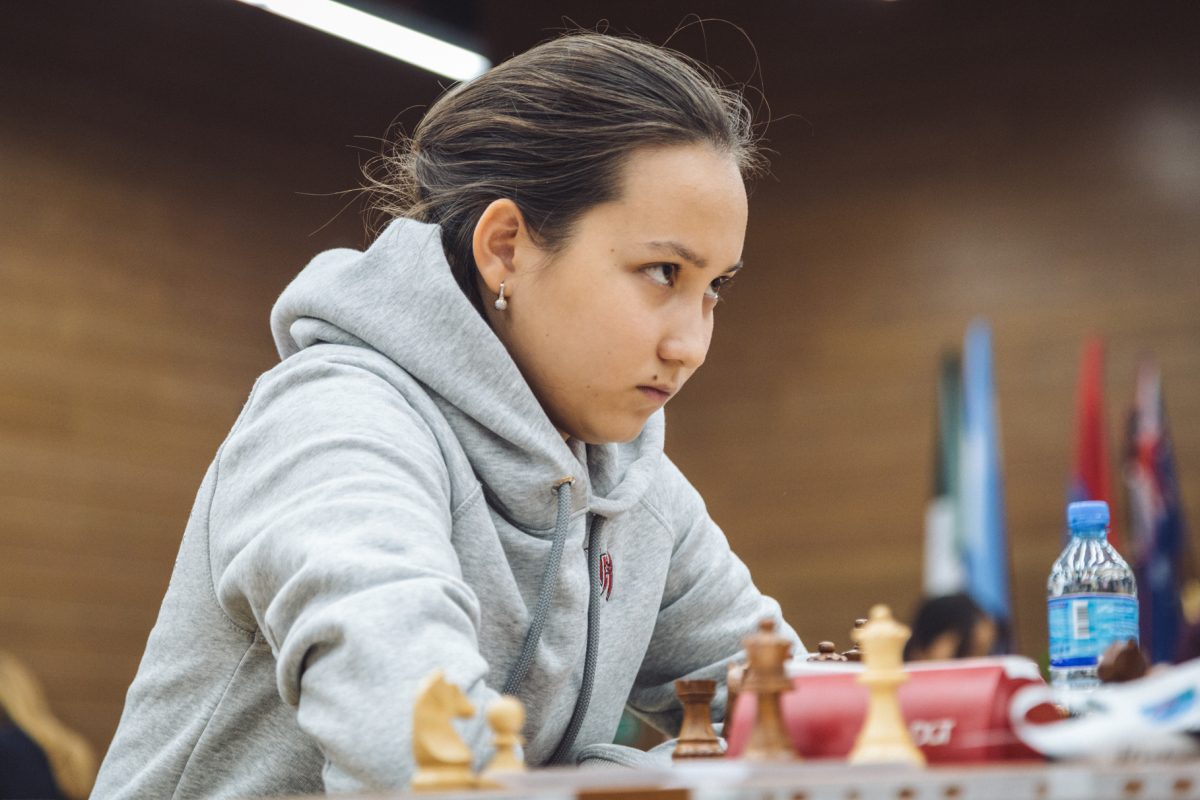 18-year-old Zhansaya Abdumalik is now favourite to make it to the quarterfinals when she faces Jolanta Zawadzka in Round 3 | photo: official website

The only question is, with the overall World Championship starting in London…

…will anyone be watching!

You can, with Alexander Morozevich and Pavel Tregubov providing English commentary from 11:00 CET here on chess24!