Sergey Karjakin, Dmitry Andreikin, Harikrishna and Vidit are among the 7 players who must win on Tuesday or they’re out of the World Cup after losing to Nikita Vitiugov, Jan-Krzysztof Duda, Kirill Alekseenko and Wesley So in a bruising start to Round 3. It was a day of small edges being converted into wins, except in Xu Xiangyu-Grischuk, where the Chinese player’s dubious pawn grab led to what Grischuk called “a huge fight, a crazy game”. The 9 draws included Peter Svidler pulling off a great escape after blundering against Liviu-Dieter Nisipeanu. 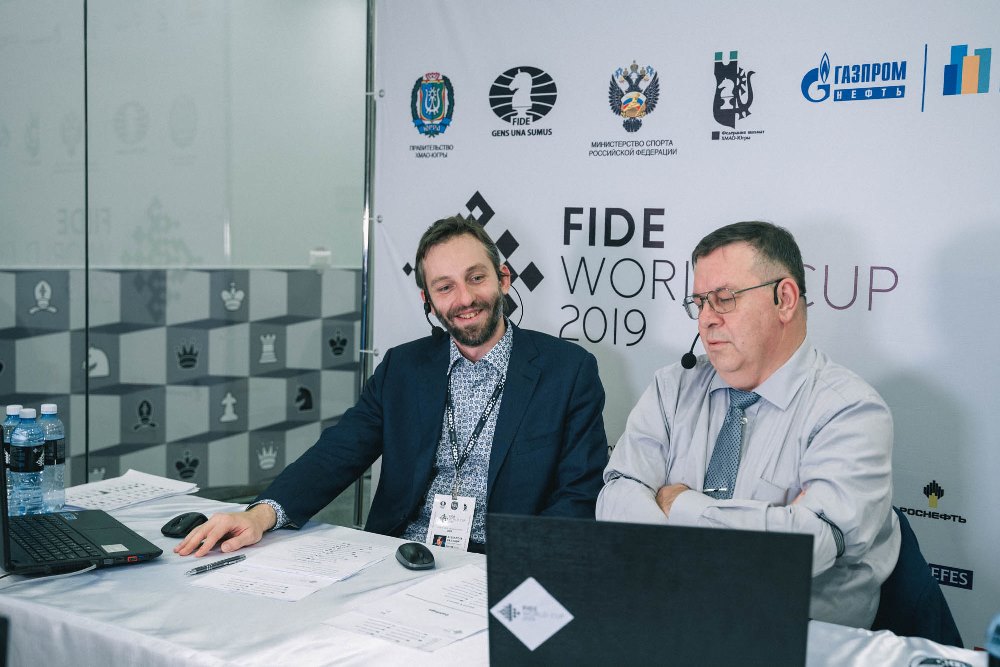 You can replay all the games from the 2019 FIDE World Cup in Khanty-Mansiysk using the selector below:

6 long squeezes and one explosion 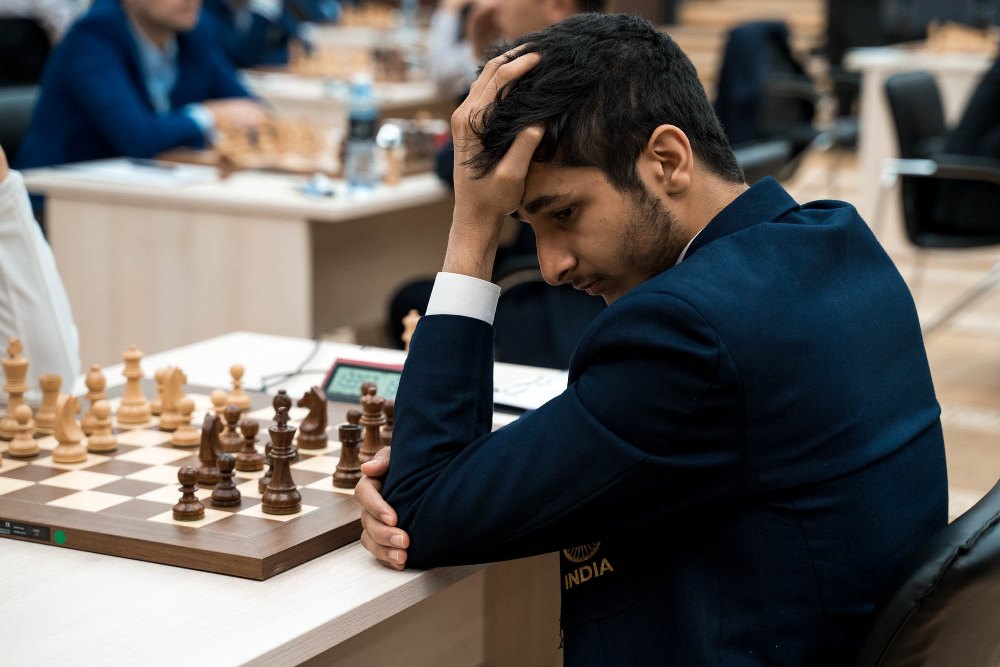 Vidit had no fun on the first day of Round 3 | photo: Kirill Merkuryev, official website

Where did it all go wrong is the question you could ask again and again on Monday. For instance, after 28 moves Vidit had 5 pawns and a rook against Wesley So’s 5 pawns and a rook, with a nearly symmetrical pawn structure:

It looked as though a draw would be agreed at any moment, but 38 moves later, after 66.Rxa6, the 7-piece tablebases were already calling the game for White:

It’s mate-in-39, and while no human can play perfect chess Wesley didn’t fall far short as he went on to win in 93 moves. 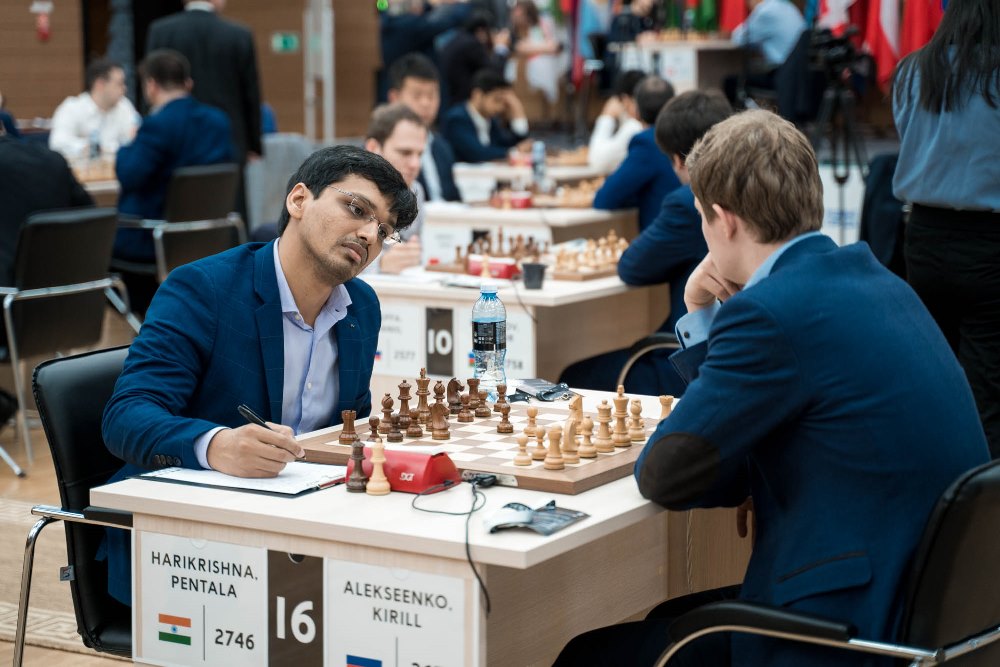 While seeing Wesley play in the manner of Magnus Carlsen of old was no great surprise, the way 22-year-old Russian Kirill Alekseenko outplayed Harikrishna was remarkable. He seemed to get a grip in the opening and then just picked up one pawn after another, with Hari’s attempts to get counterplay only easing the task. 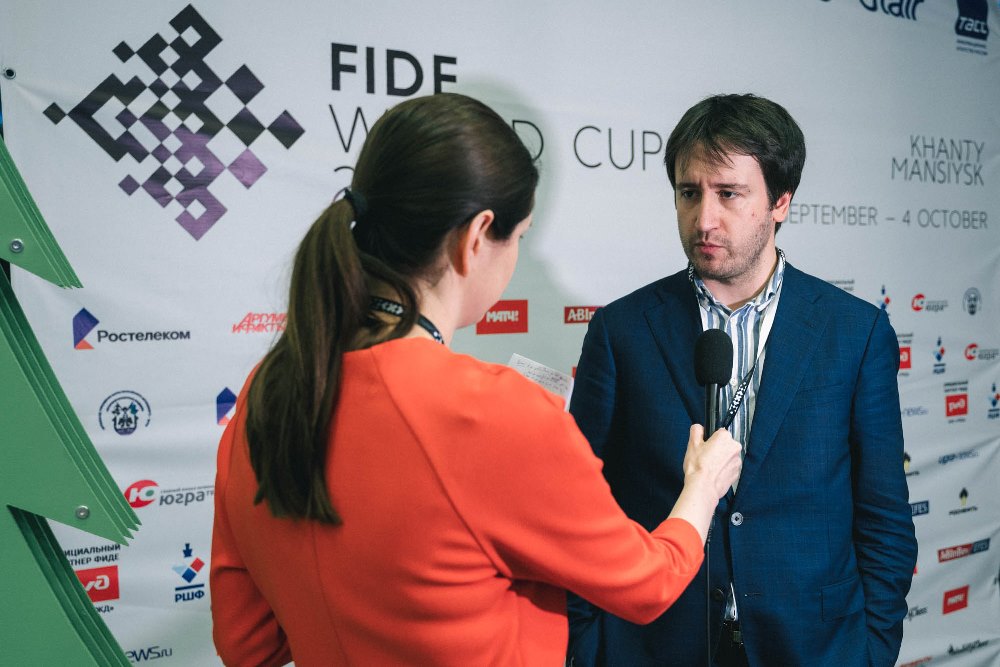 It was a similar story as Teimour Radjabov made Daniil Yuffa’s aggressive play with Black look foolhardy as he sailed to victory in 45 moves. The game was a reminder of just how strong a player Radjabov is, but afterwards the 32-year-old Azerbaijan no. 2 didn’t exude confidence in his chess future. He claimed, “I’m not really thinking much about my chess recently”, said “all the people I used to play with are leaving chess,” and added that he was almost, “waiting for some other bad result when I can finally say bye bye!”

Dark clouds are looming on the horizon for Radjabov in the form of the Azerbaijan no. 1 Shakhriyar Mamedyarov, who it looks highly likely he’ll play in Round 4. Shakh had the black pieces but by move 11 was a pawn up against another compatriot, Eltaj Safarli, the man who knocked out Sam Shankland and Nihal Sarin. What followed was curious, as Eltaj chose to resign in the following position:

While it’s true the a-pawn is going to cost White his rook, it’s far from clear that the white kingside pawns wouldn’t be strong enough to rescue a draw. At the very least, the resignation looked premature.

21-year-old Pole Jan-Krzysztof Duda is up to world no. 20 on the live rating list after a fine start in Khanty-Mansiysk: 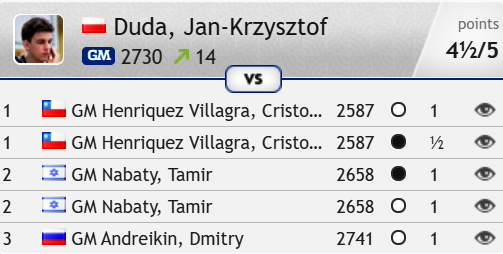 The win over Dmitry Andreikin came in their first ever classical game, though Jan-Krzysztof admitted that when he was left with doubled g-pawns by move 16 he was thinking only of how to draw. The weakness became a strength, as the g3-pawn advanced to g5, and Duda was eventually able to liquidate into a very good ending:

He was refreshingly honest as he admitted:

I didn’t see for a long time 37.Qg4!, the move winning instantly, I think, but luckily after 20 minutes of thought I spotted it!

If after 37…Qxg4 38.hxg4 Andreikin had played 38…Re4 he might have put up more resistance, but after 38…Rxg4 39.Rxe3 Duda went on to smoothly reel in the full point. Andreikin didn’t lose a classical game in the 2013 World Cup except for the first game of the final against Vladimir Kramnik, but he’s going to need to win on demand on Tuesday to stay in the event.

Another World Cup hero, 2015 Champion Sergey Karjakin, made life very tough for himself by losing to compatriot Nikita Vitiugov. It was a game where there was a difficult question of where Black went wrong, if you were talking about slipping into an unpleasant position, but there was no problem at all in identifying when everything finally fell apart! 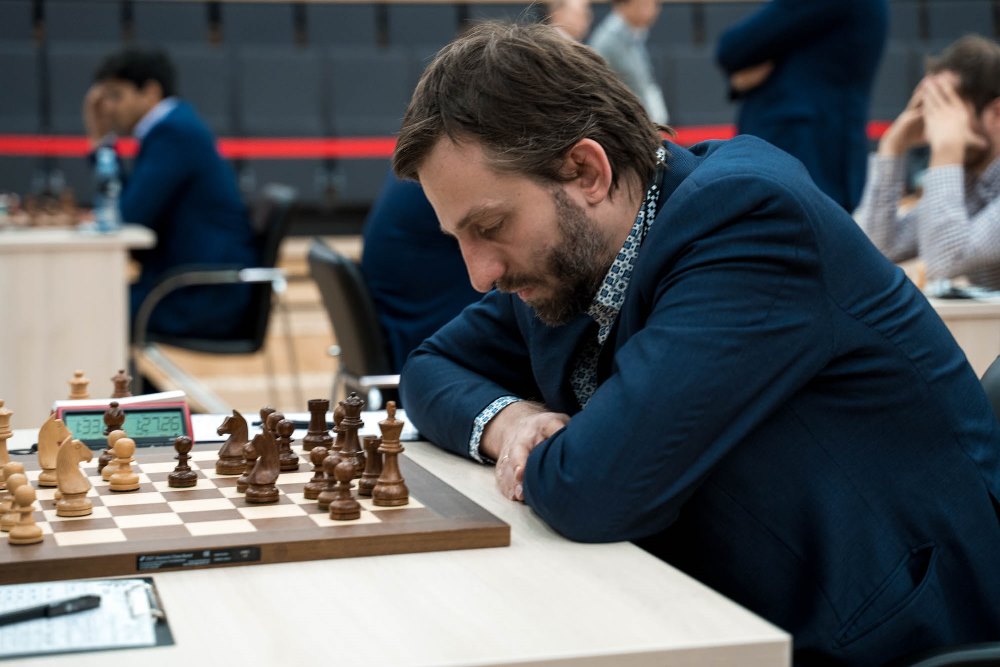 For a couple of days in a row we've had the unusual spectacle of Alexander Grischuk being ahead on the clock | photo: Kirill Merkuryev, official website

And now for something completely different… Grischuk-Xu Xiangyu was nothing like those slow grinds, as 19-year-old Xu Xiangyu from China went for a pawn grab just out of the opening. “I think he just blundered here, because you need to be crazy to go for it with White voluntarily”, commented Grischuk, who felt his 16…Qh4! response shook the Chinese player. There was no turning back as Xu threw his pieces at the black king and, for a second time in two days, took with a rook on g7. It almost worked again, since Grischuk played 24…Be7? instead of the winning 24…Qh3! (a move he'd seen and considered):

Instead 25.Qc6 was played, and after 25…Bxf5! Black was winning comfortably, even if Grischuk was ultimately provoked into playing a brilliancy:

Grischuk’s postgame analysis gives a vivid idea of what players see, and don’t see, during such a nerve-wracking encounter:

9 draws, as Svidler resists the urge to resign 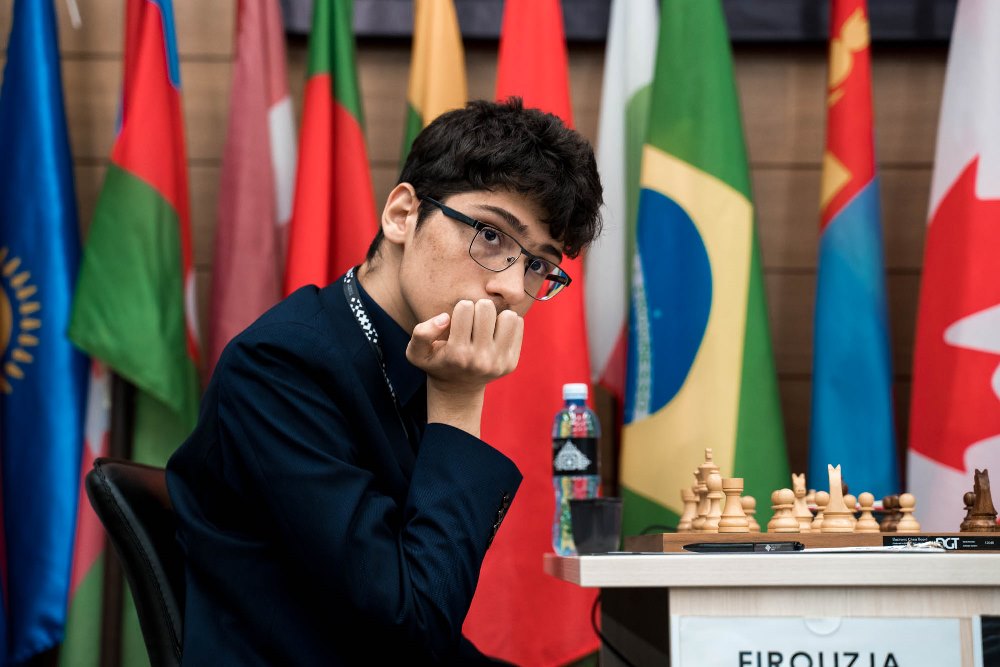 The remaining games were drawn, and although some had very little content there was plenty to admire elsewhere: Anish Giri rejected a draw by repetition, Levon Aronian and Maxim Matlakov found “the least forced draw repetition ever!” (Fressinet), there were tough fights in Le Quang Liem-Artemiev and Yu Yangyi-Wei Yi, and Firouzja-Ding Liren was both one of the shortest games of the round and one of the most intense. 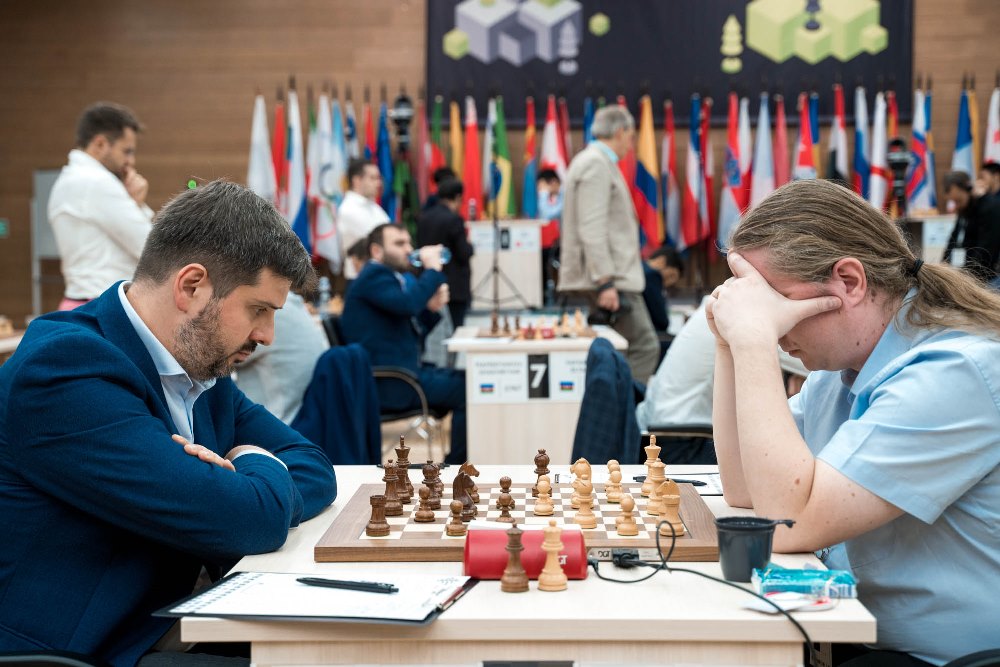 The closest we came to blood being spilt in those draws, however, was in Nisipeanu-Svidler. Peter Svidler probably hadn’t missed the following bolt from the blue:

31.Bxg6! But he was caught on camera afterwards telling his opponent that he thought they would just "go home", presumably if his 31…fxg6? (31…Nxe5!) had been met by 32.Qxc4+ and White can make a draw with perpetual check on c4 and h4. Instead Liviu-Dieter Nisipeanu unleashed 32.Rxc4! and suddenly White's threats include mate-in-2. Peter said he was tempted to resign, but luckily he played on and found a trick that limited the damage to being only a pawn down in a queen ending. The game lasted until move 88, but White survived.

That means Peter isn’t in the same boat as Harikrishna, Xu Xiangyu, Vidit, Karjakin, Andreikin, Safarli and Yuffa, who must all win on demand on Tuesday to stay in the World Cup. Don’t miss what’s guaranteed to be a great day’s chess. Follow all the action live here on chess24 from 12:00 CEST.