Khanty GP, Round 5: Dress codes and other shocks

Sergey Karjakin won an epic 99-move 7-hour marathon to move into contention for one of the Candidates Tournament qualifying places, but it came at the cost of putting a dent in the chances of fellow Russian Evgeny Tomashevsky. Another Russian, Dmitry Jakovenko, beat an out-of-sorts Maxime Vachier-Lagrave, while Peter Svidler’s survival against Hikaru Nakamura already felt like a victory. The remaining games were drawn in less thrilling fashion. 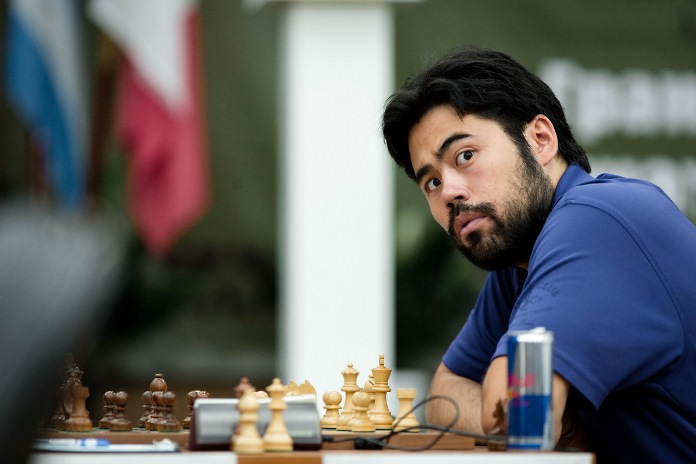 It was a quiet day at the FIDE Grand Prix punctuated by some shocking moments! | photo: Kirill Merkurev, official website

Let’s start with the most memorable image of the day. We speak, of course, of Baadur Jobava’s Austin Powers-like display of chest hair

It wasn’t entirely coincidental that the post-game press conference turned to the subject of a dress code:

The game itself saw a draw which kept Fabiano Caruana in the sole lead, though he said he hadn’t expected his opponent to repeat the curious Caro-Kann with an early f6 he'd used against Maxime Vachier-Lagrave in Round 2 and had no bright plan to refute it. 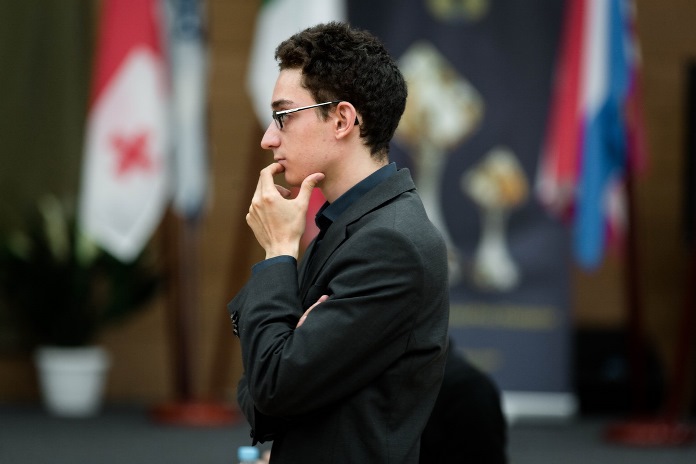 The draws in Giri-Dominguez and Grischuk-Gelfand were also nothing to write home about, although the latter was followed by a press conference that was another star turn for Grischuk. He wasn’t exactly thrilled by his play, as you’ll gather from his opening remark:

One draw stood out from the crowd, though – Nakamura-Svidler. 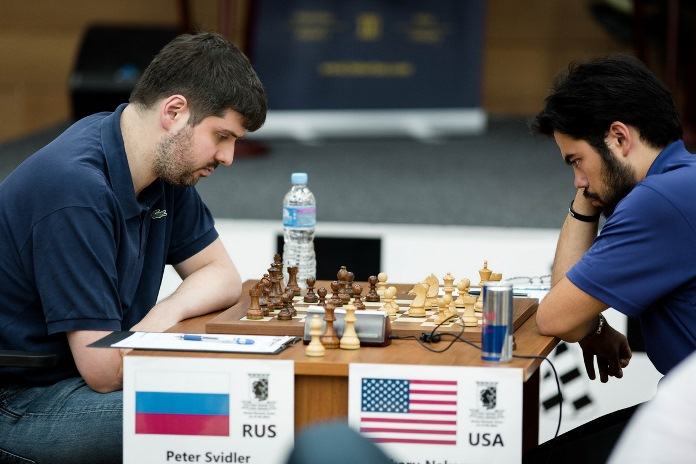 The most spectacular game of the round: Svidler-Nakamura | photo: Kirill Merkurev, official website

Peter got into huge difficulty after committing the crime (for how else can we characterise it?) of not following his own recommendations in his Grünfeld series here on chess24. Jan Gustafsson takes us through the game (this is the second version with the audio now fixed):

As always when Svidler’s involved, the press conference is worth a look:

So that leaves us with two very different wins.

Ever since being hand-picked as the final player to take part in all three Grand Chess Tour events Maxime Vachier-Lagrave seems to have been on a one-man mission to make that choice look misguided. He scored -2 with no wins in Shamkir, is now -2 with no wins in Khanty-Mansiysk and interspersed the two events with a draw and a crushing loss to a 2410-rated player in the Italian Team Championship. He’s now down at 2732.7 and world no. 27 on the live rating list after being no. 11 on the official FIDE rating list as recently as April. 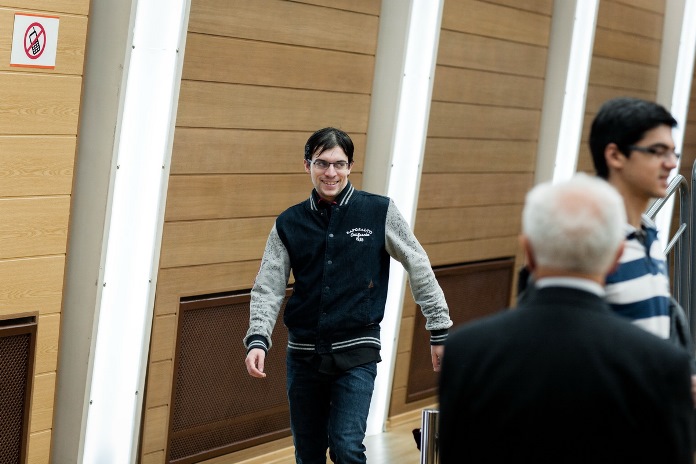 Even the elements were against Maxime in Round 5 | photo: Kirill Merkurev, official website

Today’s loss was another tale of woe, based on a single disastrous move that Maxime himself couldn’t explain:

16…Bxh6??, as Maxime soon realised to his horror after playing it, ran into the zwischenzug 17.Nxe5! and it was an uphill struggle to survive. A final blunder on the move before the time control sealed the Frenchman’s fate.

While the action was soon over on the other boards Sergey Karjakin and Evgeny Tomashevsky were just getting started in a game that moved at glacial pace. 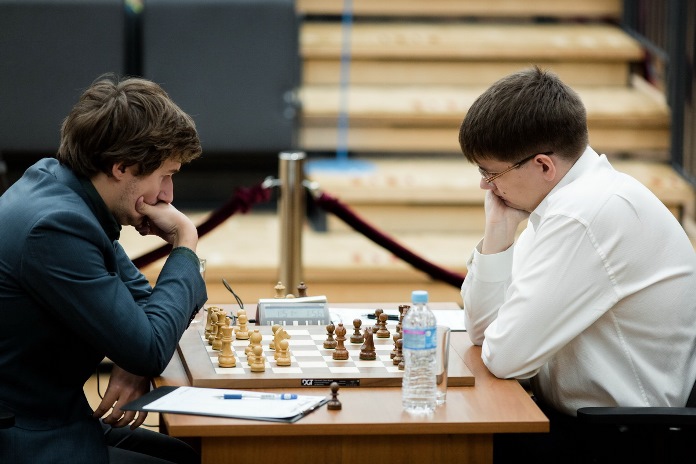 In for the long haul! | photo: Kirill Merkurev, official website

Tomashevsky had 66 moves to regret not taking the pawn on d3 when he had the chance:

He explained afterwards that at this point his thoughts had turned to playing for a win, but it was Sergey who finally began to push forwards with 70.e4! and five moves later played a move both players admired, 75.a4!

Tomashevsky mistakenly took the pawn, allowing Sergey to demonstrate his idea with 76.Bc4! – soon the white bishops were a force to be reckoned with and the white b and d-pawns were unstoppable:

Perhaps the most memorable part of the game was the manoeuvring phase, though, and the peregrinations of the white king:

Evgeny Tomashevsky admitted afterwards that he’d so far been unable to recover from missing a simple win against Alexander Grischuk in Round 2. 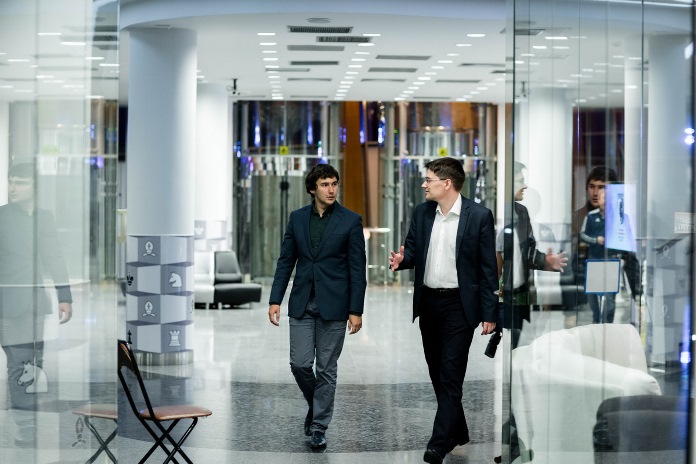 Luckily the venue is dedicated solely to chess, so it was still open when the players strolled back from their games after seven hours of play | photo: Kirill Merkurev, official website

That would have taken him to +2, but on -1 now he would still qualify for the Candidates Tournament alongside Fabiano Caruana if the tournament ended today.

In Round 6 Tomashevsky has White against his closest rival for Candidates qualification, Hikaru Nakamura. Don't miss the action live here on chess24! Alternatively you can watch on our free mobile apps: