Round 9 of the Chess Olympiad coincided with the FIDE Presidential Election. Garry Kasparov was aiming to take over from Kirsan Ilyumzhinov, but what was intended to be a new highpoint in his glorious career ended in disaster for Garry.

A personal look back by Georgios Souleidis (translated from German)

It began on Sunday 10th August, late in the evening, when I wondered whether to attend the General Assembly of the 85th FIDE Congress the next day. After a long working day getting some sleep was a top priority, but I wouldn’t have forgiven myself if I’d stayed wrapped up snug and warm in a Norwegian duvet when chess history was being written elsewhere.

At breakfast I ran into Leontxo Garcia and asked him how he was planning to get to the scene – naturally with the sly aim of following him. That I found myself in such a predicament was down to the unsatisfactory information policy of all the possible people who should really have known about it. 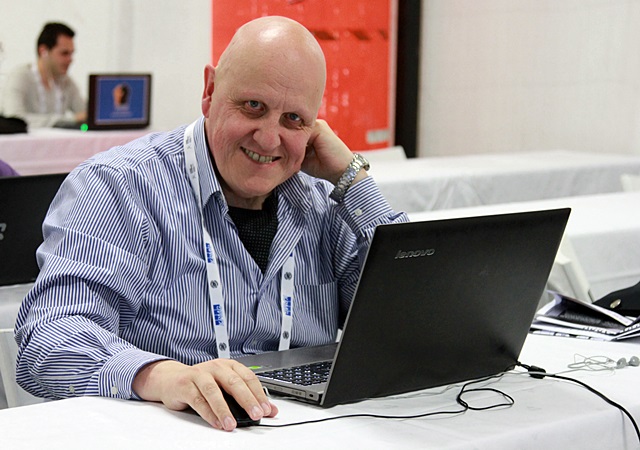 The evening before it hadn’t been clear to me if journalists were allowed to use the same buses as the delegates. The election was, after all, taking place in the University, that lies some way out of the city centre in which almost everyone is staying. Accurate information would have spared me, for example, interrogating a young receptionist at 1am in the morning about public transport.

But ok, I got lucky, since as the proud owner of one of the “super-badges” for those working for the Olympiad organisation I was able to use one of the buses heading to the uni. Like many others I arrived a little late, but it was no big deal. I’d only missed the hymn – yes, FIDE has its own hymn, as does Norway, of course – and the official welcome. 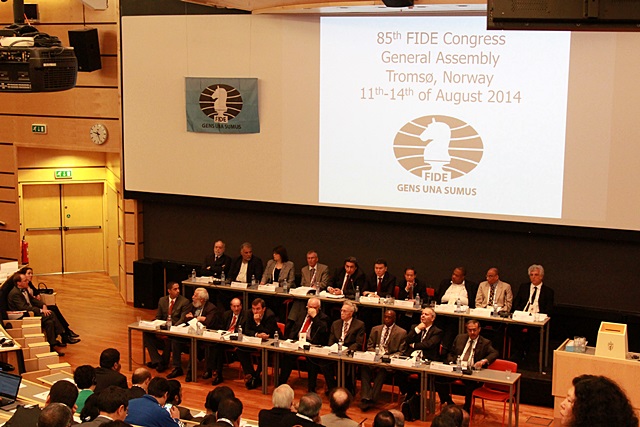 Sitting on the stage are the people who Garry Kasparov and his team were hoping to replace | photo: Georgios Souleidis

Hmm, why had I let myself in for this little adventure? Sure, I could cite my duty as a chess journalist to be on the scene, but that’s only a small part of the truth. Instead I was much more drawn to the Assembly by the prospect of seeing the end of such a close race between the candidates – who, if not Kasparov, could alter the FIDE status quo? – and especially as so many people had tried to convince me that it would be incredibly heated, that sparks would fly with the opposing camps shouting at each other and the overpaid lawyers weighing in with threats… Of course I also wanted to be there to have a little fun and, most importantly: I wanted to take my own photos!

I won’t mince words: it was a boring event. The election was decided in advance and the FIDE Congress merely provided the backdrop for the final act.

Of course Kasparov put up a show of fighting spirit and his team exuded optimism – obviously you want to use your last breath to persuade any swing voters – but at the very latest during the first round of applause the difference between the sides was clear: oh, so there’s a huge imbalance here.

60-40 was realistic at first, but the scales tipped further in Kirsan’s favour the longer the day went on – it’s rumoured that many of those clapping so hard their hands must have hurt were hot-blooded South Americans.

I’ll spare both you and me the details such as the assignment of proxy votes – voting on the part of another delegate not in attendance (or in attendance…) – or the inter-African feuds. The final count of 110 to 61 in favour of Kirsan Ilyumzhinov is just too clear. It made no difference that Garry Kasparov had eloquent advocates like Nigel Short in his ranks, or that Rex Sinquefield waved his chequebook with the promise of 10 million dollars on the day after the election. 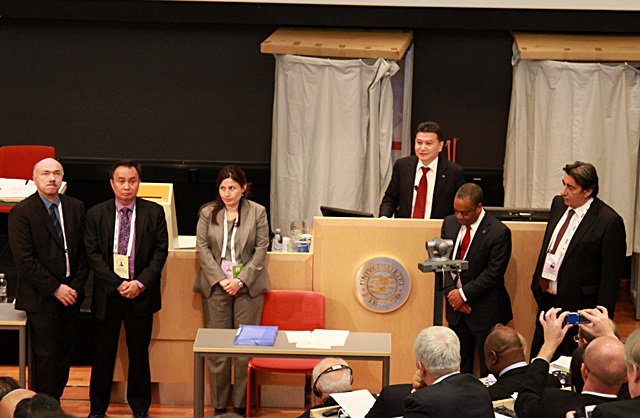 Kirsan on the stage with his team | photo: Georgios Souleidis

Kirsan stepped up to the podium and simply trumped the 13th Chess World Champion:

And the old and new president was in a generous mood, promising immediately afterwards:

His supporters could no longer contain themselves.

Once again: no riots, no threats, no scandal… 110-61 was, I repeat, simply too much. All that remains for me is this photo: 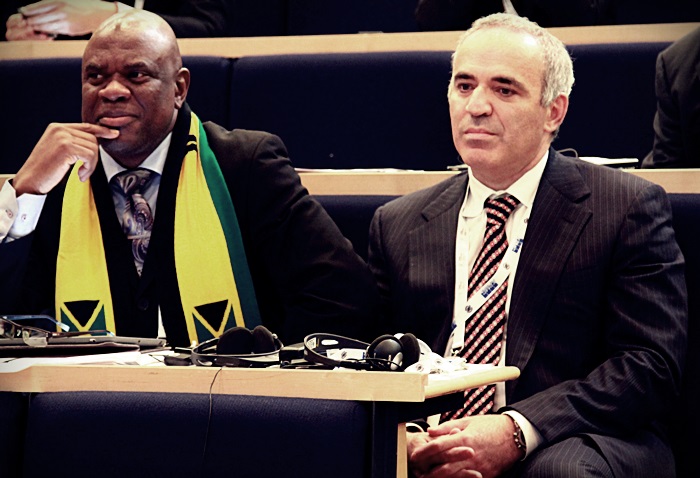 Was running up against Kramnik’s Berlin Wall as painful as the moments after losing the FIDE Presidential Election? | photo: Georgios Souleidis

P.S. It was still a beautiful day. During the lunch break I enjoyed the sun with a very affable colleague who works for completely the wrong website…

…and during the laborious voting procedure I got to know a nice colleague from Kenya, with whom I talked, among other things, about chess in Africa.

So the trip was worth it!