World Champion Magnus Carlsen tops a field featuring no less than 9 of the world’s top 10 players as the second leg of the 2019 Grand Chess Tour begins today in Zagreb. Tuesday’s opening ceremony was attended by both Croatian Prime Minister Andrej Plenković and one of Croatia’s most famous sons, Garry Kasparov, who was granted citizenship in 2014. The event is a 12-player classical round-robin, which means 11 days of live commentary as the world’s best chess players battle it out for the $90,000 first prize and up to 20 Grand Chess Tour points. 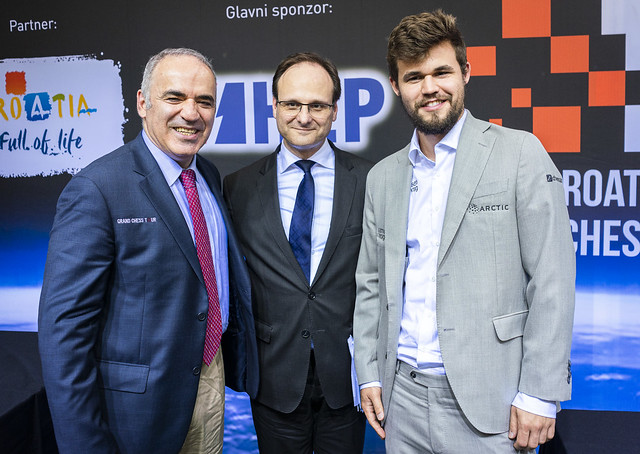 The Croatia Grand Chess Tour action starts at 16:30 CEST each day from June 26th to July 7th, with just a single rest day on Tuesday July 2nd. The pairings are already out, with the Giri-Carlsen grudge match and the all-US clash Caruana-Nakamura among the highlights of Round 1:

The players with White in Round 1 have the advantage of six Whites and only five Blacks in the 11-round event.

The pendulum swings back to classical chess 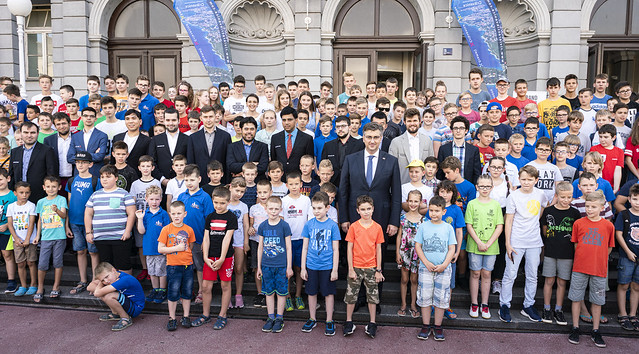 The Grand Chess Tour started in 2015 by combining three classical events - Norway Chess, the Sinquefield Cup and the London Chess Classic - but by 2018 it had become largely a rapid and blitz series, with only the classical Sinquefield Cup before the finals in London. Hikaru Nakamura was able to take the top prize without winning a single classical game.

That changes in 2019, when all 12 tour regulars will play in both this new tournament in Croatia and the Sinquefield Cup in St. Louis, which will have exactly the same format. Players can score a maximum of 40 points in classical chess (20 for clear 1st), topping the 39 (13 for clear 1st) available in the three rapid and blitz events each player competes in. 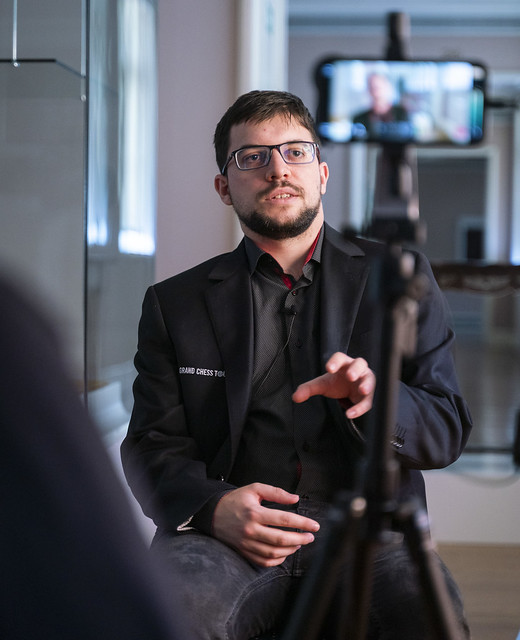 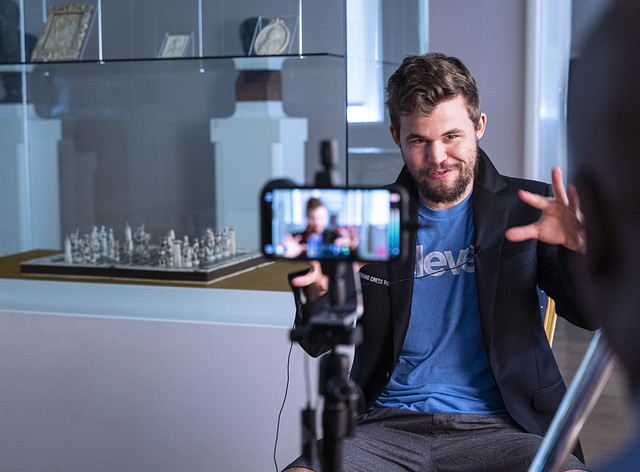 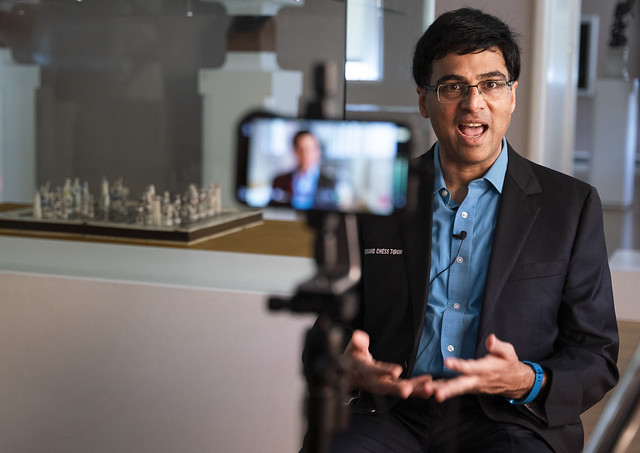 But there's only one Tiger from Madras! | photo: Lennart Ootes, Grand Chess Tour

The time control is an unusual one, which is both generous – players have 130 minutes compared e.g. to the 90 minutes for 40 moves of the FIDE control, and a challenge – there’s no extra time at move 40 and there’s a 30-second delay rather than an increment, so if players manage their time badly they’ll end up in permanent time trouble by the end of the game. No draw offers are allowed at any time.

Garry Kasparov was present at the opening ceremony and has already promised to join the commentary:

It’s fair to assume that bringing one of the strongest chess tournaments in history (only Alexander Grischuk is missing from the Top 10 on the live rating list) to Croatia is in large part down to Garry Kasparov, who as well as being the driving force behind the tour has also been a Croatian citizen since 2014. That was partly a necessity to allow Garry to travel freely while criticising the Russian government, but he’s long made Croatia one of his homes. Two of the players in the current field have spent time at Garry’s summerhouse in the country. 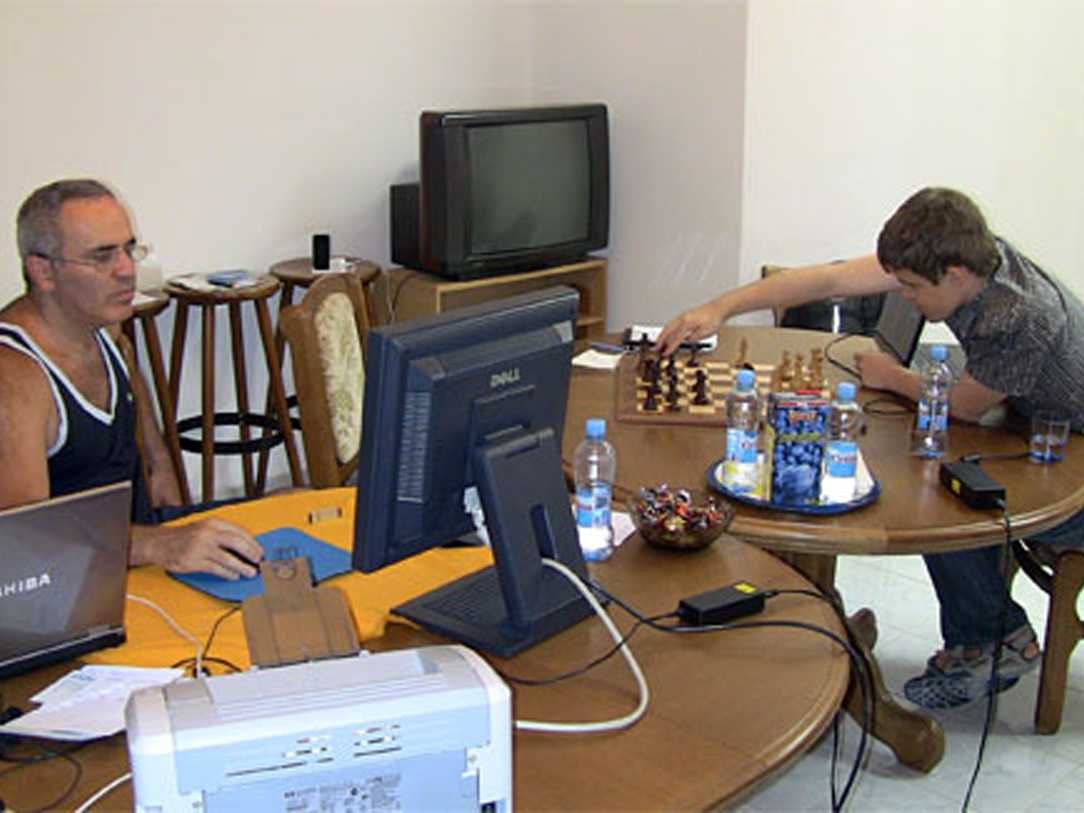 A Kasparov-Carlsen training camp in Croatia back in 2009 | photo: Kasparov.com

In 2009, when an 18-year-old Magnus Carlsen was on the verge of taking over at the top of world chess, he began a more than year-long collaboration with Kasparov. That period included one of the most stunning chess tournament performances of all time – Magnus finishing 2.5 points clear of the field in the Pearl Spring tournament in Nanjing, China: 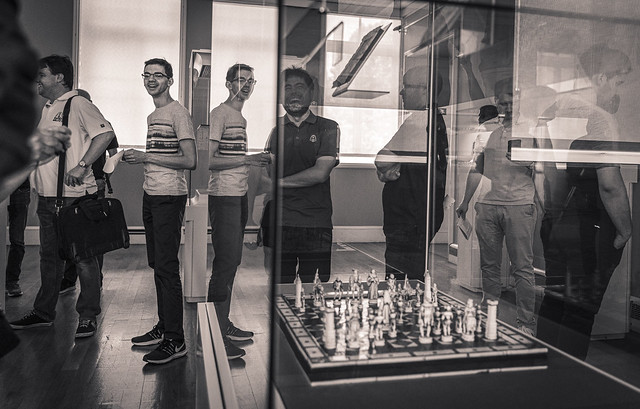 Hikaru Nakamura is in Zagreb with his second Kris Littlejohn - Hikaru once famously said that Kasparov and Kris tend to come to the same conclusion on chess openings, but Kris is faster! | photo: Lennart Ootes, Grand Chess Tour

In 2011 it was the turn of Hikaru Nakamura to visit Garry in Croatia, with the start of their less than a year working together coinciding with perhaps the best result of Hikaru’s career – clear first ahead of almost all the world’s best players in the 2011 Tata Steel Chess in Wijk aan Zee:

Nakamura will be out to prove he can still battle with the best in classical chess in Croatia. It seems he’s spent the run-up to the tournament on the Amalfi Coast south of Naples, Italy, which has been inspiring him to quote the poet Longfellow:

For Magnus, meanwhile, it’s always as much a battle with himself as the rest of the field. Depending on his score he could set new rating records in Zagreb…

…but we’ll have to wait and see in what kind of form the World Champion will be in. He was 0.2 seconds away from scoring 15/15 in his Banter Blitz session on Sunday, but that involved far more crazy time scrambles than we’re used to seeing from Magnus…

…while he also currently finds himself embroiled in a furious debate in Norway over whether the Norwegian Chess Federation should accept sponsorship from a gambling company in return for lobbying for the break-up of the government monopoly on gambling. It may be good to get away from that and focus purely on chess! 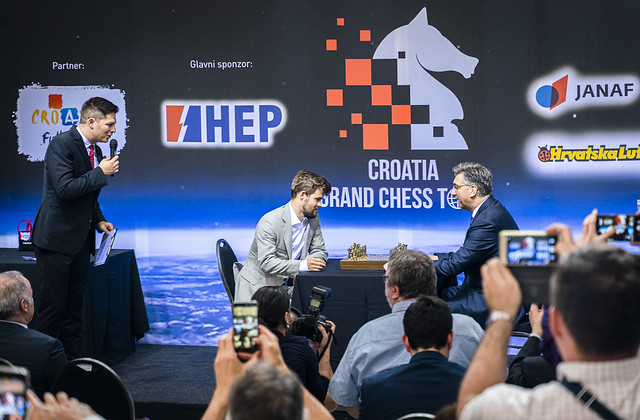 Of course Croatia is associated with more than chess and Kasparov, as any glance at Levon Aronian or his wife Arianne Caoili’s social media will swiftly remind you. They had a Game of Thrones inspired visit to Dubrovnik, on the Adriatic Sea:

You could make a case for anyone ending the Croatia Grand Chess Tour sitting on the iron throne (the bottom seed Sergey Karjakin was a couple of rapid games away from becoming World Champion!), so it’s guaranteed to be an intriguing fight. 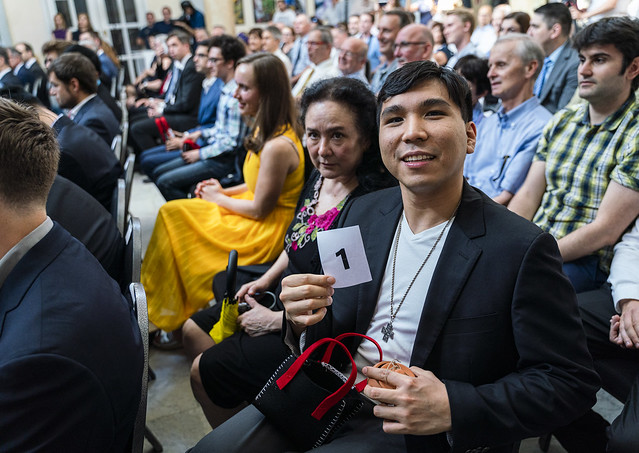 Don’t miss all the action here on chess24, where we’re going to have commentary in English, Russian, German and Spanish from 16:30 CEST!