The knockout Finals of the ground-breaking Julius Baer Challengers Chess Tour kick off on Thursday with German chess prodigy Vincent Keymer favourite to be crowned champion, though he'll face stiff competition from the likes of Praggnanandhaa and Nodirbek Abdusattorov. The 16-year-old, from the port city of Mainz, won two of the Tour’s four “Challenge” events to top the leaderboard going into the four-day decider.

Keymer is one of three members of Team Polgar, coached by the legend Judit Polgar, to have made it to the Finals. Team Polgar has already secured the team battle against Vladimir Kramnik’s Team Kramnik. However, Team Kramnik has five representatives in the Finals and will be looking to scoop the individual title. 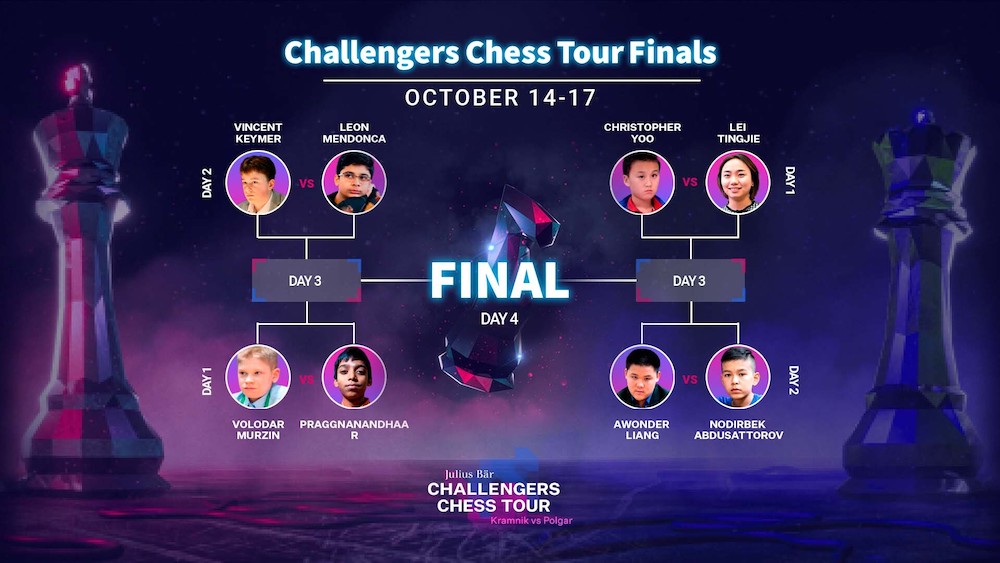 At stake is $12,500 for the winner and a regular spot in next year's elite Meltwater Champions Chess Tour as a Tour Ambassador.

But perhaps the big draw for the event is that both former World Champion Kramnik and Polgar, the strongest female player in history, return to the commentary box to give expert insights on their players.

The Julius Baer Challengers Chess Tour is unique in that throughout the series, which started back in April, all the players have received support from teams of coaches headed by their captains.

It is part of a conscious effort by the Play Magnus Group to develop young talent, advance gender equality in the sport and find the next big stars in the game. 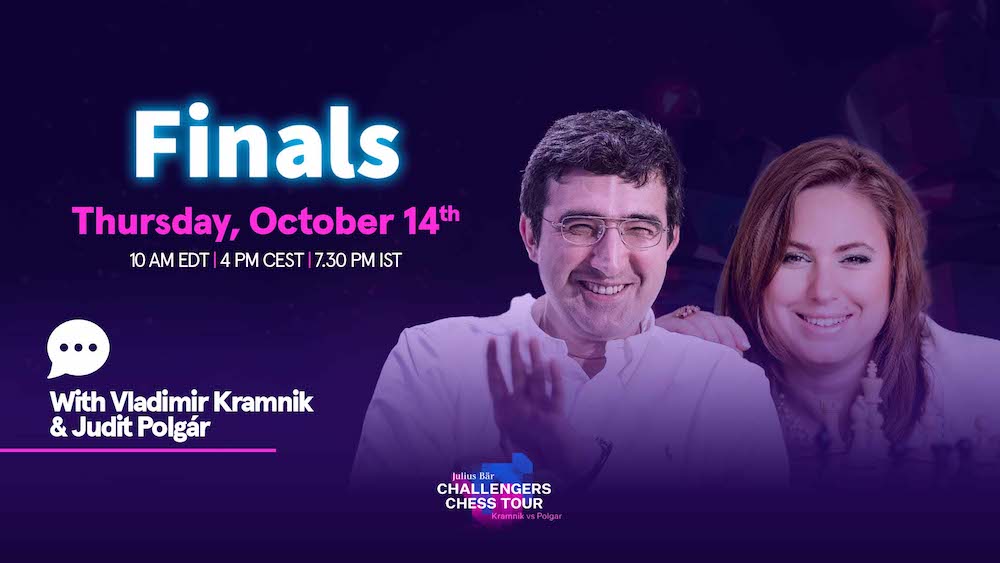 Going into the Finals, the Americans Awonder Liang and Christopher Yoo occupy joint-second spot on the leaderboard followed by the up-and-coming young Russian Volodar Murzin.

Yet after Keymer, it is Uzbek star Nordirbek Adbusattorov and the Indian wonderkid R. Praggnanandhaa who are tipped for glory.

Adbusattorov is 16 but has already been a grandmaster for almost four years, while Pragg has been storming up the senior rankings and has Meltwater Champions Chess Tour experience after competing in the New In Chess Classic.

China’s Lei Tingjie is the sole survivor from the female ranks. The Tour started with a roughly 50/50 line-up but, despite several strong performances, all the other female players have been eliminated.

Despite having dominated the first two Challenges, only two of India's rich crop of young talent have made it to the final. Praggnanandhaa is joined by only the second Grandmaster from Goa, 15-year-old Leon Mendonca. 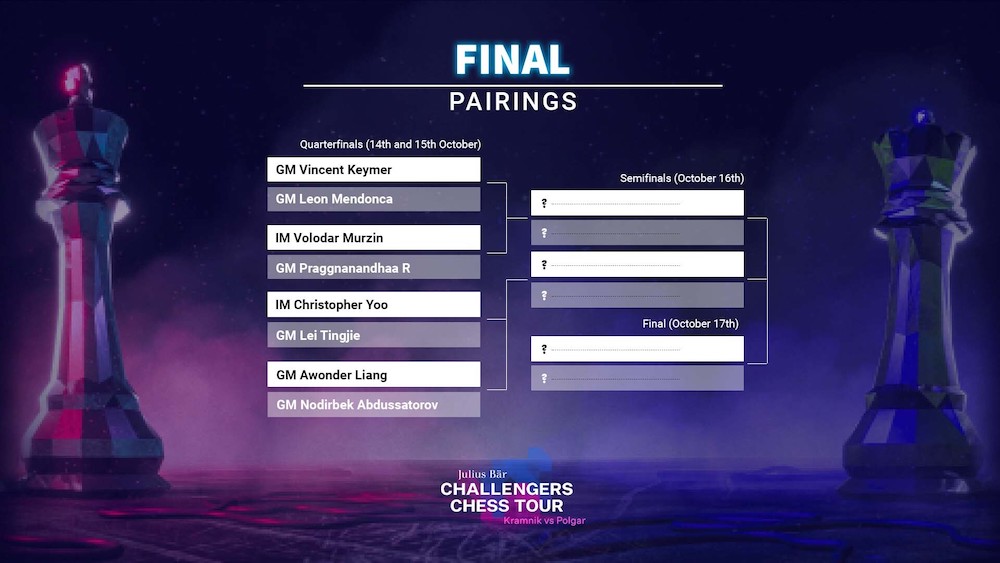 Polgar and Kramnik joined forces with Play Magnus Group back in April to host the elite series of online tournaments. Julius Baer, the Swiss private bank that has supported the Meltwater Champions Chess Tour, is the event’s title partner.

There were four Challenge events on the Tour leading into the Final playoff. 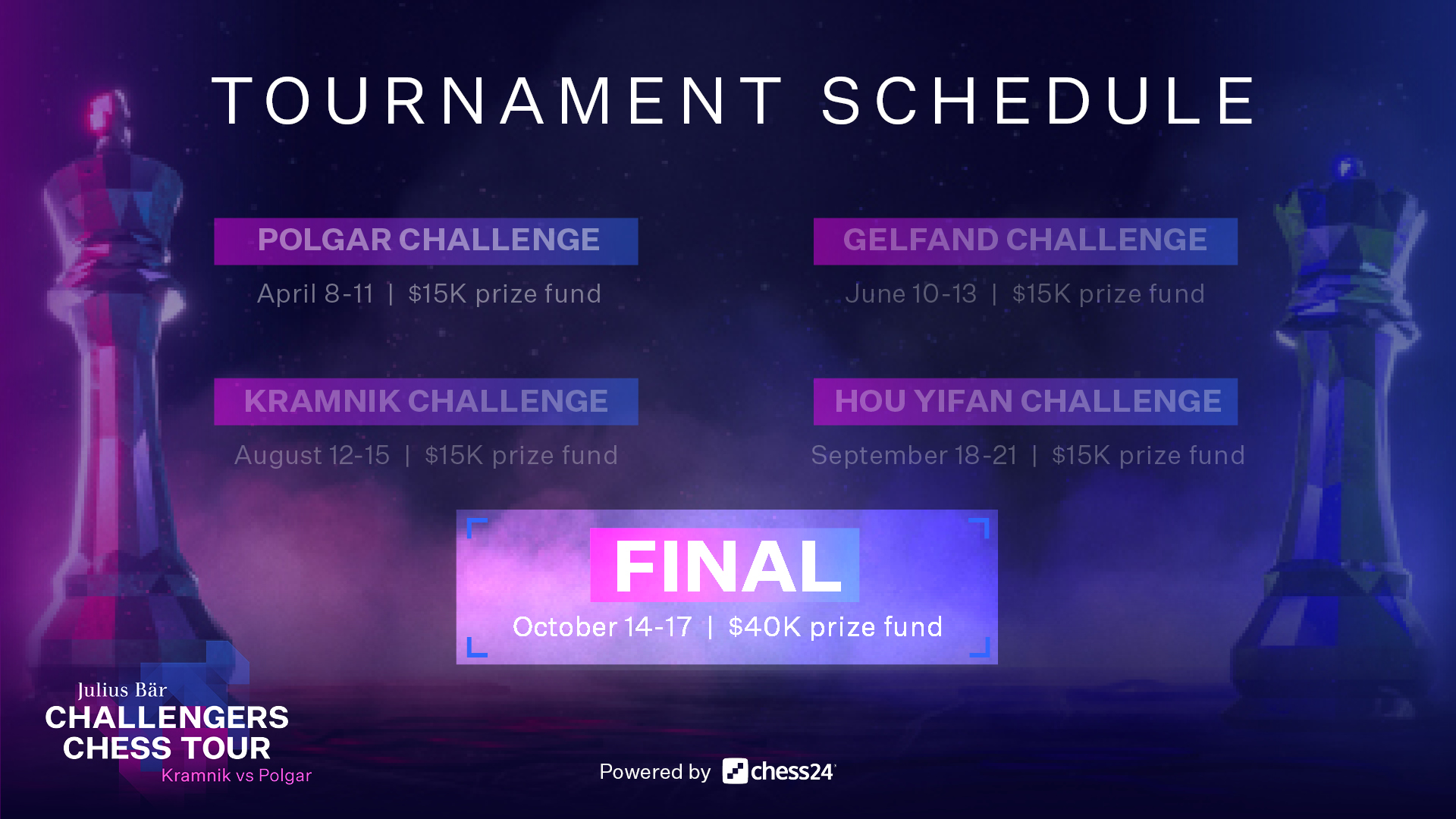 The winner of each event was given the chance of a place on the $1.6 million Meltwater Champions Chess Tour, Play Magnus Group’s flagship series.

The format for the final 8-player knockout will be four rapid games with 10 minutes per player for each game, plus a 5-second increment added each move. If the score is level at 2:2 a playoff will feature two 5+3 blitz games before, if needed, an Armageddon play-off.