Reigning Women’s World Champion Ju Wenjun is a single win or two draws away from retaining her title after turning the match against Aleksandra Goryachkina on its head with wins in Games 9 and 10. The first involved some serious gambling from Ju Wenjun and could have gone either way, but in Game 10 Goryachkina committed a form of chess suicide as she threw herself against the rocks of her opponent’s super-solid setup. 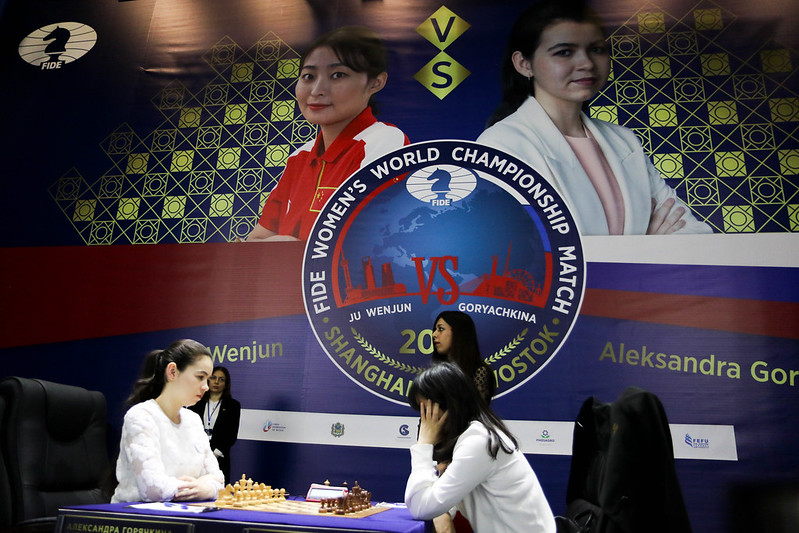 You can replay all the games from the Women’s World Championship using the selector below:

And here’s the live commentary by Hou Yifan and Nigel Short on Games 9 and 10:

When Aleksandra Goryachkina won Game 8 in style everything seemed to be going against Ju Wenjun. It was her second loss in four games, with it already a distant memory that she had taken the lead before that. The match had moved to Vladivostok, Russia and there were only four games to go. 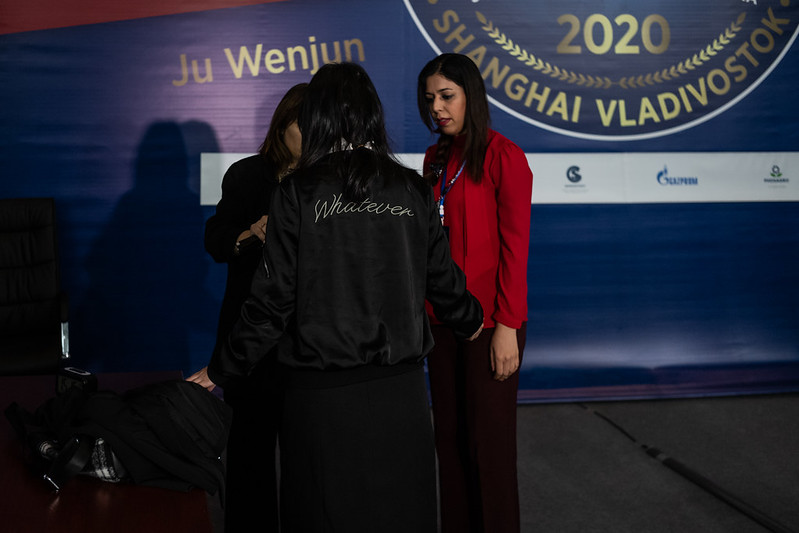 "Whatever!" in some ways summed up the opening phases of Game 9 | photo: Michael Friedman, official website

The Chinese player knew she had to do something, so gone were her 1.e4s and 1.d4s and she went for the offbeat 1.Nf3 d5 2.b3 instead, an approach that already saw Aleksandra thinking for over 5 minutes before replying 2…c5. Ju Wenjun took serious liberties after that and was soon worse, but it became clear that it wasn’t going to be a day of smooth chess by either player:

Goryachkina would later say that she felt 12…d4?! was a weak move as she played it, but although White was suddenly better again Ju Wenjun would return the favour by going for a strange plan of her own:

40…Nd6! would have given Black decent chances of survival, but after Goryachkina’s 40…Ke8 41.Ka5! the move 41…Nd6 came too late to hold the position together - a fantastic fight that saw the scores level again.

That was a huge blow to Aleksandra Goryachkina, who later joined Sergey Shipov on the Russian broadcast, though not, as it turned out, by her consent. She began:

To be honest, I’m not prepared to comment on the game because it’s the first time after losing I’m coming to commentate on a game – I consider it barbaric, simply.

That set off a heated debate, with Shipov supporting Goryachkina while FIDE Director General Emil Sutovsky came out strongly against. 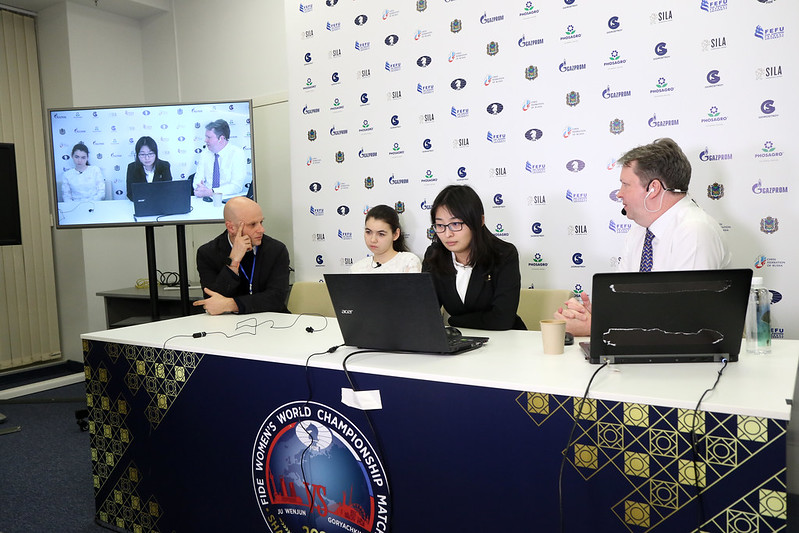 Aleksandra Goryachkina would be back and less than overjoyed for a joint press conference of the players after Game 10 | photo: Eteri Kublashvili, official website

It’s a familiar topic. Emil argued that to get sponsorship chess must be more like other sports where the losing players engage with the press regardless of the result, especially as it's a contractual obligation. It's a persuasive case, but counter-arguments include,

Having said all that, Goryachkina did then go through the game in some detail!

Game 10: Defence is the best form of attack 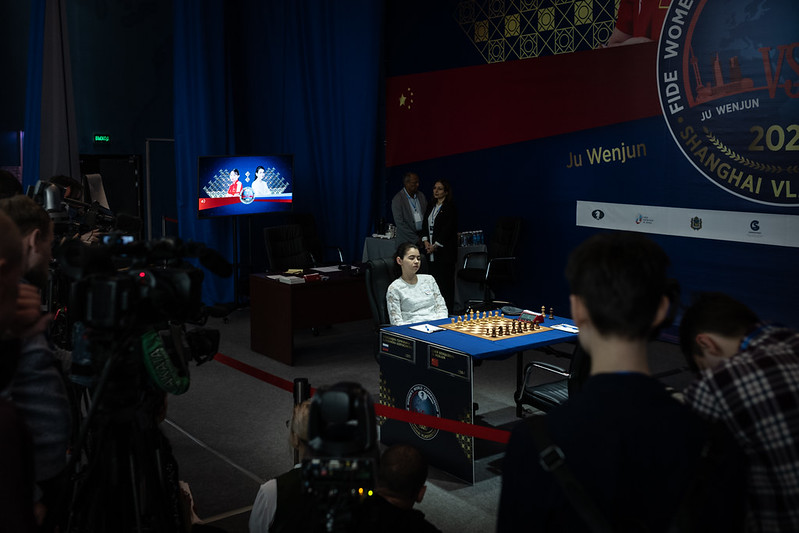 Getting in the mood before a crucial showdown | photo: Michael Friedman, official website

The way Game 10 went makes it seem unlikely that Goryachkina had managed to recover by the next day, but she was also perhaps unlucky to come up against a new idea that had crossed 11,000 km from Wijk aan Zee to Vladivostok in less than a day!

Erwin l’Ami’s 17…h5 in the Tata Steel Challengers looks spectacularly ugly, leaving the g6-bishop as a glorified pawn, but it proved to be a fortress Ganguly couldn’t break down despite the Stockfish evaluation remaining well over +1 until a draw was agreed on move 49.

Erwin is on Team Giri, and Anish felt the match moving from China, where Twitter is banned or at least hard to access, to Russia, might have influenced the course of women’s chess history:

On the other hand, Ju Wenjun spent 18 minutes on 18…h5 (in very slightly different circumstances), and Goryachkina could reasonably hope to press at no risk for as long as she wanted. 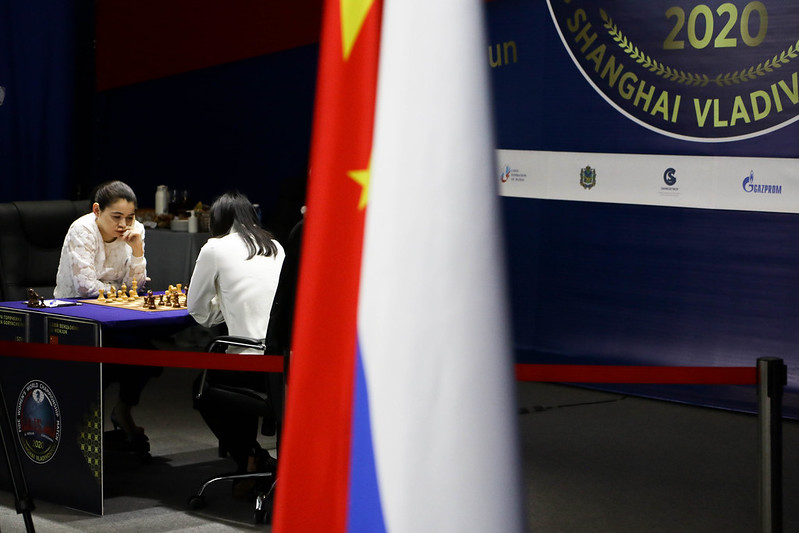 She said afterwards that she felt she had everything under control until 42…Be6!, which she’d missed:

When bishops were exchanged the rook ending suddenly became unpleasant for White, but Aleksandra could still have escaped with a draw until move 53:

53.Kb2! and White should still hold, but 53.Kb4?? was a move that was hard to explain except by the match situation. After 53…Rb3+ 54.Ka4 the white king was cut off and there was no stopping the c-pawn. Ju Wenjun once again showed flawless technique as she converted her advantage into a hugely important point:

That means the pendulum has swung again in Ju Wenjun’s favour in the match, and a win with White in Game 11 would secure victory with a game to spare.

On the other hand, both players have shown they can come back on demand and you certainly wouldn’t bet against another twist or two before this saga is over! Follow all the action live here on chess24 from 06:30 CET on Wednesday.