Ju Wenjun’s reign as the 17th Women’s World Chess Champion continues after she beat Aleksandra Goryachkina 2.5:1.5 in tiebreaks in Vladivostok. Goryachkina’s best chance came in the first rapid game when she was completely winning but let things slip in time trouble. In the end a single win with the white pieces in Game 3 was enough for Ju Wenjun to take home the winner’s 275,000 euros just in time for the Chinese New Year. 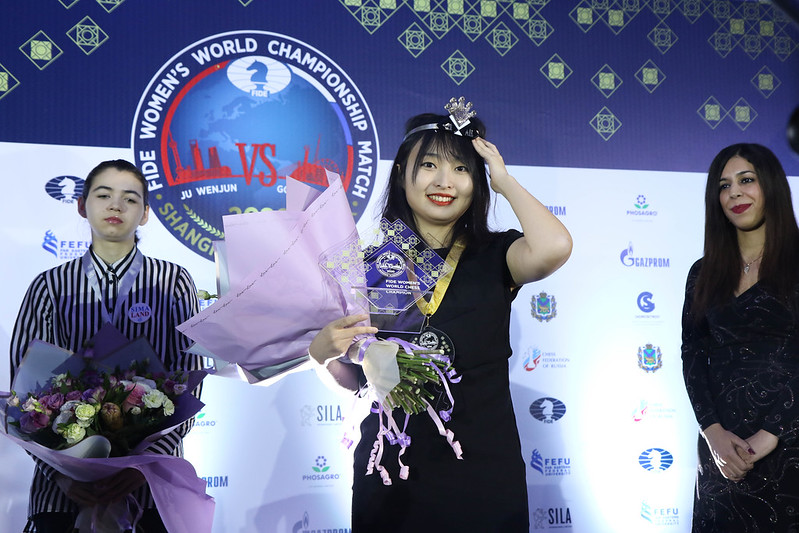 One photo that sums up the emotions of Aleksandra Goryachkina and Ju Wenjun, and also the sub-plot of Chief Arbiter Shohreh Bayat choosing not to wear her hijab or return to Iran | photo: Michael Friedman/Eteri Kublashvili, official website

The trend of reigning World Champions tying 6:6 in classical chess and then winning on tiebreaks continued in Vladivostok on Friday, as Ju Wenjun followed in the footsteps of Vishy Anand in 2012 and Magnus Carlsen in both 2016 and 2018 to beat Aleksandra Goryachkina. As in all those previous matches, the contest was decided in the first four 25 minute + 10 second increment rapid games, so we’re going to have to wait to see what it’s like for the players to continue with five pairs of blitz games and then play Armageddon for the title at some point around midnight!

You can replay the live commentary from Eteri Kublashvili and Nigel Short below:

And you can replay all the games from the match here. 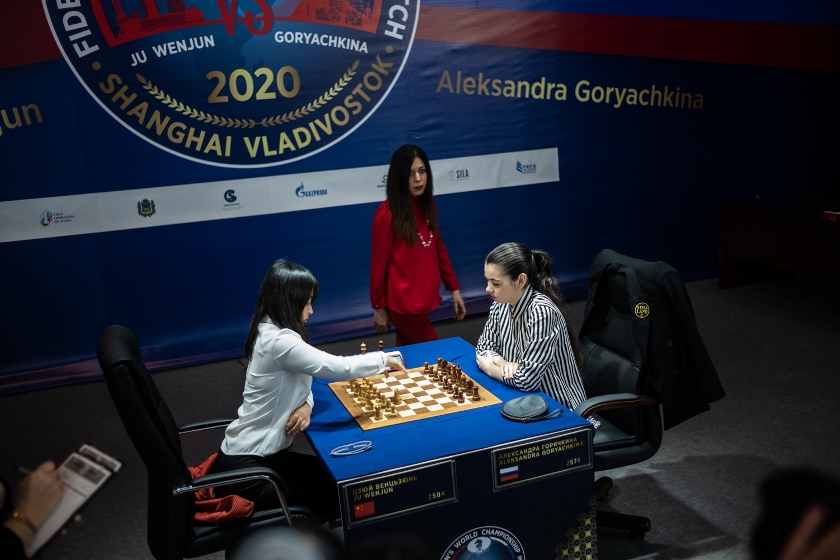 The tiebreaks were just as exciting as the preceding games | photo: Michael Friedman, official website

Ju Wenjun was taken to tiebreaks after Goryachkina won on demand in the final classical game, but the Chinese player said after the match was over that it hadn’t been such a hard blow:

After yesterday’s losing in the tiebreak I was kind of normal, because I’m also confident about my rapid - I had good results against her in rapid and blitz.

Ju Wenjun won the 2018 World Rapid Championship a point ahead of Goryachkina, who she beat in that event, and also retained her title in the 2018 knockout Women’s World Championship after beating Kateryna Lagno in both 10-minute games. Having said all that, however, she got off to a rocky start with the white pieces in Vladivostok. She misplayed what looked like a good position out of the opening and ended up, in her own words, “completely losing”:

It was perfectly understandable, therefore, that Aleksandra allowed a queen exchange with 41…Bd6 42.Rxe8+ Rxe8 43.Qxd5, and soon the ending was also clearly winning. At slower time controls the Russian would no doubt have proven it, but Ju Wenjun seized her chance to get counterplay:

49.d5! was the start of an unlikely but in the end triumphant march of the d-pawn, which cost Goryachkina a bishop. She was able to push at the end with three pawns for a knight, but once again in the match Ju demonstrated excellent endgame technique. 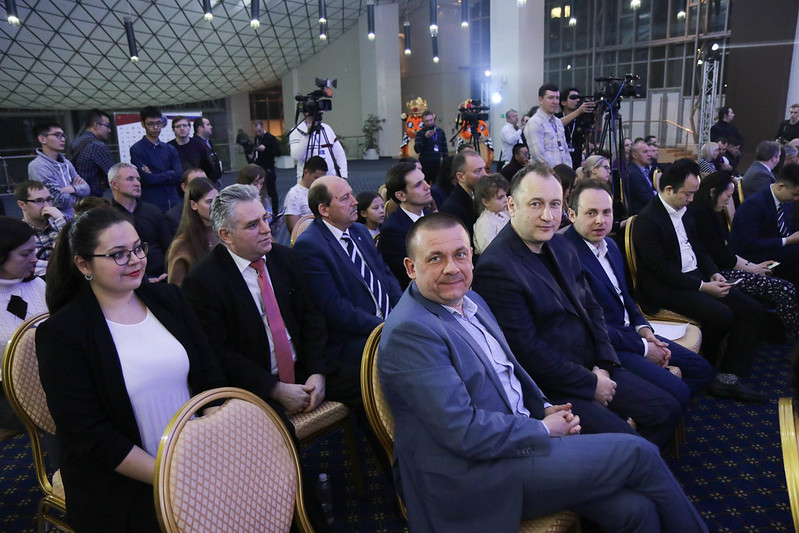 Game 2 revolved around Goryachkina’s passed d-pawn on d6 and whether it was a strength or a weakness. On balance it was more the former, but Ju defended well and ultimately held a rook ending a pawn down with little difficulty.

The match was ultimately decided by Game 3, where Ju showed she’d been able to repair (or remember!) her repertoire as the tiebreaks went on:

In Game 1 Ju played 10.Bxf3, but now she picked the much more enterprising 10.exf3!?, with the e-file later a key factor in some powerful play by the Chinese star. She was already playing with an extra pawn when she moved in for the kill:

That was a game worthy of winning a World Championship match, but once again we had the same situation as in the classical section of the match – one game remaining, where Goryachkina had to win at all costs with the white pieces. 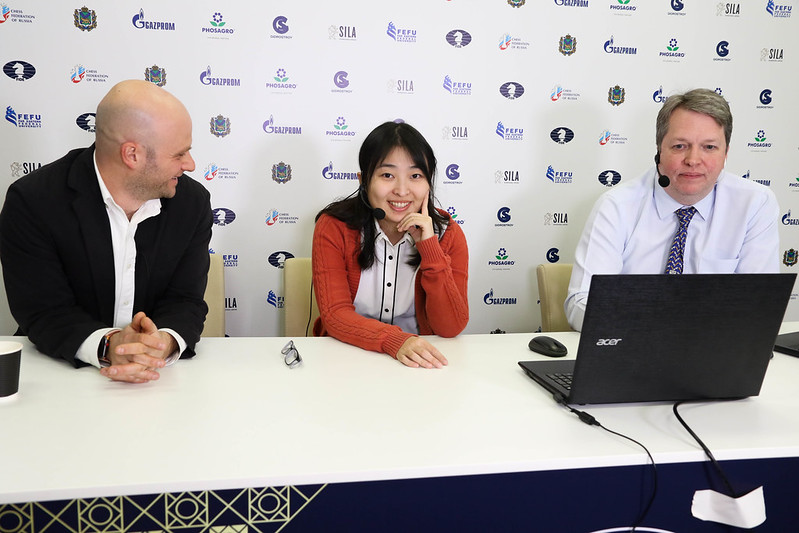 There were no opening shocks to compare to 1.d4 d5 2.Nc3!? in the last classical game, but Goryachkina’s team did manage to get in some dangerous prep with 11.0-0!?:

At first Nigel Short thought it was just a blunder, but Aleksandra had clearly prepared the pawn sacrifice 11…Nxd4 12.e5!, which she blitzed out instantly. Ju afterwards commented of her opponent’s 11th move, “I think it is a good move in rapid because it [puts] me in a totally strange position”. In the game Ju came up with a move that was both bad and good – bad because 12…f5!? seemed to immediately give White a healthy edge, but good because it also got Aleksandra thinking for herself at the board.

After that Ju Wenjun gradually equalised only to go astray in swapping off queens, though that was the most understandable decision in the world in a game that you only needed to draw. Perhaps the last twist, however, came on move 25, when Goryachkina could have played 25.Rcc7! but instead went for the curious 25.Rb3!?

…but in any case, Ju Wenjun also agreed afterwards that the rook belonged on the 7th rank. She said the resulting positions would have been “ugly and I think White had good chances”.

In the game Ju Wenjun went on to defend so well that she was the one with any winning chances by the end, and on move 77 the game ended in a repetition:

An incredibly hard-fought match in which the players averaged 65 moves a game had therefore ended with 28-year-old Ju Wenjun holding on to the title she won against Tan Zhongyi in a match in 2018 and then defended the same year in a 64-player knockout tournament. The 17th World Chess Champion will now hold on to the title at least until late 2021 or early 2022, when she’ll face her next challenger in a match.

Ju Wenjun is the 17th World Chess Champion, and though her reign has been short she's had to defend her title twice already | source: Wikipedia

That challenger could easily be 21-year-old Goryachkina, who came incredibly close to the title and impressed not just with her preparation but her determination and ability to play well under extreme pressure. Ju commented:

She’s very young and I think she’s one of the strongest players in the world, and also her play is very positional.

2020 could yet be the year of Anish Giri or Alexander Grischuk, but for now Ju Wenjun ends the Year of the Pig and goes into tomorrow's Year of the Rat as the Women’s World Champion and the strongest female player in the world... at least until her compatriot Hou Yifan can be tempted back to the board. 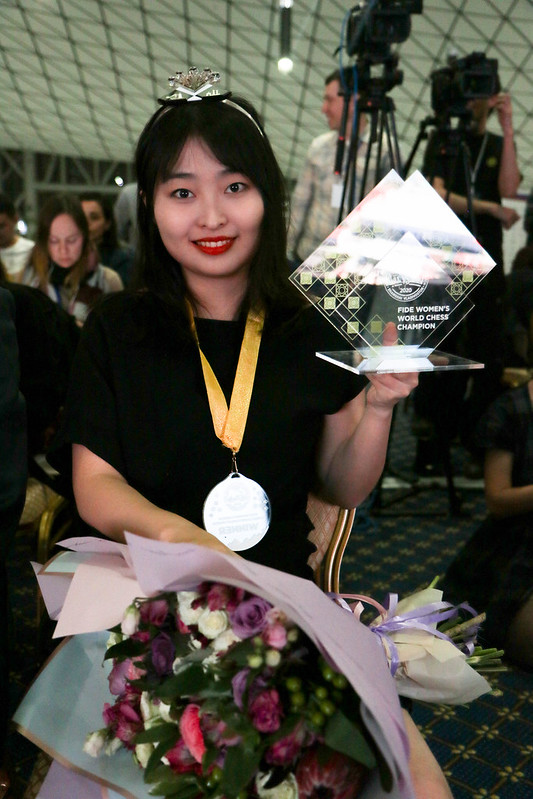