Women’s no. 2 Ju Wenjun now leads 2.5:0.5 in the Women’s World Championship match in Shanghai after winning Games 2 and 3. In the second game Tan Zhongyi was surprised in the opening and went astray in the middlegame before being given a second chance. She failed to take it in time trouble, though, and then in Game 3 things went from bad to worse. She was essentially lost on move 14 and the match is now in danger of being all but over before it switches to her home city of Chongqing. 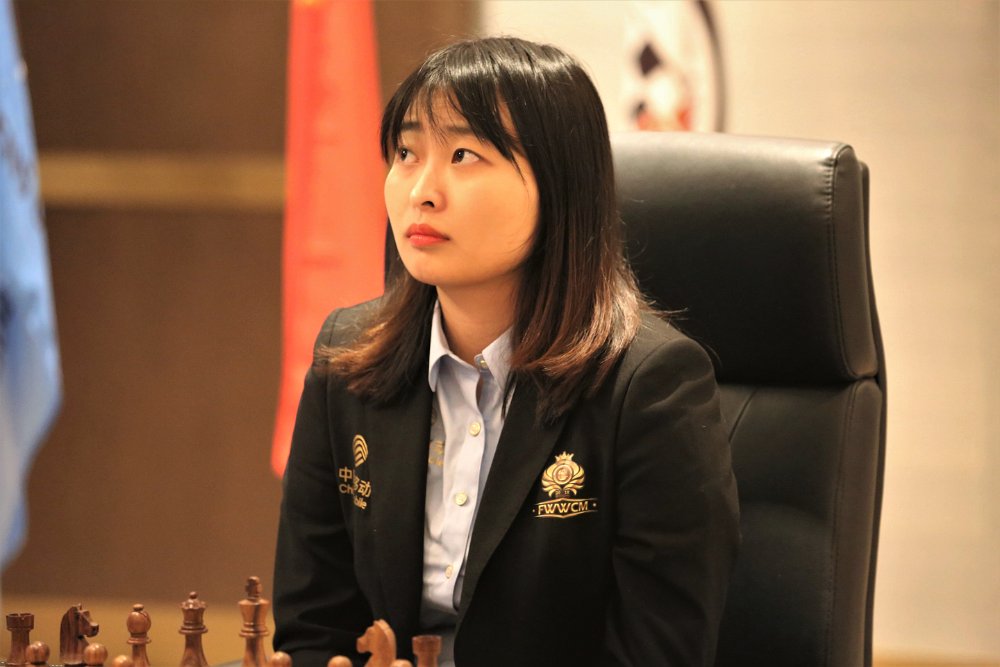 Replay all the games from the 2018 Women’s World Championship by clicking on a result below:

Game 2: Who surprised who?

Tan Zhongyi had surprised Ju Wenjun on move 2 of the first game and tried to pull off a similar trick in Game 2 by choosing 1.c4 instead of her regular 1.d4. Her opponent was of course ready, though, and varied from the lines she’d played in all but one of her own games with 1…e5 2.Nc3 Bb4, when Tan shockingly confessed afterwards to being entirely on her own. Not an ideal situation for a World Championship match! 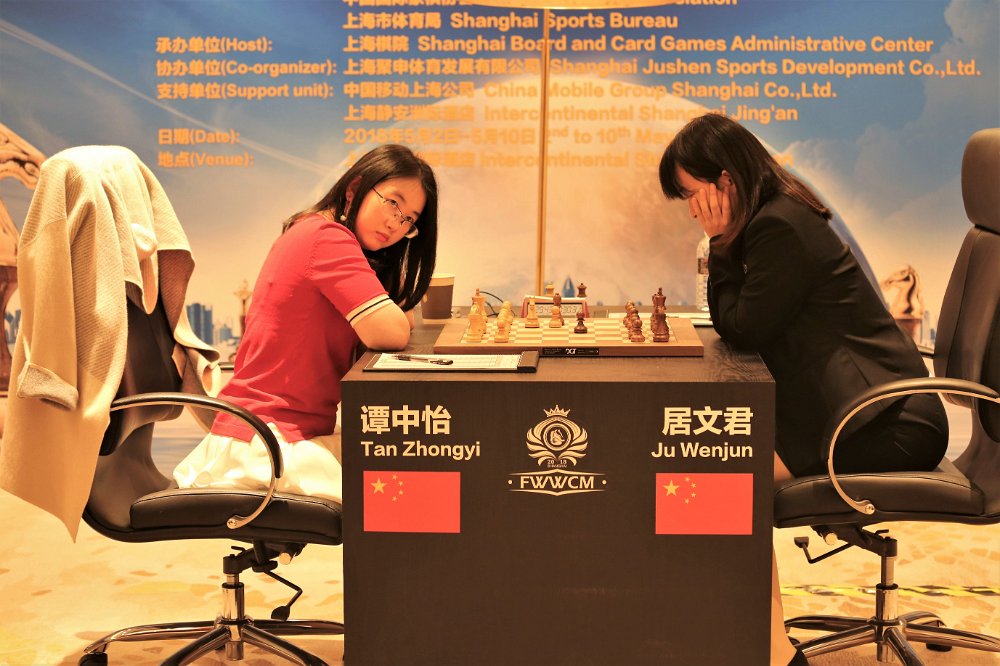 Tan Zhongyi found herself immediately on the back foot despite having the white pieces | photo: Gu Xiaobing, official website

That unfamiliarity with the position was reflected in her hesitant play. She perhaps then overcompensated by confidently going for a line with 20.Rfd1 that she only realised too late would bring her to the edge of the abyss:

Tan Zhongyi quickly played her planned 22.Rf1? (22.Rb2! or 22.Qb2 are essential and probably enough to draw) and only realised after 22…Raf8 23.c5 Kh7! that she suddenly needed to jettison material to avoid losing on the spot. After 24.Qd1 Qxa2 it looked as though Ju Wenjun would go on to convert the extra passed pawn on the queenside with ease, but the women’s no. 2 played inaccurately in time trouble and gave her opponent a lifeline:

39.Rc6! and, with some care, White should hold – Black will struggle to push her passed pawns without allowing the white rooks to attack the black king. Instead after 39.f5? gxf5 40.exf5 d3! the players had made the time control and White could all but resign. You don’t resign early in a World Championship match, though, and Zhongyi at least got to demonstrate an amusing final trick with 52.Kf3: 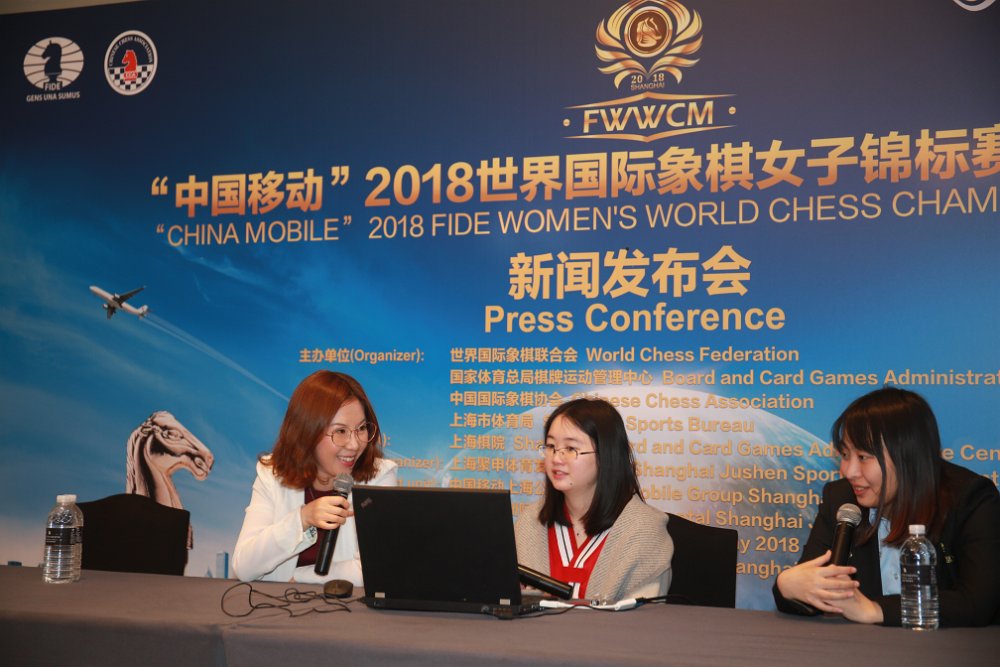 The players’ demeanour in the post-game press conference surprised one observer (check out Ian Rogers' report for the US Chess Federation here):

There was a rest day to recover, and Tan Zhongyi commented, “I believe nobody feels happy when they lose, but I am good at working under pressure.” 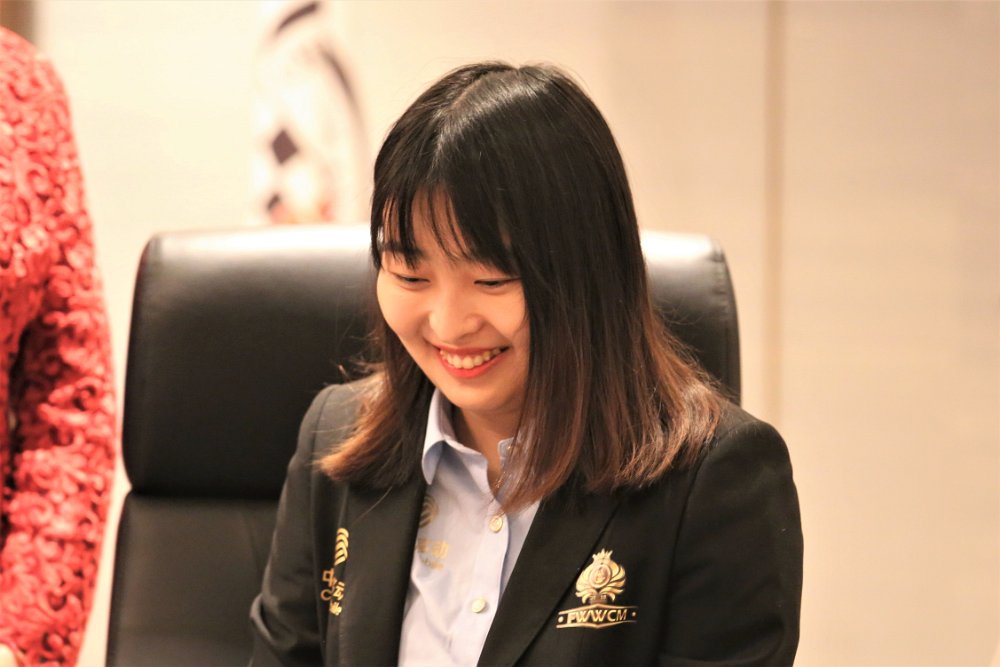 Ju Wenjun would have plenty of reason to smile after the game as well | photo: Gu Xiaobing, official website

In Game 3 Tan Zhongyi returned to her familiar Queen’s Gambit Declined, and up to move 12 she should have felt at home:

She actually won from this position against Ju Wenjun in 2013, and had chosen the move others did as well - 12…Qc8. That looks strange, but it both gets the queen out of the path of the white rook (making Nxe5 a potential threat) and protects the b7-rook. We saw why that was important after Tan took a 7-minute think before producing the novelty 12…Be7!?, when 13.Qe4! hit the rook. 13…Qc8 14.Qg4 led to the critical position:

This was where Tan Zhongyi’s hopes of retaining her World Championship title may have suffered a fatal blow. Her options are all awkward, but 14…Bf8, 14…Rg8 or 14…g6, the move expected by her opponent, would all have left the game in the balance. 15.Bh6 after that last move looks extremely ugly for Black, but that was nothing compared to what happened in the game. Tan thought for 18 minutes before producing the disastrous 14…g5?? After 15.Bxg5 Rg8 Black might have had some chances, but sidestepping with 15.Qh5! was essentially the winning move. Black's position is in ruins.

I knew this variation, but somehow could not remember clearly during the game, and this structure is not something I am familiar with. People make mistakes in things they are not good at. I shouldn’t make a serious mistake like 14…g5?. I neglected a simple plan like 15.Qh5 and Ne4 for White, due to both technical and mental reasons.

After 15…Nc5 16.Bxg5 Ju felt she was already winning. In fact it turned into a question of how long Tan would manage to extend the game. 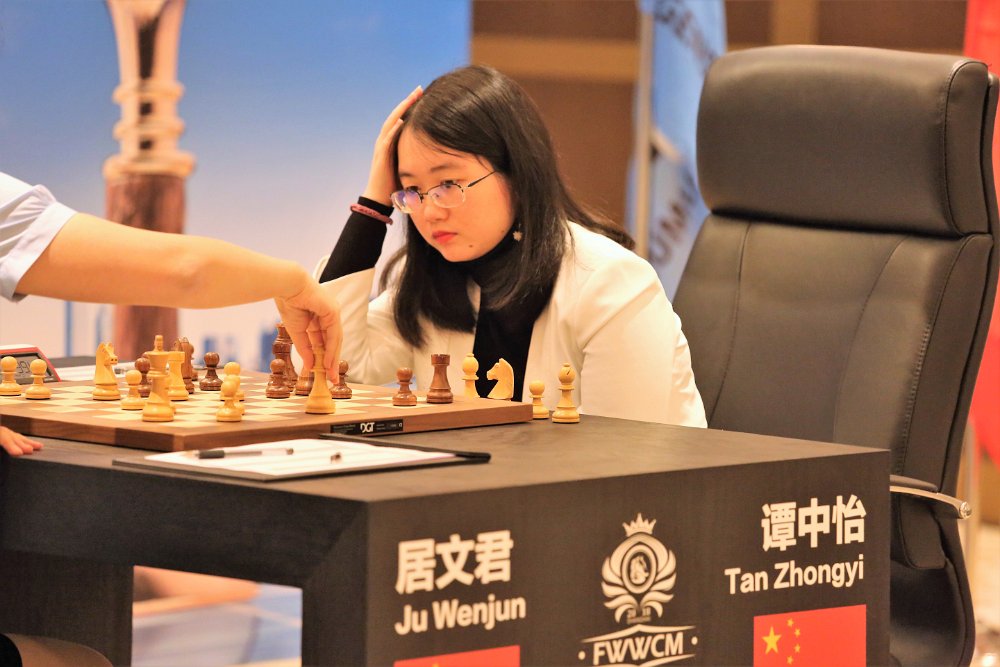 It looked like she might stretch it beyond strictly being a miniature, but then 26…Kd7 allowed a nice finish:

27.Qd4+! provoked resignation, though in other circumstances Tan Zhongyi might have let 27…Kxc6 28.Qd6# appear on the board.

That leaves her trailing by two points and needing to fight hard to avoid the 10-game match being almost over by the time it switches to her home city of Chongqing after Game 5:

Comebacks were Tan Zhongyi’s speciality when she won the Women’s World Championship knockout last year, though, so Ju Wenjun can’t relax just yet! Tan Zhongyi will now have White both in Monday’s Game 4, and in Game 5 on Wednesday (not alternating colours after Game 4 is a means of lessening the advantage of receiving White in Game 1). Follow all the action here on chess24 from 09:30 CEST.