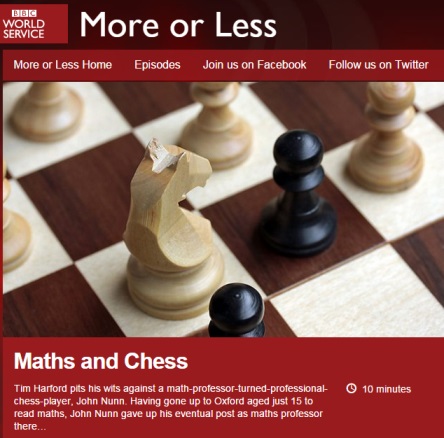 Magnus Carlsen once claimed John Nunn was too smart to become World Champion. The English Grandmaster was the youngest Oxford University undergraduate in four centuries when he went there at the age of 15 to study maths, before eventually giving up a lecturing post to become a full-time chess professional. In an interview with Tim Harford for BBC radio he talks about how chess relates to maths, the influence of computers and what enabled Emanuel Lasker to spend 27 years as World Champion.

Former Top 10 player John Nunn was talking to Tim Harford for the BBC Radio show More or Less, with Harford wondering whether the fact that World Champion Emanuel Lasker – the model player in the book John Nunn’s Chess Course – was also a mathematician, proves that chess and maths are linked.

You can replay the show on the BBC website, and also read an almost full transcript below. We've excluded only the introduction and a few comments on a game of chess played while they talked (check out Dominic Lawson’s brilliant Magnus Carlsen interview for another example of this BBC speciality).

Tim Harford: Can you use maths to win on the chessboard?

It’s a case of correlation, not causation, then, so good mathematicians are the kind of people who might like to play chess, but it doesn’t necessarily mean that maths will help you on the chessboard?

I think that chess is something that’s worth studying for its own sake, particularly for school kids. You learn all kinds of things playing chess: not to make hasty decisions, not to be impulsive and to think about the consequences of things that you’re going to do, but I don’t think there’s a specific connection with mathematics.

I think it’s because these subjects are self-contained as they don’t connect with other parts of the real world. So, for example, you wouldn’t expect to get a great child novelist because to create believable and interesting characters in a novel requires an understanding of people and knowledge of how the world operates, whereas in mathematics and chess you’ve got subjects which have their own internal rules, which don’t relate to rules in other parts of knowledge. So because they’re self-contained formal systems you can become an expert in them without having this experience of life that becoming an expert in other disciplines requires.

Now I have to confront you with this interview from five years ago with the World Champion Magnus Carlsen, who told Der Spiegel, the German news magazine, that, “I’m convinced that the reason the Englishman John Nunn never became World Champion is that he’s too clever for that”. What did he mean? 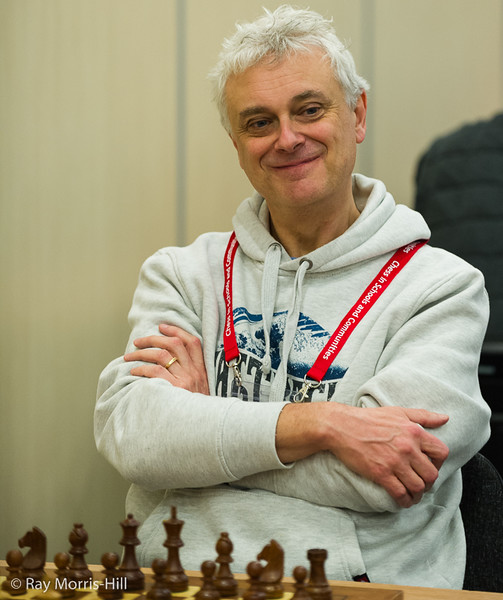 John Nunn, who turns 60 later this month, during the Super Rapidplay tournament of the 2014 London Chess Classic | photo: Ray Morris-Hill

I think what he meant, and a bit later in the interview he did explain it, was that I was interested in too many different things and didn’t focus sufficiently on chess in order to reach what he apparently conceives to be my maximum potential, although I should say I was at one stage in the World Top 10, which is not that bad.

Do you think the situation has changed, though, because computers must have changed the relationship between human analysis and chess mastery?

I think computers have had a huge impact on the game, particularly at the highest level. Decades ago, when I was at my peak, computers were laughably weak and they were of no assistance whatsoever in analysing openings or checking on your moves, but that’s completely changed now. Even the software that runs on phones is now stronger than the human World Champion, so you’ve got an oracle there that can tell you whether a particular move is good or bad – not in every single case but in the vast majority of cases. So all the top players work extensively with computers and check all the moves they’re intending to play with the computer to see if there’s some kind of refutation of them. In fact Magnus Carlsen, the current World Champion, told me that he doesn’t actually have a chess set at home. He does everything on the computer screen.

Do you think computers have spoiled things a bit?

They’ve changed things enormously, but spoiled? That I wouldn’t really say. Certainly the chess world is completely different now because of computers, and one really negative consequence has been the possibility of cheating in chess. People can go into the bathroom and analyse the position on their pocket phone, so steps have to be taken to try and prevent that kind of thing. But otherwise, it’s just a change. In a way it helps because, for example, people can watch games on the internet now from tournaments all over the world live and, with the computer backing them up, they can have an evaluation of the position so they know what’s going on. It’s like having a continuous commentary – expert commentary – on the game. So from the point of view of chess publicity and the general chess public computers have in fact helped quite a lot.

What then about Lasker? Have I just got the wrong end of the stick that he used his logic to figure out chess positions? Were things different back then? 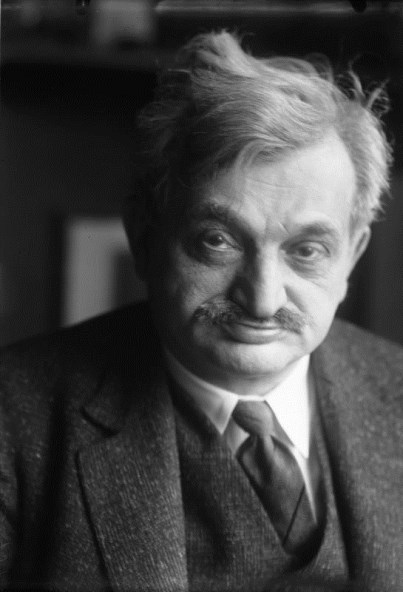 Things were different back then, but it was the same game, it was the same chess that we play today. I think Lasker’s main strength, and what distinguished him from the other players of his generation, was his excellent psychology. He knew precisely which moves would discomfort his opponent and, without taking excessive risks, he would cause situations to arise on the board in which his opponents were likely to make a mistake. This doesn’t necessarily mean that he was making deliberately bad moves, but he knew how to induce mistakes.

So out of two good moves he could pick the one that would cause the most trouble?

Yes, the two moves might objectively be of the same strength and if you put them on the computer they would give the same evaluation, but one might be much more likely to cause an error by the opponent, and he would always go for that possibility.

So this is more a case of psychology, then, than mathematics?

It is. I don’t think, although he was a good mathematician, that that helped him so much in becoming World Champion. I think it was his understanding. He had a very deep understanding of chess and, in particular, he had the ability to create deceptive positions on the chessboard – ones in which his opponent, for example, looked as though he had the advantage, but in fact he didn’t.