Ian Nepomniachtchi will qualify for next year’s World Championship Candidates Tournament in place of Maxime Vachier-Lagrave if he goes on to win the final of the Jerusalem Grand Prix. MVL got all he could hope for in what was for him a must-win game, but one mistake left him with nothing better than to offer a draw and concede match defeat. Nepo’s opponent will be either Wei Yi or David Navara, whose match goes to tiebreaks on Thursday. 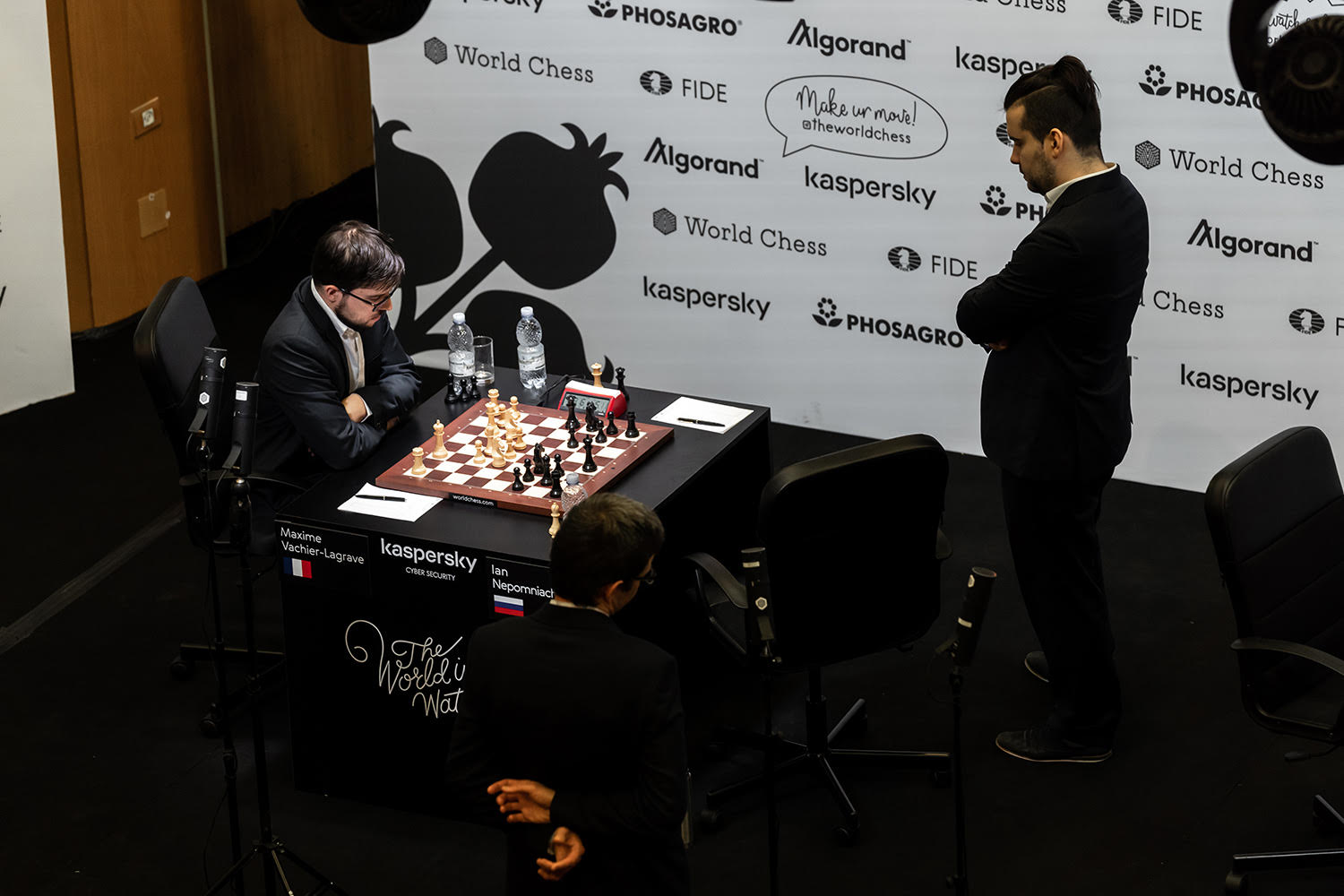 You can replay all the games from the Jerusalem Grand Prix using the selector below:

29-year-old Maxime Vachier-Lagrave has never played in the Candidates Tournament that selects the World Championship challenger, but no-one else has missed out in quite so many unfortunate ways. He missed qualification for the 2018 event after he lost in Armageddon to Levon Aronian in the World Cup semi-final and had the highest rating of anyone not qualifying by rating. He was the most obvious wild card if it was selected objectively, but the Russian organisers picked Vladimir Kramnik. 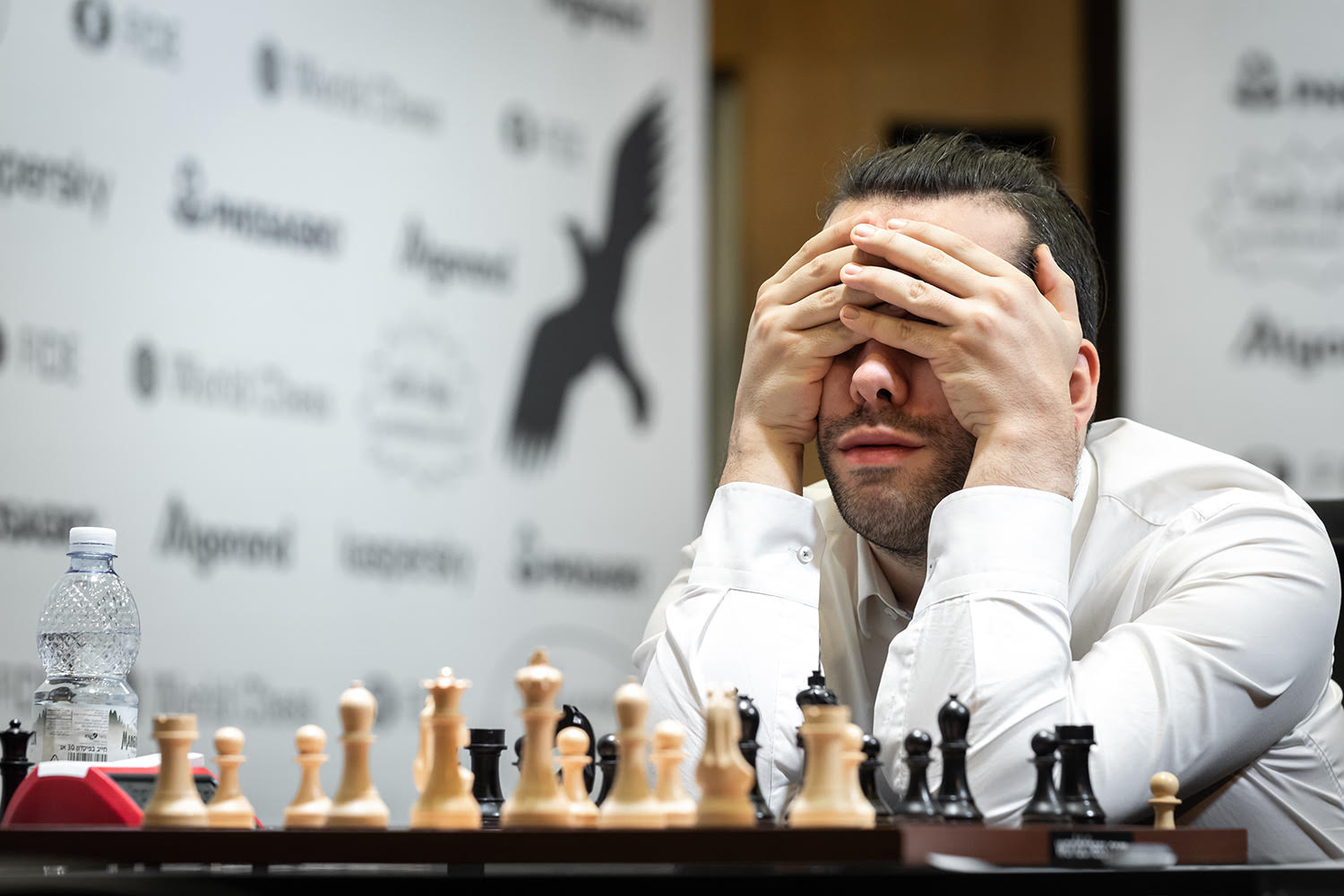 It was a game that wasn't without its scary moments for Nepomniachtchi | photo: Niki Riga, official website

This time round Maxime again lost out in the semi-final of the World Cup, to Teimour Radjabov, and was again the highest rated player not to qualify by rating. It now looks likely that finishing 3rd in the FIDE Grand Prix series will mean he’s met this year’s strict wild card eligibility requirements in three separate ways, but despite being clearly the “most-deserving” of a wild card he again seems to have no chance since the Russian organisers are saving that spot for a Russian player.

Of course Maxime is the last person who wants to be relying on charity, and he did everything he could to take his semi-final match against Ian Nepomniachtchi in Jerusalem to tiebreaks. He played the 3.h4 line against the Grünfeld that had soared in popularity since Alexander Grischuk played it against Maxime in the Riga Grand Prix.


When I saw this move for the first time I thought, 'how can you play like this?'. But then Alexander Grischuk beat me in blitz with this line. I was analyzing it in the summer, but I could not remember my analysis.

It was only with 7.g4 that the game varied from a Grischuk-Nepomniachtchi rapid game during the Levitov Chess Week (Grischuk thought 5 minutes over 7.dxe6 and went on to lose).

After 7…Nf6 8.dxe6 Bxe6 9.e4 Bxg4 10.f3 Maxime had jettisoned the g-pawn for a huge pawn centre and what soon became real chances of getting the win he needed. 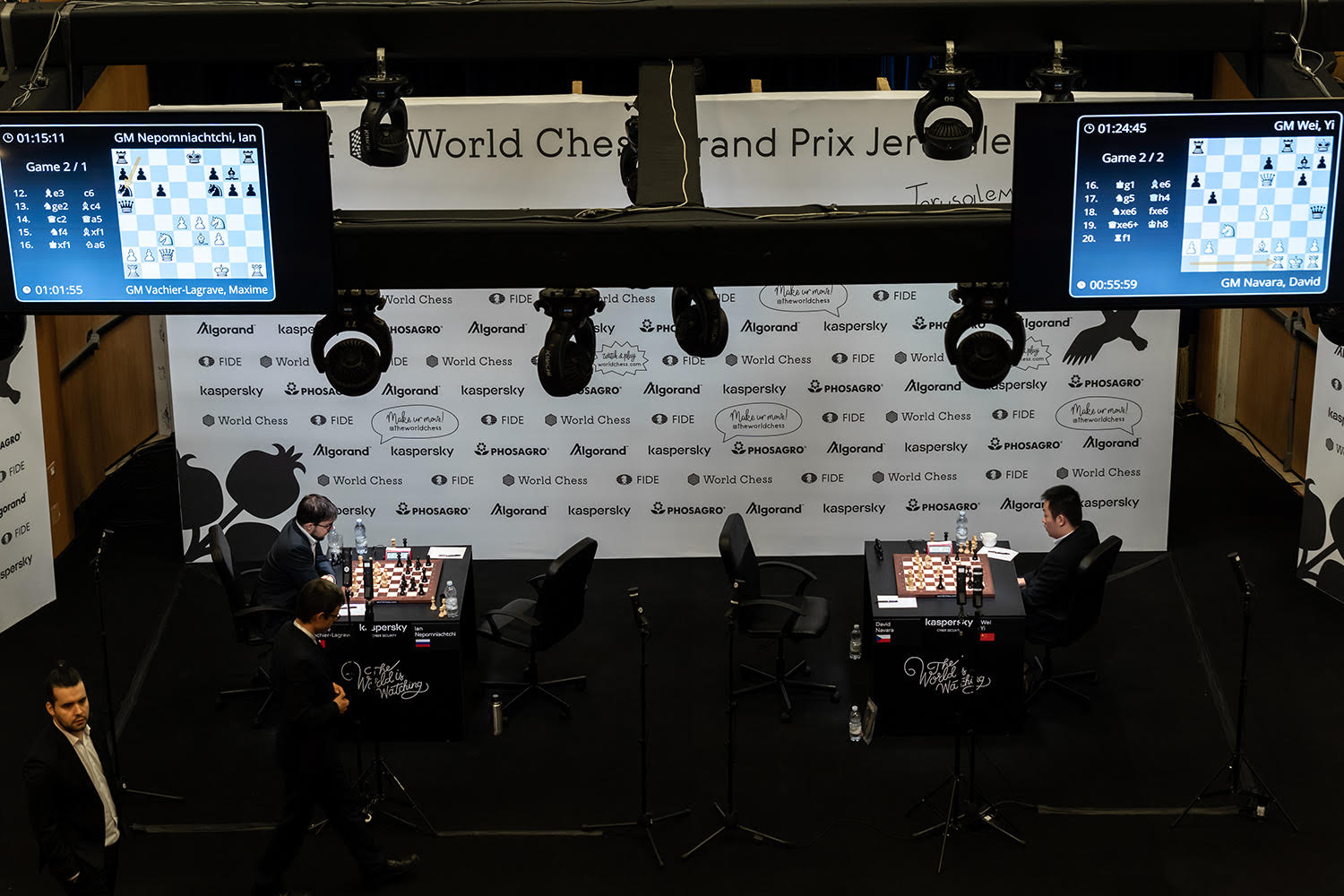 For a while Maxime's chances of levelling the score looked excellent | photo: Niki Riga, official website

Ultimately, however, the game turned on one fateful decision. Instead of playing 25.Nd3!, with the plan of 26.Nc5 next, Maxime went for 25.Ng3?

The unfortunate position of the knight allowed Nepo to solve all his problems with the 25…f5! break. It was a case of Maxime having miscalculated a sharp line:

In a must-win situation you might have expected Maxime to fight on anyway, but there was little arguing with his assessment of the situation:

I decided to offer a draw in the end because I am really worse there and there is nothing to hope for anymore.

So although for now Maxime still leads Nepomniachtchi in the Grand Prix standings with 16 points to 15 he’ll be overtaken if Ian goes on to win the final. It’s a potentially bitter end to a marathon for Maxime:

For the last 7 months I played chess for at least 3 months, I was traveling for another month, and one more month I spent resting but also away from home. It has been a huge challenge for me! There was nothing I could do about it, since the schedule for both Grand Prix and Grand Chess Tour had been fixed.

Maxime has been here before. After losing to Levon in the 2017 World Cup semifinal (this was before he also missed out in the final Grand Prix that year):

And after the match defeat against Nepo: 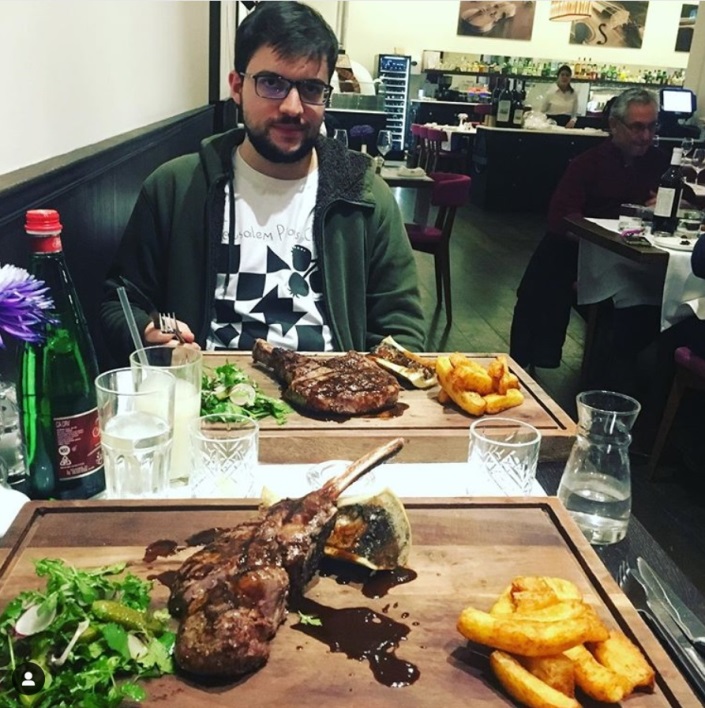 I will be watching the match from home and of course I will be rooting against Ian - there is nothing else I can do. But if Ian wins, it will be well deserved.

Fellow 29-year-old Ian Nepomniachtchi’s chances of qualifying for his own first Candidates Tournament are excellent since he also has a backup plan – if he loses the final he’ll get to play a match against Kirill Alekseenko for the Russian wild card spot. But he will, of course, be hoping it doesn’t come to that.

We still don’t know Nepo’s opponent in the final since the second semi-final remains too close to call. After playing to bare kings in the first game they came one (technically illegal) move away from that in the second after a 5.Qb3 Grünfeld where Wei Yi played the more common 7…a6 rather than the 7…Nc6 that had gotten MVL into trouble against Nepomniachtchi the day before. The rare 10…Nbd7 sent Navara into a 14-minute think, while Wei Yi didn’t pause before going for a piece sacrifice after 11.Be3 Ng4 12.c6:

Volkov’s 17.Qc2 was one of the two playable options here, though a few moves later he blundered into a mating attack. 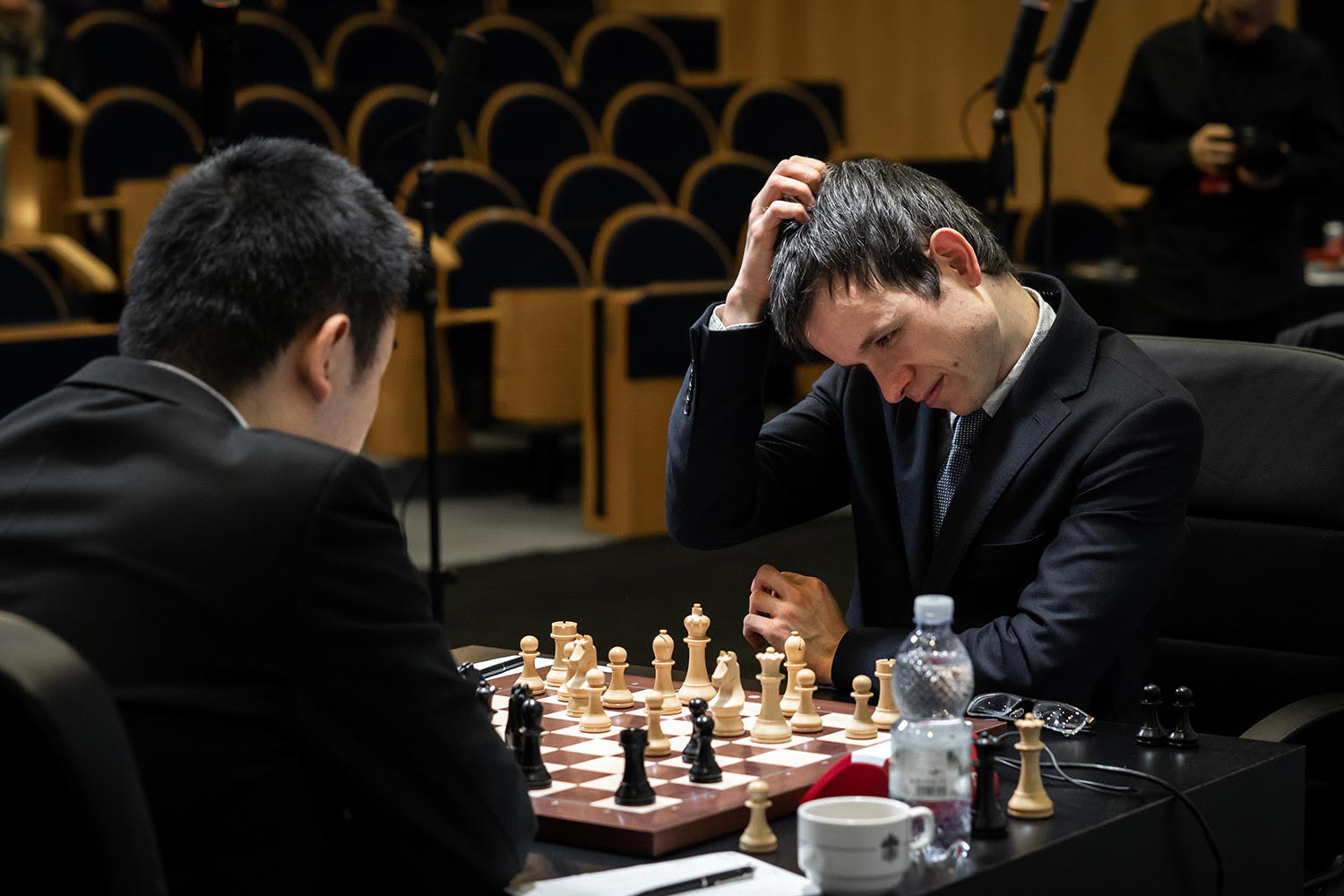 Wei Yi and David Navara will both represent a serious threat to Ian in the final | photo: Niki Riga, official website

20…Rf4! was the product of 33 minutes’ thought. White is forced into 21.h3! to prevent mate, and Black had time to bring the other rook to f8, capture on c3 and take with the rook on e4 to win back a piece in the form of the bishop on e2. Wei Yi emerged a pawn up in a rook ending, but it wasn’t enough to win what had been an excellently played game by both sides.

That means we have tiebreaks on Thursday before Friday is the event’s one rest day, meaning Ian Nepomniachtchi will have a couple of days to recover before playing arguably the most important match of his career to date. Tune in to the tiebreak action live here on chess24 from 14:00 CET.