Ian Nepomniachtchi has beaten Maxime Vachier-Lagrave in Game 1 of their Jerusalem Grand Prix semi-final, dealing a heavy blow to the French no. 1’s hopes of qualifying for the Candidates. Ian described the surprise he sprung on move 8 of a Grünfeld as “nothing serious”, but it was enough to knock Maxime completely off balance. In the other semi-final Wei Yi was knocked off balance on move 1, since he’d expected to have Black but was playing White! No great harm was done, as his game against David Navara ended drawn with bare kings on the board. 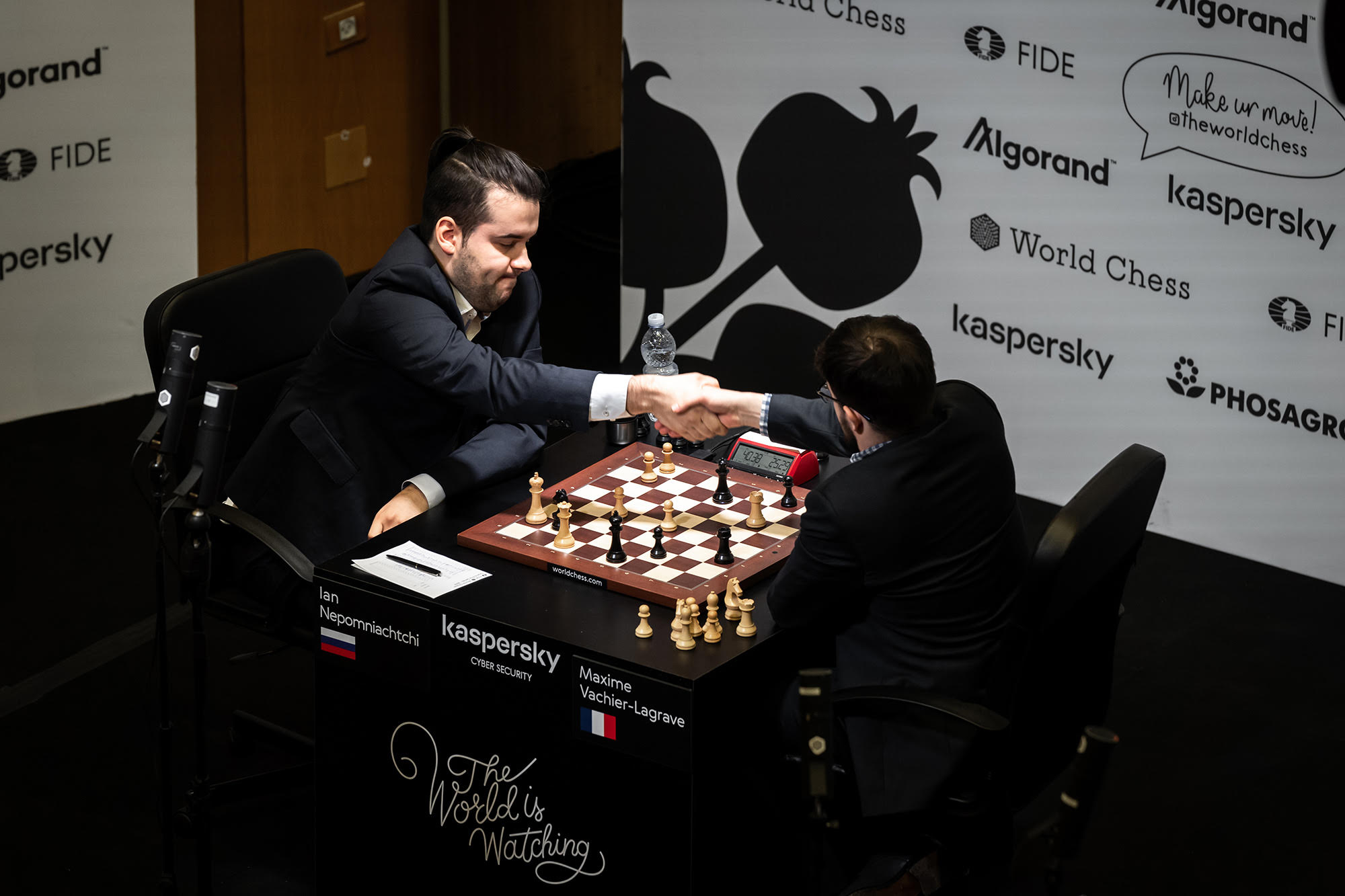 You can replay all the Jerusalem FIDE Grand Prix games using the selector below:

If Maxime Vachier-Lagrave has a weakness it’s that he has one of the narrowest opening repertoires of any top chess player. You can be pretty sure that given the chance he’ll play the Najdorf Sicilian against 1.e4 and the Grünfeld against 1.d4. That knowledge allows his rivals to plot ambushes, though more often than not they fail – Maxime knows “his” openings in enormous depth and has a wonderful feel for the dynamics even if he’s never seen a particular position before.

Sometimes, however, the ambush succeeds. Dmitry Andreikin managed to bamboozle the Frenchman on move 4 of the quarterfinal tiebreaks with a harmless looking move that prevented the Najdorf. MVL was soon losing, but survived the scare to go on and win the game and match. 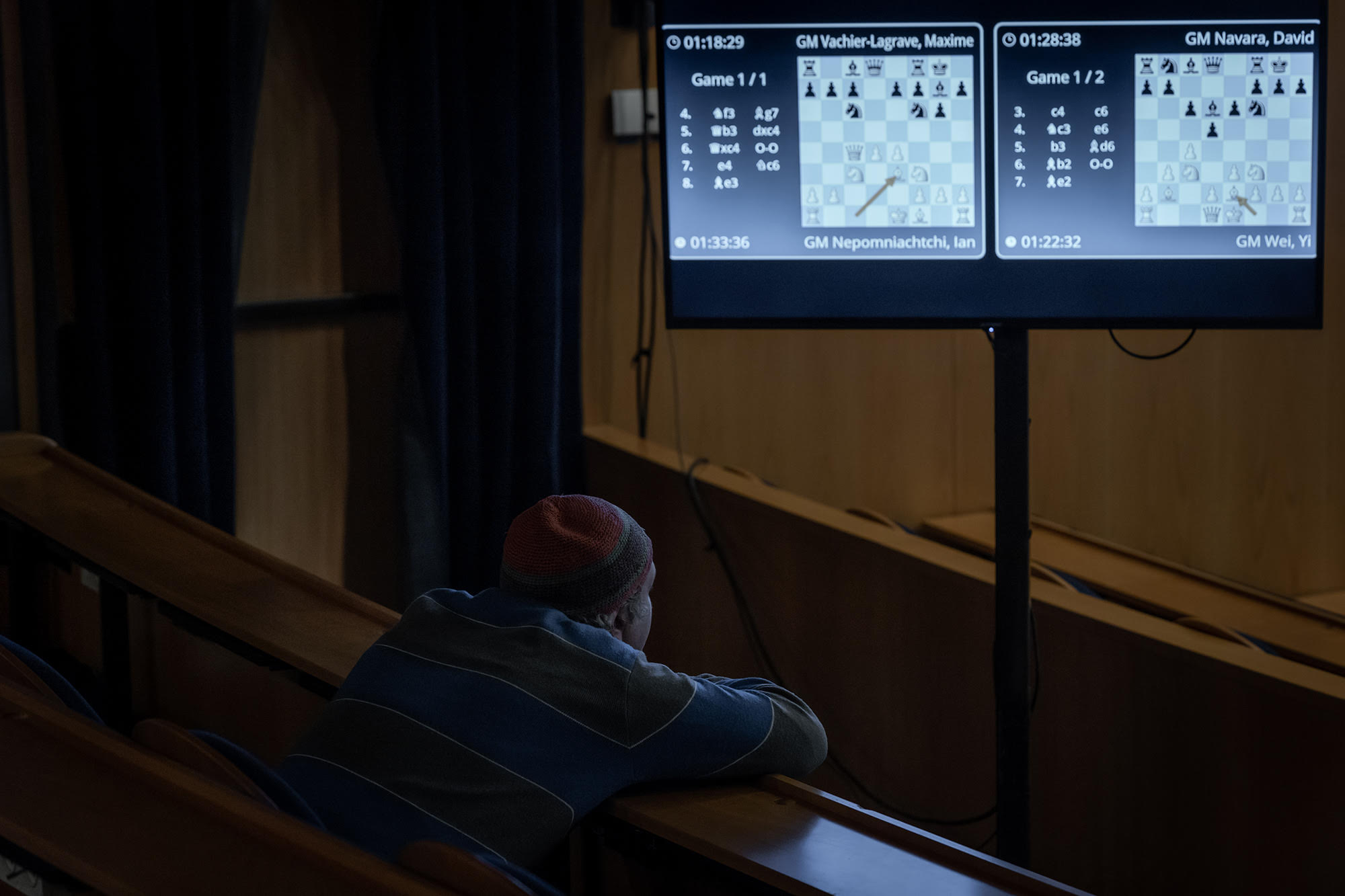 It was déjà vu in the semi-final when in a Qb3 Grünfeld another Russian, Ian Nepomniachtchi, came up with a move to block Maxime’s main plan in the position. He played 8.Be3!? instead of 8.Be2, later explaining:

8.Be3 is surely not the best move, but it’s not played too often these days, and I think it could be an interesting idea, especially if the opponent faces it for the first time. Basically the idea is to prevent 8…e5 9.d5 Nd4, so now we have a better edition. So normally you play 8.Be2 and then ok, it’s a draw. Maxime played 1000 games already in this line and he never loses, he only beats someone with the initiative, and also this line became very popular because of Maxime, basically, so that’s why I decided it’s likely he’ll play 7…Nc6 and ok, I came up with this Be3 move. Of course it’s nothing serious, but it worked out pretty well.

For a second day in a row Maxime confessed he had indeed been caught by surprise, and revealed that most of the 20 minutes he spent on 8…Ng4! had been devoted to the hyper-sharp position after 9.Bg5!?, where one line continues 9…Nxd4 10.Rd1 c5! 11.Qxc5 Ne6! Instead Maxime had to think again after the instant reply 9.e5!?, and what he opted for was a plan of exchanging off a couple of minor pieces before taking drastic action:

He chose an interesting way, but it’s strategically very dangerous, because I have this superior pawn centre. I believe Maxime played in a very creative way - this b5, b4 - finally he got some counterplay, but I believe that it was more or less under control.

Maxime had seen this when playing Qe8 and would probably have had enough play to draw after 24.Kxg2 Qc6+!, but what he’d overlooked was 24.Ne4! It turns out the black knight is going nowhere now that e3 is defended, while e4 is a staging post for the white knight on its way to f6. 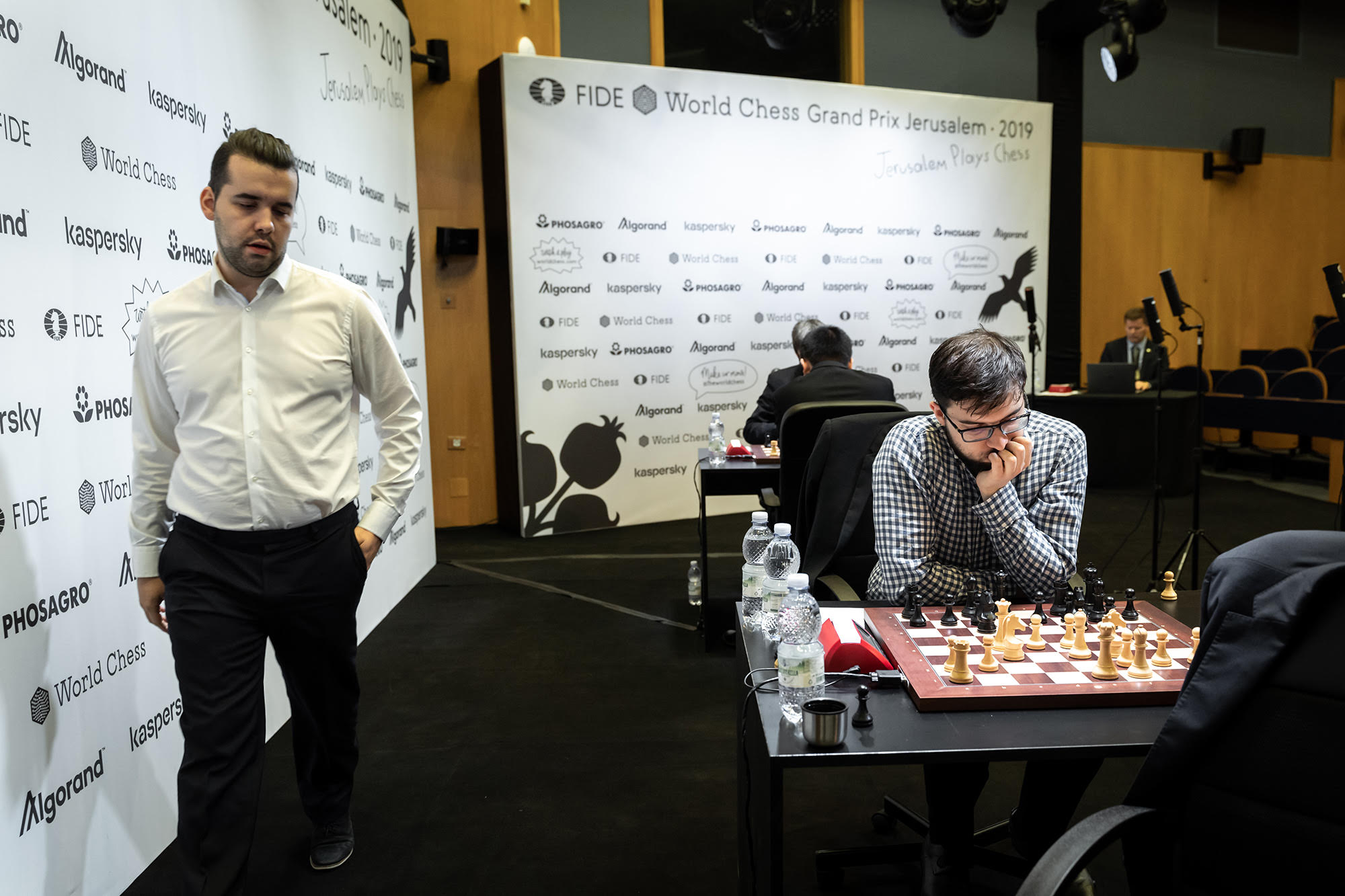 Maxime found his best option, 24…Rd8!, but called it “a good try, but not enough.” In what followed you could criticise some of Nepomniachtchi’s decisions and the speed with which he made them, but, on the other hand, his speed increased the pressure on Maxime and his “inaccuracies” still left him with a won position.

The finish was brutal:

35.Rxh5+! Kxh5 36.Qh3+ and, after a dozen moves en prise, the g2-knight will finally be captured, soon to be followed by the rook on f8. Instead Maxime simply resigned.

That means that Nepomniachtchi is now just a draw away from winning the semi-final. If he does that’s not immediately fatal for Maxime’s Candidates chances, since Ian would still need to win the final to clinch a place in the Candidates. The players who could stop him are Wei Yi and David Navara. 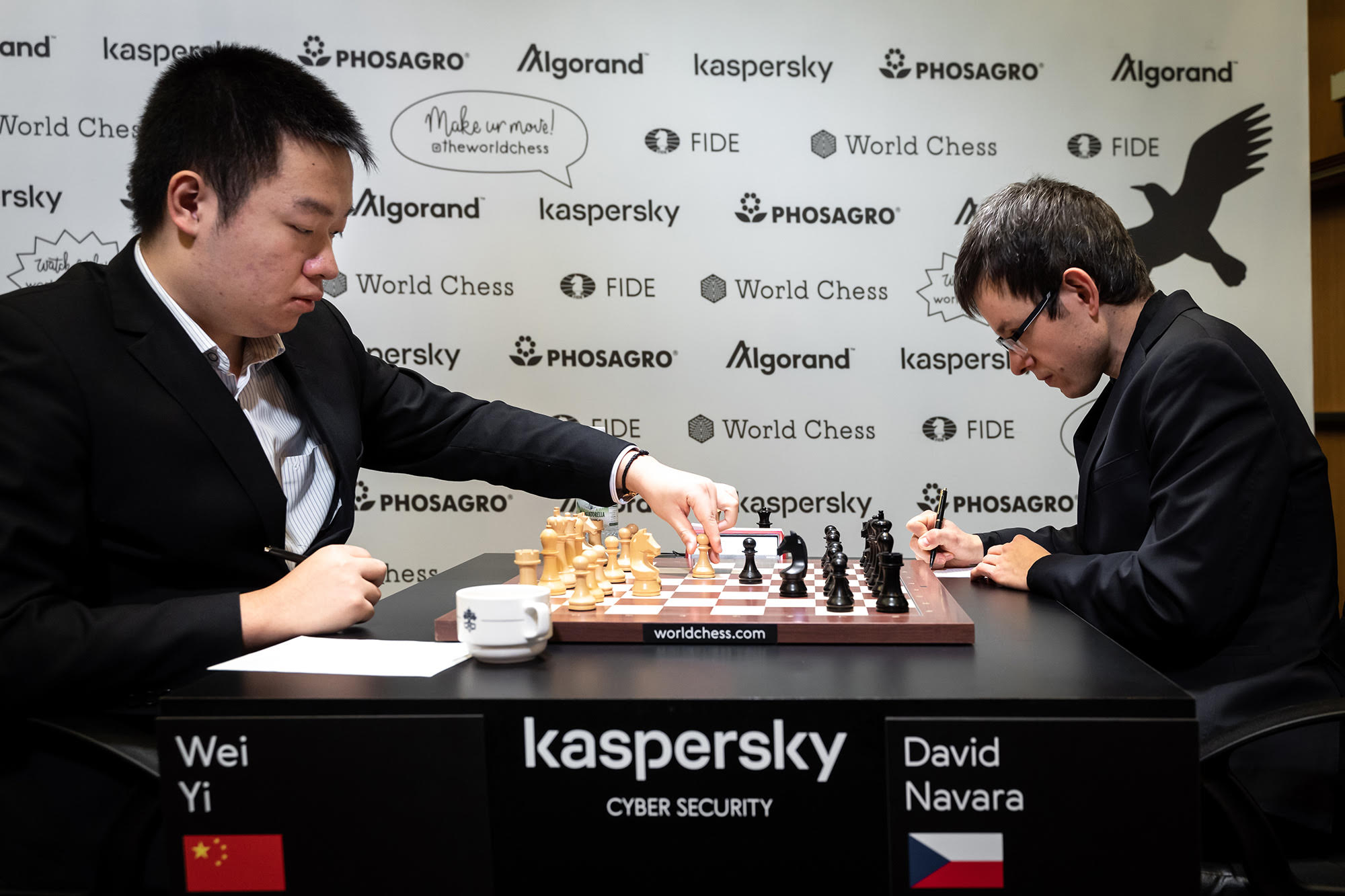 Wei Yi trying to look as though everything is going according to plan | photo: Niki Riga, official website

Wei Yi has knocked out Anish Giri and Sergey Karjakin in Jerusalem, but the first day of his semi-final against David Navara wasn’t his greatest hour. He thought he was playing Black but came to the board only to discover he had the white pieces. Perhaps unsurprisingly the game never quite exploded into life, but as is traditional in games featuring Wei Yi there were some memorable tactical moments. For instance:

12.Qc2! attacked the c8-bishop twice rather than moving the knight from e5. Another little tactical flourish came after 21…Ke6:

How can White undermine the c6-knight? 22.Ba6! Capturing on a6 or trying to defend b7 would give White a big edge, but after 22…d4! the game fizzled out into a draw in 52 moves, when bare kings were left on the board.

That means the last chance for Maxime Vachier-Lagrave to keep his Candidates qualification destiny in his own hands is to beat Nepomniachtchi on Wednesday and force tiebreaks:

Otherwise he's going to have a nervous weekend before Christmas hoping for Wei Yi or Navara to take down Nepo in the final.