Ian Nepomniachtchi is only a draw away from winning the Jerusalem FIDE Grand Prix and securing a place in the 2020 Candidates Tournament after Wei Yi rejected a draw by repetition in the first game of the final only to go on to lose with the white pieces in 96 moves. That’s bad news for the watching Maxime Vachier-Lagrave, whose Candidates hopes are hanging by a thread, but good news for 22-year-old Kirill Alekseenko, who may also be confirmed as the wild card before Sunday is over. 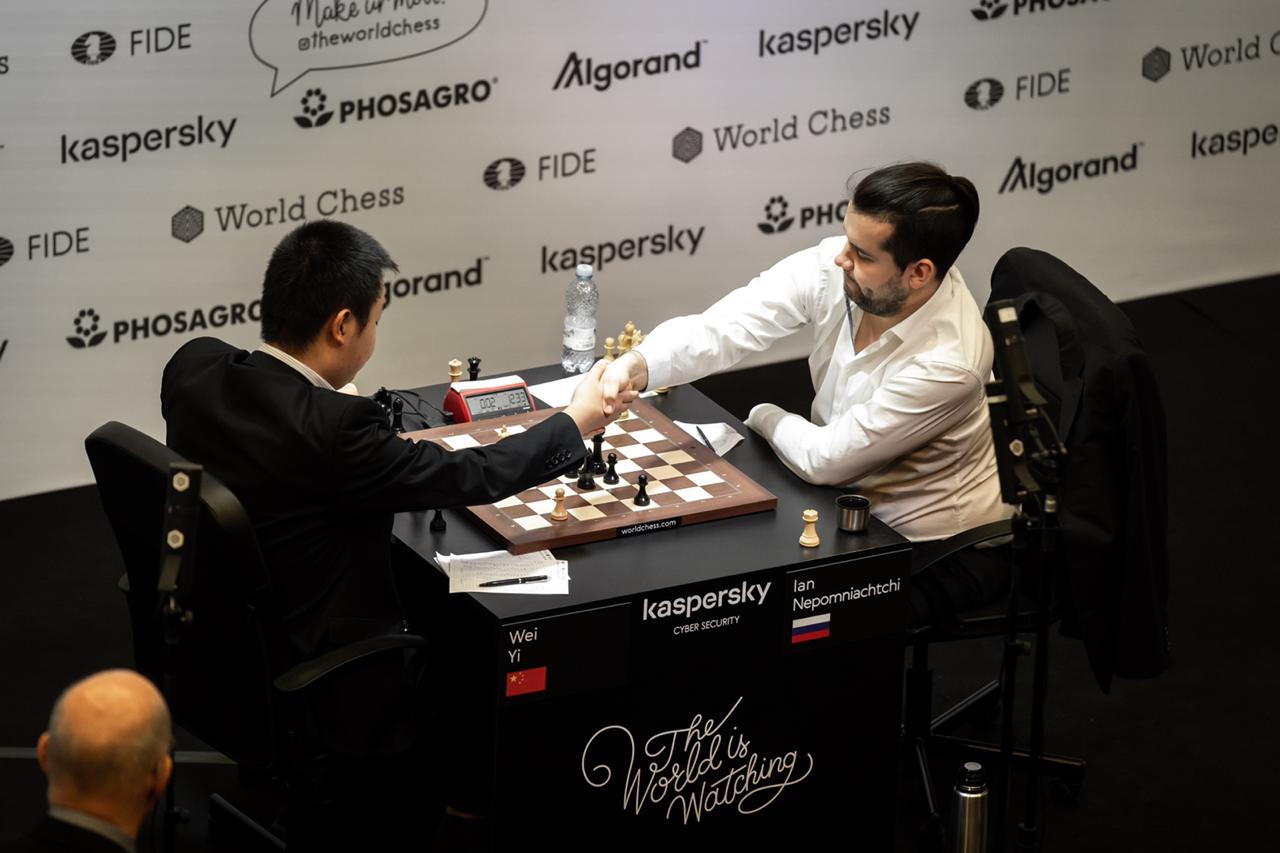 You can replay all the Jerusalem FIDE Grand Prix games using the selector below: 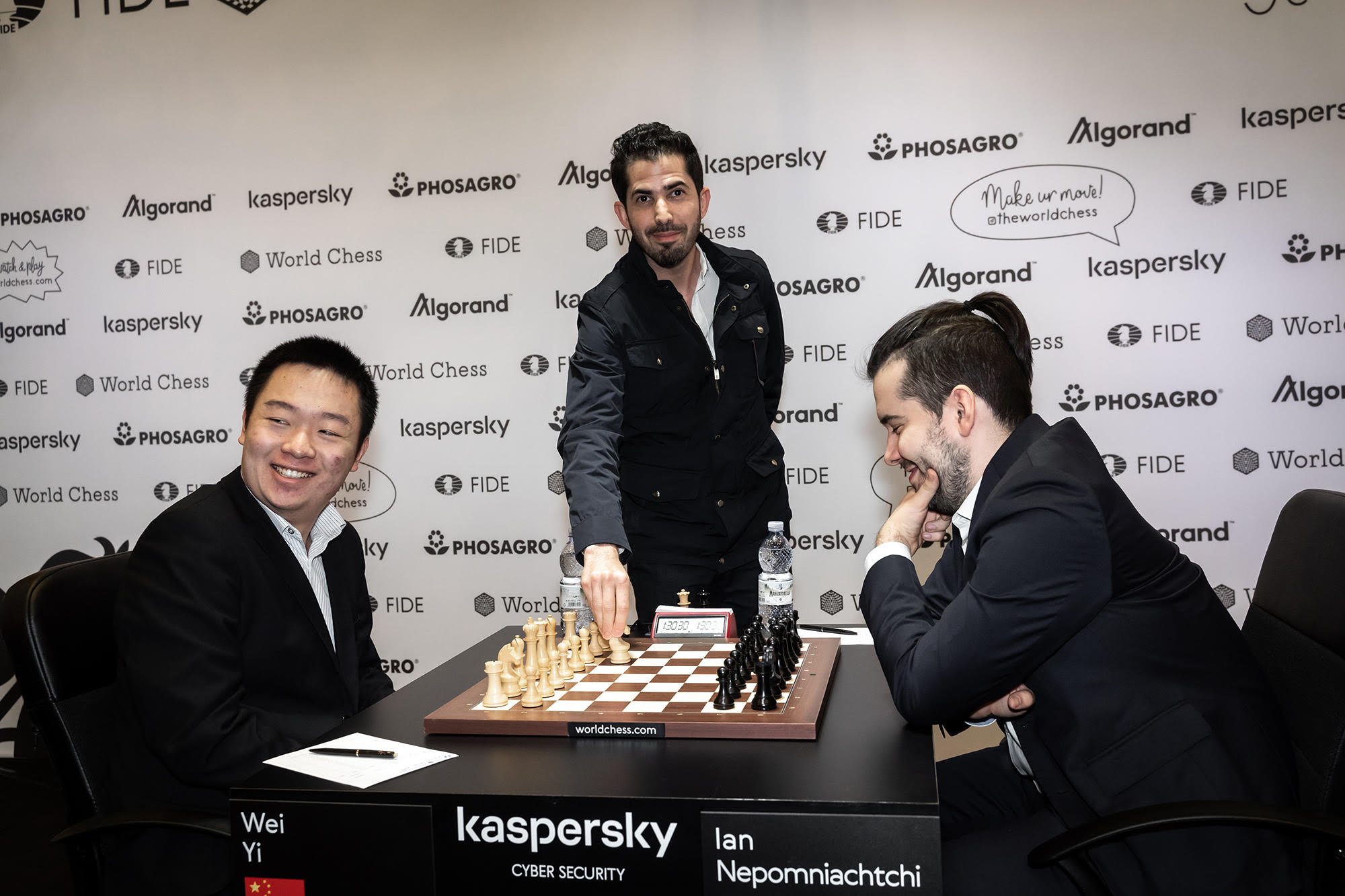 All smiles at the start, but it was to be a very tough game! | photo: Niki Riga, official website

The opening of the first game of the Jerusalem final saw Wei Yi return to the scene of a disaster, with the position after 9.Qa4, where Ian Nepomniachtchi spent 10 minutes, a familiar one to him:

Back in early August Wei Yi found himself dead lost on the black side after 13 moves and ended with a little joke that didn’t succeed:

Nepo didn’t repeat that experience and varied early with 9…Rb8 in place of 9…Bc5, with 12…Qb4!? the first move to deviate from Nihal Sarin’s draw against Maxim Rodshtein in the French Team Championship earlier this year.

We’ve included the diagram not because it’s such an extraordinary position but because Wei Yi here thought for a stunning 53 minutes before rejecting a queen trade with 13.Qd1!? 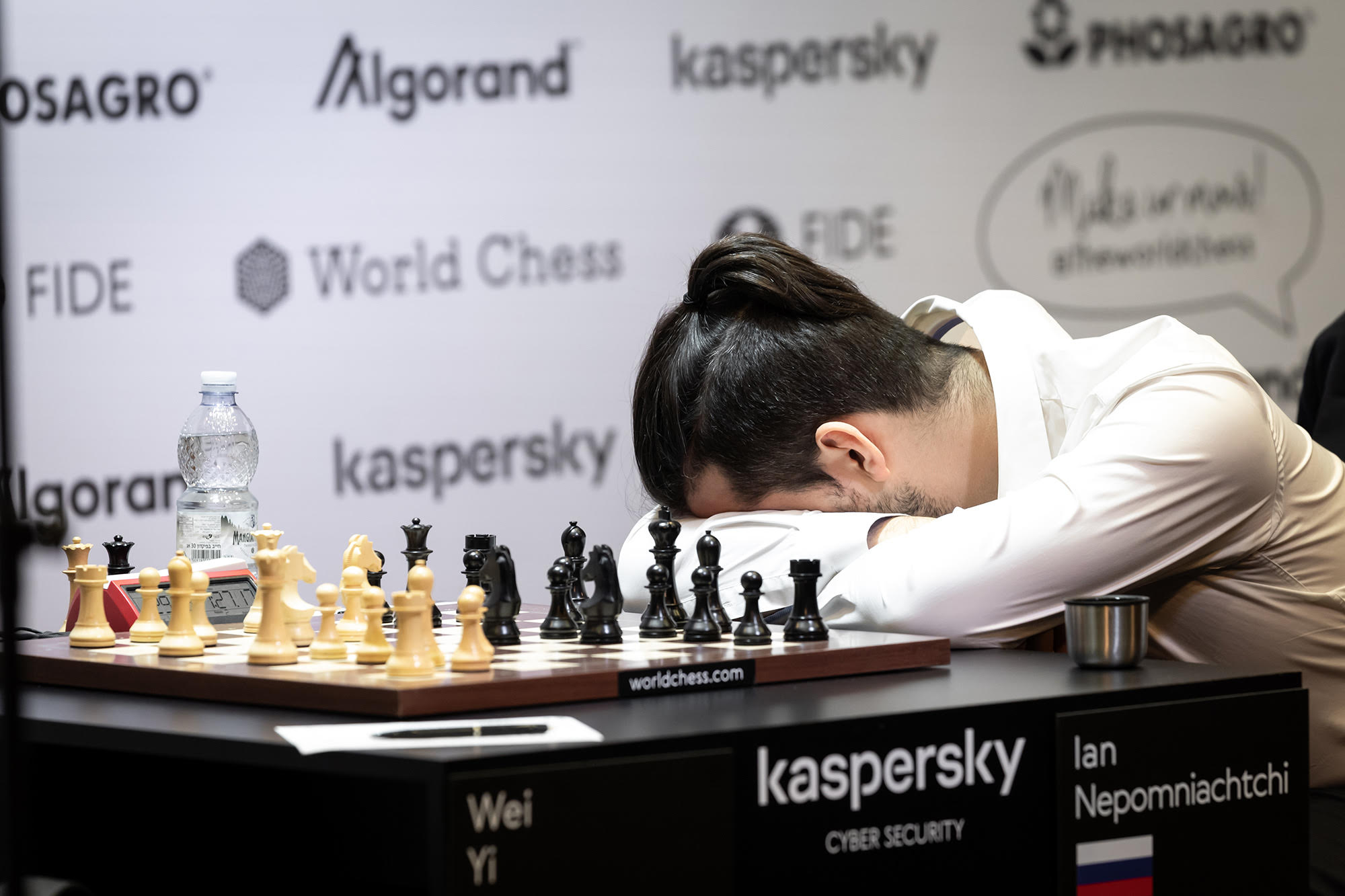 A half-hour lead on the clock had become a 20-minute deficit, and when Wei Yi later gave up the a2-pawn for an attack on the black king it seemed the time situation, not to mention the situation on the board, obliged White to take a draw:

The players have been repeating with Qg4+ Kh8 Qh5 Kg8, but here Wei Yi thought for 2 minutes and 53 seconds about repeating once more and taking the draw before, with just 2 seconds left on his clock, opting for 31.Nb5?!

Afterwards Wei Yi confessed that he’d simply missed Nepo’s exchange sacrifice 31…Rxb5! when after 32.Qxb5 Qxb2 33.Rb1 Qc2 the initiative was firmly on Black’s side. 34.Ra1! may have been sufficient for a draw, but after 34.Rfc1!? the Chinese player was walking a tightrope merely to survive until the time control. 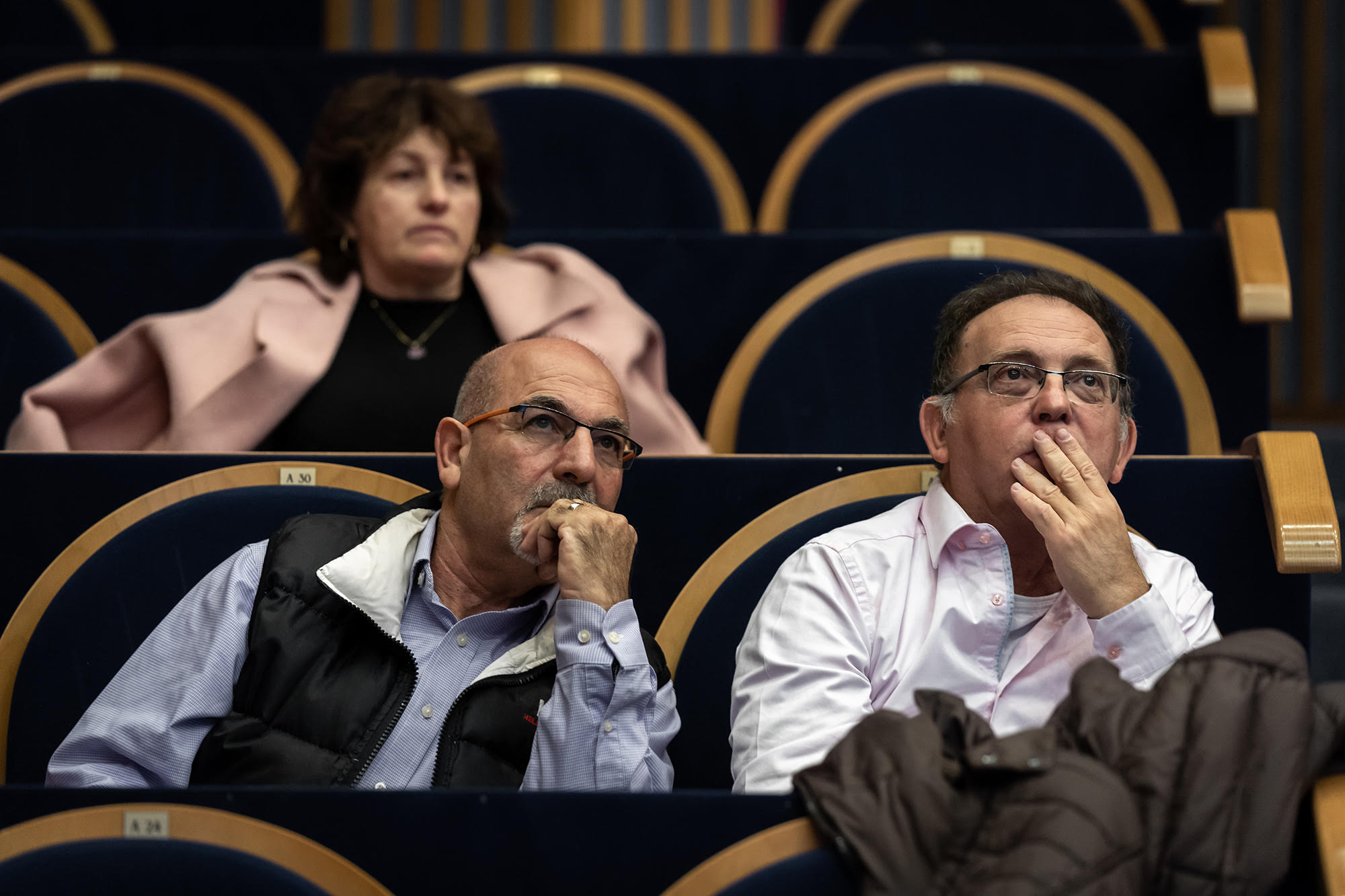 It was a fascinating struggle, but not an enjoyable afternoon's entertainment if you were called Maxime Vachier-Lagrave | photo: Niki Riga, official website

With a little help from his opponent he managed, but it was a position only Black could win, and it was all about Nepomniachtchi waiting to play d4 in the perfect circumstances. He missed an earlier, better chance, but when he finally did play 84…d4! his opponent had already been wearied by a long defence:

Play continued 85.Rd2 Qd5+ 86.Kg1 d3 and here 87.Qe5? seems to have been the fatal mistake (87.Qa3!? might have seen White scrape a draw in a queen endgame a pawn down, though Wei Yi wasn’t convinced afterwards that he would have managed).

The ending after 88.Qxe4 fxe4 was simply lost for White, with Wei Yi finally throwing in the towel after 96 moves, when the black pawns had become unstoppable:

That result meant Ian Nepomniachtchi has become a big favourite to win the Jerusalem Grand Prix, since Wei Yi must now win on demand with the black pieces to force tiebreaks on Monday. If he doesn’t Ian Nepomniachtchi is in the Candidates Tournament, which would of course be very bad news for Maxime Vachier-Lagrave – since Wei Yi wasn’t merely playing for himself:

Whatever you think about the system for determining the Grand Prix spots in the Candidates Tournament you don’t want to miss how this one ends! Tune in to the second and perhaps final game of the Jerusalem FIDE Grand Prix live here on chess24 from 14:00 CET on Saturday.