Jerusalem GP 1: Grischuk in the Candidates

Alexander Grischuk’s place in the 2020 Candidates Tournament was confirmed after Maxime Vachier-Lagrave’s Round 1 Jerusalem Grand Prix match against Veselin Topalov went to tiebreaks, eliminating the one scenario where Grischuk could still be caught. MVL remains the favourite to take the remaining spot, but no less than 7 matches went to tiebreaks after a nervy 2nd day that saw contenders Ian Nepomniachtchi and Shakhriyar Mamedyarov in trouble. Wesley So was the one winner as he beat Yu Yangyi to reach Round 2 and keep his own hopes of qualification alive. 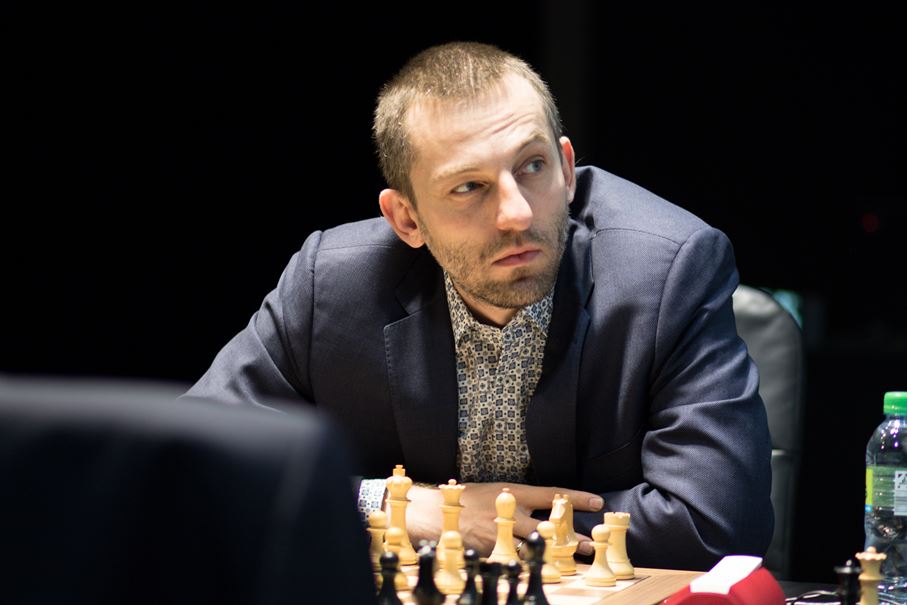 You can replay all the games from the Jerusalem FIDE Grand Prix using the selector below:

And here’s Evgeny Miroshnichenko’s live commentary on Day 2 in Jerusalem:

Chess fans are ensured of both enterprising chess and memorable interviews after Alexander Grischuk’s place in the 2020 Candidates Tournament in Yekaterinburg was confirmed. As we explained in our Jerusalem Grand Prix preview, the only way Grischuk could fail to take a spot in the Candidates was if Mamedyarov won in the final against MVL, who needed to gain 3 bonus points for winning his matches without tiebreaks. That scenario became impossible after Maxime, who had beaten Topalov in classical games in Riga and Hamburg, drew both games in Jerusalem. In fact it was the French no. 1 who had failed to equalise and found himself in some trouble in the first. 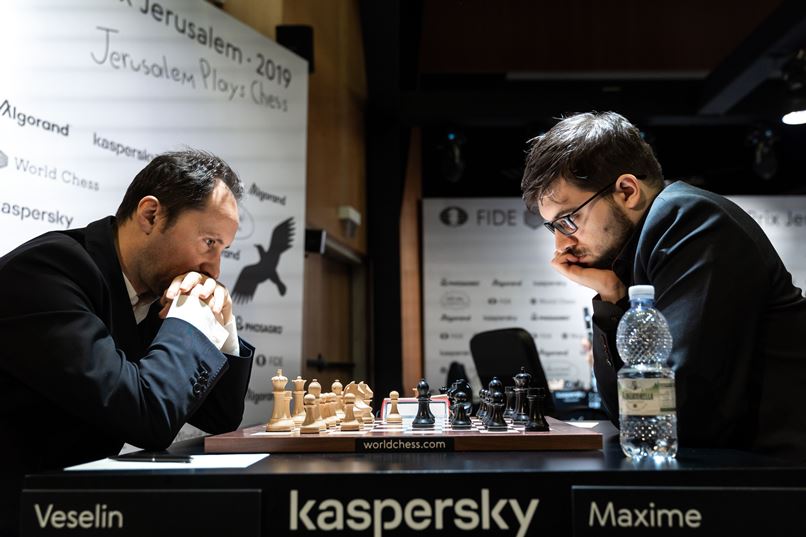 That means that Grischuk joins Fabiano Caruana (losing finalist), Teimour Radjabov (World Cup winner), Ding Liren (World Cup runner-up), Wang Hao (Grand Swiss winner) and Anish Giri (rating qualifier) as the six confirmed players in the 14-round tournament in March that will determine Magnus Carlsen’s next World Championship challenger. There are two more places up for grabs. One will be a wild card for a Russian player, with Kirill Alekseenko (2nd place in the Grand Swiss) set to play a match against any other Russian player who is eligible and doesn’t qualify automatically. That potentially means Ian Nepomniachtchi (in the Top 10 by rating), though Nepo is still in the fight for the one remaining place from the Grand Prix series.

Almost a dream first round for Maxime 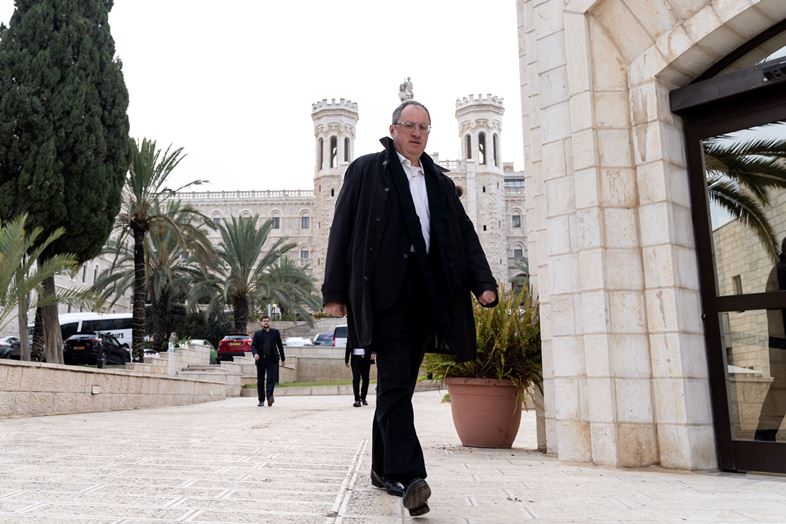 At one point on the second day in Jerusalem it seemed Maxime Vachier-Lagrave’s chances of qualifying for the Grand Prix might receive a huge boost as both his key rivals were in trouble:

23.Rh2!, holding on to the h-pawn before seizing the g-file, looks to be stronger than Dmitry’s immediate 23.Rhg1 Nxh4, though in the game after 24.Nd3 g5?! the Russian in any case gained a significant edge. Mamedyarov in the end made a draw with one hour left on his clock, but he could be somewhat grateful for his opponent forcing a repetition in a promising position. 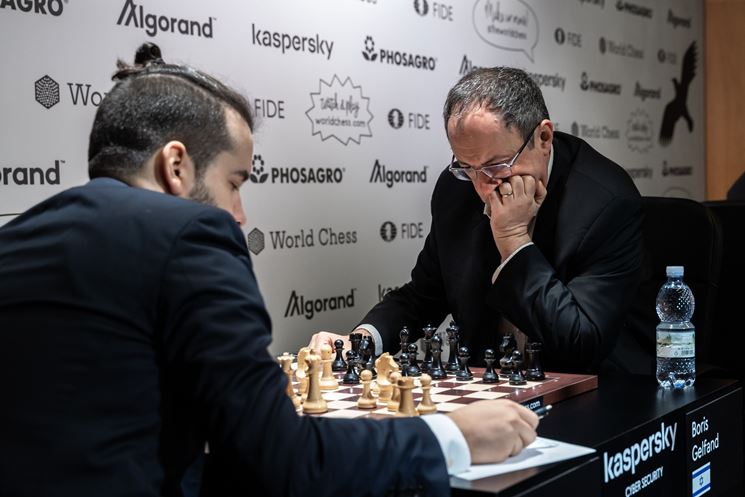 Ian Nepomniachtchi has the backup plan of qualifying as the Russian wild card, but he won't need it if he wins the Grand Prix | photo: Niki Riga, official website

Ian Nepomniachtchi, 4 GP points behind Maxime, made a 10-move draw with White against Boris Gelfand in Game 1. That was perhaps asking for divine punishment in a city sacred to three great religions, and Ian only survived Game 2 by something of a miracle. There were multiple critical moments, most notably after 22…a5?!

And here 29.Nxf5! blows the black king’s defences apart. Instead in the game after 27.b6!? Qd7 the same position was reached except that with the queen on d7 the knight sacrifice wasn’t possible. That still wasn’t the end of Nepo’s troubles, however: 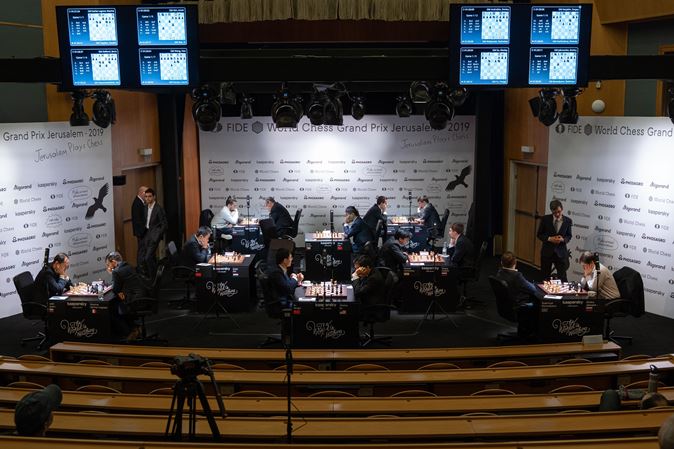 Wesley So keeps the dream alive

Wesley So came into the Jerusalem Grand Prix on 4 points and actually has decent chances of qualifying for the Candidates if he can win the event. That’s a big if, but he started perfectly by drawing the first game and winning the second against Yu Yangyi. That means he’s already up to 6 points (1 point for getting to Round 2 and another bonus for winning in classical chess), with the potential to reach 16 by the end of the tournament. If he does then MVL, currently on 13 points, would need to reach the semi-finals to surpass Wesley's score. 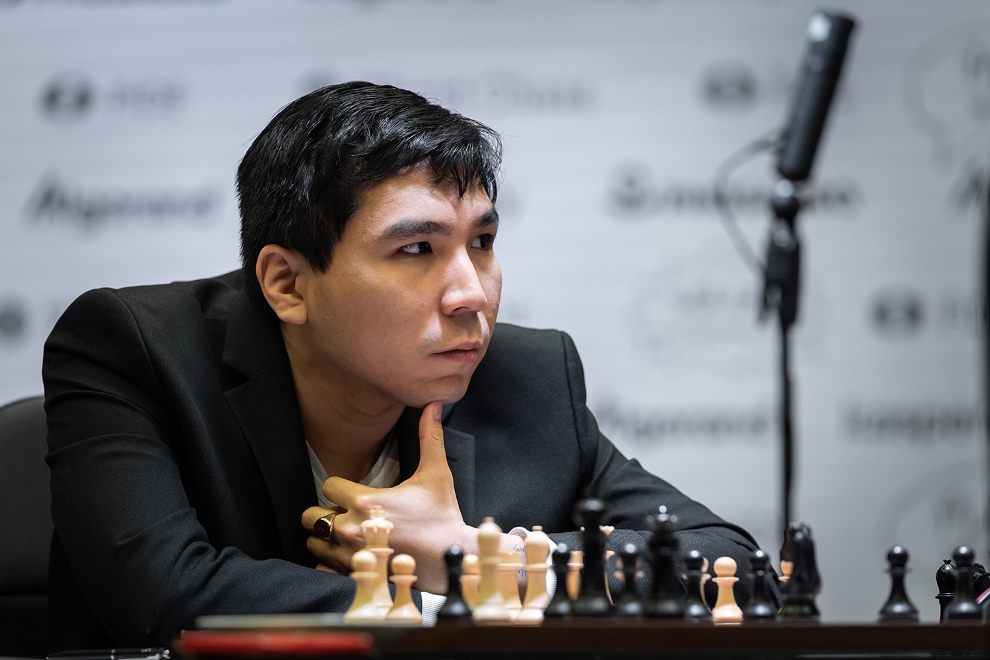 Wesley’s win was impressive, starting with a move 13 improvement on Alexander Grischuk’s Petroff loss to Fabiano Caruana in the final round of the 2018 Candidates Tournament in Berlin. Wesley was soon up a pawn and then found a nice finish:

Amazingly that was the only win in the 16 games so far in Jerusalem, but while there have been a significant number of quick draws there’s also been plenty of fight. On the first day Anish Giri was on the ropes after an exchange sac against Wei Yi that gave only nebulous compensation. After the longest game of the day their second encounter was the shortest - a 10-move draw. Anish commented:

My biggest chess hero is Magnus Carlsen and I'm slowly learning his tricks! This time I started to borrow his tricks from the World Championship match and just decided to go for tie-breaks.

Wojtaszek-Andreikin saw Dmitry Andreikin end both games with kings and an extra pawn, in 70 and 74 moves, while David Navara went one better (worse?) against Wang Hao, ending both games with bare kings on the board, in 50 and 91 moves! In the second game David came very close to knocking out one of the wild cards. 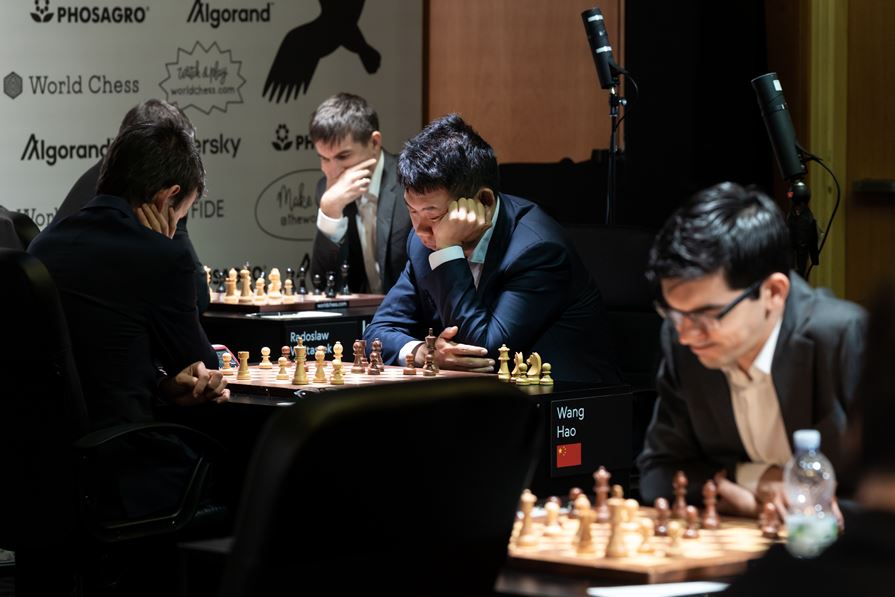 So many battles, so many draws | photo: Niki Riga, official website

The good news is that we’re guaranteed entertainment on Friday, with no less than 7 matches going to tiebreaks. As always those consist of two 25+10 games, then, if necessary, two 10+10, then two 5+3 and, finally, if the deadlock still hasn’t been broken, Armageddon, where White has 5 minutes to Black’s 4 but a draw sees the player with Black advance to the next round. With Candidates qualification at stake you don’t want to miss it.