Looks like it is gold medal season for the United States! The Americans not only got clear first in Rio, but also in Bubhaneswar, India, where GM Jeffery Xiong won the World Junior Chess Championship with one round to spare. The 15-year-old scored 10.5/13 and left first seed Vladislav Artemiev a whole point behind. Meanwhile, in the girl's section, the favorite Dinara Saduakassova from Kazakhstan finished first with 9.5 points. Let's take a look at what went on in the biggest city of the Indian State of Odisha. 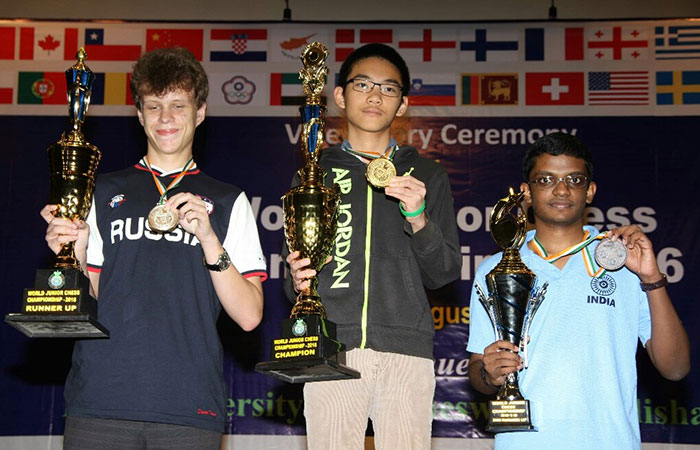 Xiong (center) was as impressive at the board as Simone Biles on the floor | photo: wjcc2016india.com

Becoming World Junior Chess Champion does not guarantee that you'll eventually turn into an absolute elite player, but it's sure a great start. Past winners from the last fifteen years include Levon Aronian, Shakhriyar Mamedyarov and Maxime Vachier-Lagrave. For a betting man it would be smart to put money on the fact that Jeffery Xiong will join this list in the future. After all, the young American has won his last three events and had quite a decent performance at this year's U.S. Championship too.

Xiong is currently sixth on the World Juniors ranking list and is the youngest among the Top 10. Although he hasn't made as much noise as the Chinese prodigy Wei Yi, he should start getting more attention after his great performances this year, including first at the Premier section of the Capablanca Memorial, first at the US Junior Closed Championship and now World Junior Champion. 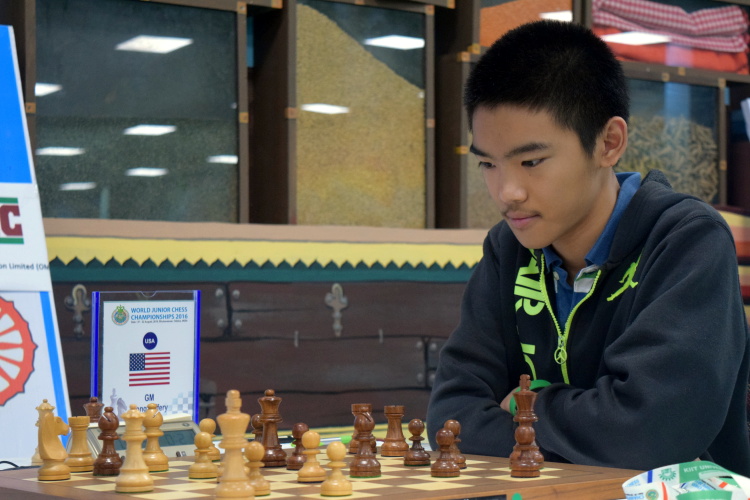 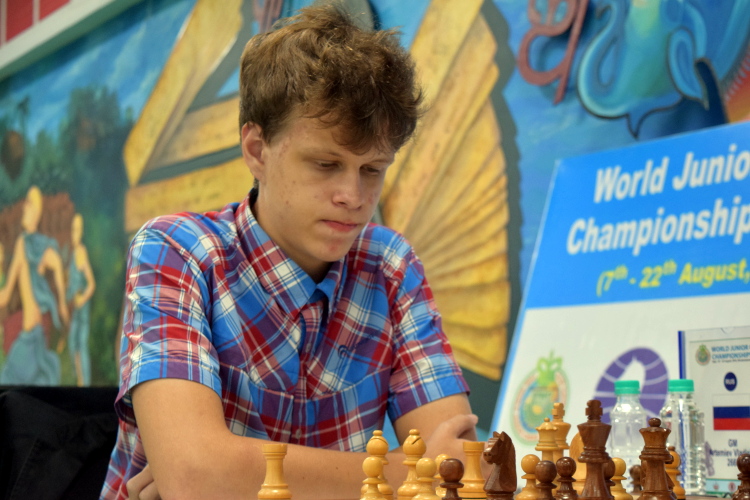 Jeffery obtained the title with 8 wins and 5 draws, the only undefeated performance at the long 13-round event. And he had to face very strong opposition.

The favorite by rating was Artemiev, the 18-year-old grandmaster from Omsk, Russia who already won the Russian Higher League last year and obtained a solid 5.5/11 at his country's Superfinal. In Bubhaneswar, Artemiev lost only one game and that was enough to come second in the race against the American — his defeat came in his seventh round game against China's Xu Yi.

Xu Yi finished half a point behind Artemiev, as did India's Narayanan Sunilduth Lyna. And that gives us a decent picture of the state of affairs in the world of young chess talents, since these four countries — China, Russia, United States and India — are the ones that seem to be investing the most in developing a strong new generation of players. 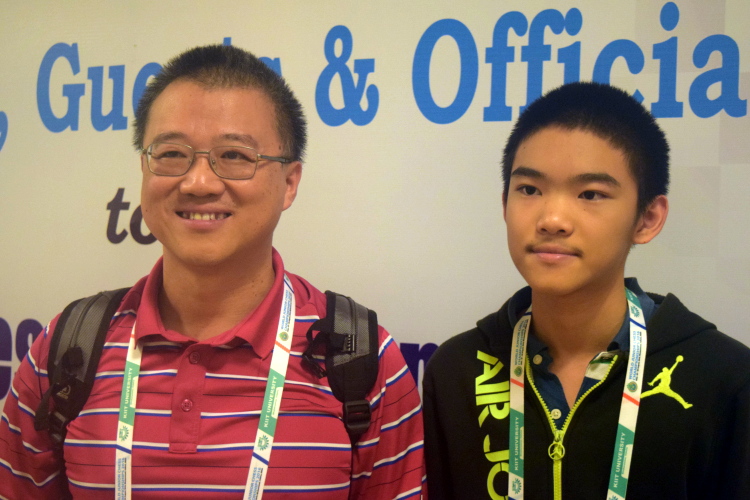 Jeffery and his proud father at the last round of the event | photo: official website

Grandmaster Julio Sadorra who was one of several coaches working with Xiong (from 2014-2015), was impressed that his former student handled both dynamic & static positions with aplomb.

I believe his success can be defined as preparation (in a general and chess-sense) meeting opportunity. Personally, I think it all started when "J" understood he had a great opportunity — to have supportive parents, be around a strong chess environment in Dallas [Texas], to be part of Kasparov Chess Foundation, etc. — and he made the most of it...Jeffrey can break any barriers now if he's given more invitations and exposure to higher-level events!

Here are a few more highlights Niclas selected from the American super-talent (click Select game for two other annotated examples of Xiong's play):

In the Girls' section, Dinara Saduakassova arrived as the first seed and lived up to the expectations, as she won with 9.5 points. Second place went to India's Pv Nandhidhaa, who only started the tournament as the 24th seed. Dinara Dordzhieva from Russia got as many points as the Indian but finished third on tiebreaks. 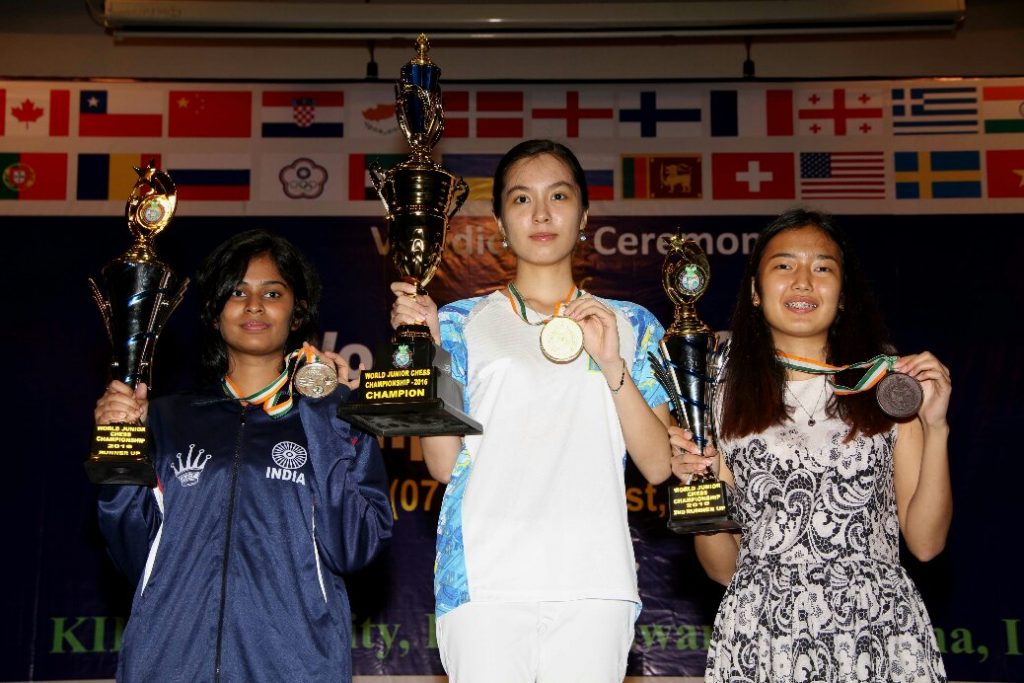 Just like in the open championship, Saduakassova's victory came as the only undefeated player in the field, and this was not her first world championship win — she also finished first at the World Under-14 Girls Championship in 2010. Her performance was almost flawless, except for one tiny hiccup in the very last round:

Given the fact that she won the event, this little incident probably won't put her down, plus she will have a great story to tell for the years to come!

You can replay all the games from the 2016 World Junior Championships with computer analysis — the organizers broadcasted all 39 boards from the open section and all 27 from the girl's section:

And the chess action continues! While you wait for the highly anticipated Baku Olympiad that kicks off on September 2nd, you can follow the Abu Dhabi Chess festival with Dmitry Andreikin as first seed, and see how with Markus Ragger won the Vienna Open, as well as many other events on our Live Tournaments page.