Chess24’s own Jan Gustafsson has won the 19th edition of the Bangkok Chess Club Open, a tournament he first won back in 2011. Indian GM Deep Sengupta took down top seed Nigel Short in the penultimate round and matched Jan’s unbeaten 7.5/9, but missed out on the trophy on tiebreaks. With Jan’s Thai break now over he’ll be heading back to commentate live on Carlsen, Caruana and co. in the GRENKE Chess Classic, that starts in Karlsruhe, Germany on Saturday. 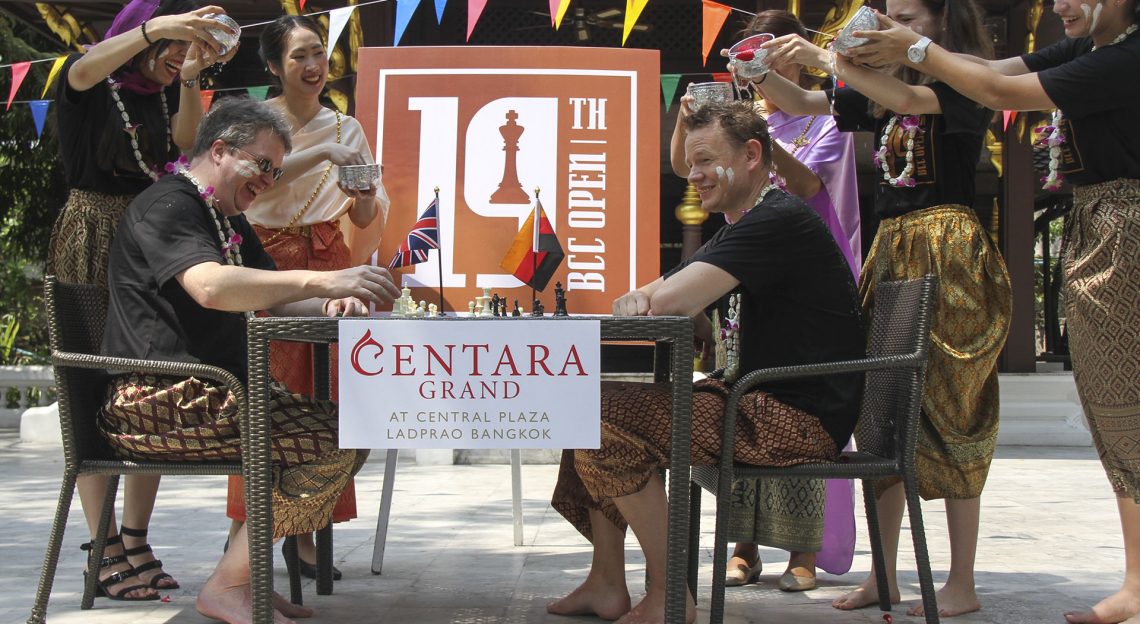 Jan had a lot to deal with on the way to victory in Bangkok! | photo: Bangkok Chess Club

We now have Jan's own commentary on how the tournament went for him - don't miss it!

The Bangkok Chess Club Open oscillates between being played in Bangkok and in coastal resorts, but this year it was played in Thailand’s capital city, in the Centara Grand Hotel in Central Plaza. You can replay the games using the selector below:

The clear top seeds for the event were Jan and former World Championship challenger Nigel Short, and for most of the event they lived up to that seeding, despite some hiccups along the way! We were treated to some highly enjoyable chess, with Nigel getting to open with the kind of tactic we’d all like to play:

In the next round, however, the top seed almost lost to 2025-rated Thai local Poompong Wiwatanadate:

This is that second opportunity when, with two minutes on his clock, Nigel could have played 39…Qxd2! and after 40.Qxc7 Kg6! 41.Re1 the most brutal winning move is 41…Nxf3! Instead after 39…Rf7? 40.Ne4! White soon had a winning position, but failed to convert.

After that Nigel got to play a legend’s namesake… 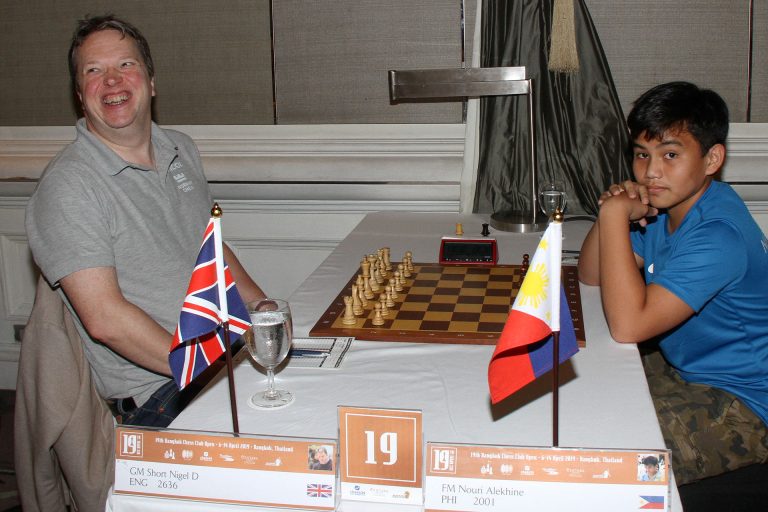 …and he produced some entertaining chess to win four games in a row. For instance:

Meanwhile Jan managed to win his first five games to take the sole lead, but it wasn’t all plain sailing. As he later commented in the chess24 chat, “got a bit lucky in rounds 3 and 5, but felt I started playing better after that”.

In Round 3 Jan was close to busted with Black against Indian IM Anup Desmukh but, with five moves to make in under a minute before the time control, White went astray and finally blundered everything with 40.Ne2?

In Round 5 another Indian, Grandmaster Karthik Venkataraman, suffered a failure of his sense of danger when he played 23.Rf2?? (23.Nd4 or 23.Bd4 and White is on top):

Jan conceded his first draw to third seed Lalith Babu in Round 6, setting up the showdown we were all waiting for against co-leader Nigel Short in Round 7. The two players had dined together at the event…

…and would take part in the Thai New Year Songkran celebrations…

…but their game was anything but a damp squib.

Jan stayed true to his Vienna Repertoire for Black against 1.d4 until 13.g3, a move both Vladimir Kramnik and Magnus Carlsen had played against Alexander Morozevich: 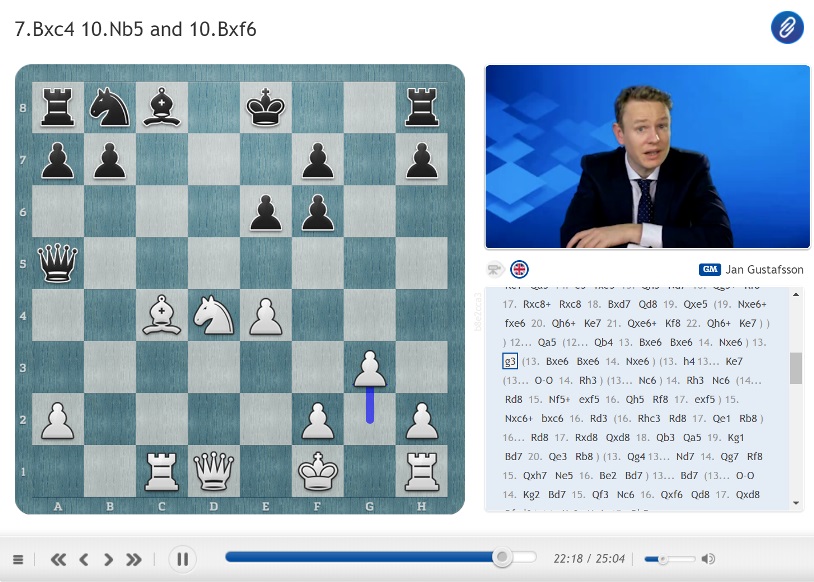 Here Jan recommended 13…0-0 in his series, but for this game he thought 15 minutes and decided to try something else, later commenting in chat, “I knew 0-0 instead of Ke7 was fine, but felt like pushing my luck OTB” (OTB = over the board).

Jan and Nigel were caught in the lead by Vietnamese IM The Anh Duong, who despite a 2302 rating managed to beat two 2500+ rated grandmasters in a row. Australian GM Zong-Yuan Zhao blundered badly with 44…Nd7? in Round 7: 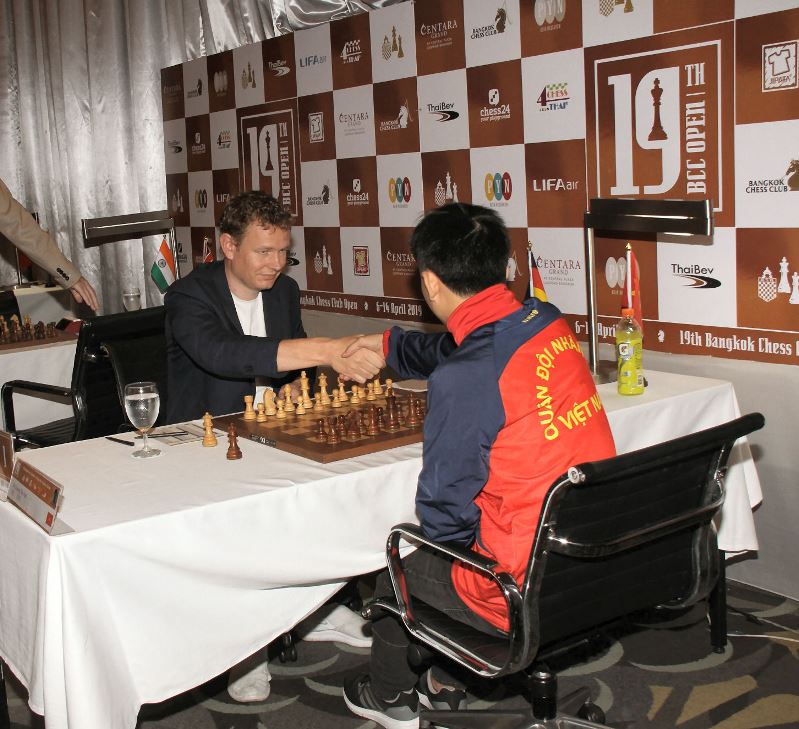 Duong was paired with Black against Jan in Round 8, and it’s fair to say his opening didn’t turn out so well. By move 5 Jan confessed to being out of book, but in a position which had to be in his favour, and by move 10 the computer was ready to throw in the towel on Black’s behalf:

Jan sensed he was close to victory over the board, and although not going for the computer’s preferred option (he picked 11.0-0 instead of 11.Nb3) there was only one move you could seriously question - if 13.Nxe6!? had been met by 13…Nxe6! Black would “only” have been much worse. Jan would go on to win a fine miniature by capturing a pawn on d5 with 17.Nxd5!!

Meanwhile Nigel had Black against Deep Sengupta and can’t have been thrilled with how the game was going:

After normal moves for Black, White is ready to open up the king with 34.Nxh5! That was a fate which needed to be accepted, however (after 33…Bf8! 34.Nxh5! it looks as though the game should end in a draw with best play), since 33…Ne5? 34.Bxe5 Qxe5 35.fxg7 just left Black down a piece. As Nigel commented:

Jan therefore went into the final round with a half-point lead, and had no problem with an 11-move draw with the black pieces against Indian GM Dhopade Swapnil. 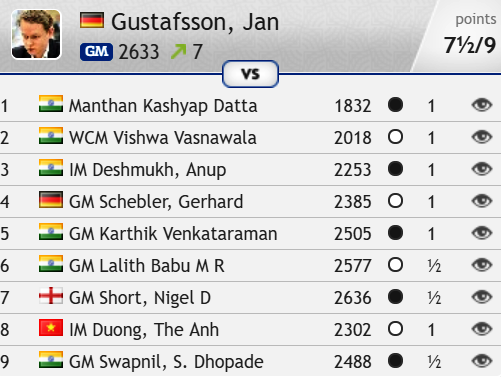 That might have been enough for clear first place, but Sengupta was soon better with Black against Philippines IM Haridas Pascua and went on to win in 54 moves. The fate of the trophy therefore depended on Buchholz tiebreaks, which worked out in Jan’s favour.

Nigel Short also drew his last game and had to settle for 8th place:

So congratulations are due to Jan on winning his favourite tournament for a 2nd time! It’s back to reality soon, since from Saturday onwards Jan will be commentating on the GRENKE Chess Classic live from Karlsruhe and then Baden-Baden with Peter Leko.