Jakovenko on how to beat Carlsen

Dmitry Jakovenko tied with Fabiano Caruana and Hikaru Nakamura for first place in the Khanty-Mansiysk Grand Prix, narrowly missing out on an automatic spot in the 2016 Candidates Tournament. He may still get his chance, and in a recent interview the Russian compared Magnus Carlsen to Bobby Fischer, explaining why the World Champion's style of play doesn’t work for other top players, and why beating Carlsen will require “a new Kasparov”. 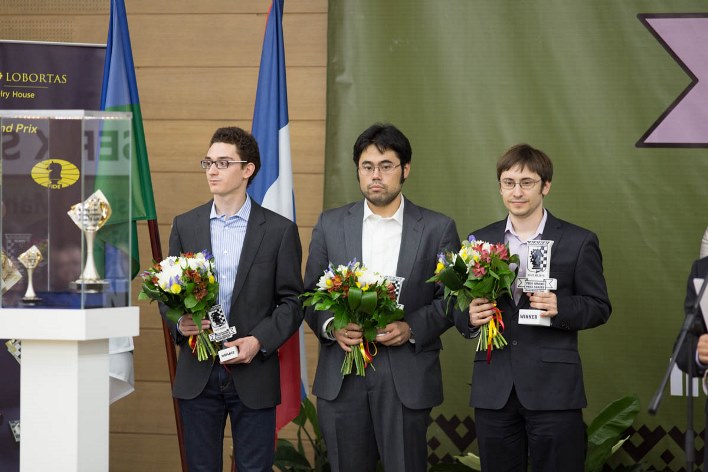 Jakovenko was given the winner's trophy after the Khanty-Mansiysk Grand Prix | photo: Kirill Merkurev, official website

Jakovenko was talking to Yury Vasiliev for ChessPro:

Yury Vasiliev: In Dortmund 2009 you scored as many points as Magnus Carlsen. Your rating back then was 12 points behind that of the Norwegian grandmaster. Since then Magnus has added a good hundred points to his rating, winning tournament after tournament. What do you think about the unprecedented phenomenon that goes by the name Magnus Carlsen?

Dmitry Jakovenko: In his day, Robert Fischer reached a new level of tactical precision which, I think, Kasparov wrote about in one of his books. Fischer didn’t make the same mistakes that his contemporaries, such as Boris Spassky, considered acceptable inaccuracies. And he didn’t forgive them, although he also had poor games. 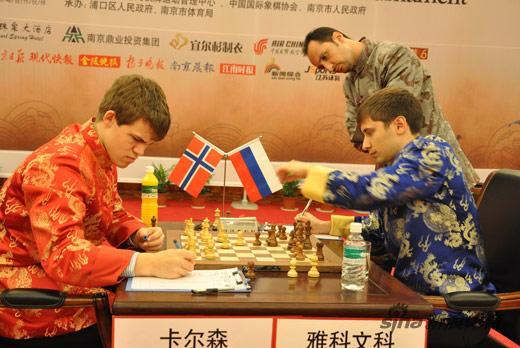 Veselin Topalov takes an interest in Carlsen-Jakovenko, during the 2009 Pearl Spring Tournament in Nanjing | photo: PaperBlog.fr

Carlsen, it seems to me, has gone to the next level of tactical precision. When people say Carlsen plays on to bare kings, that he maintains the tension, that even in equal positions he seeks out the slightest chance – that really is the case. But you have to grasp what it is that allows that to happen. And why others can’t manage it.

Any other chess player in the top twenty who tries to “squeeze water out of a stone” in an equal position would miscalculate at some point, then again overlook something at another and realise that, to be on the safe side, it’s better to make a draw… Carlsen, meanwhile, does the same thing but manages not to make any mistakes.

My good old friend, the Lviv Grandmaster Alexander Beliavsky, thinks that Magnus is helped in maintaining that new level of precision by his mentality: he plays better in the final hour of play than at the start and the middle of a game. As a great multiple ice speedway World Champion once told me: “When others brake I put my foot on the gas!” What do you need to do to beat that chess Superman? After all, surpassing him in the flawlessness of your play is impossible by definition.

In order to beat Carlsen you need a “new Kasparov”: maximum pressure right from the opening. “Outplaying” Carlsen won’t work, you need to “tear him apart”. If that fails then he’s extremely hard to beat.

I myself witnessed Kramnik in Dortmund and Wijk aan Zee take a firm grip from the opening and inflict defeat on Magnus – even with Black. Carlsen isn’t a computer. He also has nerves. In the match with Anand in Sochi he was one move from defeat in the 6th game. After that Vishy would have taken the lead and the fate of the match would have been in doubt. What would you have said about the “new level of precision” if Anand, having thought for a minute, had landed the obvious blow 26…Nxe5?

That’s nevertheless an exception. I’d instead point out the third game, where Anand managed to get an advantage in the opening and converted it into a win. That’s how you can beat Carlsen.

In the remainder of the interview Jakovenko goes into detail about the final Grand Prix in Khanty-Mansiysk, explaining, for instance, why he allowed Boris Gelfand to escape with an incredible stalemate. He also commented on Maxime Vachier-Lagrave’s losing streak:

It’s hard to recall a similar case when a chess player of his level lost four games in a row. I got the impression that after Maxime lost to Caruana with White he decided that it would only be fair if he lost to all of those who were competing to qualify for the Candidates Tournament. 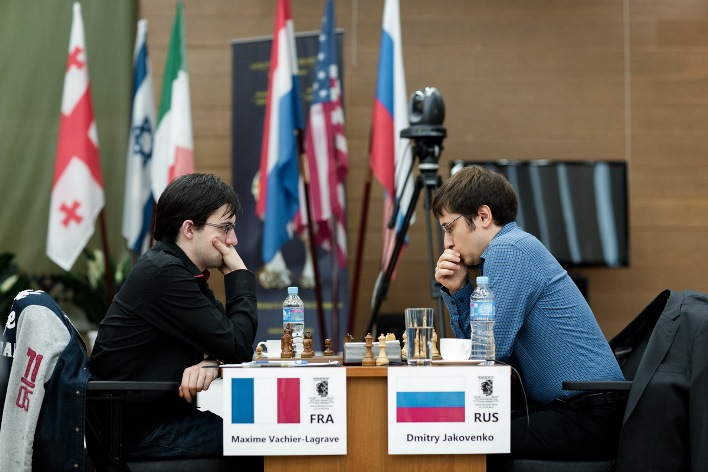 Dmitry is currently playing in the French League, with the biggest test for his team coming today. As he explained:

I’ve played for Clichy for ten years now. The team is no doubt the strongest in France and we’ve been champions around seven out of those ten times. There are a lot of Russian-speakers on our team: Pavel Tregubov, Almira Skripchenko and Maxim Matlakov, who has been playing for the last few years. This year we have a new serious competitor, Bischwiller, for whom Anish Giri, Arkadij Naiditsch and Etienne Bacrot are playing. I think the battle for the Championship will unfold among us.

The teams are locked on maximum points after five rounds, and Jakovenko is playing Etienne Bacrot in Round 6. You can watch all the games below: