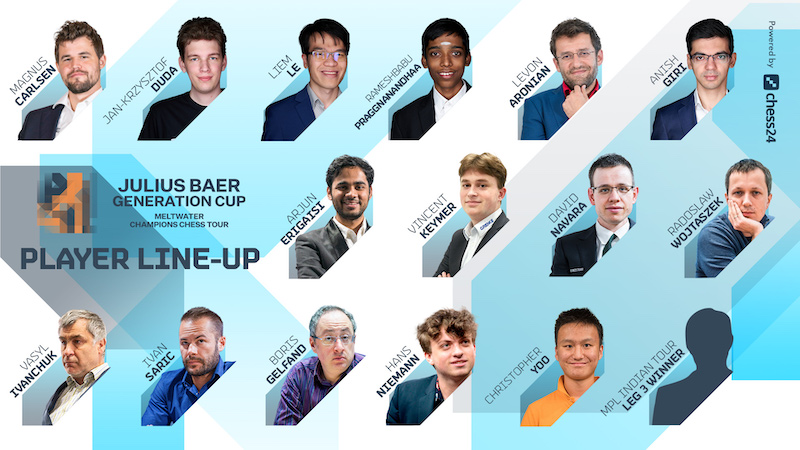 We’re thrilled to have chess legends Vasyl Ivanchuk (53) and Boris Gelfand (54), who have been top players for over 30 years.

Then we have the generation of teenagers currently taking the world by storm. India’s Arjun Erigaisi (19), Germany’s Vincent Keymer (17) and Hans Niemann (19) from the USA have all crossed 2700 for the 1st time recently, while India’s Praggnanandhaa (17) is rapidly closing on that mark. The youngest player in the field is 15-year-old Christopher Yoo, the reigning US Junior Champion.

The one remaining spot goes to the winner of Leg 3 of the MPL Indian Chess Tour, which will be decided on the same day as this announcement.

When does the Julius Baer Generation Cup start? 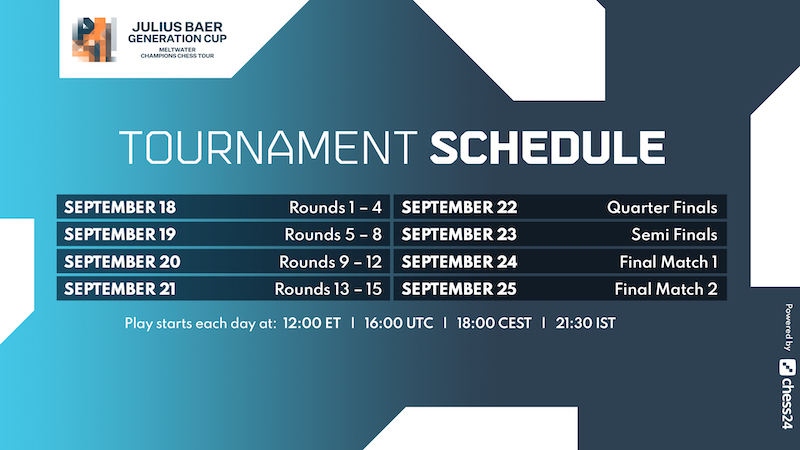 The first four days see each player play every other player once, with 15 minutes per player per game, plus a 10-second bonus after each move.

The pairings are already out, including Ivanchuk-Praggnanandhaa, Gelfand-Niemann and Erigaisi-Carlsen in Round 1. Check out the full pairings below:

The top 8 players go forward to a knockout, where ties are played with mini-matches of four 15-minute games.


What’s at stake in the Julius Baer Generation Cup?

The Julius Baer Generation Cup has a $150,000 prize fund, with $750 available for every win during the Preliminary stage. 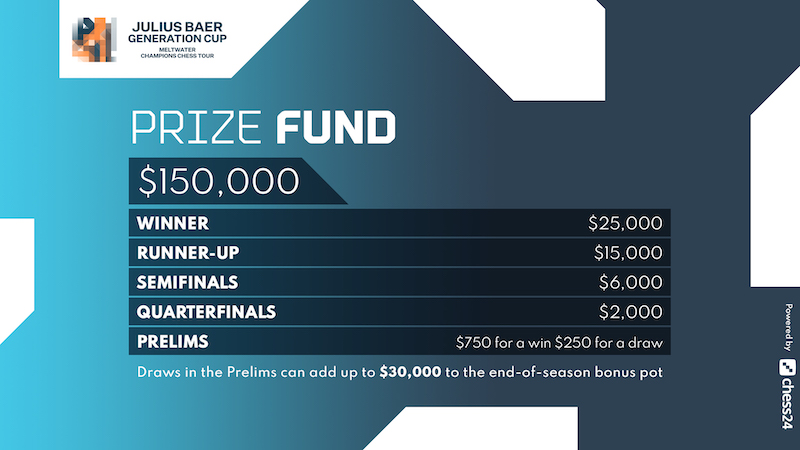 The two players who reach the final will also automatically qualify for the final Major of the 2022 Meltwater Champions Chess Tour, an 8-player tournament to be held in San Francisco this November. 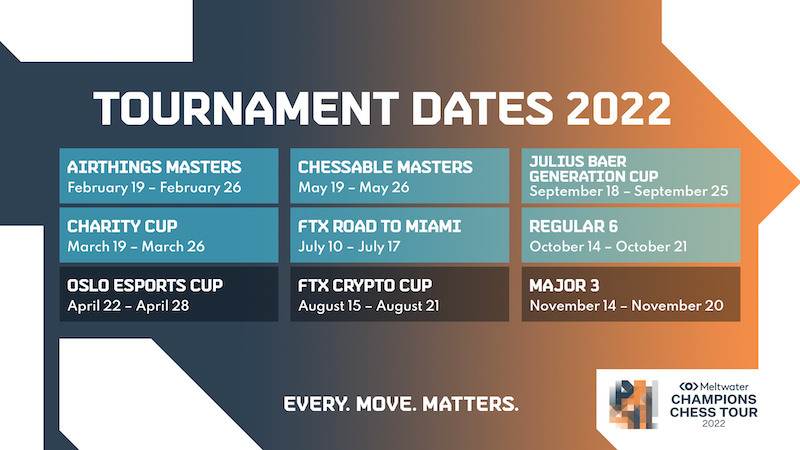 We’re also getting down to the final stages of the Tour, with a $50,000 bonus going to the winner. Magnus Carlsen is currently the clear favourite, but Jan-Krzysztof Duda and Praggnanandhaa could close the gap. 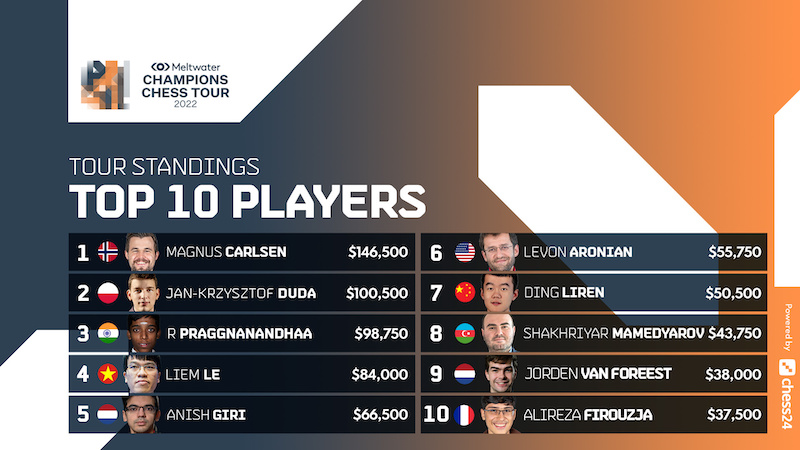 Why the Julius Baer Generation Cup?

The inaugural Generation Cup is being put on through a partnership between Swiss private bank Julius Baer and the Play Magnus Group.

The Julius Baer Generation Cup, with its inclusive intention, marks an even deeper involvement in the chess world for us.

The commitment to the Generation Cup is a consistent step for us, after we already supported last year’s Challengers Chess Tour, a unique gender-balanced chess event designed to promote new talent, which we continue to support this year as well.

Where can I watch the Julius Baer Generation Cup?

We’ll once again be broadcasting every move from the Julius Baer Generation Cup live here on chess24. You can watch with our Oslo commentary team of David, Kaja, Simon, Jovanka and Askild… 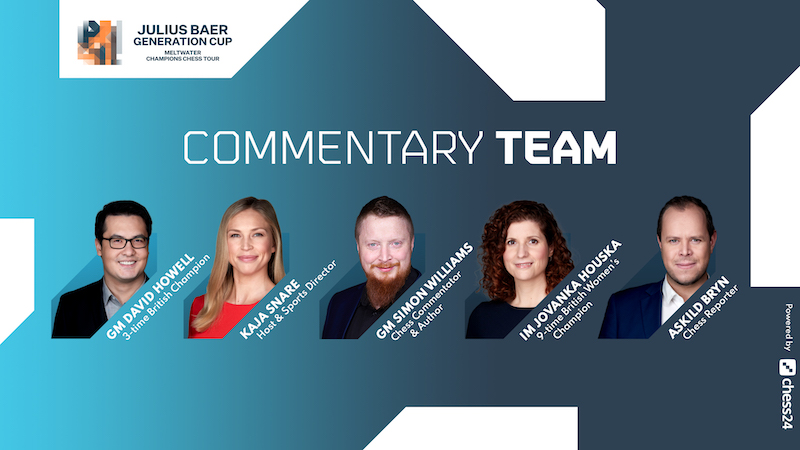 …or with Peter and Tania. 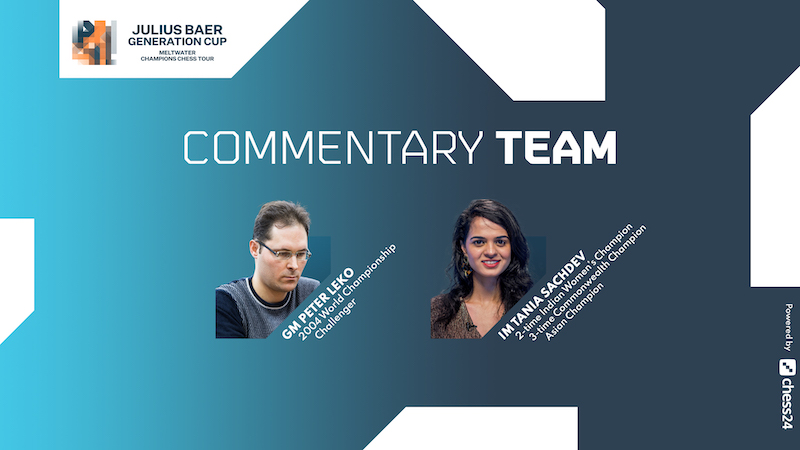 Don’t miss all the action here on chess24 from Sunday, September 18th!