Vassily Ivanchuk accepted Wei Yi’s rook sacrifice and advanced his king into the centre of a packed board to win Game 3 of their match and take a 2:1 lead. The veteran Ukrainian also showed he wasn’t afraid to take his young Chinese opponent on in the Sicilian. Meanwhile local hero Jorden van Foreest and international hero Adhiban have traded wins in three exciting games to tie their match. 20-year-old Dinara Saduakassova from Kazakhstan had the only perfect 4/4 score in the open after smoothly outplaying Sipke Ernst in Round 4. 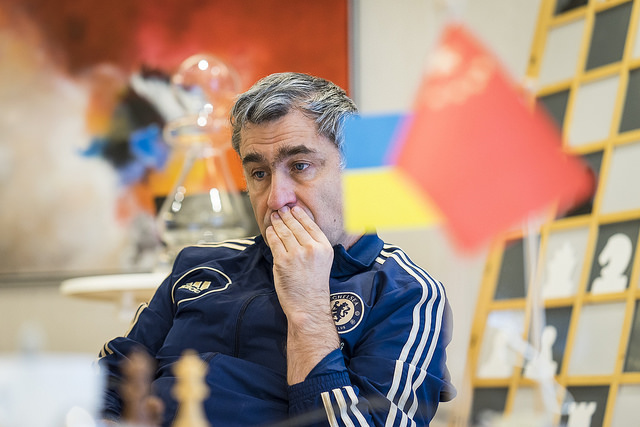 The highlight of the 21st Hoogeveen Chess Tournament is a fascinating encounter between 48-year-old Vassily Ivanchuk and 18-year-old Wei Yi. There may be a gulf in age and 6000 km between their birthplaces, but they both excite chess fans and were tipped as future World Champions as teenagers. Even if Ivanchuk has never quite fulfilled that potential in classical chess, he’s widely acknowledged as a match for absolutely anyone on his day.

You can play through all the games using the selector below:

The 6-game classical match in Hoogeveen started off quietly, with Wei Yi adopting what Jan Gustafsson in his 4.Qc2 Nimzo-Indian series calls the 6…d5 “roadblock”, a move popularised by Vladimir Kramnik. 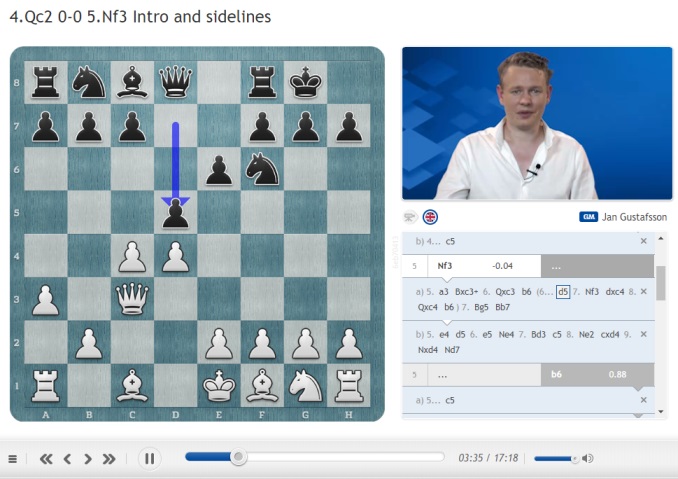 In his series for White Jan recommends 5.Nf3 to avoid most of the heavily studied paths after 5.a3, while in his black repertoire video series on the Nimzo-Indian he also recommends 6...d5 here

Wei Yi then managed to surprise his illustrious opponent with 10…Nc6, although Hikaru Nakamura had played the move against Alexander Grischuk in a Paris Grand Chess Tour blitz game earlier this year. Ultimately Vassily had a nominal advantage, but some accurate defence saw the game fizzle out into a draw. 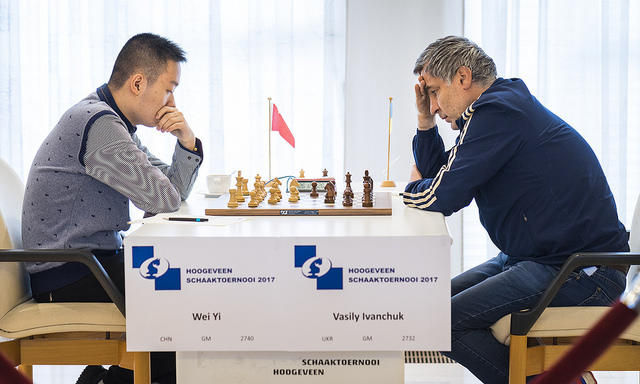 Game 2 was more like what we were hoping for, though! At the opening ceremony Wei Yi was asked where he would be if no-one played the Sicilian against him, and replied, “Then I would have 100 Elo points less!” Wei Yi has left a trail of the battered and bruised bodies of those who’ve tried (for instance: Wei Yi-Bruzon, Wei Yi-Nepomniachtchi and Wei Yi-Xu Yinglun).

The database under our broadcasts shows Wei Yi's Sicilian games - as you can see, he scores pretty well... (note that clicking on a game opens it up in the notation above)

What followed was what we've come to expect. Despite the Sicilian being so heavily studied Wei Yi found a way to vary, castling short rather than long on move 11 compared to a game he played against Alexei Shirov four years ago. Shirov himself had tried that and beaten Hoogeveen tournament organiser Loek van Wely, but soon the players were on their own, and then, as always seems to happen, Wei Yi took a deep think and came up with a sacrifice:

What was the point? 20.Bxb5! and the queen can’t recapture due to a knight fork on d6, while after 20…axb5 21.Qxd5 White is doing well. It’s traditional for Wei Yi’s opponents to collapse at some point at around this stage, but Ivanchuk had everything calculated accurately and after 20…gxf5! 21.Bxd7+ Kxd7 22.Reb1 Qe5 23.c4 White had enough to force a draw by perpetual check, but no more. A high-quality encounter. 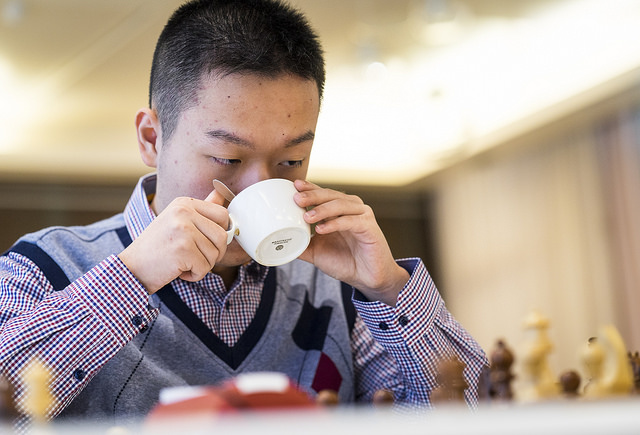 Blood was finally spilled in Game 3. Ivanchuk provocatively developed his king to f2, tempting Wei Yi into a tactical adventure with a fatal flaw. The odd thing, though, was that his sacrifice would have worked out one move previously:

He expected only 22.Rc8+ Kg7 23.Nc4 Bxc4, when Black is better if White captures with the king or bishop, but as our silicon friends point out, White is winning if he captures with any of his three heavy pieces. In the game Ivanchuk played the even better 22.Qxb7! and, tough as it is to believe, there’s no way to embarrass the white king on d4. 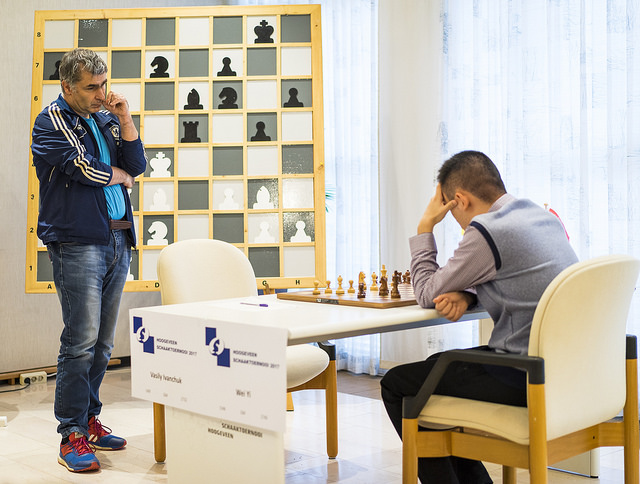 India’s Adhiban and 18-year-old former Dutch Champion Jorden van Foreest are both known for attacking chess and have lived up to that reputation in Hoogeveen so far. 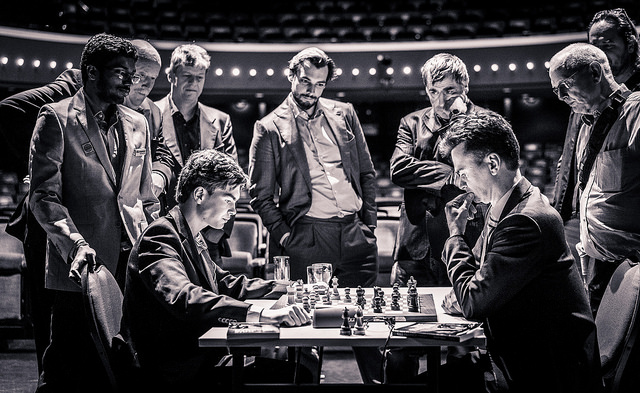 In Game 1 Adhiban sacrificed a piece in the opening, won a pawn, but couldn’t quite bring home a victory. Jorden then had White in the next game and looked as though he might punish his opponent for not taking that chance, until 15…Na5: 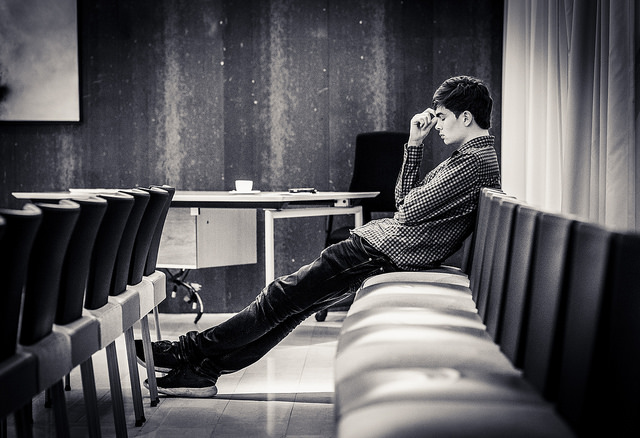 In Game 3, though, Jorden also won with Black to level the scores. Adhiban had correctly sacrificed a piece but gradually lost the thread and blundered with 30.Kf2? (30.Rxe1 Rxe1+ first was essential): 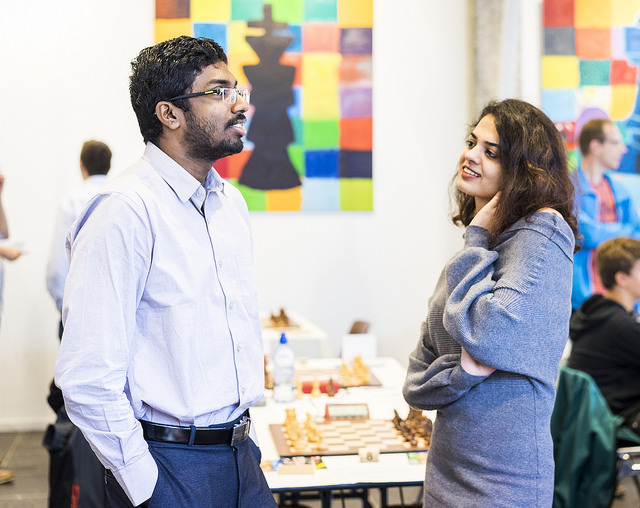 Adhiban with compatriot Tania Sachdev, who is playing in the open | photo: Lennart Ootes, official website

Saduakassova races out of the blocks

The matches are accompanied by a 9-round open, which while not super-strong has an interesting mix of local talents and foreign players:

Multiple Girls World Champion Dinara Saduakassova from Kazakhstan is out in front after an impressive win over Sipke Ernst took her to 4/4. 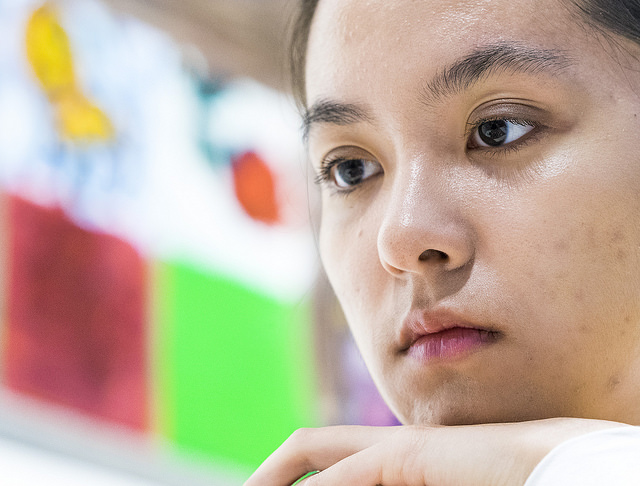 It's early days, but Dinara is on track for a GM norm | photo: Lennart Ootes, official website

The most curious game so far has been Xu Xiangyu’s win over Bardhyl Uksini. 24.Nxh7!? is a hard move to criticise since it provoked immediate resignation!

On the other hand, it turns out Black is winning after 24…Qb4! and crude threats such as taking on a4 and giving mate on a2. 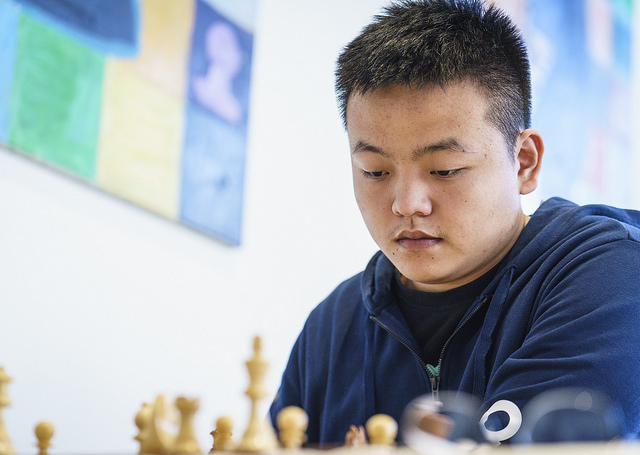 Xu Xiangyu got more than a little lucky in Round 4! | photo: Lennart Ootes, official website

Loyal chess24 viewers, meanwhile, have been following the fortunes of 13-year-old local Dutch talent FM Siem van Dael, who is perhaps better known as moderator Simba7. In Round 3 he scored a great win over Jorden’s IM brother Lucas Van Foreest:

How can White break through? 23.Bd3! followed instantly, and the threat of capturing on h5 and giving mate on h7 meant Lucas had to give up a piece with 23…Qf8 24.Rxh5 Qxh6+ 25.Rxh6. There was plenty of potential to go wrong after that, but Siem held his nerve to score a big win! 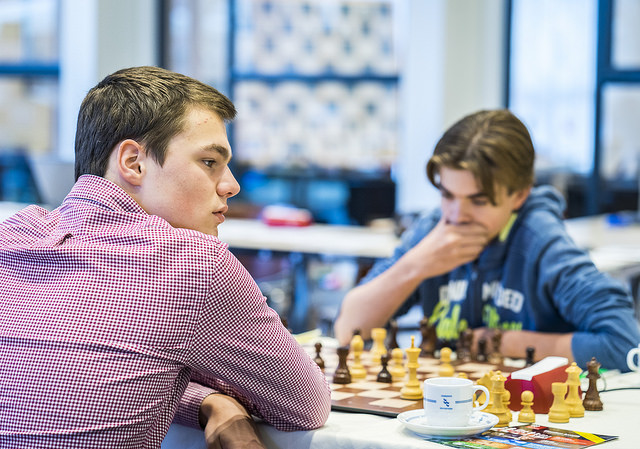 The games start each day at 14:00 CET and can be watched here on chess24: Matches | Open You can also follow the action in our free mobile apps: