Peter Svidler and Jan-Krzysztof Duda will play the Pepe Cuenca and Divis Invitational final at 18:30 CEST on Thursday April 16th after defeating David Anton and Vladislav Artemiev in the semi-finals. Svidler-Anton was a relatively comfortable 7:4 win for Peter, though only after he survived the wobble of missing mate-in-2 in the one game he went on to lose. Duda-Artemiev was a brutal clash between two of the world’s best speed chess players, with Duda triumphant only in the 2nd sudden death game as he won 7.5:6.5. 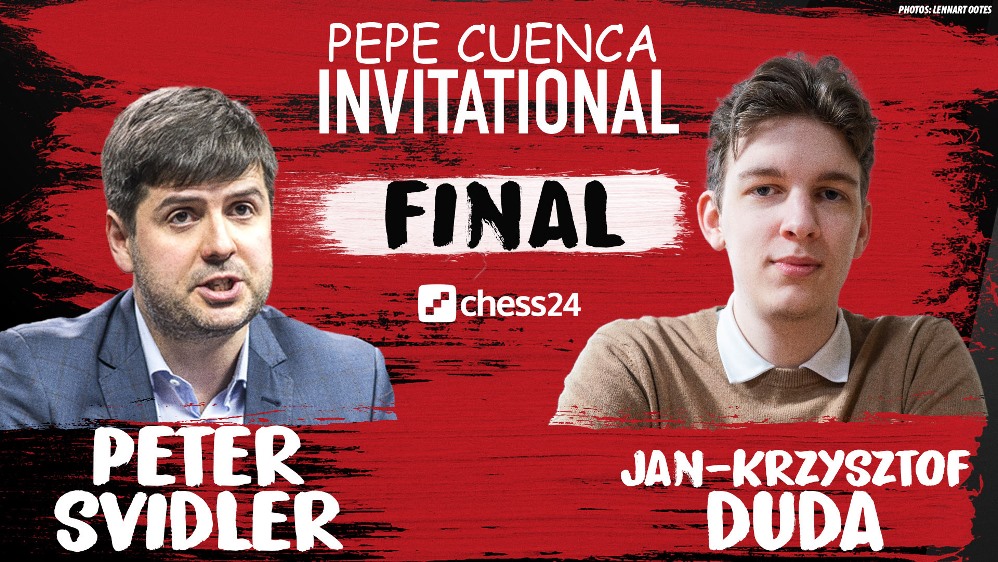 You can replay all the games from the Pepe and Divis Invitational using the selector below:

Rewatch the match with live commentary by Jan Gustafsson and Pascal Charbonneau:

Peter Svidler explained that for once he was faster than his opponent:

I was constantly finding myself with more time out of the opening, which is unbelievably comfortable for me, because it’s really not what I’m used to.

Overall things couldn’t have gone much better for the 8-time Russian Champion, whose, “I think in general I didn’t play all that poorly today,” is equivalent to most people’s “I had a fantastic day at the office!” Peter opened with a win, but the whole match perhaps turned on Games 4 and 5. In the first he spoilt a promising attacking position, then blundered and went down to a deserved defeat, with 24-year-old Spanish star David Anton winning in 53 moves. There was a big “but”, however, since 52…Ke2?? by David (52.Qc1!) was a losing mistake:

Peter explained, “I basically resigned in my head already,” and it was only while playing 53.Kh2?? that he spotted that 53.Qf1+! Ke3 Qf3# is actually mate-in-2 for White! After 53…Qf4+ Peter resigned, fully aware that he’d just squandered a whole point:

He admitted that put him on tilt and went for the King’s Indian, after which he found himself more busted than usual in that opening after 22 moves:

22…Rf4!? is a typical try for counterplay, but as our commentators explained, it works a lot better when you have a bishop on g7 that gets unleashed after 23.Bxf4 exf4. Instead 24.e5! was simply winning, but it turned out nothing was that simple as some inaccuracies from White and fine dynamic play by Black ultimately led to a black win.

Peter had regained the lead and never looked back, going on to win two games and draw four in the remainder of the match. He finished the final game with the last twist of the knife 28…Bh3!

29.gxh3 Qxe4+ is mate-in-2. That meant Peter could switch to fulfilling a lifetime dream of both playing in and commentating on the same tournament, as he joined Jan for the next semi-final:

The prize fund structure of this event is that you get nothing unless you reach the final, where the loser gets $500 and the winner $2,000. Peter opened his commentary with:

Those guys must be licking their chops right now. All that money waiting for them in the final!

That was some typical Svidler self-deprecation, but at the same time these two young players showed themselves to be terrifyingly good...

As you can see, it took 7 games before we got a draw, with some nice moments. For instance, 30…Re6? in Game 5 allowed Vladislav Artemiev a sweet winning move:

31.Bg7! and there’s no stopping mate. The first draw came only after both players missed wins, with Jan-Krzysztof Duda allowing a draw by 3-fold repetition at the end in what was probably a winning position.

Things only got better when the match was tied at 6:6 and it became sudden death – the first player to win a game would win the match. It looked at first as though that would be Artemiev, with the Russian grandmaster getting just the kind of technical position in which he’s phenomenally strong:

Duda can barely move, but the young Pole showed both resourcefulness and optimism (he later said he felt the position should be defendable) as he went for the pawn sacrifice 24…b5! It seems Vladislav should have ignored the pawn but after he took on a5 Duda managed to survive, though only after Artemiev returned the favour and also stumbled into a draw by 3-fold repetition.

The 13th and as it turned out final game was spectacular, with both players going for a hyper-sharp line they confessed to being unable to recall in enough detail. It made for a real slugfest, where Duda had the first chance to land a killer blow:

Svidler quickly spotted 19.Bxd4!, as did Duda, but too late! “I was very annoyed that I missed it” he said afterwards, but after 19.Rd1 his position was still good and he showed icily cool calculation in what followed:

27.Rd6! Not strictly necessary, but a beautiful move to simplify the position! After 27…Qxd6 28.Qxc8+ there were no more tricks, and Duda went on to clinch a stunning win:

It was one of the most brilliant online blitz matches we’ve witnessed, even if it would be eclipsed just a day later!

That win for Duda sets up a final against Peter Svidler at 18:30 CEST on Thursday 16th April. We can’t promise Peter commentating this time, but you definitely don’t want to miss it!

There’s again an embarrassment of riches before that. At 14:00 CEST we get to see a world first – a Banter Blitz session from world no. 3 Ding Liren, one of the first of a series of Banter Blitz sessions from the Magnus Carlsen Invitational players:

That’s followed at 16:00 by another highly secret training match by Anish Giri, who this time takes on Vidit. Will this warm-up go better than the debacle of a 3:1 loss to Jorden van Foreest in the first match? You can follow that 4-game 15+10 rapid match, with the white player commentating while player, here on chess24.