Isle of Man 8: Day of the underdog

Of the top nine seeds at the start of the Chess.com Isle of Man International only one player, Maxime Vachier-Lagrave, goes into the final day with a chance of winning a share of the £50,000 first prize. The leaders are Arkadij Naiditsch, who beat Hikaru Nakamura, and Radek Wojtaszek, who beat Mickey Adams, while Gawain Jones is among the four half a point back after taking down top seed Levon Aronian. Elsewhere 13-year-old Vincent Keymer brilliantly beat Boris Gelfand, and Alina Kashlinskaya heads the women’s race after defeating Rinat Jumabayev. 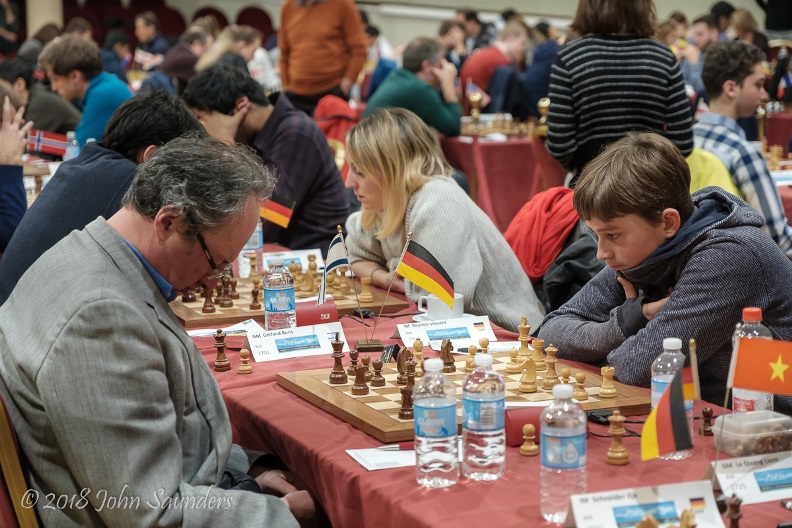 You can check out the pairings and replay all the games from the Isle of Man using the selector below:

No-one would have predicted at the start of the tournament that 10th seed Radek Wojtaszek and 13th seed Arkadij Naiditsch would lead the field going into the final round, but they do after they were the only players out of the seven leaders to win in Round 8. 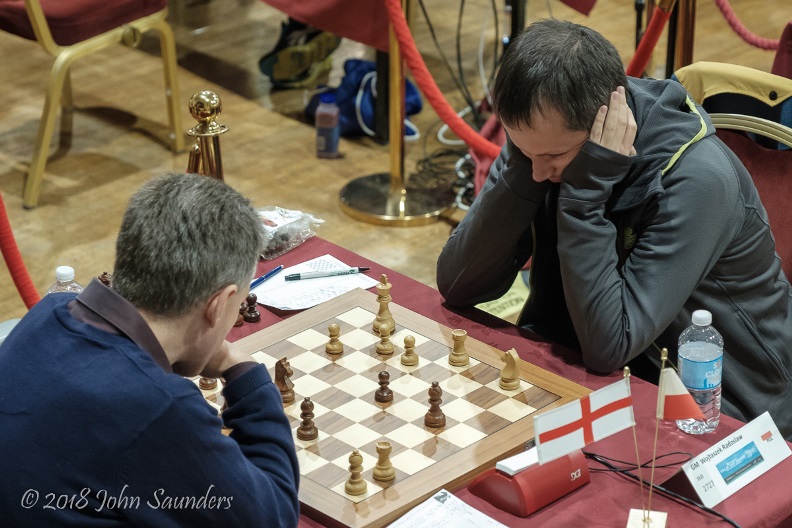 If Radek Wojtaszek can win on the Isle of Man it'll be an achievement to compare with winning Dortmund last year | photo: John Saunders, official website

Polish no. 1 Wojtaszek (a label we can use again after he gained 22.5 points in the Olympiad, European Club Cup and Isle of Man to climb to world no. 16) saw a novelty work in the way they sometimes used to a couple of decades ago, before computers made it so much harder to surprise your opponent with anything big. 15.Qb3 was an improvement on 15.Nd2 played in Gelfand-Adams in 2008, with Radek correctly guessing that although his opponent played in that game he might be rusty in such old theory. 15…Na5? was essentially the losing mistake:

16.Qb4! was winning an exchange, and after 16…Qxb4 17.axb4 e5 18.Bxa8 exf4 19.Rxa5 Bxd6 20.Rxa7 Bxb4 it was a question of whether Wojtaszek could convert his advantage. He could, and he looked to have an excellent chance of going into the final round as the sole leader. 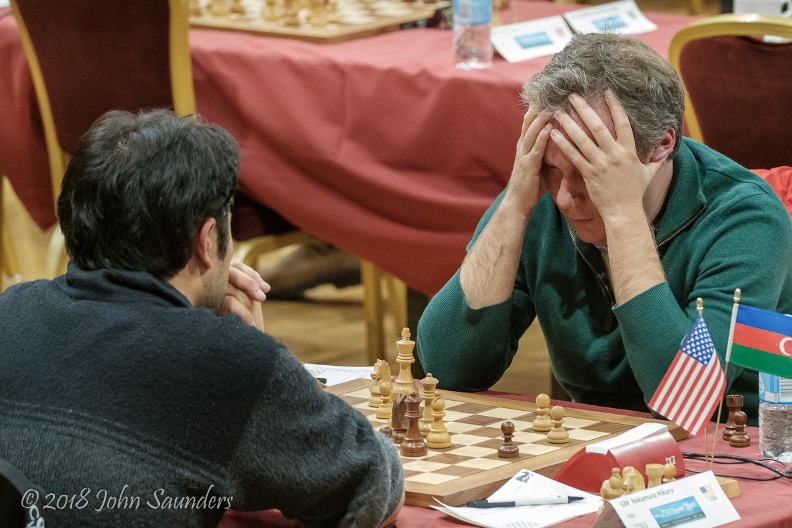 He didn’t, since Arkadij Naiditsch managed to beat Hikaru Nakamura. The US player choosing the 3…g6 Ruy Lopez was a sign of his desire to play for a win, but that soon backfired as he ended up down a pawn for no compensation. Desperate times called for desperate measures:

26…Bxh3!? objectively wasn’t much good, but Arkadij pointed out afterwards that being very short on time with Nakamura slamming down aggressive moves wasn’t a place you wanted to be. Inaccuracies saw a draw or even more within Hikaru’s grasp, but he let a big chance slip on move 35:

35…Nf4! 36.Rd7+! Qxd7! was seen by both players, but Arkadij admitted he’d overlooked something as simple as his g2-knight being pinned, while Hikaru had missed that after 37.cxd7 Nxe2+ 38.Kf2 Rd5 39.Kxe2 he had time to play 39…a6!, when he would be clearly better. Even without that move the position was much better than in the game after 35…Re5?, when Naiditsch went on to reach the time control intact and then rapidly convert his advantage afterwards:

Not a good day for the stars

If they wanted to fight for a share of the top prize most of the top players knew they needed a win in the penultimate round, but the likes of Vladimir Kramnik (vs. Jeffery Xiong), Anish Giri (vs. Richard Rapport), Vishy Anand (vs. Vladislav Artemiev), Alexander Grischuk (vs. Parligras), Sergey Karjakin (vs. Sethuraman) and Wesley So (vs. Alexei Shirov) were all held to draws. 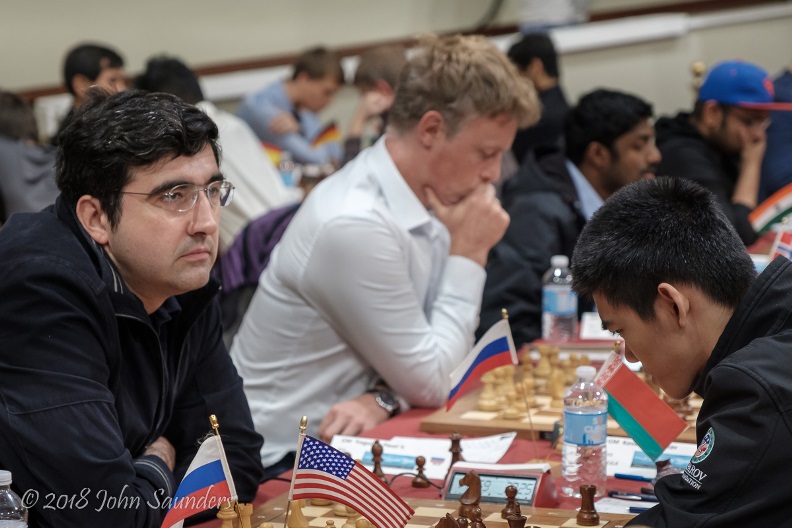 Vladimir Kramnik had another intriguing battle with another rising star, this time Jeffery Xiong, but he couldn't get the win he needed | photo: John Saunders, official website

It could have been worse, of course! Levon Aronian stopped for a 20-minute think in a topical Italian Game position and then made a couple of moves that worsened his position to such a degree that he was all but forced to give up the exchange a few moves later:

21…Qg5!? took Levon another 24 minutes, but it didn’t work out the way his exchange sacrifice had against Nigel Short the day before. His latest English opponent saw no ghosts and picked up material with 22.Bxf8! Rxf8 23.e6 Bc7 24.Kh1 Qe5 25.Bxb7!, correctly judging that Black’s attack could be beaten away. Soon the queens were exchanged and on move 51 Levon had no choice but to resign.

A happy Gawain noted afterwards that Levon was the highest-rated player he’d ever beaten. 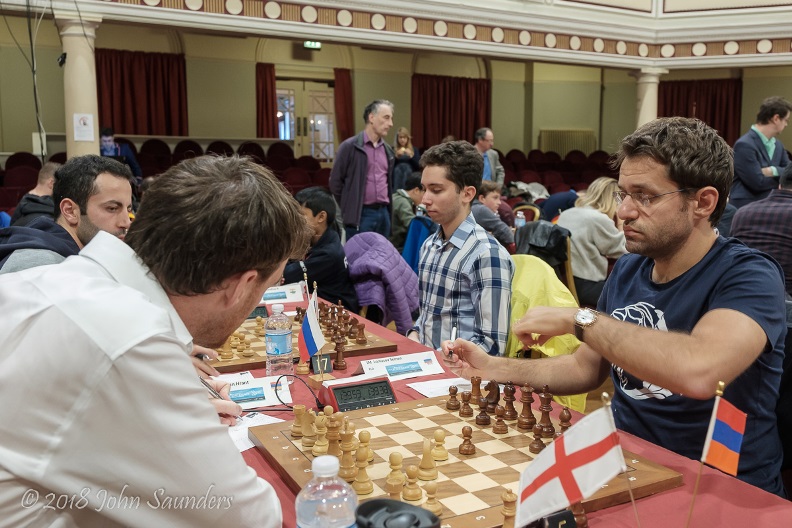 Top seed Levon Aronian is out of the running for winning the tournament | photo: John Saunders, official website

13-year-old Vincent Keymer, meanwhile, noted that technically Boris Gelfand (2701) wasn’t the highest-rated opponent he’d ever beaten (that was Richard Rapport at the GRENKE Chess Classic earlier this year), but in terms of chess status this was his biggest scalp yet. 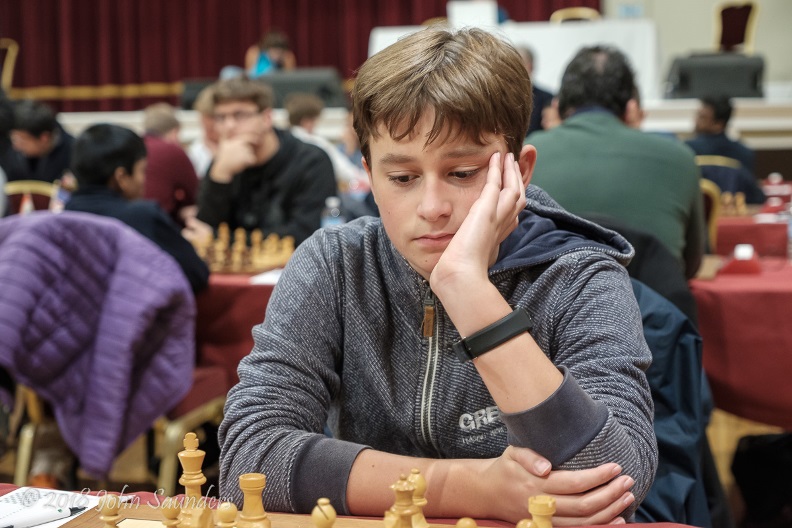 Will Keymer be Europe's answer to the incredible talents coming out of Asia? | photo: John Saunders, official website

Vincent was already a pawn up when took an inspired decision to give up his queen on move 39:

With a minute on his clock he wasn’t sure 39.Qxd8+! Bxd8 40.Rxd8+ Kg7 41.Bd4! was winning, but he could see he would at least draw. Instead it turned out he was winning, and in exquisite style – just check out the final position!

Vincent must be well on course for a grandmaster norm, which also goes for Alina Kashlinskaya. The wife of Radek Wojtaszek is threatening to make the prize ceremony a family affair, since while Radek could win up to £50,000, Alina is leading the chase for the £7,000 women’s 1st prize. She started the tournament with draws against Anish Giri and Vladimir Kramnik and has now beaten Grandmaster Rinat Jumabayev from Kazakhstan with the black pieces. 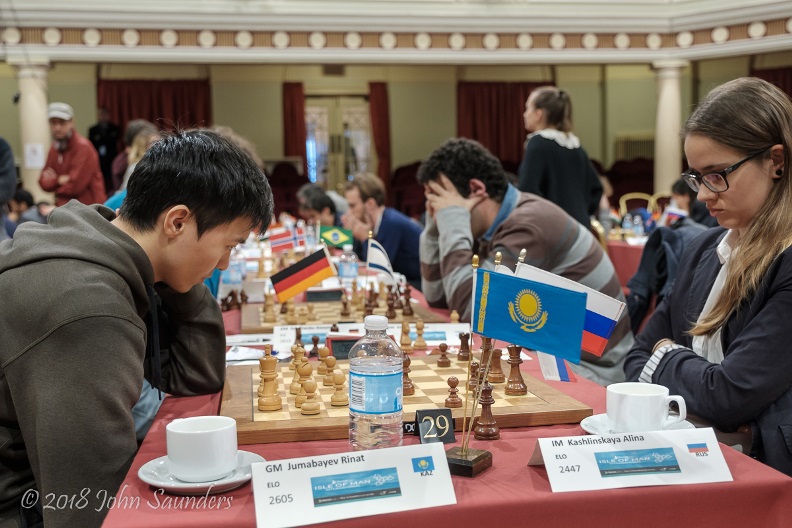 Alina has a half-point lead over Alexandra Kosteniuk going into the final round | photo: John Saunders, official website

It was a thoroughly convincing win featuring a nice final tactic:

The final round starts 1.5 hours earlier than usual at 14:00 CET, though for those who put the clock back one hour on Saturday night some of that time will be regained. Arkadij Naiditsch has White for the big showdown:

If there’s a winner in that top game he’ll win the £50,000 prize alone. If that game is drawn there’ll be a tie for first featuring up to five players, but while there will be a playoff to decide who gets the trophy, the prize money will be split equally.