Mickey Adams beat Abhijeet Gupta in Round 7 of the Chess.com Isle of Man International to join what is now a group of seven leaders on 5.5/7 going into the final two rounds. Despite some thrilling fights the top six boards were all drawn, but Anish Giri, Levon Aronian, Alexander Grischuk and Alexei Shirov all won to join the likes of Sergey Karjakin, Vishy Anand and Vladimir Kramnik just half a point off the lead. 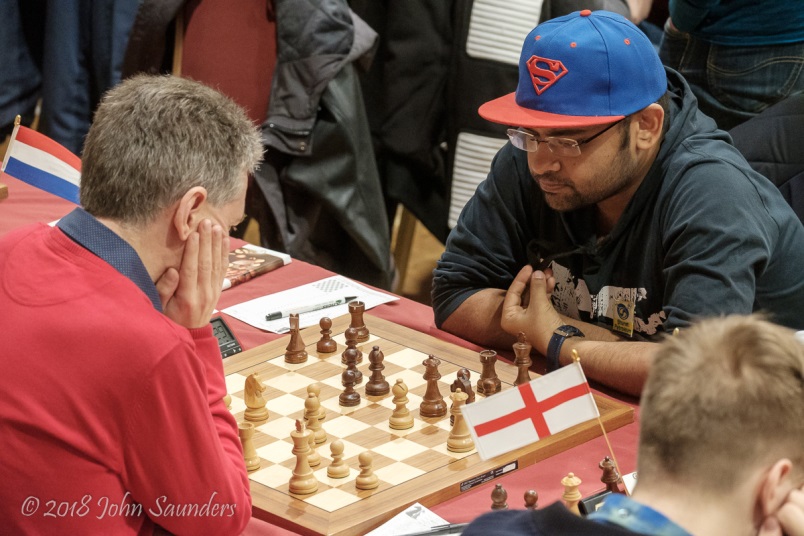 You can check out the pairings and replay all the game from the Isle of Man using the selector below: 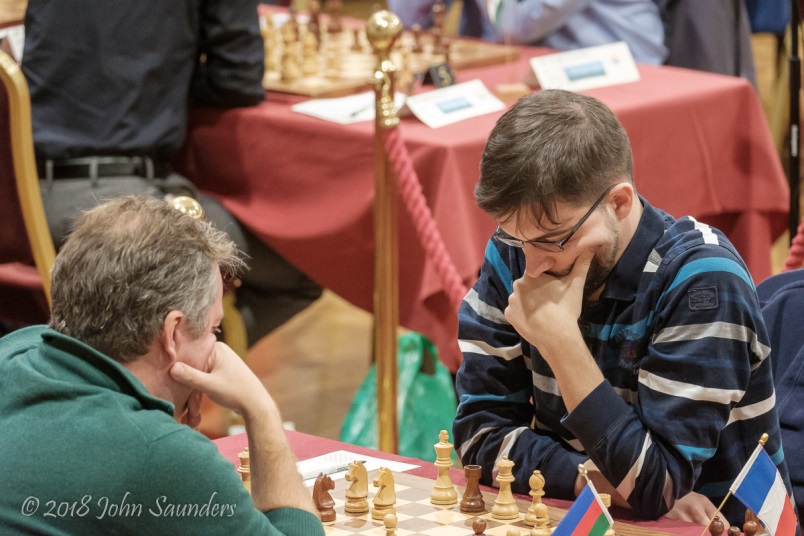 It seemed as though the tone for Round 7 was going to be set by Maxime Vachier-Lagrave, who with 17.c4! looked ready to cash in after the loose way in which Arkadij Naiditsch had played an Anti-Berlin:

Here it was Maxime’s turn to think for 21 minutes over how to recapture. Black’s compensation comes from the exposed nature of White’s king, but 21.Kxe1 may still have been the stronger move. Instead Maxime went for 21.Qxe1 and decided to take a draw by repetition after 21…Qxd5 22.Qe4 (e.g. 22.h3 and the game would go on, though there’s at least no easy win for White) 22…Qd1+ 23.Qe1 Qd5. 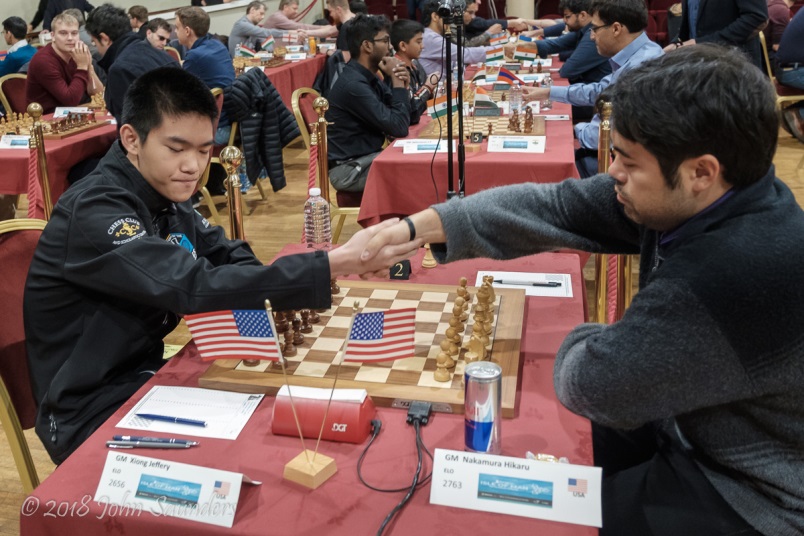 Is this going to be another big US rivalry in years to come? | photo: John Saunders, official website

That surprising conclusion did in fact set the tone for the round, at least at the top, with exciting battles ending in draws. Nakamura-Xiong was already a grudge game, with 17-year-old Jeffery Xiong having the winning chances before saying afterwards that Hikaru Nakamura’s comments on his “soft pairings” hadn’t bothered him but were, “more insulting to my opponents”.

That was a US case of master and apprentice, while in the Russian version Vladimir Kramnik managed to create one of his famed passed pawns against Vladislav Artemiev, giving him a close to winning position. He didn’t find the right way to blunt his 20-year-old opponent’s kingside attack in time trouble, though, and ultimately not only lost the passed pawn but ended up a pawn down. That’s a bad place to be against Artemiev, whose rise to the top has been based on grinding out tiny advantages in endgames, but Vlad held on against Vladislav in 64 moves.

That would be nothing to Gawain Jones, who after saving a draw in 113 moves against Mikhail Antipov in Round 5 needed a mere 102 moves to hold on a piece down against Richard Rapport:

English GM Mickey Adams took full advantage of the draws by beating Abhijeet Gupta in a long grind that brought him into the leading pack. Spiderman had defeated Superman!

There were more wins further down the pairings list, with some star names moving to within half a point of the lead before the final weekend. Anish Giri convincingly beat Antipov on the black side of a 3.Bb5 Sicilian, while Levon Aronian ended the fine run of Nigel Short:

Levon’s trick was perhaps to play the opening hyper-provocatively, encouraging Nigel - correctly! - to expand with the black pieces, until perhaps he finally went too far:

15…g4!? was a risky move, seizing control of the f3-square at the expense of giving White f4. Later it was White’s 25.g4! that seemed to all but decide the game: 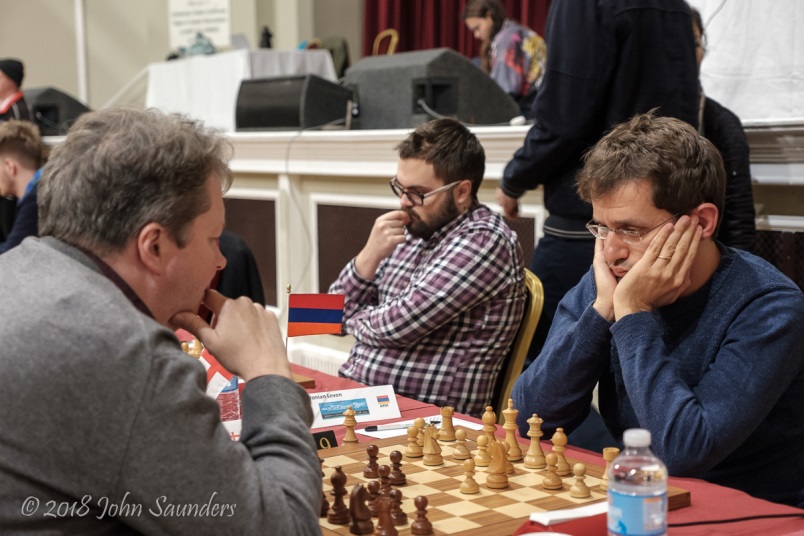 Aronian-Short was one of the day's most entertaining games | photo: John Saunders, official website

Giri and Aronian both now have three wins and four draws, as does Alexander Grischuk, who crashed through against Rinat Jumabayev in deep mutual time trouble: 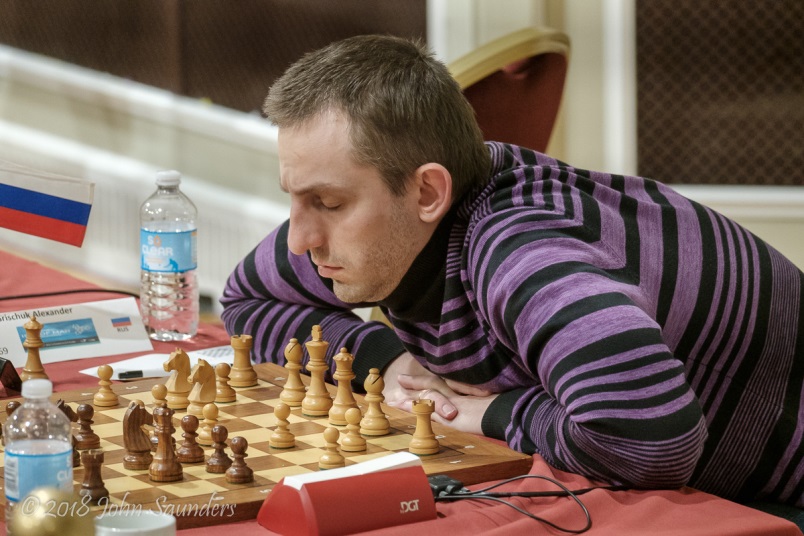 Alexei Shirov lost a game to Hikaru Nakamura after an ill-fated exchange sacrifice, but he’s now won the two games before and after that to reach 5/7 as well. Again there was an exchange sac, but this time the most memorable moment of the game was 2715-rated Vietnamese GM Le Quang Liem deciding to castle on move 36!

It would have been a better story to tell his grandchildren if it hadn’t been losing on the spot to 37.Nxe5! when Black couldn’t capture on e5 since White would force mate with 38.Qg3+!. Le Quang Liem instead went for 37…Kh8, allowing the 38.Nd7 fork, when his 38…Rxb3 was a spectacular attempt to confuse matters, but one that also didn’t work. Resignation came only on move 56, but the contest had effectively been over long before that.

English GM Simon Williams is famous for his love of pushing Harry the h-pawn, and in Round 7 he found himself in a dream situation with two h-pawns wreaking havoc: 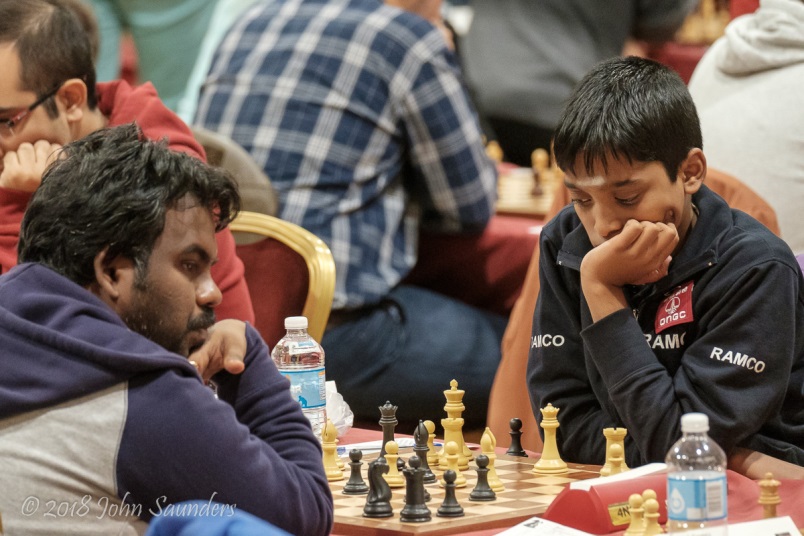 Praggnanandhaa beat compatriot Ravi in fine style. Although the loss to Vidit put a dent in his tournament he's still performing above grandmaster norm level - not that he needs such things anymore! | photo: John Saunders, official website

Meanwhile 13-year-old Praggnanandhaa was just off the live boards in Round 7, which deprived us of watching a brilliant attacking game live.

15.Rxf7! was just one of many “boom!” moves. You can play through the full game with computer analysis and the option to try out your own moves here. 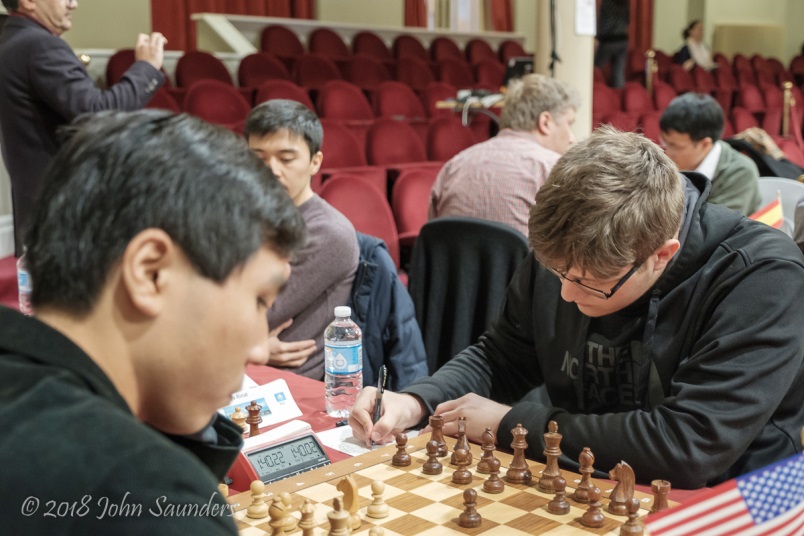 Pragga's opponent in Round 8 is Sam Sevian, who had Wesley So on the ropes in Round 7 before their game ended in a draw | photo: John Saunders, official website

So things are now heating up as we enter the last two rounds, though so far none of the very top stars have been paired against each other (in this round a year ago it was Caruana-Carlsen!):

Whatever happens, we can be sure today’s games will set up a last-round thriller! Follow all the action live here on chess24 from 15:30 CEST!