Hikaru Nakamura ended the giant-killing run of Abhijeet Gupta as the race for the £50,000 top prize in the Chess.com Isle of Man International heats up. He’s joined in the six-player leading pack on 5/6 by Maxime Vachier-Lagrave and Radek Wojtaszek, who both won nice games, and Wang Hao, Jeffery Xiong and Arkadij Naiditsch. Just behind them on 4.5/6 are Vladimir Kramnik and Vishy Anand, who won after their rest day, and Sergey Karjakin, who saved a seemingly hopeless position against Mircea-Emilian Parligras. 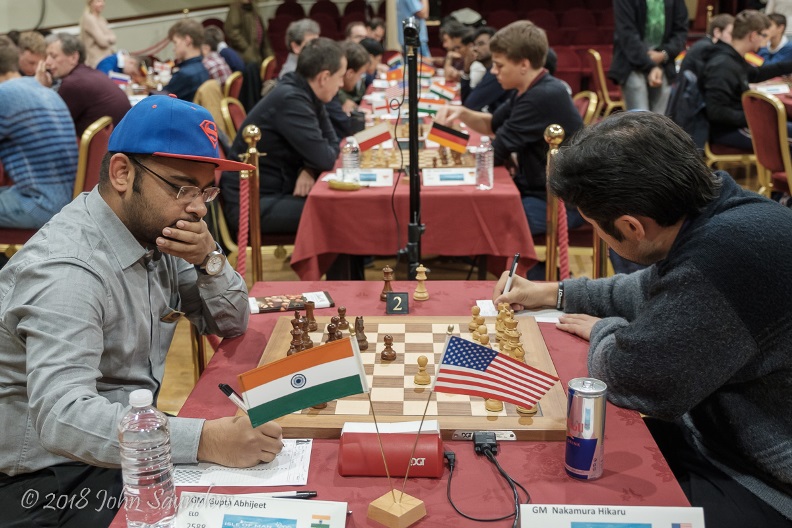 You can check out the pairings and replay all the games from the Isle of Man using the selector below:

As the tournament enters the final stages some of the favourites made their move on Thursday. Of the four leaders going into Round 6 one of them, Arkadij Naiditsch, took a half-point bye on his birthday, while another two, Jeffery Xiong and Wang Hao, played out a hard-fought draw. 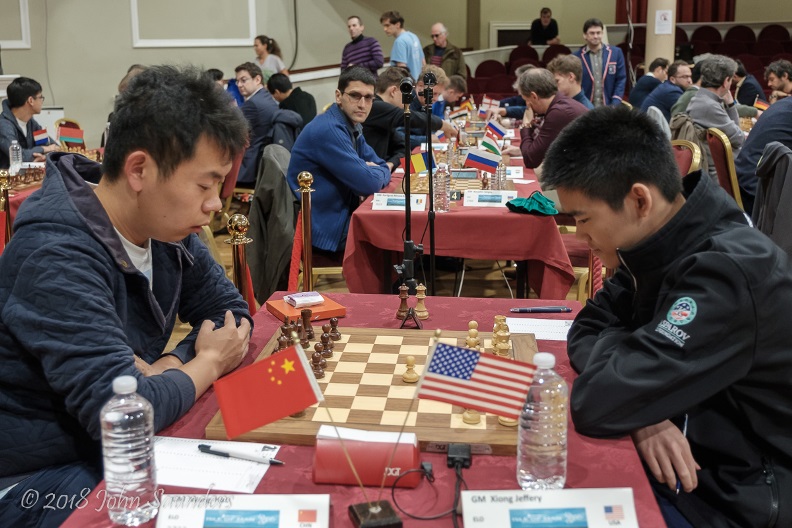 That was a chance for the chasing pack, and particularly for Hikaru Nakamura, who had the white pieces against the other leader, Abhijeet Gupta. 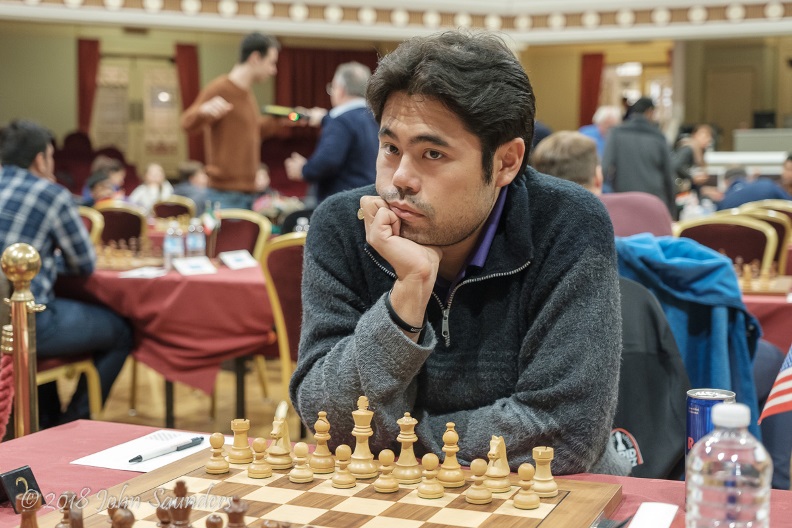 Hikaru Nakamura, a 4-time winner in Gibraltar including doing it 3 years in a row, knows exactly what it takes to win an open tournament | photo: John Saunders, official website

Gupta followed the same script as on previous days by donning his Superman cap, but there was to be no hat-trick of wins over 2700 players. His aggressive play with the black pieces never quite convinced, and the final sequence of exchanges was refuted by the sting in the tail 28.Nd4!

Hikaru was feeling confident after a third win in a row and, when asked about his high-flying compatriot Jeffery Xiong, noted that the youngster had had some easy pairings. It seems Hikaru had forgotten about Maxime Vachier-Lagrave!

Of course Hikaru was right to note that some players – he mentioned Levon Aronian – had faced very tough opposition, while Nigel Short’s reward for now having drawn against Karjakin, Grischuk and So is to face Levon next:

And, of course, Hikaru’s next opponent is… Jeffery Xiong! 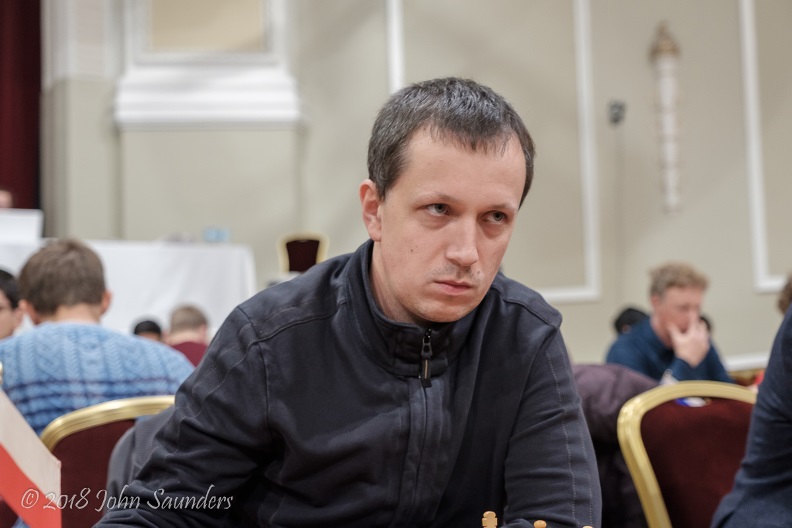 Radek Wojtaszek explained taking a bye the day before by his tough schedule - first the Olympiad and European Club Cup, now the Isle of Man, and almost immediately after it finishes he's flying to China to play in the Shenzhen Masters supertournament | photo: John Saunders, official website

Two other 2700 players joined Hikaru in the lead. Radek Wojtaszek came back after a rest day to face young German talent Rasmus Svane. In the previous round Rasmus had embarrassed former World Championship challenger Boris Gelfand:

This time, though, he was on the receiving end. Countless millions of chess games have been decided by a pawn capture on f7, but this was a particularly attractive example:

After 22…Qxf7 23.Nxf7 Kxf7 the fork 24.Nd6+ would decide the game. Rasmus stumbled on with 23…Rf8 instead, but he couldn’t change the inevitable outcome. 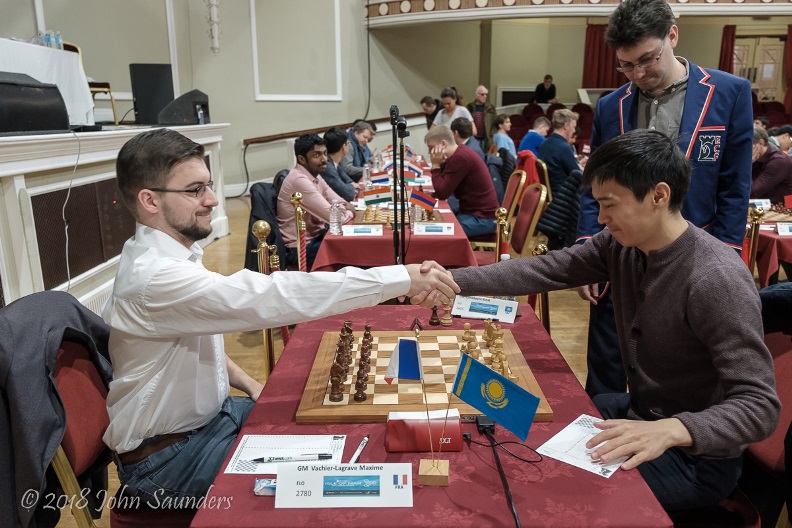 Meanwhile Rinat Jumabayev from Kazakhstan took on Maxime Vachier-Lagrave in a hyper-sharp position, which ended as it usually does. Although at times White was doing well, the French no. 1 crashed through in his opponent’s time trouble. 33.f4? was a losing move played with 17 seconds on the clock:

33…Rxb2!, ignoring the threat, must have been a hammer blow, and with no time to think White collapsed with 34.Nf1 Nxe4 35.fxe5 dxe5 36.Ng3 exd4 to leave a picturesque final position:

Anand and Kramnik in the hunt

There are 11 players just half a point behind the leaders, including former World Champions Vishy Anand and Vladimir Kramnik, who had both decided to take a half-point bye the previous day. Vlad explained that at their advanced age they needed a rest if they were going to last 9 rounds, and they’d also reasoned that they were likely to be paired against tough opponents with Black, so a half-point was the likely outcome in any case. 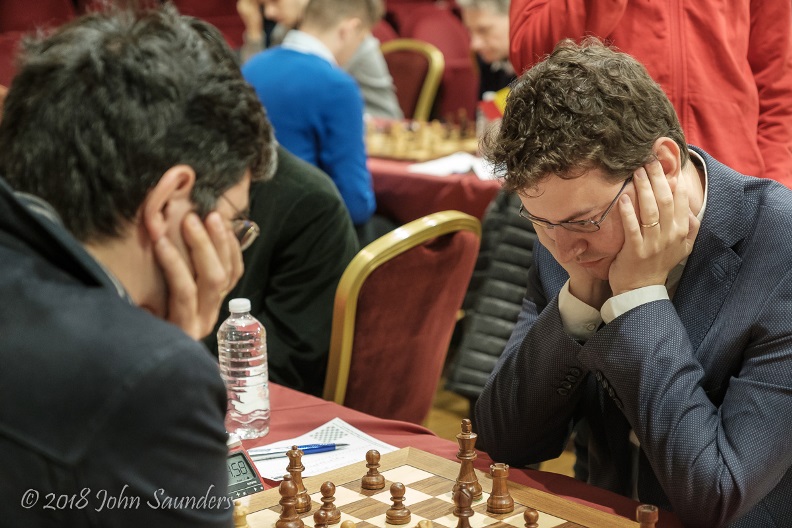 Some vintage Kramnik on the Isle of Man | photo: John Saunders, official website

They both got White in Round 6, and Kramnik in particular got to enjoy himself. He faced Erwin l’Ami, whose attempted attack with the black pieces only ended up with the loss of two pawns. Since those extra pawns were connected passed pawns on the d and e-files you didn’t need to be Nostradamus to predict the outcome of the game. It was still beautiful, though, as Vlad ended with a queen sac…

…and Erwin obliged by allowing the most fitting finish:

Vishy Anand’s 72-move grind against Daniel Fridman’s Petroff isn’t going to feature in any best game collections, but it might prove just as important. 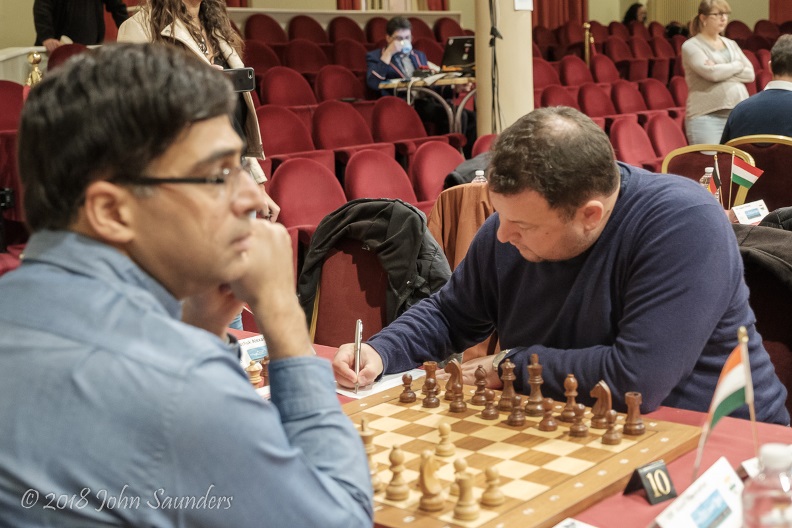 Meanwhile Sergey Karjakin is also on 4.5/6 after drawing against Mircea-Emilian Parligras, but it’s no surprise he’s now taken a bye for Round 7. After an epic win in the previous round he needed all his Minister of Defence acumen to hold a position two connected passed-pawns down that some players might simply have resigned in disgust:

It wasn’t a flawless defence, since when Karjakin had already achieved a drawn position he went on to allow his opponent some tablebase wins, but in 91 moves he’d more than earned the half point he achieved. 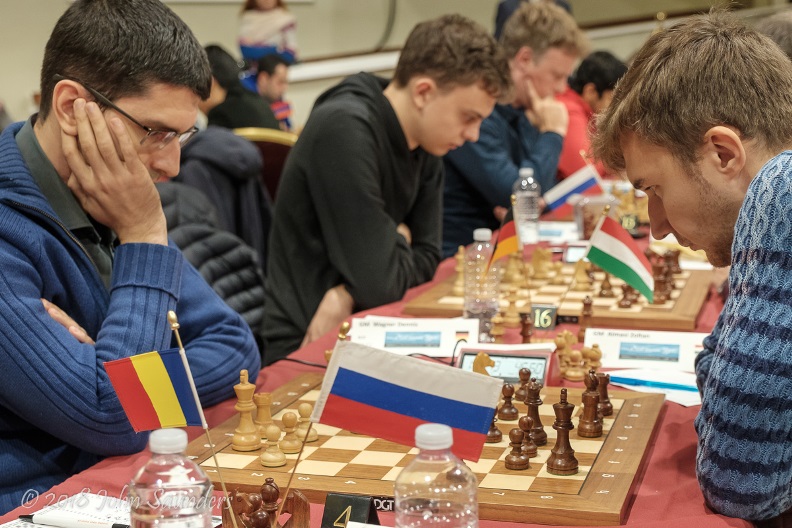 Karjakin's defence of a hopeless position was almost as impressive as his mating with two knights the day before | photo: John Saunders, official website

The standings at the top look as follows after 6 rounds, with Levon Aronian, Anish Giri, Wesley So and Alexander Grischuk among the 20 players a half point back on 4/6:

Let’s end with a couple of blunders, since nothing else brings the average chess fan closer to the stars of the game! Glenn House was a giant-killer in Rounds 1 and 3, but in Round 6 he suffered his third loss in a row, to fellow Englishman Lawrence Trent: 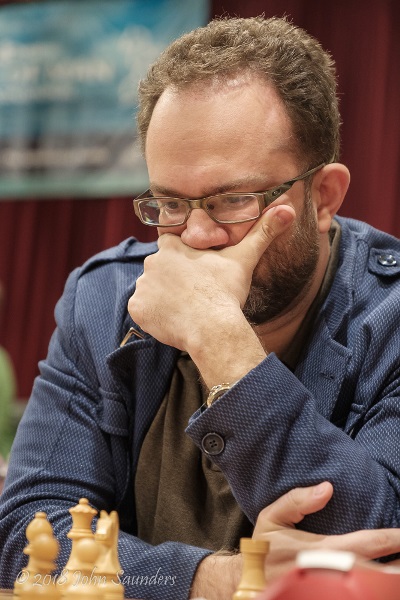 It's been a tough event for Pavel Eljanov! | photo: John Saunders, official website

Glenn is a 2180-rated FM, but no-one is exempt from blunders! 2703-rated Grandmaster Pavel Eljanov from Ukraine would have sealed victory against German IM Ilja Schneider with 41.Qb8!, or various other moves. Instead he chose 41.Nb8?

The pairings for Round 7 promise more entertainment as the players jockey for position going into the final two rounds: