'I felt like a God!' — Magnus Carlsen on the time he tried a minibar gambit

World Chess Champion Magnus Carlsen made an appearance on Norwegian comedian Morten Ramm’s podcast earlier this week, where he spoked about the 2012 World Rapid & Blitz Championships in Astana, Kazakhstan. Magnus revealed that he turned around what he considered a disappointing performance by hitting the mini-bar. Don't try this at home!

"That hour went fast," Magnus tweeted about the podcast

In the rapid section, Carlsen finished second behind Sergey Karjakin after leading for most of the event. The night before the final day, he reveals he didn't sleep well due to a bad stomach.

I was leading after two days, then ate a horrible dinner, and couldn’t sleep. My stomach went to hell and I messed up on the last day and finished second.

A disappointing performance by the standards of the 21-year old world #1, who was in a bad mood before the World Blitz Championship. He noted the first day of the blitz didn’t go well either.


I remember people who went up to the printed standings and needed to take another look because, “could it really be correct that he had done so damn poorly?”

I had won one more game than I’d lost and I am around mid-table and way behind.

What happens is that I figure there is only one thing to try out. I go up to my room, open the mini-bar and take the bottle of Russian or Kazak vodka that I find and drink as much as I manage in 15 minutes.

Carlsen says that when he returned to the playing hall people started to wonder why he now out of the blue seemed to be in a joyful mood after appearing annoyed for days. Opponents were also wondering why he was playing “so damn fast and confidently!”

I win eight games in a row easily without any fight at all. I finished second. I couldn’t catch the leader, and ended half a point behind after being four points behind.

Magnus may have misremembered the order, but he did indeed win his final 8 games of the 30-round tournament!

At that moment, I felt like a God. I had a good “buzz” and thought I played incredibly well and also so fast. Having looked at it afterwards, I didn’t really play that well (laughs). But apparently I managed to psych them out completely.

The final standings looked as follows.

Carlsen’s unusual step seems to be a closed chapter. In an interview with NRK at the end of last year, the World Champion revealed that he had stopped drinking completely, which could partially explain why he had his best year ever.

I wouldn’t say I was an alcoholic exactly, but I found out this year, if I’m going to travel and play a lot […] I need to prioritize differently.

Carlsen also spoke about his strong opinions on various topics:

I am not trying to create a fuss. It’s not too much, but in general I speak my mind about how I feel and do what I want.

I am not a very friendly guy. I can be, but naturally I am a bit introverted and that makes it a bit harder to be taken as a nice, sparkling and jovial person! (laughs) 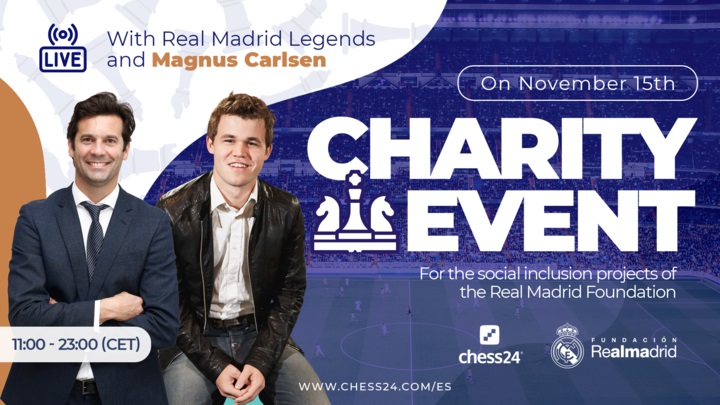 Magnus will be back on chess24 on 15th November when he takes part in a charity event co-organised by Spanish football team Real Madrid. Read more details here.