The year is 1935. Salo Flohr has just won the 2nd Moscow International Tournament in front of Mikhail Botvinnik, Emanuel Lasker, and Jose Raul Capablanca. The late Yuri Averbakh is 13 years old. He knows the rules of chess but is not an enthusiast yet. A lecture by Nikolai Grigoriev is about to give birth to a love for chess that will dictate each day of the 87 years that Averbakh has left to live. 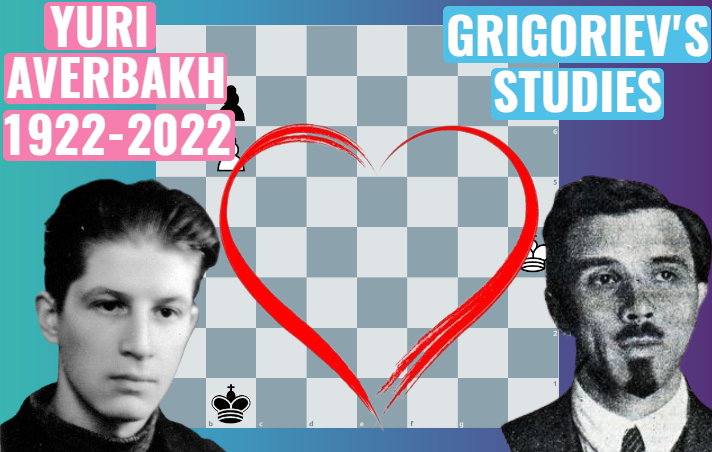 Here is what Yuri said about this budding love in his book Selected games:

Late in 1935 I visited the Moscow Chess Club for the first time, and there I was fortunate enough to listen to a lecture by the great endgame expert Nikolai Grigoriev. It made an indelible impression on me. When Grigoriev explained his pawn studies, moving the pieces on the demonstration board with his thin, artistic fingers, I sensed, rather than understood, the great depth and beauty of chess, observing with my own eyes how human thought spiritualises these little wooden pieces, and they, like real actors, begin performing miraculous spectacles, capable of touching the most sensitive parts of the human soul. It was this perception of chess as an art that finally linked me with it. I wanted to understand chess and study it.

Yuri Averbakh passed away on May the 7th. If you want to know more about his incredible life devoted to chess, I invite you to read the article I wrote on his 100 birthday. This article will show you some of Grigoriev's best studies that made Averbakh fall in love with chess.

If you prefer watching videos to reading, I present all the content in this video of my YouTube channel.

I will proceed in order of increasing difficulty and start with three positions that should be displayed in every good book on endgames.

A perfect example of distant opposition!

1.Ke7! taking the distant opposition (both kings are on the same line, separated by an odd number of squares.)

White to play and ?

n.b. this is the position after move 7 of the study.

For this study, I am breaking the rule of announcing what White should do.

After 5...Ka6. Mutual zugzwang with White to move.

We established that White couldn't win, so let's try to draw. Black will play Kxb6 sooner or later, to which White has to answer with Kb4, to take the opposition and prevent Black from reaching the key squares.

The shortest distance between two squares is not necessarily a straight line!

The attentive reader will have noticed that the heart on the thumbnail corresponds to the white king's road to b4.

n.b. this is the position after the 1st move of the study.

Now 2.Kf7? g5! leads to the same draw as before, and 2.Kg7? g5! would see White's king in the way of the pawn. Here, Sherlock Holmes would explain that, "when you have eliminated all which is impossible, then whatever remains, however improbable, must be the truth."

For two moves, White just passed while Black moved a pawn forward and gained another tempo. This is why he is lost. If only he could play g6-g7, he would draw. Instead, he can resign.

White to play and win

1.b4? Ka6 draws as Black simply keeps the opposition.

As long as Black keeps the opposition, he is fine. It takes quite the journey to make him lose it!

White to play and win

n.b. Pal Benko later added the Black pawn on g3 to prevent an alternative solution at the end.

Black is ready to promote his d7-pawn with check in 5 moves. The only way to prevent this is to threaten to promote the f-pawn, as it would also be check. 1.f4! Black's king has to enter the pawn's square.

In 1961 Boris Spassky left his previous trainer Alexander Tolush for Igor Bondarevski. In one of their first sessions, Bondarevski gave Spassky this study by Grigoriev. Boris sat in silence for 20 minutes before exclaiming, "Qg2!".

Since then, it has been Spassky's favorite study, and he showed it to many grandmasters, Bobby Fischer included. Bobby was puzzled. The next day Bobby phoned Boris, said "Qg2!", and hung up. (Story told by GM Andy Soltis in Chess Life, August 2016) So what is this mysterious "Qg2!" about?

I had established the above selection of studies in the hours after the heartbreaking news of Averbakh's passing. Among the numerous masterpieces that I did not pick, one study ended with this mutual zugzwang.

The end of a study by Grigoriev.

A couple of hours later, I was shocked when Aronian managed to get a similar position after being lost since the opening. I was happy to be probably the third person who understood that it was also a zugzwang (the first being Levon and the second Alireza).

Who still doubts the practical value of studies?

Back to 1935. In the following 87 years of his life, the new chess lover will become Grandmaster, USSR Champion, second of several World Champions, World Championship arbiter, President of the Soviet Chess Federation, successful author, recognized historian, and, of course, study composer, like his mentor.

Unfortunately for chess, the 4-time Moscow Champion, tournament organizer, journalist, and genius composer, Nikolai Grigoriev, wouldn't have the same longevity. At the age of 43, he tragically died from cancer aggravated by the torture inflicted by the NKVD, the Soviet secret police. His studies remain immortal.