Women’s no. 1 Hou Yifan won her last three games to take clear first place in Biel, becoming the first woman to win the top prize in the Biel Chess Festival’s 50-year history. Her 2809 performance featured five wins and a tactical shot that will become an instant classic. Second place was taken by Etienne Bacrot, who in the final round inflicted the first defeat of the tournament on Harikrishna. The Indian Grandmaster had to settle for 3rd place. 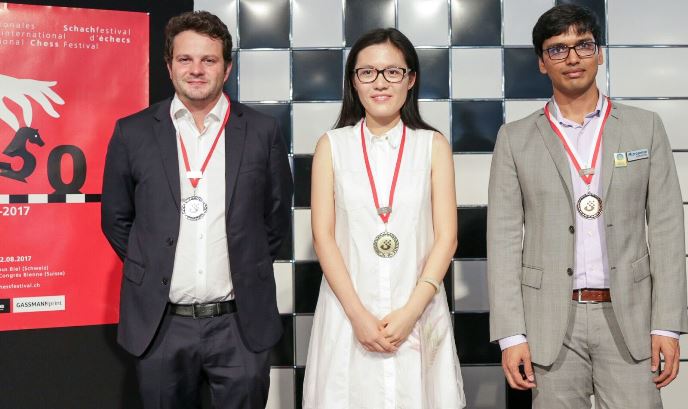 When we last reported on Biel on the rest day Hou Yifan was half a point behind Etienne Bacrot in clear second place. In Round 6 her hopes of tournament victory suffered a huge blow when she lost a tricky queen + rook position to Harikrishna, but it turned out that was just a temporary setback before a storming final three rounds! 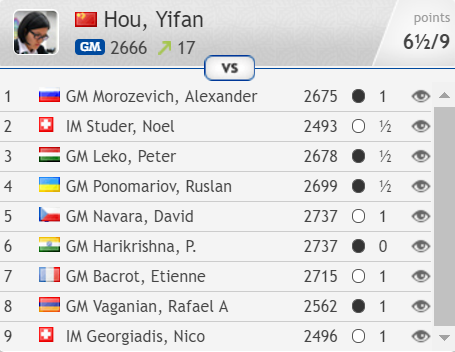 You can play through all the games from Biel using the selector below – click a result to open the game with computer analysis:

Let’s take a quick look at the final three games:

This was the result that blew the tournament wide open, with Hou Yifan beating the leader, who up to this point had three wins and three draws. 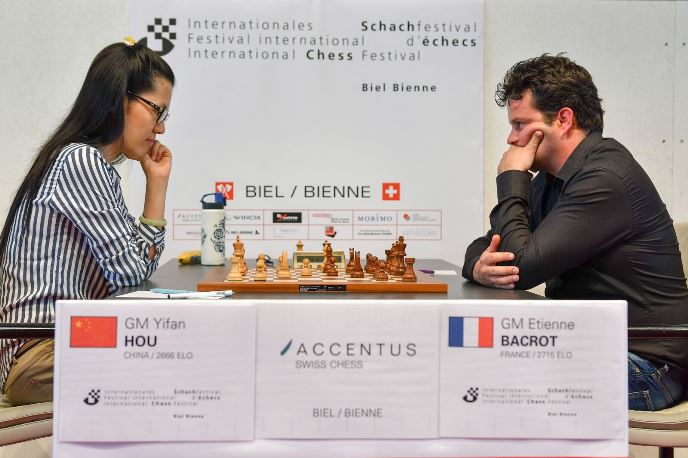 Hou Yifan dashed Etienne Bacrot's hopes of winning the title not just here but in the last round as well | photo: Biel International Chess Festival

The French Grandmaster was defending a position as difficult as Yifan’s the day before, when he finally cracked with 35…Rd8?:

In the same round Alexander Morozevich beat Ruslan Ponomariov to hurt the Ukrainian’s challenge and boost his own. 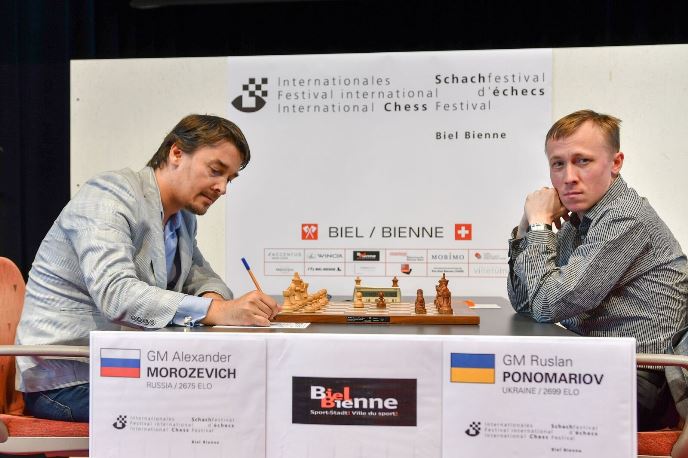 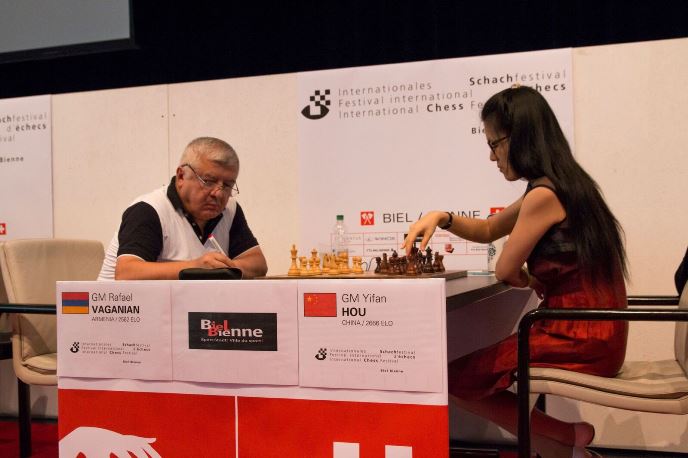 65-year-old Rafael Vaganian got to contribute something more to chess history, but he was on the wrong side of the board | photo: Biel International Chess Festival

This is the game that will be remembered from this tournament, since it featured a relatively simple but still beautiful tactical theme:

The Chinese star was eagle-eyed enough to spot 20…Bxg2!! 21.Kxg2 Qxd4!! and now 22.exd4 would have allowed Yifan to demonstrate the point: 22…Nf4+!, winning back the queen. Rafael Vaganian is a chess legend and tried to mix things up with 22.Qxg6 but the response was flawless: 22…Qd5+ 23.e4 fxe4 24.Qxe4 Qg5+ 25. Kh1 Qxd2. Vaganian was temporarily able to harass the black king, but the extra exchange proved decisive.

Morozevich won again to move into touching distance before the final round, while Harikrishna beat Ponomariov to join Hou Yifan in the lead on 5.5/9. 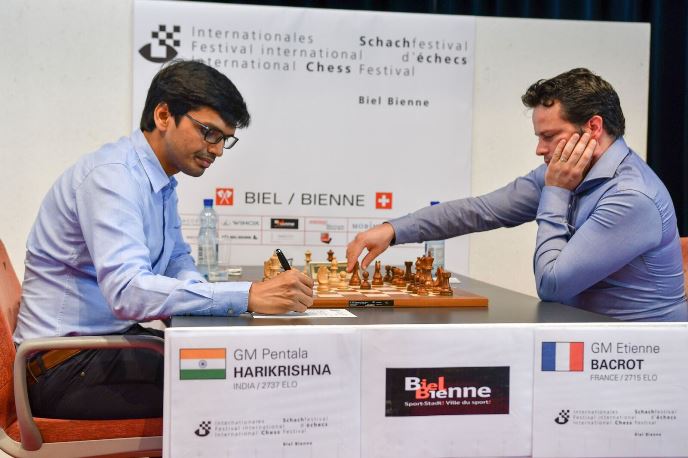 Harikrishna entered the round as the favourite to win the title, but it couldn't have gone much worse for him | photo: Biel International Chess Festival

All five games were decisive on a thrilling last day, which went wrong fast for Harikrishna when he played the calamitous 21.Bc5??

White would live to fight another day if the black rook moved, but Etienne played the winning 21…Bxf5!, when the misplaced bishop means 22.Qxf5 loses instantly to 22…Rd5. In the game we got to see the problem with 22.Nxf5, which ran into 22…Qh2+ 23.Kf1 Rd2! and Black had a ferocious attack without the need to invest any material. Given the tournament situation Hari played on, but it was a forlorn struggle. 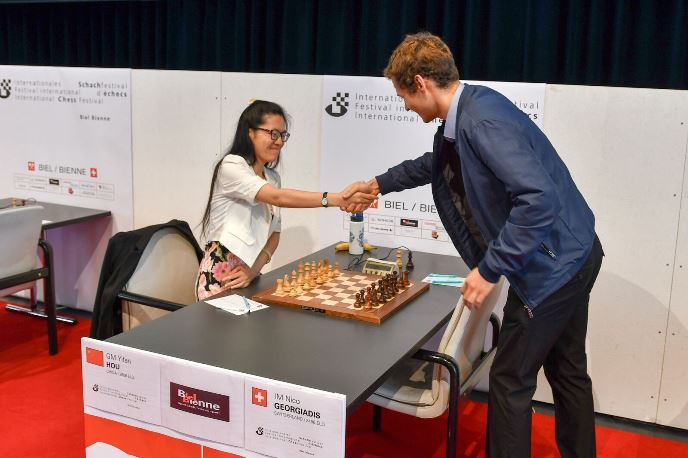 21-year-old Nico Georgiadis said he couldn't have dreamt he'd score 5/9 in this company, but it could have been better as he entered the last round unbeaten | photo: Biel International Chess Festival

That meant Bacrot was in first place with 6/9, and since Hou Yifan was struggling against the previously unbeaten Nico Georgiadis the question was what would happen if she nevertheless drew and the title would be decided on Sonneborn-Berger tiebreakers. The consensus seemed to be that she would prevail (if that tiebreaker was equal she would win the tournament due to beating Bacrot in their individual game), but it was far from certain. Remarkably fast, though, things turned around after Yifan played 15.Be3:

Nico ignored the positional threat and played 15…Ba6?!, a move that would have been strong one move earlier, but now allowed 16.Bxc5! dxc5 after which it was just a question of whether White would win or draw. From that point on the women’s no. 1 was imperious, and exploited her opponent’s inaccuracies to win a pawn and soon the game. She’d done it! 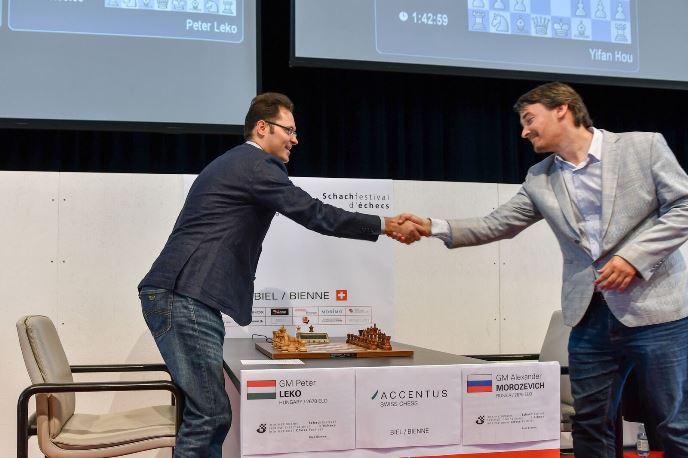 Elsewhere Peter Leko ended a very mixed tournament on a high by grinding out a win against Alexander Morozevich in 66 moves and many hours, while Ponomariov joined him on +1 by beating the luckless Noel Studer. The story, though, was all about Hou Yifan!

Her result was one of the best ever achieved by a female player, with Judit Polgar’s joint 1st with Shakhriyar Mamedyarov in the 2006 Essent Chess Tournament one of the last comparable results (she twice beat then world no. 1 Veselin Topalov in that event), while Judit also tied for 1st in the 2011 European Championship, though she eventually took bronze behind Potkin and Wojtaszek on tiebreaks. If we allow speed chess into the mix, then Valentina Gunina’s brilliant 9/10 at last year’s London Super Rapidplay needs to be mentioned as well.

We should perhaps, though, simply look at her result as that of a promising young player who is struggling to make the next step to the very top:

She’s had a turbulent year, with results such as beating Fabiano Caruana at the GRENKE Chess Classic and finishing 3rd with a 2770 performance rating in the Moscow Grand Prix mixed with the shock end to the Gibraltar Masters and her poor recent performance in the Geneva Grand Prix. That meant that the 17 rating points gained in Biel only brought Yifan back to 2669.6, 16 points below her peak rating of 2686 in March 2015. That was one of the reasons she was keeping her feet very firmly on the ground in the post-game press conference:

If you want the short version!

There are still only half a dozen players younger and higher rated than Hou Yifan, so let’s hope this is the start of a new rise! We’ll next see Yifan in action in the World Cup next month.