Women’s no. 1 Hou Yifan will be the first female player to participate in the full Meltwater Champions Chess Tour when the Goldmoney Asian Rapid, the 7th stage on the $1.6 million tour, starts at 13:00 CEST on Saturday June 26th. The earlier starting time should boost the chances of the players based in Asia, with no less than four Indian grandmasters taking part, including 15-year-old Gelfand Challenge winner Gukesh and 17-year-old Indian Qualifier winner Arjun Erigaisi. There are also tour debuts for Adhiban, Vladislav Artemiev and Salem Saleh. 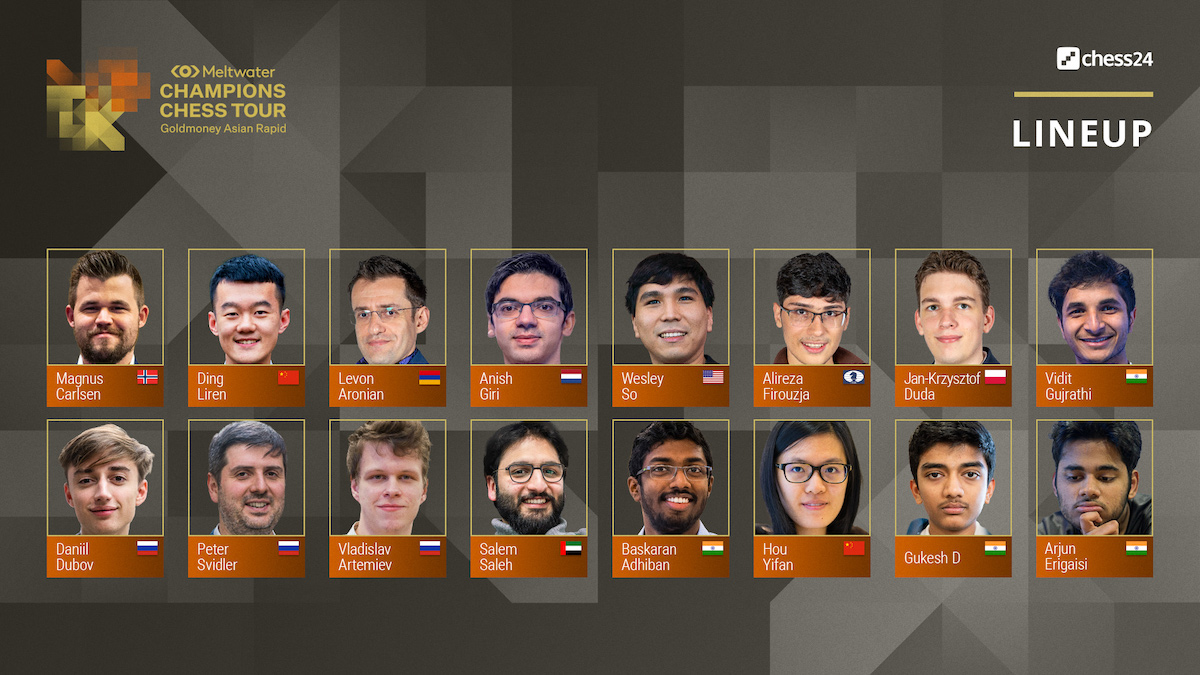 Although the 4th Regular Event on the Meltwater Champions Chess Tour is still formidably strong — featuring World Chess Champion Magnus Carlsen, half of the Top 10 and the world’s top junior, Alireza Firouzja, it’s also going to be a chance to see some new faces do battle online.

We’re thrilled that women’s no. 1 and 4-time Women’s World Champion Hou Yifan has agreed to play, with the Chinese star making her debut in an event that also features Chinese no. 1 Ding Liren. 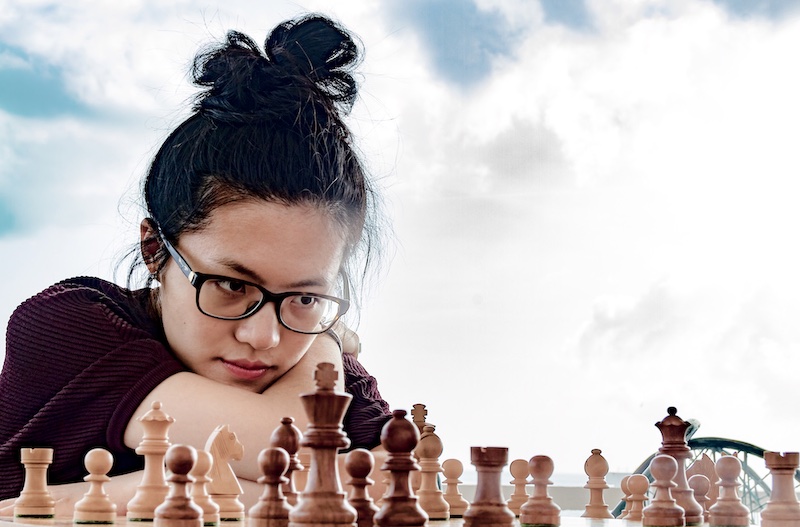 The biggest contingent of players comes from India, with returning tour player Vidit joined by three newcomers. Adhiban's chess24 username fireheart92 sums up his play and character perfectly, and he booked his place by reaching the final of the Indian Qualifier. 15-year-old Gukesh shot to fame as a 12-year-old when he came within 17 days of breaking Sergey Karjakin’s record as the youngest ever grandmaster, and plays after winning the Gelfand Challenge with a spectacular final day. 17-year-old Arjun Erigaisi is more of an unknown quality, but was hugely impressive in the Indian Qualifier, where he beat Adhiban in the final.

The other new faces are 23-year-old Russian rapid and blitz specialist Vladislav Artemiev, and former Asian Chess Champion Salem Saleh from the United Arab Emirates, where Magnus Carlsen and Ian Nepomniachtchi will play their World Championship match in Dubai this November. 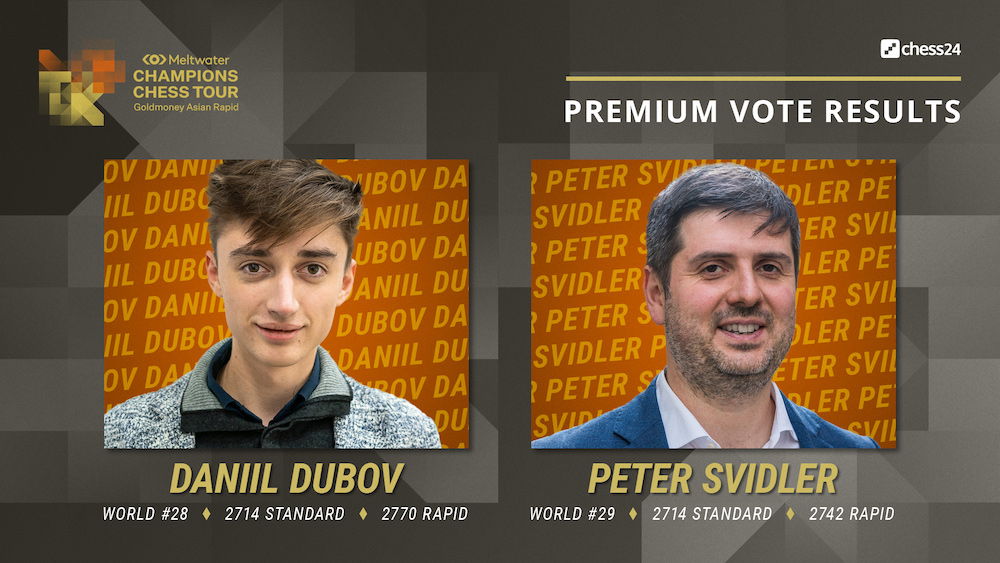 The winners of the public vote by chess24 Premium members were 8-time Russian Champion Peter Svidler, who celebrates his 45th birthday today, and his 25-year-old compatriot Daniil Dubov, whose bold opening ideas and fearless approach have made him a favourite not only of fans but of Magnus Carlsen, who employed him to help in his last World Championship match.

The games will be played online on chess24 at a time control of 15 minutes per player for all moves, plus a 10-second increment for each move made. The 3-day Preliminary stage sees all players play each once over 15 rounds, with the bottom 8 eliminated.

The remaining 8 players then go forward to a knockout, where each 2-day encounter consists of two 4-game matches. If the match score is tied on the second day we get two 5+3 blitz games, and if still tied there’s a final Armageddon game, where White has 5 minutes to Black’s 4, but a draw counts as a win for Black.

When does it start?

The action kicks off on June 26th at 13:00 CEST (16:30 IST), with the earlier than usual start time meaning that the players in Asia — and as many as 9 will play from the Asian continent — don't need to stay up until the very early hours of the morning. It will, however, mean a bright and early 6am start for US Champion Wesley So! 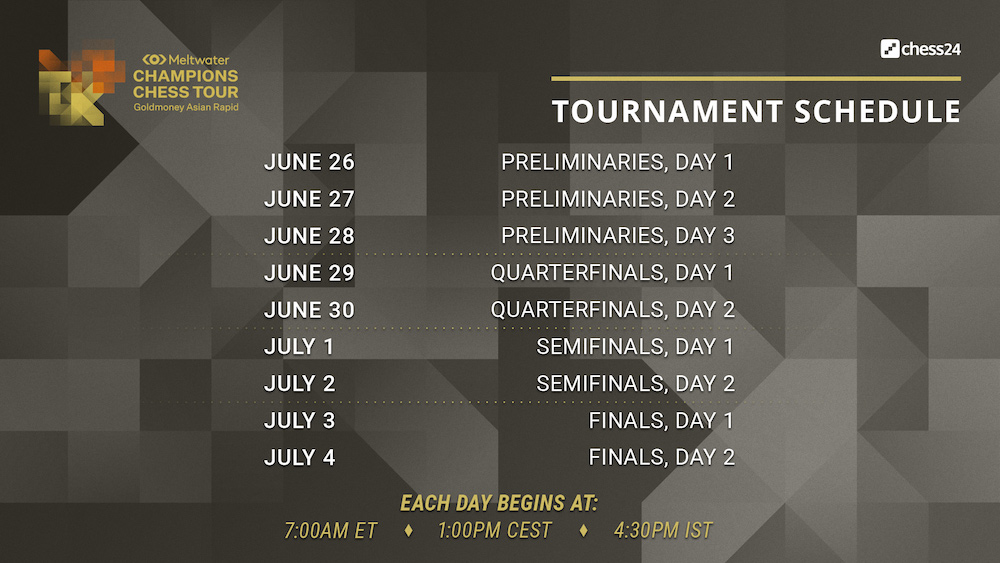 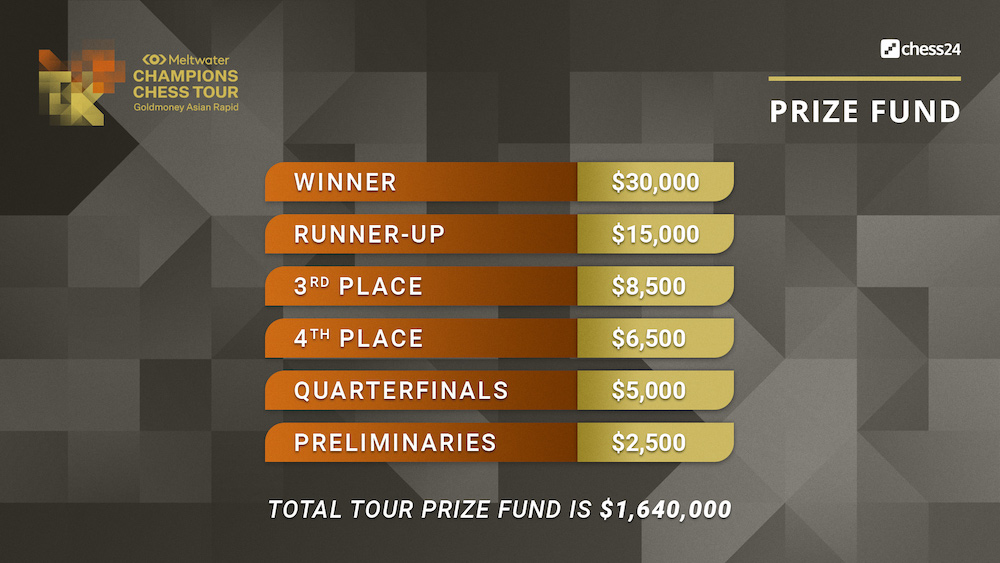 There’s also a maximum of 50 tour points on offer (10 for 1st place in the Preliminaries and 40 for winning the Knockout), which in the absence of Ian Nepomniachtchi, Hikaru Nakamura and Maxime Vachier-Lagrave gives other players a chance to stake a claim for a place in the Tour Finals in September in the Meltwater Headquarters in San Francisco.

Magnus Carlsen tops the tour standings and can't be caught during the Goldmoney Asian Rapid. In fact, after failing to win any of the first four stages of the tour, he's now chasing a 3rd title in a row. 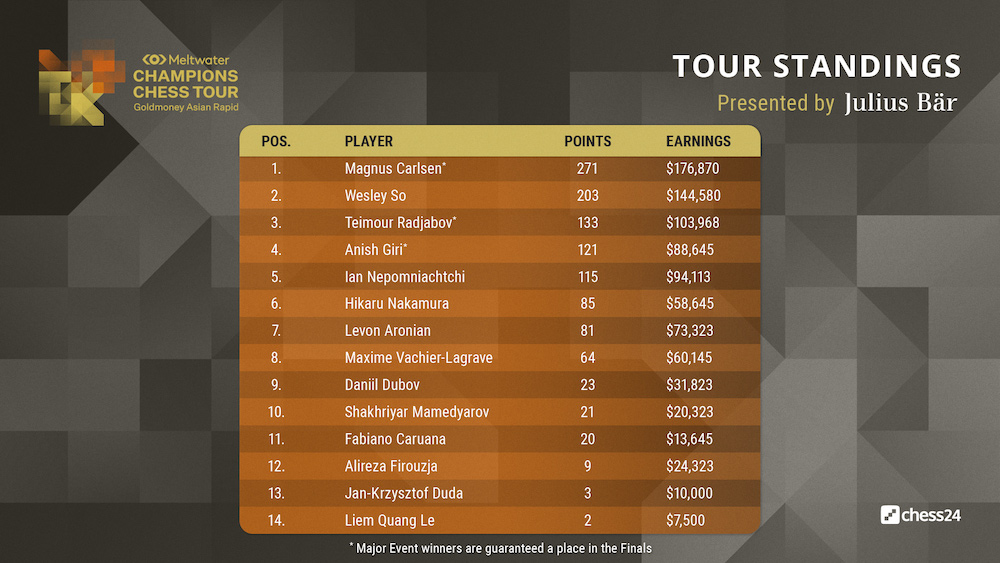 Magnus Carlsen, Teimour Radjabov and Anish Giri have already qualified for the Finals by winning the three Majors, but for the rest there are now just three qualifying tournaments to go, including the Goldmoney Asian Rapid. 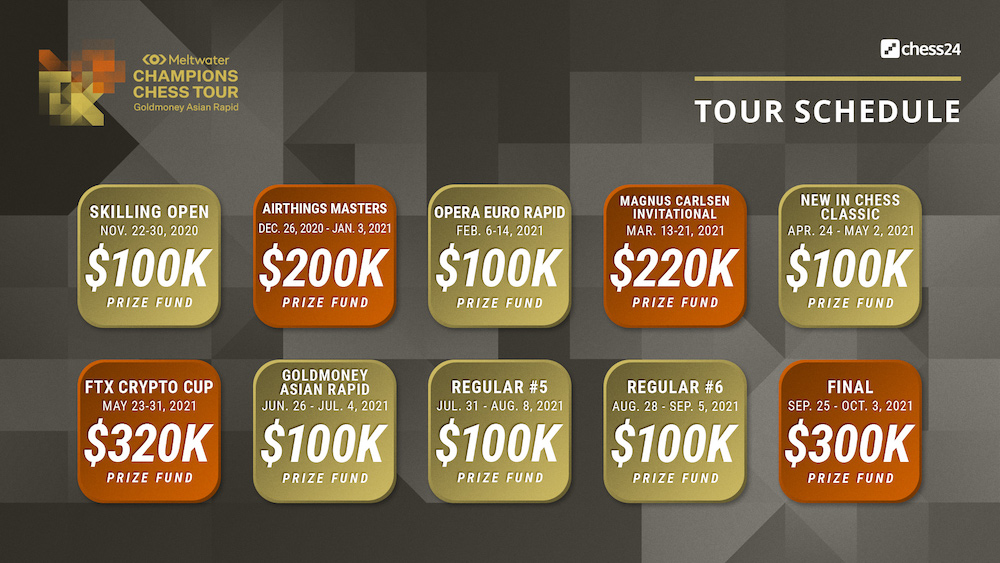 Just as Play Magnus Group is driving innovation to bring chess to a wider audience, Goldmoney is focused on democratizing access to purchasing precious metals through technology. We are excited to partner with Goldmoney, the most innovative name in precious metals.

Chess is a beautiful game which expresses the skill, free will, and intelligence found in human beings. It is a game with a rich tradition spanning at least hundreds of years. Likewise, gold has a rich tradition as an element of great wonder which has served as the premier form of money for human civilization for thousands of years. We are honoured to partner with the Tour, supporting this rich human tradition of chess while introducing the contemporary chess community to the rich tradition of gold and precious metals.

Once again all the action will be streamed live here on chess24 with commentary in multiple languages and catering for different levels of chess knowledge. The action will also be broadcast on TV2 in Norway and by Eurosport around the world. It all kicks off on June 26th at 13:00 CEST!