16-year-old Indian prodigy Praggnanandhaa scored a perfect 5/5 on Day 1 of the Hou Yifan Challenge, including a win over his older sister Vaishali. Pragg was matched for four rounds by Kramnik Challenge winner Vincent Keymer, until US star Christopher Yoo defeated the German in a tense final round of the day. Christopher is in joint third place on 3.5, half a point behind Vincent, but he has a game in hand. The 17-player field means that one player gets a bye each round. 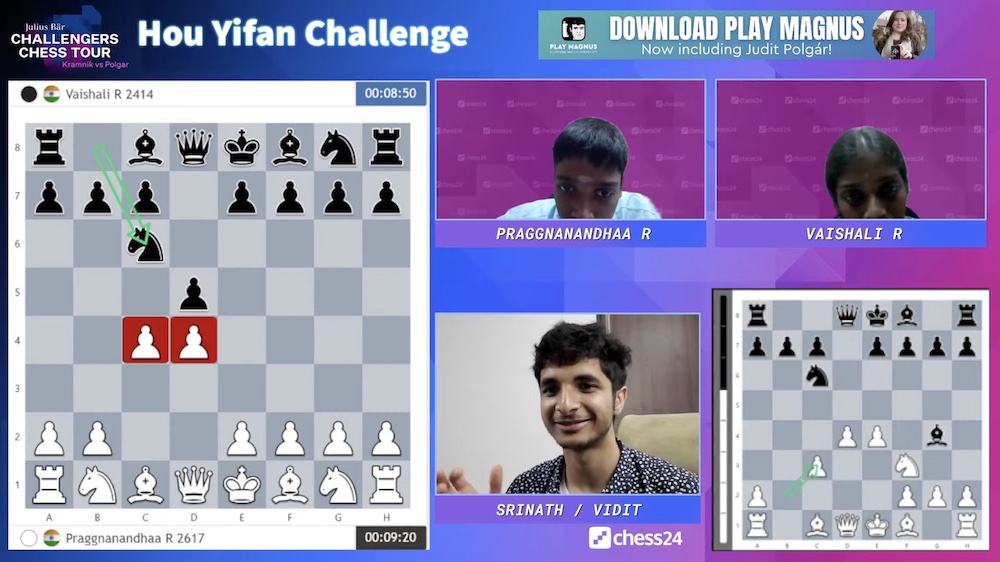 Praggnanandhaa faced his older sister Vaishali, with another star of Indian chess commentating

You can replay all the games from the Hou Yifan Challenge, the 4th event on the $100,000 Julius Baer Challengers Chess Tour, using the selector below.

And here’s the day’s live commentary from Arturs Neiksans and Ellen Nilssen.

You may also want to check out the Indian-focused English stream featuring Srinath Narayanan and Vidit.

You can always select which broadcast to follow from the flags directly under the video on our broadcast page.

Praggnanandhaa won the Polgar Challenge, the first event on the Julius Baer Challengers Chess Tour, and he got off to the perfect start in the Hou Yifan Challenge, the last event before the final. Perhaps the key to his success was the first game of the day, since when he found himself a pawn down against Balaji Daggupati, and a minute down on the clock with just 20 seconds and a 5-second increment each move, things weren’t looking hopeful.

Balaji was much too hasty in swapping off rooks, however, and soon found himself with a bad bishop against fantastic knight.

Black is still a pawn down, but Praggnanandhaa’s king is ready to march into the position on the dark squares and start grabbing pawns. There’s nothing White can do, and the desperate 40.h4?! didn’t help matters as Pragg went on to score a comfortable win.

That set the tone for the day, with Daggupati going on to lose his remaining three games, against Leya Garifullina, Vaishali and Zhu Jiner, while Pragg powered to another four wins.

The second of the day was notable, since Praggnanandhaa was taking on his talented older sister. The sibling rivalry initially looked set to feature a crushing early win for Pragg.

But Vaishali here accepted things had gone badly wrong and managed to regroup with the pawn sacrifice 8…Be7 before actually keeping the game going for 55 moves. It was the last game to finish apart from the 100-move Mishra-Liang, where a missed win for Abhimanyu meant we missed out on White winning all 8 games!

Vaishali’s fighting spirit in that game seemed to help her afterwards, as she won her remaining two games, against Daggupati and Garifullina, with that latter game featuring a powerful attack.

The other pace-setter was top scorer for the Challengers Chess Tour as a whole and the winner of the Kramnik Challenge, Vincent Keymer, who recently tied for first place in the European Championship. He scored 4/4 before a loss in the final round of the day.

Once again the first round was critical, since Keymer faced the player he tied for first with in the Kramnik Challenge, Awonder Liang, and we got an amazing slugfest right out of the opening. Vincent played a line of the Caro-Kann where he sacrificed two pawns, but after 15…Nb4 it seems Awonder was winning.

It may “only” have been played in an online rapid junior event, but what a game!

Keymer went from strength to strength after that, but in the final round of the day he met his match. 14-year-old US star Christopher Yoo could have gone into that game with a perfect 3/3, since he’d spoilt a winning ending in Round 1 against Volodar Murzin in a game which lasted exactly 100 moves.

The Yoo-Keymer game was a heavyweight struggle where Vincent came very close to holding the endgame, but made a final mistake with 43…Kc5. That came back to haunt him after 46…Be5.

That left the standings as follows after Day 1 — note that Yoo, Vaishali, Garifullina, Mammadzada and Daggupati have played one game less. 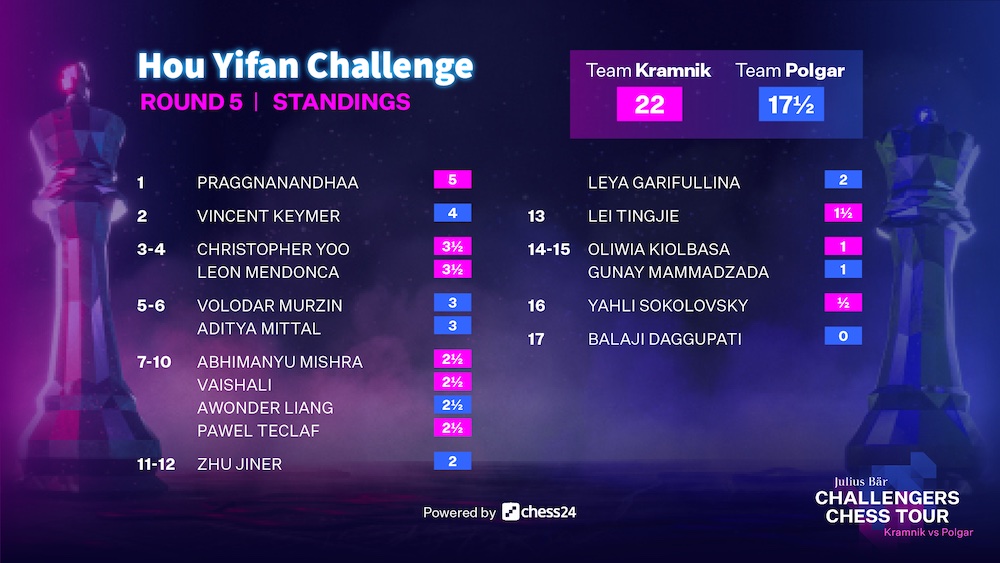 Team Kramnik trail badly in the overall race to earn a trip to Dubai during the Carlsen-Nepomniachtchi match, but they do lead here after Day 1 — only the Top 8 scores are counted for Team Kramnik, as they have one extra player.

The tournament is only beginning, however, with three more days and 12 rounds to go. Praggnanandhaa’s 100% record will be tested in the first round of Day 2, for instance, as he takes one of his key rivals, Awonder Liang.