It’s hard to keep track of a big team event, and we’re guessing most of our readers don’t know their Clichy from their Bischwiller or Mulhouse, so we’ve decided simply to highlight some of the stories from the French Team Championship Top 12 rather than attempt a full summary. We'll take a look at some of the hits (MVL, Ivan Sokolov...) and misses (Arkadij Naiditsch, Sebastien Feller…) from Rounds 2 to 4. 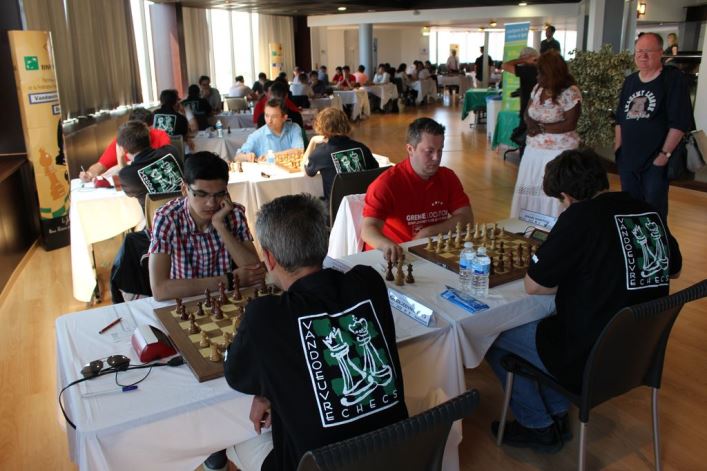 Sometimes it's not so easy to be a 2700-rated player! | photo: French Chess Federation

As we mentioned in our first report, Maxime Vachier-Lagrave had gone 94 days and 27 games without a win, falling from world no. 11 as recently as April to no. 28 in the June FIDE rating list. After winning in Round 1, though, he followed up by playing and winning two more games – a tough and vital game for his team in Round 2 vs. 2633-rated Vladimir Baklan and a somewhat easier win against 2298-rated Sebastien Pucher in Round 4. Of which more later! 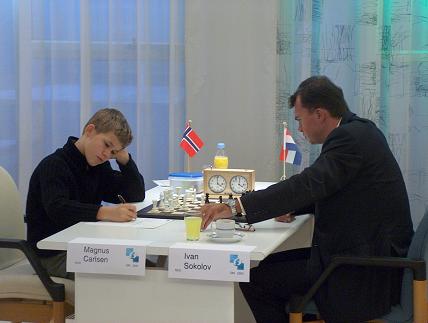 Ivan Sokolov hit his peak rating on 2706 back in January 2004 - later that year he played a promising junior... | photo: Wikipedia

Four games, four wins for the 46-year-old former Yugoslav and Dutch Champion! His biggest scalp was Arkadij Naiditsch in Round 4, but his most attractive game was the win with the black pieces against Evgeny Postny in Round 2:

Queens were exchanged here after 23.g3, but there was no stopping Sokolov’s bishop pair.

In the first report we noted that 17-year-old JK Duda had held the tournament’s top-rated player, Wesley So, to a comfortable draw with the black pieces. He then won his next three games with some very aggressive chess, although in Round 2 he pushed his luck against Sebastien Feller. 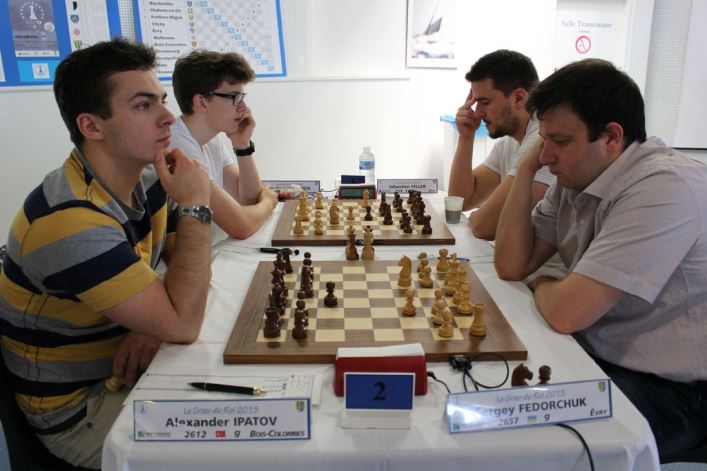 Duda - Feller is the game furthest from the camera | photo: French Chess Federation

For a long time Feller’s advantage with the black pieces was oscillating between 2 and 7 pawns (according to the computer), but play remained very complex and eventually it all came down to this position after 50…d2?:

In Round 1 Duda’s Polish colleague Wojtaszek lost to an IM with Black, in Round 2 he drew with Black, but in Rounds 3 and 4 he had the white pieces and scored two utterly convincing wins. The final position against Sebastien Maze sums things up:

Is Radek Wojtaszek the world’s most difficult player to face with the black pieces at the moment?

In Wijk aan Zee earlier this year he outplayed both Magnus Carlsen and Fabiano Caruana with White and even though he later lost with White to Baadur Jobava and Ding Liren those results couldn’t be attributed to the opening – Vishy Anand’s second simply seemed to have run out of steam after playing the highest number of classical games of any top player in 2014 (107).

In the Russian Team Championship he beat Ian Nepomniachtchi and had Vladimir Kramnik in dire straits before letting him escape. In total Wojtaszek's statistics with White for 2015 read: 14 games with 8 wins, 4 draws and 2 losses.

This was clearly the round of the event so far, with some thrilling games, big upsets (Giri and Naiditsch both lost) and great action even on the lowest boards.

Switch rounds with the selector at the bottom & view any game by clicking on it! 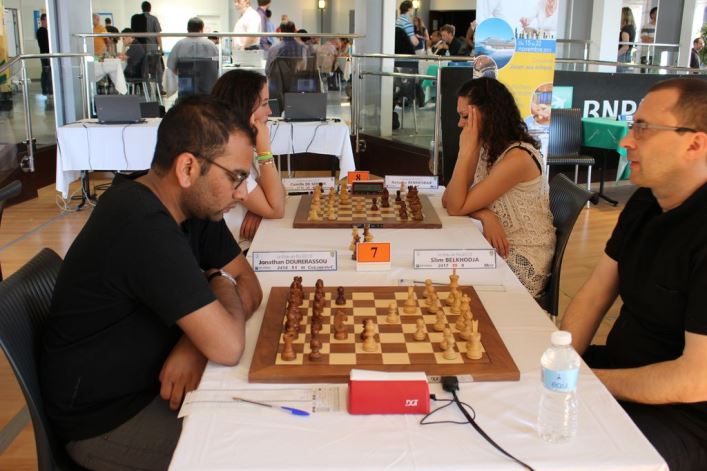 Our heroes are on the second board, but since they're in the photo let's mention that Slim Belkohodja and Jonathan Dourerassou's game also ended in a curious final position! | photo: French Chess Federation

We mentioned in our Round 1 report that Anish Giri, Arkadij Naiditsch and Etienne Bacrot make “a fearsome top three boards” for Bischwiller, but let’s just say things haven't quite gone according to plan for the star names. In Round 2 Giri and Naiditsch both lost while Bacrot failed to beat a 2432-rated IM.

It’s not so often you see someone as “booked up” as Giri all but lost on move 16, but that's what had happened against Yuri Solodovnichenko (2592) after 16.Nc5:

Giri was the only player of the trio to win in Round 3, while in Round 4 he drew in 9 moves (!), while Naiditsch lost again and, after three draws, Bacrot fell to Michal Krasenkow after being outplayed in the opening. Krasenkow’s 30…Rf2! was neat and necessary precision: 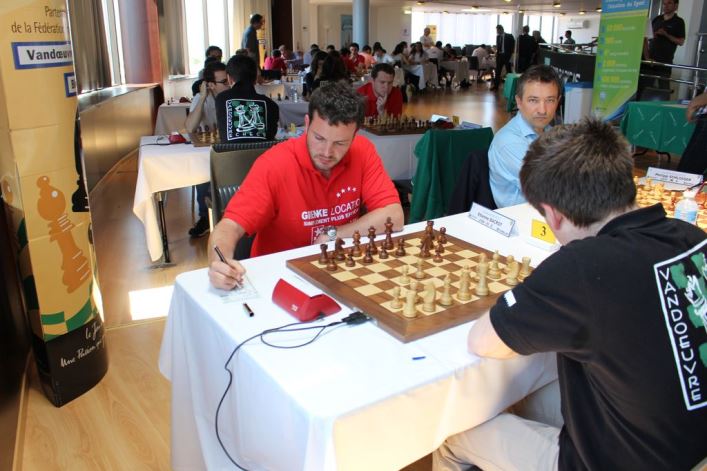 On the other hand, Bischwiller’s lower order has consistently done the job when required. For instance, in Round 2 boards 4-7 stepped up to rescue the day: 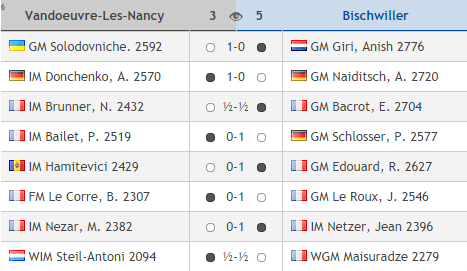 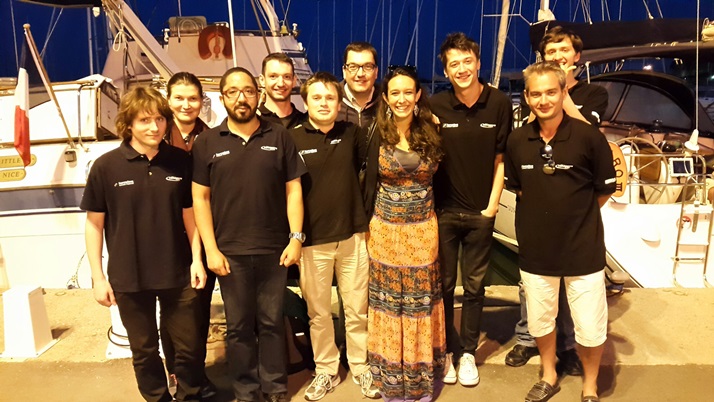 The Vandoeuvre-les-Nancy team weren't too far from pulling off a real shock | photo: Vandoeuvre Echecs website

That explains how Bischwiller are in second place as the only team other than Clichy to win all their matches so far:

It’s tough to come back after a long break from chess, but when you come back with the scrutiny of the chess world on you since you’ve “served your time” for cheating it must make it even tougher. At least Feller has been making any suggestion he’s using computer help in this event seem far-fetched:

The losses to David Navara and JK Duda were followed by a draw against Fabian Doetlling (2588) and then another hard-to-take loss to Brazil’s Alexandr Fier in Round 4. Both players castled on the same side of the board, but it’s fair to say Feller with Black was in slightly more trouble!

One reason Feller stands out is that he’s played top board in all four matches. In the French Team Championship, though, the team order isn't fixed, so in Round 4, for instance, Maxime Vachier-Lagrave found himself down on 5th board playing a 2298-rated opponent.

That even needed some confirmation:

JK Duda, who played on top board in Rounds 1 and 2, was down on 6th board for Round 3, while in Round 5 we now have Wesley So playing IM Anastasia Savina on Board 4.


Actually, it’s not clear whether this is really a miss (but we were lacking some misses!). Of course we'd like to see the best players compete directly against each other, but adding some unpredictability makes it much harder for players to prepare for a specific opponent, which generally means more entertainment for chess fans.

As we said, we’re struggling a bit to find misses, and although Fressinet’s four draws can hardly count as disastrous they’ve cost him 9.6 rating points so far. Perhaps he’s still suffering a hangover from allowing Jon Ludvig Hammer to snatch the chance to play in the Norway Chess supertournament in under two weeks’ time. 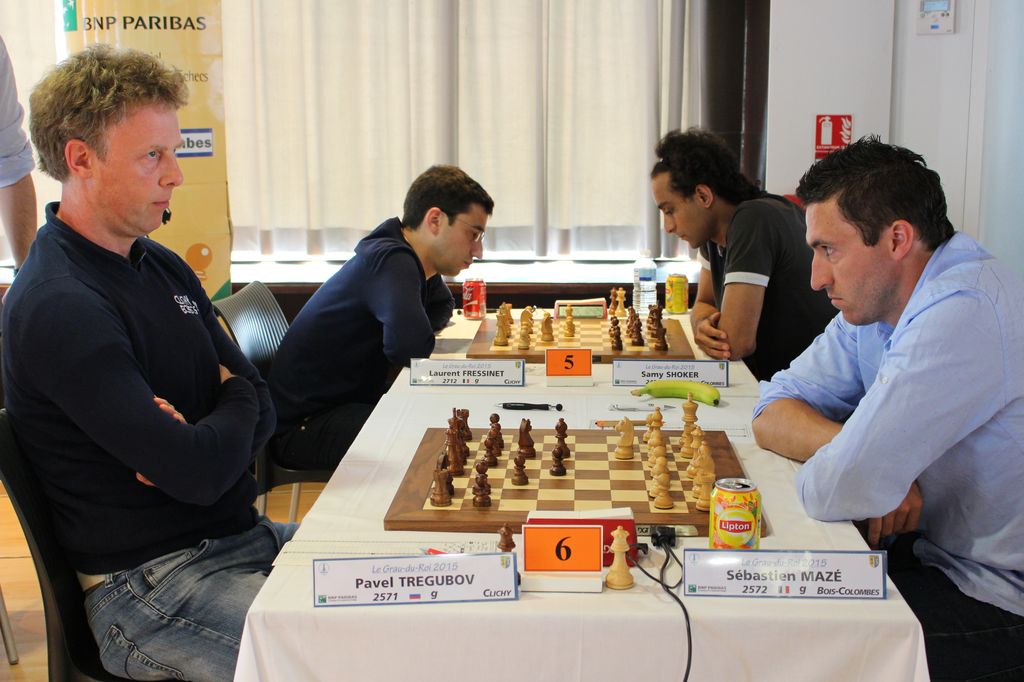 Remember you can watch the remaining 7 rounds of the Top 12 French Team Championship - with by far the best viewing experience - right here on chess24!

You can also watch on our free mobile apps: