Harikrishna won the Chess960 warm-up at the Biel Chess Festival, but the big news is that the 53rd edition of the festival is happening at all. It’s the first top-level international event to take place since the Candidates Tournament was halted midway while Europe went into lock-down. The world is far from back to normal – as Salem Saleh being unable to travel and replaced by Arkadiy Naiditsch testifies – but with plexiglass screens between the players and other measures in place there’s rapid, classical and blitz chess ahead. 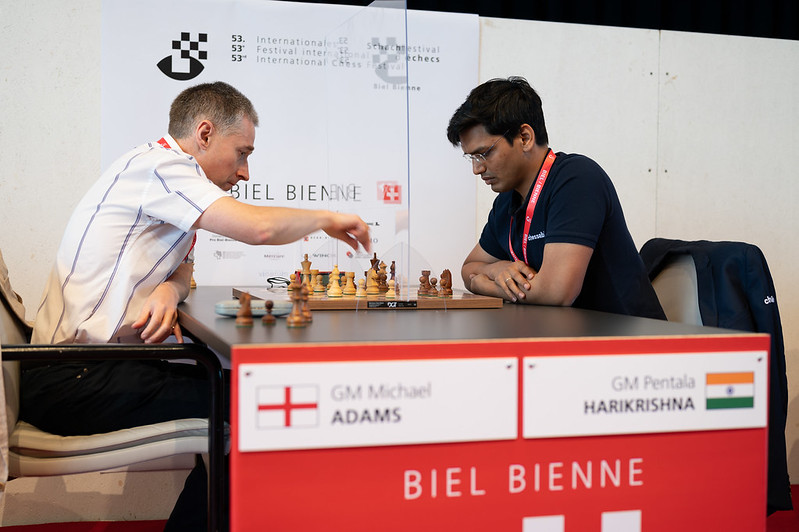 Mickey Adams and Harikrishna with a screen between them | photo: Biel Chess Festival

Watch the main event from 13:00 CEST on Sunday, as it starts with a rapid tournament:

Tournament organisers have gradually been testing out the water for whether over-the-board tournaments are possible again. The Offerspill Invitational in Oslo a month ago featured some strong grandmasters – and World Champion commentary – but was almost exclusively Norwegian. Other events, such as the Spanish Youth Championships, are beginning, though with serious precautions:

It’s currently mandatory to wear masks even outside in Andalucia, where that event is taking place, while in Switzerland the organisers have left masks or gloves at the discretion of the players. Instead, apart from checks for obvious symptoms, the board and pieces will be disinfected regularly, while social distancing will be enforced. 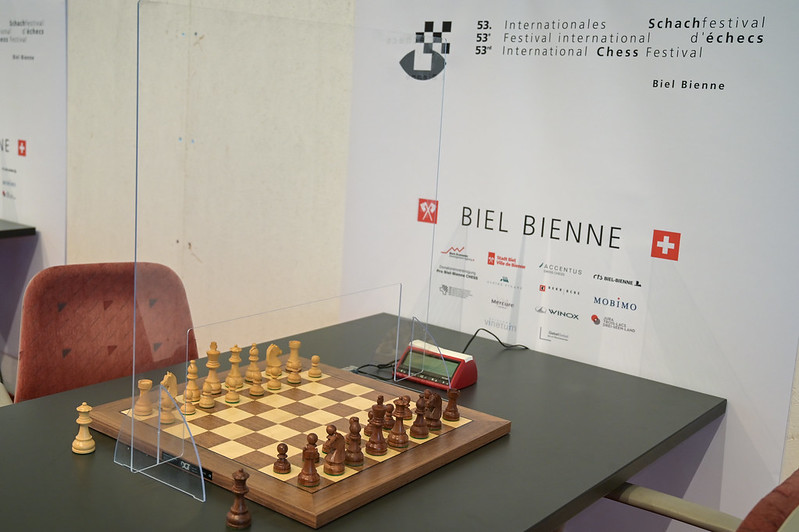 The players will have to be a little more careful making their moves than usual! | photo: Biel Chess Festival

The regulations make it clear that players are playing at their own risk, though as far as we know they don’t actually include this clause!

Biel traditionally features a major open and multiple smaller events accompanied by an elite tournament, but while the other tournaments have had to be reduced this year the top event is back, with the 8-player field featuring four 2700 players. Salem Saleh was originally expected to play, but at the last minute found he was unable to leave the United Arab Emirates. For the main tournament he’ll be replaced by Arkadij Naiditsch, while for the Chess960 rapid opener on Saturday he was replaced by Alexander Donchenko. 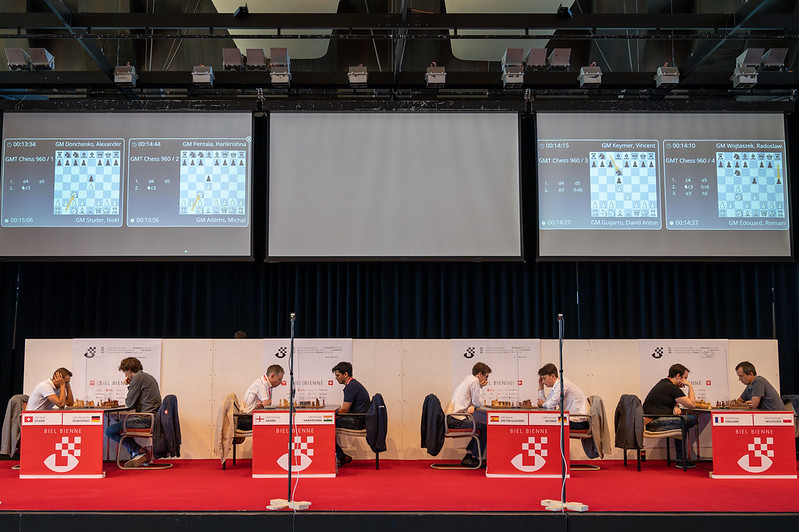 Chess is back on stage and not just a big screen | photo: Biel Chess Festival

You can replay the Chess960 games by clicking on any result in the table below, or hover over a player's name to see all his results:

15-year-old Vincent Keymer catches the eye there. The German prodigy, coached by Peter Leko, lost just one game, to Donchenko, who won’t play the main event. The shock twist at the end was joint favourite Radek Wojtaszek losing in the final round to local hero Noel Studer, who had previously lost all six games.

Harikrishna, Keymer and Wojtaszek took the top spots - it seems Vincent is not only growing at the chessboard! | photo: Biel Chess Festival

The result in the Chess960 is only a tiebreaker, if required, after the main event – which is where things get complicated! The players first play 7 rounds of rapid chess on Sunday (with 2 points for a win and 1 for a draw), then have a day off, then come back for the first 4 rounds of classical chess (4 points for a win, 1.5(!) for a draw), then play 14 rounds of blitz in a day, and then play the final 3 classical games after a rest day. The points for all those disciplines are combined and should be correctly calculated live here on chess24.

Tune into the live broadcast from 15:00 CEST!