Alexander Grischuk, David Navara, Yu Yangyi and Daniil Dubov are through to the quarterfinals of the Hamburg FIDE Grand Prix after winning Round 1 tiebreaks. The first three players needed just two rapid games to beat Radek Wojtaszek, Nikita Vitiugov and Dmitry Jakovenko, but in the other match it looked as though Teimour Rajdabov would continue his brilliant knockout form when he had a winning position in the 2nd game. Instead Dubov escaped and the match would have gone all the way to Armageddon if not for a dramatic late blunder by Teimour. 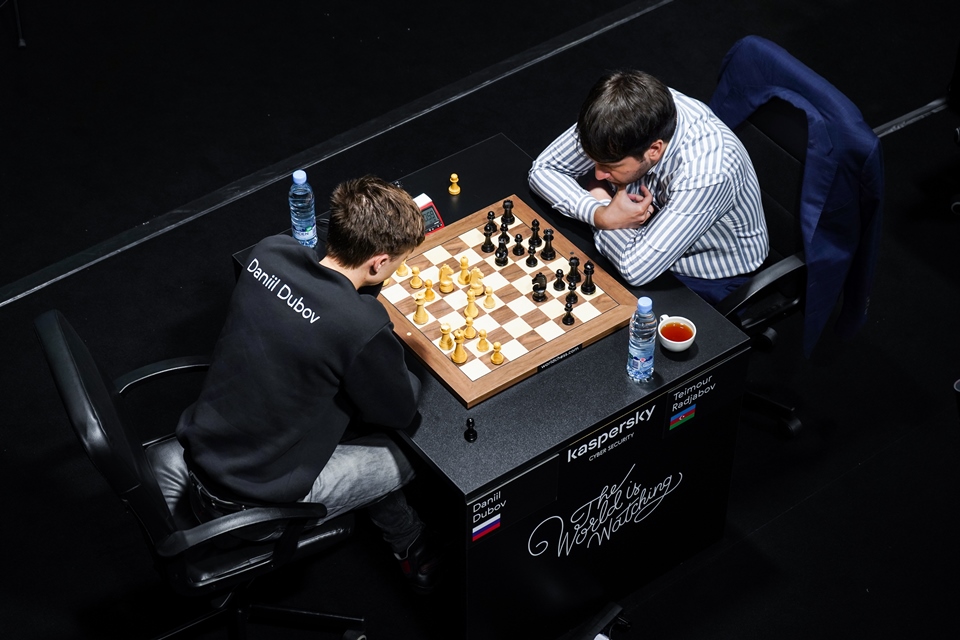 You can replay all the Hamburg FIDE Grand Prix games using the selector below:

The highlight of the FIDE Grand Prix series this year has arguably been interviews by Alexander Grischuk, and this time round he didn’t disappoint either. He explained his approach to the tiebreaks against Radek Wojtaszek:

It was an incredibly tough match. In the first two games Radoslaw completely killed my openings and then for the rapids I just decided to play anything to avoid preparation, just play some shit basically!

Grischuk described the first game as “more or less normal”, but the second was a return to the wild action we’d seen from the two players in the first classical game. Grischuk played the King’s Indian Attack, but noted a psychological difference compared to playing the King's Indian Defence with Black:

The danger was real, with Radek saying afterwards, “I felt like I should do something more active”. The biggest chance came after 24.Qxe3: 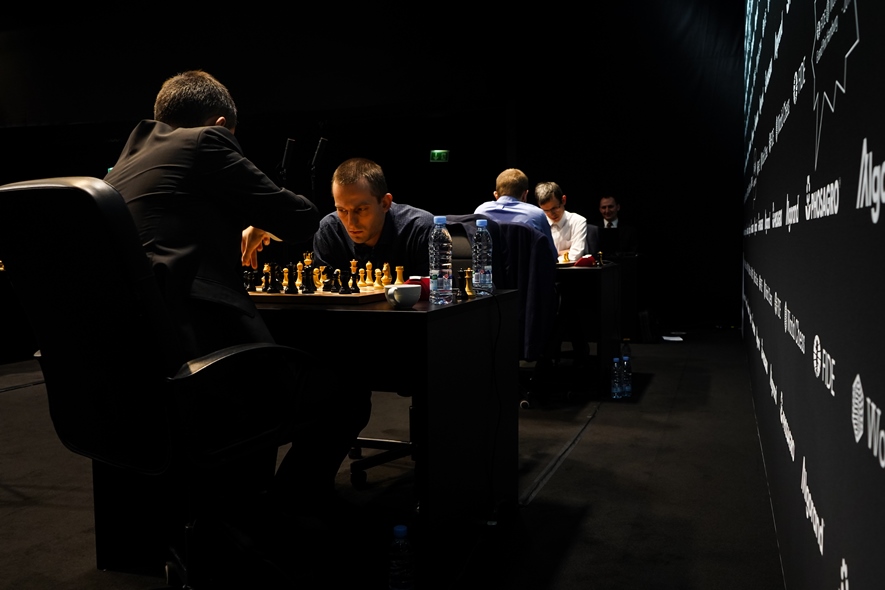 In the game after 24…Nxe5 25.Nf5 Rg6 26.Re2 Grischuk was gradually able to consolidate, and when queens left the board he went on to win smoothly. That meant that with 11 points so far Grischuk is now leading the “live” Grand Prix standings, but as this is his last event he’ll need to at least beat Navara in the quarterfinals to have a decent chance of qualifying for the Candidates. 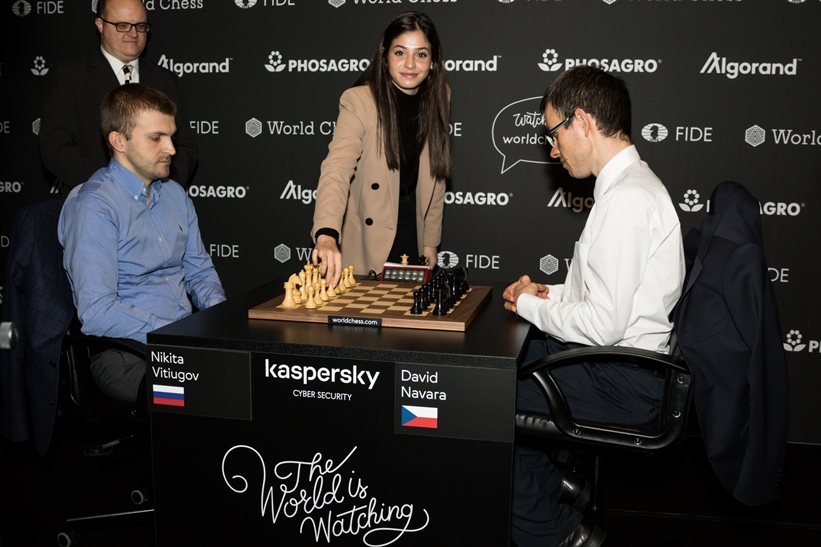 David Navara commented on his expectations before the match against Nikita Vitiugov:

I considered him a favourite in classical chess, but in rapid we both had chances.

So it proved, with the first rapid game a complicated, double-edged struggle. Navara, who had Black, revealed afterwards that giving up the a5-pawn had been a sacrifice (Vitiugov wasn’t sure if it was a blunder), but that he’d then found a hole in his planned follow-up. Both players felt Nikita going after a second pawn on h5 was risky – it opened up the h-file and Black’s position was easier to play – though there was a chance for White:

Nikita complained that his b5-knight was out of play, but 28.c5! here would have given it the d6-square, with the threat of a fork from f5 – against the same play as in the game the white knight is just in time to thwart Black’s plans. Instead after 28.e4?! Reh8! 29.Qf5? Qxf5 30.exf5 Rxh2 it turned out that the queens leaving the board had done nothing to stop the mating threats against the white king. Nikita could only hold on for 7 more moves until, about to lose a rook, he resigned.

Vitiugov played the Dutch in the next game and succeeded in creating chaos on board, but objectively White was always better and David went on to win again. Afterwards Nikita showed more of his now trademark philosophical approach to setbacks, crediting his success in the World Cup, the Grand Swiss and the European Team Championship in part to the fact he hadn’t won a match, or even a game, in his three Grand Prix events (he lost to Svidler in Moscow and Grischuk in Riga):

Yu Yangyi has only 1 Grand Prix point, but with this event and Jerusalem still to go he’s a potential dark horse for Candidates Tournament qualification – when we’d have three Chinese players in the 8-player field! There’s a long way to go before that becomes a realistic prospect, but Yu Yangyi was able to shrug off missing a win in classical chess the day before to win the first rapid game against Dmitry Jakovenko. He credited his “homework”, as he identified a bold and tempting knight move by his opponent as “a slight mistake”. Soon a heavy piece ending was reached where White took full control of the 7th rank, and this time Yangyi made no mistake. 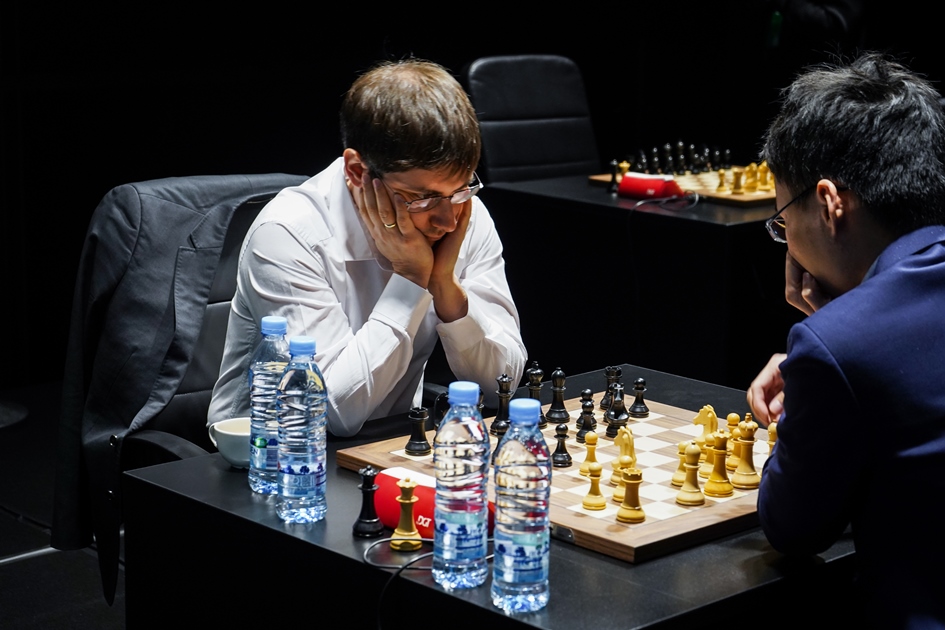 The second game saw Dmitry come within a whisker of levelling the scores:

54.Be5!, with the threat of Qe7+ and Bf4+, is a quiet killer, but after 54.Rc5?! Re6! (preventing this move is another virtue of Be5) the worst was over for Black and Yu Yangyi went through to play Jan-Krzysztof Duda in the quarterfinals. 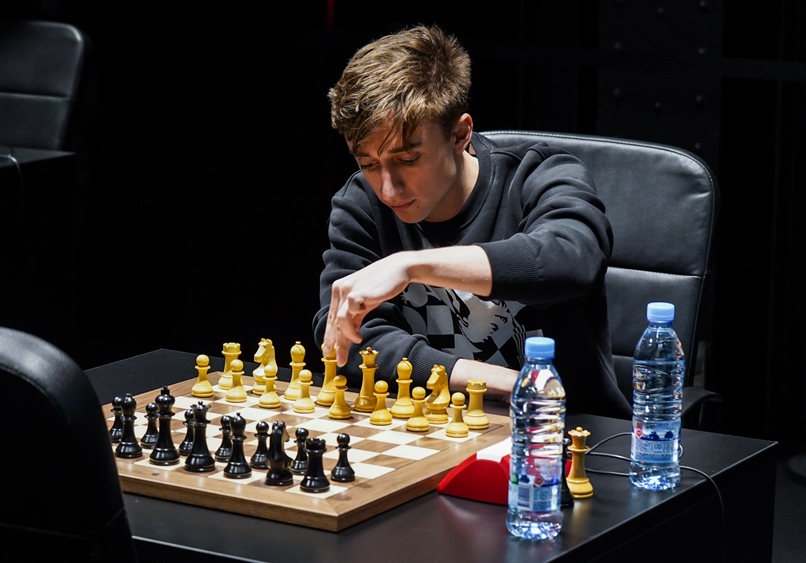 Dubov was a wild card for the Grand Prix and has more than justified his selection | photo: Valeria Gordienko, official website

That leaves Dubov-Radjabov, which after classical draws in 12 and 18 moves saw the first rapid tiebreak drawn in 15. We needn’t have worried, however, since the next encounter was a 74-move thriller. Teimour Radjabov looked to have booked his place in the next round after he spotted a simple trick:

20.Bxd6! not only won a vital pawn but threatened Bc7 next, since 20…Rxd6? loses to 21.Re8+ Bf8 22.Qh6 Nd7 23.Ng5 and Black would have to give up his queen to stop mate. In what followed, however, Dubov showed great resourcefulness, and even if Radjabov missed a one-move knockout as late as move 46 it was ultimately Black making a draw from a position of strength. 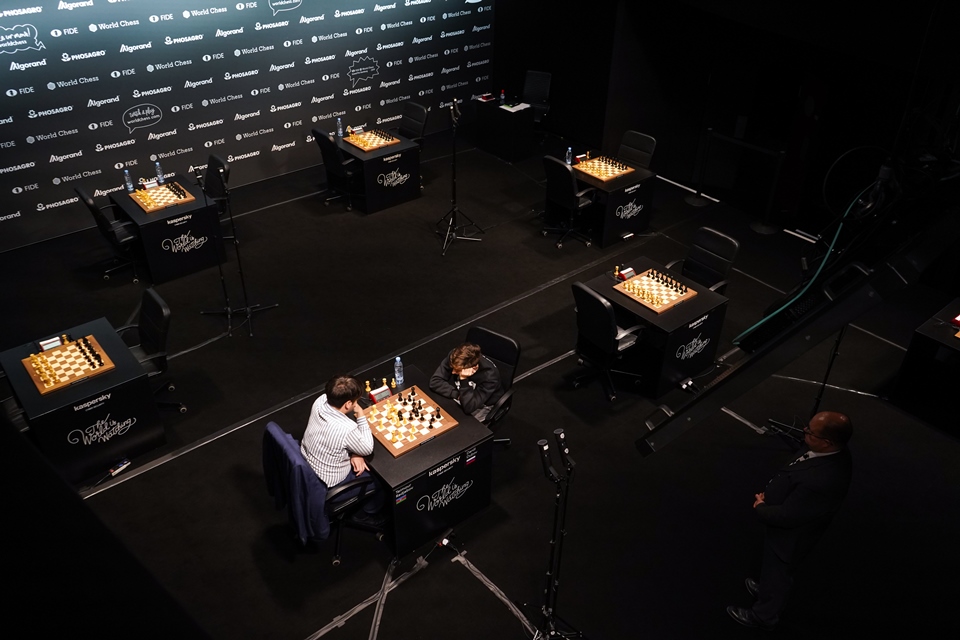 Radjabov again failed to convert a strong position in the first 10-minute game, and after a quieter second the match had gone to 5-minute blitz. Dubov played the Modern Defence with Black in the first game and managed to win with a devastating attack on the kingside and in the centre.

That made it a must-win situation for Teimour, who drew on all his World Cup winning experience to allow Dubov a huge space advantage but then strike back. Even a spectacular queen sacrifice from Daniil couldn’t alter the course of the game, and it all eventually came down to one dramatic moment:

That took Dubov through to play Peter Svidler in the quarterfinals, with the only quarterfinal we haven’t mentioned yet being MVL-Topalov. Both those players won their matches in classical chess. 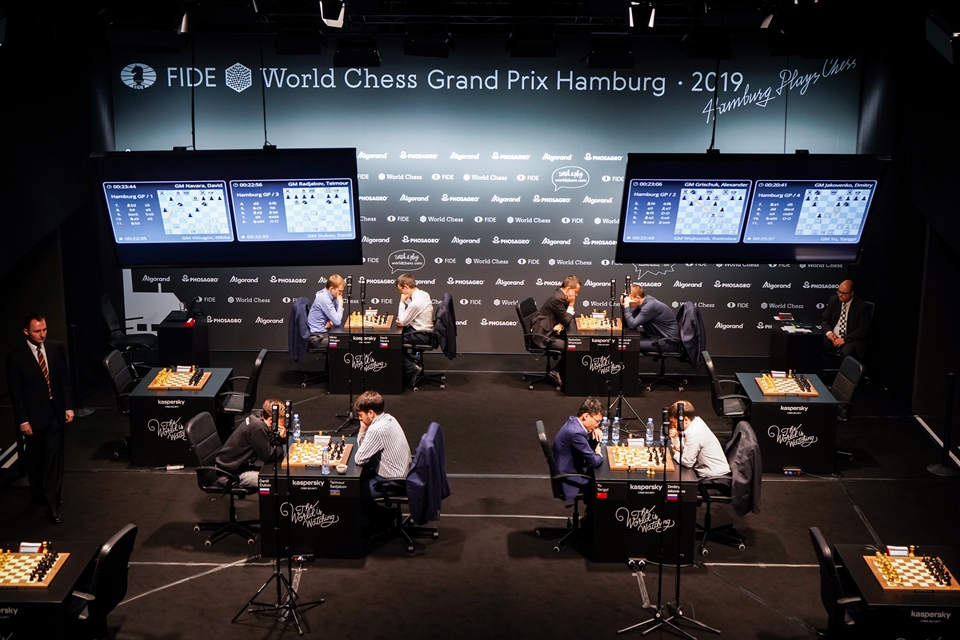 The other four tables can be removed now, as we're down to just eight players! | photo: Valeria Gordienko, official website

There’s no rest day before the quarterfinals, so the action starts again at 15:00 CET on Friday. Watch all the games live here on chess24!